Op-Ed: The problem of being Wild and a Wanderer 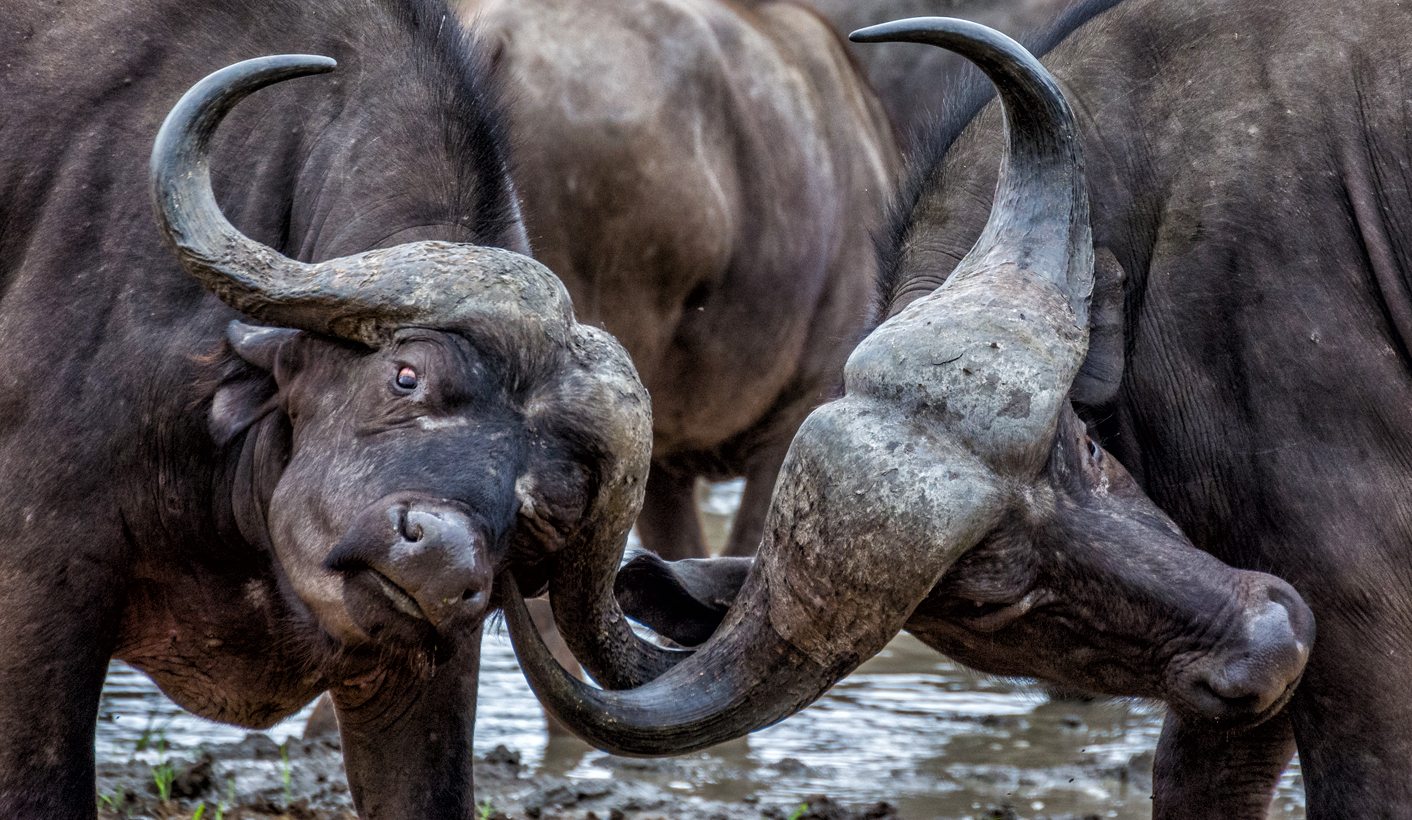 Who owns South Africa’s wild animals? It’s a question of life and death for many creatures that wander out of the Kruger National Park across unfenced boundaries with some adjoining private reserves. By DON PINNOCK.

Trophy hunters are shooting animals that walk across an unfenced boundary between Kruger Park and some private reserves. As they step over the invisible line, their status apparently changes from res publicae (owned by us all) to res nullius (owned by nobody) and trophy hunters are shooting them. This has been going on for many years – ever since 1993 when the fences came down between Kruger and private reserves such as Timbavati, Balule, Klaserie and Umbabat.

For obvious reasons, it isn’t something animal-loving tourists are told about. When a hunt is on in what are collectively the Associated Private Game Reserves (APNR), the game-drive vehicles get a warning and stay away. Quotas include elephant, rhino, buffalo, lion, leopard, waterbuck, zebra, kudu, hippo and warthog.

Since it was first sanctioned by an agreement between Kruger and APNR, the trophy hunting by largely foreign hunters of animals that can move freely from Kruger has raised the ire of conservationists and some politicians.

United Democratic Movement leader Bantu Holomisa put his finger on the issue when he wrote: “Surely we cannot condone the destruction of a national asset for the commercial gain of a private institution and the pleasure of a select group of rich hunters.”

According to Kruger and APNR officials, it’s not only condoned but also perfectly legal, agreed on in a memorandum of understanding between the two parties. Within what are called “contract parks”, sustainable resource use such as hunting and harvesting are permitted. At the time, SANParks CEO David Mabunda said the agreement was “to keep the land in a state that is compatible with the maintenance of wildlife … our policy is open to the sustainable use of natural resources”.

Res nullius – which both Kruger and APNR officials claim as the basis of the agreement – is derived from ancient Roman law and applied to any object or land without rights. It encompasses wild, unfenced animals, abandoned property and, in the form of terra nullius, was used by Western colonial powers to claim whole countries.

In South Africa, an animal’s wild freedom ends the moment someone encloses it within a fence or pen or shoots it. In that instant it becomes private property. When the fences came down between Kruger and its western neighbours, however, the unintended consequence was that the private reserves were contained within a larger area safeguarded by the Protected Areas Act and, arguably, the law of res communis – in the public domain as a common heritage to humankind.

Although custodians on either side of the removed fences are at pains to explain that animals do not cross the now merely juridical boundary, they clearly do, as several scientific studies have proved. Elephants and male lions range far and ungulates like buffalo and wildebeest migrate with the rains. So are trophy hunters in the APNR shooting animals that are national assets?

Before the fences came down, in terms of the law the private reserves owned the animals on their property. A large part of their income was derived from hunting. It’s in fact probable that for a good number, their decision to become reserves was predicated on their ability to maintain themselves on this basis, although many of them now have exclusive tourist lodges.

In 1991, however, the concept of res nullius was radically altered by the Game Theft Act. It holds that if your fenced game escapes, you still own it. It also says that if you lure game from someone else’s property you’re guilty of an offence.

This muddied the water of ownership considerably. In terms of the Act, wild animals that wander into Kruger from APNR land no longer belonged to Kruger. But the reverse is also true. And because Kruger is controlling numbers by shutting down waterholes, the more abundant APNR waterholes could be said to be luring game which is liable to be hunted. But maybe this could be labelled as unintended consequences.

And there’s another problem. Because hunters prefer and pay more for the biggest and best, it’s been argued very strongly by biologists that this weakens the gene pool and reduces the viability of the species. Whereas culling reduces a total population, in trophy hunting only the fittest are eliminated. And to bag them, hunters have been known to cheat.

APNR chairman Mike Anderson said he was not in a position to divulge the current off-take numbers, which are not publicly available, but a report from 2009 revealed a quota which included 55 elephants, 144 buffalo, 5003 impala, 19 kudu, two lion and one leopard. It is apparently not that high now.

If I appear to be building a case against hunting in the APNR, however, there’s another side to the story. While about 7% of South Africa’s surface is national or provincial parkland, 8% of conserved wilderness is in private hands. Paradoxically, any wild land that’s fenced needs to be managed in order to maintain its wildness. And, particularly with the present levels of poaching, this is hugely expensive.

According to Anderson, hunting revenues are used to sustain the environmental integrity of the parks and for community outreach programmes. An APNR statement warned that a ban on hunting in its area would result in a reduction of anti-poaching patrols and the closure of ecological research and community support projects. It could also lead to a re-erection of boundary fences or a deproclamation of land as reserve.

“Hunting is a dirty game,” said Balule warden Craig Spencer. “It’s like a secondhand car dealer business. You get some bad lemons who cheat and hunt beyond the quota. But rangers don’t like hunting. It’s not a great policy to burn your furniture to heat your house. On the other hand it’s like a bank. You see there’s a road to be fixed and you figure it will cost about one-and-a-half buffaloes.”

However, the position of Sabi Sands, a Kruger-linked reserve not part of the APNR, raises questions about dire predictions of closure. No hunting takes place there.

“The reason we stopped,” said Jurie Moolman, who owns Djuma within Sabi Sands, “was that it was too disruptive. Not just because of commercial operations but, for example, because you knock over a dominant lion and you have cascading consequences in the pride.

“I’m not against hunting in general. People don’t appreciate how much of this country is preserved for wildlife because of hunting. Not hunting in Sabi Sands is costing us. We have to raise all our income from just the gate, beds and levies.

“With the cost of anti-poaching we really should do trophy hunting. Its absence means we have to squeeze money out of members like myself. But trophy hunting’s not going to happen. We’ve got used to the idea that the animals don’t belong to us.”

As it usually does, debates around conservation end at the doorstep of costs. “The goal of everybody in the APNR is to conserve nature, to look after it,” said Marco Schiess, who owns Umlani Bushcamp. “Personally, I don’t like hunting but I can’t see an alternative. If you seek to reduce hunting within Timbavati, the collective will say: ‘If you can find another way to supply conservation revenue then go for it.’ They have a point. Hunting seems the only answer. Without it members’ personal levies would have to go up.”

As things stand, it appears that we humans may have to kill wild animals to save them and to fund biodiverity by culling them. It’s an argument that sustains trophy hunting as it’s maintained there’s no alternative. It is however a moot point whether wild animals need to die to fund the lifestyles of a privileged few. For the time being, Sabi Sands seems to have found another way. DM