Op-Ed: 40 years after the Soweto uprisings, is SA reverting to a repressive state? 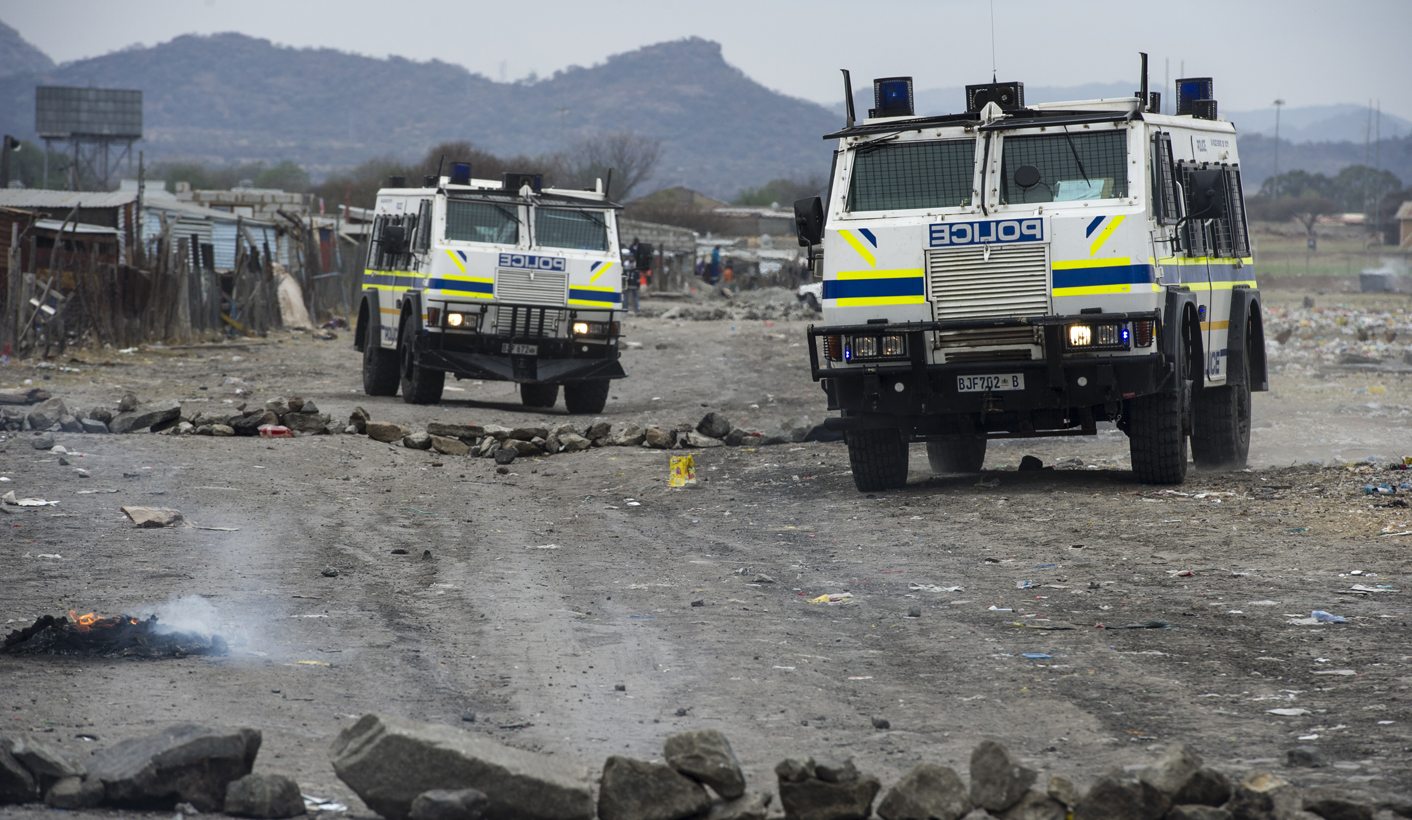 Since the Marikana massacre in 2012, several journalists, academics and media commentators have argued that South Africa is reverting to a repressive state. Some have even used the term “police state” to describe post-Marikana South Africa. By JANE DUNCAN.

This is hardly an edifying description for a country that actually was a police state four decades ago, and one that was responsible for the Sharpeville and June 16, 1976 massacres, among others.

But what is not well understood is that contemporary South Africa is unlikely to descend into full-blown repression, as the state does not have the capacity to repress on a broader scale. As a result, there are unlikely to be more Marikanas in the sense of an organised, armed assault on protesters. However, the possibility cannot be ruled out that state violence could occur as an unplanned reaction to particular events.

While there are clear and well acknowledged legal limits on the state’s ability to use violence, the political limits, and more specifically the limits imposed by popular agency, are less well acknowledged.

Arguably, the social and political conditions that would allow the state to use ongoing (as opposed to sporadic) violence do not exist in this current conjuncture, as the balance of power is shifting gradually towards popular movements outside the ruling ANC alliance and its backers.

The security cluster seems to realise this, and in response is shifting away from overt, visible repression (like massacres) towards less visible, more pre-emptive forms of repression. There are three signs of this shift.

The first sign is that intelligence work has become increasingly important to stabilising social relations. Surveillance provides the state with a politically low-cost form of social control, as abuses are very difficult to detect. It is difficult to tell whether South Africa has followed the global shift away from human intelligence to signals intelligence – as intelligence work is so secretive – but it would be unsurprising if it has.

The South African Police Service (SAPS) has embraced intelligence-led policing for several reasons. Police violence is eroding trust between the police and communities, making it more difficult to revert back to community policing, even if they wanted to. Yet at the same time, SAPS cannot risk many more high profile shoot-outs with protestors, as the long-term political costs will simply be too great.

So, it stands to reason that the SAPS would search for a policing model that still allowed them to contain dissent using a less politically-risky approach, and intelligence-led policing provides just such a model.

The third sign is an increasing use of pre-emptive methods of containing protests through manipulations of the Regulation of Gatherings Act (RGA), to stop more protests from spilling out onto the streets in the first place.

In a research study I led on the right to protest in 11 municipalities – and which involved the physical collection and logging of municipal data about gatherings and protests over a five year period (2008-13) – none of the municipalities studied received a clean bill of health.

In spite of the fact that the municipal and the police data on protests point to the majority of protests take place peacefully and uneventfully (which is not the dominant image of protests either in the media or the public imagination), all the municipalities surveyed instituted unreasonable restrictions on protests. This they appeared to do to reduce the number of protests by making increasingly difficult for people to exercise their right to protest “lawfully”.

The fact that South Africa’s rulers have found it necessary to shift from more visible to less visible forms of social control at all, is not a sign of their strength; rather it is a sign of their weakness as they recognise the fact that they lack the capacity to repress openly.

The reason why this is so can be explained with reference to Italian Marxist Antonio Gramsci’s concept of an organic crisis. An organic crisis develops when popular capacity for action increases and more people can be detached from the ruling hegemonic block and be convinced to side with the oppressed and exploited classes.

South Africa is manifesting more elements of a classic Gramscian organic crisis, which means that its rulers can move neither forwards nor backwards easily, as their grip on power is so fragile.

The police and municipal data suggest that popular capacity for action is increasing. In fact, when the South African protests are viewed in a global context, it becomes apparent that these increases are being sustained in the sense that they can be viewed as part of a broader protest wave responding to crises in the global capitalist economy.

This means that the South African protests are of world-historical significance, which makes it likely that not only are they capable of being sustained, they are also likely to intensify. Many have extracted significant concessions from ruling elites, shaking the state in the process, which underlines their potential to move in an anti-systemic direction. This is because the protests build confidence in the power of collective action, and consequently have the potential to extract even more significant concessions in future.

The municipal data points to new political actors taking to the streets and new organisations being formed outside the ANC hegemonic bloc. In fact, while the protests cannot be said to have a distinct ideological character, the data points to the hegemony of the ANC diminishing.

This does not support arguments advanced by political analysts Susan Booysen and Ebrahim Fakir that the protests are merely about holding the ANC to account. Rather, the data suggests that more communities are becoming subjectively available for alternative politics to that offered by the ANC alliance.

With respect to Gramsci’s two other conditions for an organic crisis, the neo-liberal phase of capitalism has entered a period of organic crisis in several regions of the world. In the case of South Africa, while the Zuma administration promised a more redistributive state, the objective conditions at the time it came to power (during the global recession) did not favour radical redistribution. These harsh realities placed constraints on the administration’s ability to offer significant concessions.

With respect to the state’s ability to repress easily, Marikana hastened political shifts that have been under way for some time now. Significantly, the massacre has not dampened protest levels: to that extent, it has not been a particularly successful massacre for the ruling elite.

The massacre was a precipitating factor in the formation of the Economic Freedom Fighters (EFF), and Cosatu’s largest affiliate, the National Union of Metalworkers of South Africa (Numsa), has been expelled from the federation, spurring it on to form a United Front in collaboration with community organisations and social movements. The state cannot risk going down even further down this path.

Violence against dissenters on a mass scale is likely to eat into the ANC’s still-considerable legitimacy, and hasten its slow but steady demise at the polls. This is especially so if a national movement comes into being that generalises protesters’ demands, and relates them to the neo-liberal system of governance.

Workers and the poor, who face the brunt of the system, are increasingly unlikely to consent to supporting and funding their own oppression, and the most successful repression occurs when there is consent for repression. This means that there are popular limits on the state’s ability to use organised violence, as doing so may well intensify popular action rather than dampen it.

There are also not insignificant divisions in the political elite, including in the security cluster itself, and a unity of purpose is necessary for successful repression. Furthermore, in order to repress openly, the police would probably need the assistance of the military. But the military is industrialised and unionised. There is evidence that a significant number of soldiers have a consciousness of themselves not just as soldiers, but as workers, who are exploited like other workers.

In view of the military’s industrialisation, the political elite face a gamble: if the current administration put soldiers in front of exploited, protesting workers (like the soldiers are), and told them to shoot, what would they do? What if they refused? Can they really risk a rebellion in the military, which really would amount to mutiny? The political risks could be too great for them to gamble on the military.

The more historically aware security officials are also likely to make political calculations about how long they will last if they intensify open repression. As the embarrassingly weak presidency of Jacob Zuma splutters to a close, the ignominious fates suffered by the likes of Saddam Hussein and Muammar Gaddafi could well be top of mind when they attempt to weigh up the long-term political costs of engaging in an all-out defence of their positions. Regimes that relied on repression to maintain power have never lasted.

It is not coincidental that since 2009 – the year Zuma came to office – evidence has mounted of some even resorting to political assassinations to silence their critics, especially in Mpumalanga and KwaZulu-Natal.

But resorting to informal repression is itself an indication that more violent sections of the political elite recognise that they cannot engage in open repression. Convictions of those responsible (and there have been some) make it less likely that political assassinations will escalate into unstated state policy, although as the country heads up to possibly its most fractious local government elections yet, it would be naïve to ignore that the risks are there.

South Africans may be tempted to wallow in what Irish political scientist Lawrence Cox has called “repression horror”, fully expecting that in future, state violence against protests will become the order of the day. While overstatements about the power of the state’s coercive capacities are understandable in the wake of Marikana, they are not helpful, as they can instil fear and political paralysis.

We should not allow emotional responses to override the need for dispassionate analysis. Repression horror can lead to movements seeing the state as omniscient and omnipotent, even when this is, in fact, not the case.

No matter how powerful the men and women with guns seem, there are important signs that they are actually quite vulnerable, and the shifting modes of state repression point to this. In spite of fact that the current political moment seems so dark, the political space is wide open, and is actually pregnant with great promise. DM

Jane Duncan is a professor in the Department of Journalism, Film and Television at the University of Johannesburg. This article is based on her professorial inaugural lecture, and the full text is available here. She is author of ‘The rise of the securocrats: the case of South Africa’ (Jacana, 2014), and her latest book, ‘Protest Nation: the right to protest in South Africa’, will be published by UKZN Press later this year.

Photo: Nkaneng, Marikana, South Africa, burning and rock barricades were set up and police shot at, teargassed and also arrested some 14 residents. Many of the injured were women. (Greg Marinovich)

Schooling during Covid-19: It’s time to strip the curriculum

Weathering the coronavirus storm: Government must put the people first