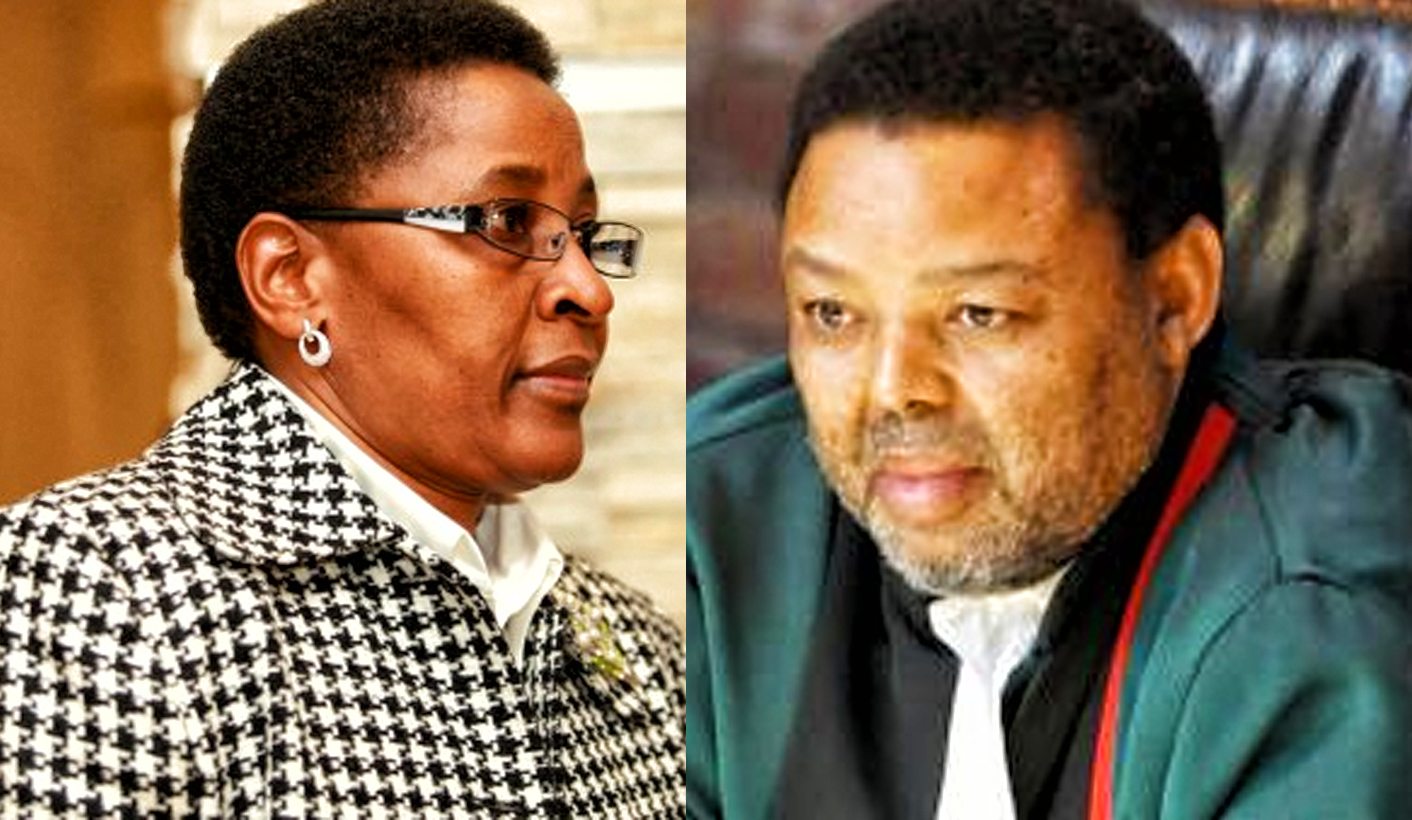 An application by two Constitutional Court Judges appealing a decision by their own court that a judicial conduct hearing into allegations of gross misconduct against controversial Western Cape Judge President John Hlophe should proceed has baffled and sent ripples through the legal community. Justices Bess Nkabinde and Chris Jafta’s unprecedented move on Tuesday has left some questioning the motive for their continued delay of a crucial mater affecting judicial accountability and integrity and that has already dragged on for eight years. By MARIANNE THAMM.

Has someone got to them? This is the question some in the legal fraternity say must be asked after Constitutional Court Judges Bess Nkabinde and Chris Jafta on Tuesday filed a legally baffling notice of motion in the Constitutional Court, seeking to have an order of their own court overturned. The court action is set to further delay the Judicial Conduct Tribunal into charges of gross misconduct against Western Cape Judge President, John Hlophe, as well as several other pending cases.

The matter pivots around the eight-year drawn-out and sensational saga involving allegations that Judge Hlophe had attempted in 2008 to influence the two Constitutional Court judges with regard to matters involving Jacob Zuma’s charges of corruption linked to the arms deal. Hlophe had allegedly told the two judges that he had “a mandate”, that he would be the next Chief Justice, and that they should rule in Zuma’s favour.

On 16 May 2016 the ConCourt dismissed an appeal by Judges Nkabinde and Jafta of a March Supreme Court of Appeal ruling that a Judicial Conduct Tribunal should continue its probe. Before this the judges had filed an application at the South Gauteng High Court which was also dismissed.

Judges Nkabinde and Jafta had argued that the SCA had treated their case unfairly and that the ConCourt, their own court, should hear the matter. But the ConCourt refused leave to appeal stating that the court did not have a quorum of at least eight judges as required by the Constitution as many of the 11 members were conflicted.

In their notice of motion on Tuesday, Judge Jafta, writing on behalf of both judges, requested that the 16 May decision by their own colleagues be “rescinded” and “set aside” on the grounds that it was granted erroneously.

Their argument now is that the ConCourt order that it was “incapacitated” from hearing the matter because of “conflicts disabling its members from sitting” did not set out the specific “grounds of the disablement” – meaning that it did not state which of the Judges who might form the quorum were conflicted and how they came to be so.

The judges are implying of course that while some of their ConCourt colleagues might have been part of the original group of 11 who complained collectively to the Judicial Services Commission in 2008, many are not.

However, the Concourt May order set out clearly the solid legal precedent for its decision, citing Hlophe vs the Premier of the Western Cape as well as Hlophe vs Freedom Under Law and Others.

According to one legal opinion, judges are unable to hear a case brought by colleagues and if a judge is involved as a litigant, a judge from another division must hear the case. In this light it is evident that the Constitutional Court cannot hear this matter.

In their affidavit to the ConCourt, Justices Nkabinde and Jafta said their appeal had been dismissed “without affording us an opportunity to be heard” and that this rendered the adjudication of their case “unfair”.

The decision by the judges to continue to challenge the legality of the “Hlophe matter” and in so doing delay further the proceedings is also curious as both have previously intimated that they have no objection to testifying at the tribunal.

The Hlophe matter has been a rumbling cloud that has hovered over the judiciary, sullying its integrity and that of Judge Hlophe himself for far too long. The fact that Jacob Zuma too features as a key figure in the entire saga only serves to fuel speculation as to the motives and intentions of those seeking to delay what should be an urgent matter of national importance. DM