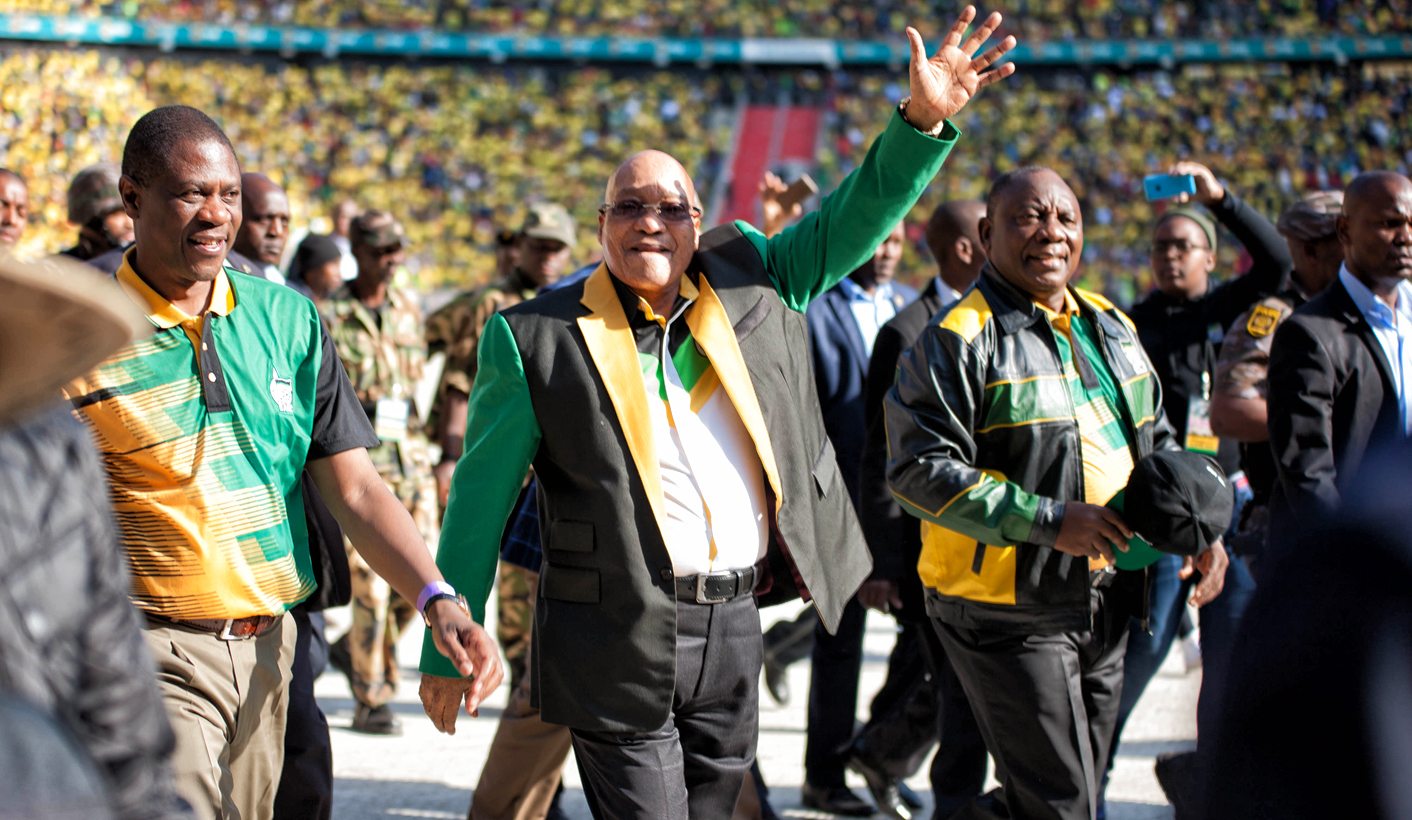 For no good reason, the Gauteng leadership promised to fill FNB Stadium to capacity in order to launch the provincial manifesto. It was an embarrassing, boring, grim afternoon in Soweto. And then, four hours late, the launch started. By RICHARD POPLAK.

The great, sclerotic, overlarge creaking machinery that is the African National Congress ground its way into Soweto on Saturday afternoon, thrashing everything in its way – including meaning. It’s a thing to behold, the ANC, as its legions make their way off buses into the country’s signature football stadium: for a moment in the shimmering sun the machinery appears to hold itself together, and then a glitch in the atmosphere occurs. It teeters, a monstrous Transformer on the verge of keeling over, about to crush hundreds of thousands beneath it into a gory mulch. Right on the point of toppling, it holds itself up.

And then it falls on its butt with a high-pitched cartoon jangle.

No one died on Saturday at FNB Stadium, although I’d wager that everyone present died a little inside. At 11:00 the Gauteng Province local election manifesto launch was supposed to kick off, but there was no one inside the stadium to kick it off in front of. It was, we were told, a bus thing: although FNB stadium has been around for six years, it is still mysteriously resistant to Google Maps. The ANC’s crowd delivery system is convoluted and complicated, and on this occasion the finer touches involved roping in a few hundred 13-year-olds from Johannesburg’s southern townships, assembling them together with their more experienced next of kin, and then somewhere on the outskirts of Lehae feeding them with exhausted beef burgers and draping them in T-shirts that read: “03 August 2016, vote ANC. Local Government is in your hands.”

After this, they were dropped of several miles from the stadium.

Gauteng Chairman Paul Mashatile had for some reason insisted on a grand ol’ party, promising God, other members of the National Executive Committee and the media that his structures would fill the 94,000-seat FNB facility. Why did he promise this? Perhaps hubris is instinctual at this point. But here it’s key to remember that I never promised 94,000 people, and nor to my knowledge did anyone else unaffiliated with the Gauteng leadership. Like Chekhov’s revolver, that number will return in the third act to fatally wound the pride and reputation of Mashatile and the rest of the Gauteng High Command.

One hundreds and four years of existence. And sometimes, it’s like they ain’t learnt much.

Anyway, the mood in the stadium was that of a funeral service commemorating the life of a lecherous, drunken uncle. The ANC Women’s League, the gals who have the back of party patriarchy accused of rape or other instances of sexual misconduct, were there early in their starched greens, organised and disciplined and ever so patient. Tshwane was represented, although they’d promised to stay away. Ungovernable Johannesburg was in the stands.

Would the event explode into a cascade of boos when the president finally arrived. Would the president finally arrive? Would the whole thing cave in on itself, sabotaged from within from the self-hating Gauteng leadership, who are on record as wanting JZ reprimanded for flouting the terms of the Constitution, among dozens of other unforgivable offences. This, after all, was the un-faction, the good guys, the nonPremier League. These were the cadres who were supposed to know what they’re doing.

And so we waited. And waited.

Where the opposition parties kicked off their launches on time and had us home in time for tea, it was clear that the ANC were intent on impressing Twitter by jamming the stadium with 48-billion people, a caper that was clearly not within their capabilities, despite the patience of their rent-a-crowd. Slowly – but slowly – humans in yellow T-shirts trickled in. Noon, then 1pm, then 2pm – afternoon started tugging at evening. The big motorcycles rode in convoy out of the tunnels, eliciting some cheers. Gauteng Premier David Makhura swore that 80,350 had “passed through the turnstiles” and were already in the stadium grounds.

And so we waited.

But what were we waiting for? This was ostensibly a Gauteng Manifesto Launch – signs around town insisted that “Paul Mashatile speaks!” – but with JZ and deputy president Cyril Ramaphosa having earlier in the week insinuated themselves into the programme, it seemed like a Grand Statement of Unity, a group hug. But in this Beckettian torpor, waiting for the leadership to exchange kisses for the SABC cameras felt like we were just waiting to wait.

Eventually, they did come. Onto the field walked President Jacob Zuma and his vast, ever-growing security detail. Two years ago, this contingent was half the size. Now, it’s a battalion. Zuma himself looked older than he did only weeks ago, desiccated, increasingly ashen – resemblance wise, it as if he’s trying to meet Beyond The Rubicon-era PW Botha somewhere in the middle. (Do wielders of absolute power start to resemble each other, like owners and their dogs? Does power have a single face, and are the powerful forced to share it?) His jowls were being tugged earthwards, his eyes drooped, he looked tired and bored and boring.

After the stroll around the stadium, the great and worthy took to the stage. Paul Mashatile sat sandwiched between the president and Ramaphosa like a junior mobster about to get whacked. It was super-awkward, especially when he had to lean over JZ to speak with David Makhura. The president stared unseeing into the luminous Johannesburg sky, thinking about… come to think of it, I don’t want to think about what Jacob Zuma was thinking about.

The shadows were long when Mashatile took to the stage in order to give a performance so wretched that it could barely be considered professional. What was he saying? As the sound degraded into fuzz in the upper stands, the fuzz bore its own coherence. The irony, of course, is that Gauteng is one of the country’s better-run provinces and that Johannesburg, a hellishly complicated city, has actually moved forward under Mayor Parks Tau. A decent manifesto that articulated real vision? That would’ve been welcome, and it would’ve made a case for voters uncomfortable with the advancing Democratic Alliance and the Economic Freedom Fighters.

But Mashatile said less than nothing. As he spoke, the rent-a-crowds started evaporating, and in minutes the upper stands were bare. If there were nearly 80,000 people in the audience when the leadership arrived (and I’m only quoting David Makhura), almost half had left before Zuma took to the lectern. And if Mashatile said nothing, Zuma multiplied that with a big fat zero.

What I’m saying to you is this: I had no idea why any of this was happening. Why not hire out a small hall to release the manifesto? Why not e-mail it out to the press? Why go to all this trouble and embarrassment to say absolutely fuck all?

On the Twitters, the ANC trolls raged against images of the never full stadium, as if iPhones were involved in the media conspiracy. Off went Chekhov’s revolver – 84,000 people there were not. And the faithful blamed “the media” for the inconsistency. What people seem to forget is how awesomely easy my job would be if the ANC led the country instead of bullshitting it into oblivion. It would be fantastic to walk into Luthuli House and fist bump Gwede Mantashe, while Jesse Duarte feeds me gentle non-stories as if I were the white, male Karima Brown. There’s nothing I want more than a functioning ANC – it would be brilliant to live and work in the African Denmark along 54-million generally content fellow citizens – but the truth is that these ANC people just don’t care.

No, FNB Stadium was not a poll. Yes, millions will vote for the ANC in Gauteng, largely because to many the alternatives remain unappealing. Yes, the outcome will be very, very close, and may very well tip in the ANCs favour. But this grim, meaningless event was so desultory, so depressing, so useless that it couldn’t but serve as a representation of the party that had organised it.

Eventually, we stopped waiting, and by the tens of thousands we walked into the gloaming while the President of the Republic’s voice echoed from the stadium. The great, rusty Transformer was firmly on its butt, thrashing its monster arms around uselessly. Yet there was no comedy to be derived from this fact.