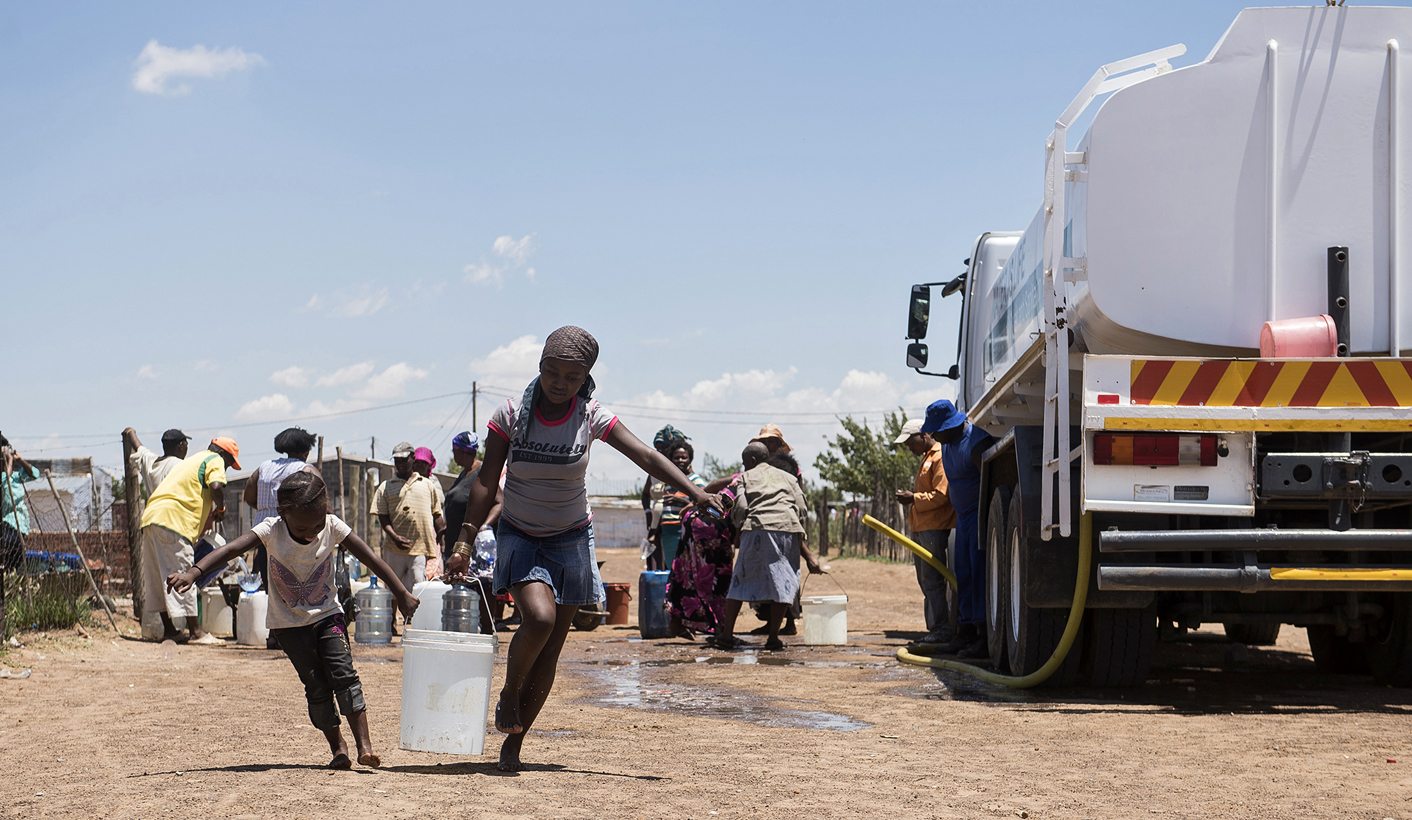 Ongoing water shortages and broken toilets are sparking protests in Limpopo and Mpumalanga in the run-up to the municipal elections. By Sandiso Mabusa, Cynthia Maseko, Ndivhuwo Mukwevho and Kerry Cullinan for HEALTH-E NEWS.

Mbombela residents recently blockaded a major road with burning tyres, branches and rocks to protest against the nomination of their councillor as the ANC’s ward candidate for the local government elections.

Residents claim that Eric Mutobvu, councillor for Ward 11 in Mpumalanga’s capital city, has “done nothing” for them, particularly to address water shortages. One protester said three weeks could go by without water in their taps, and only those who had money could afford to buy any.

For months, areas surrounding Mbombela and Ermelo have been without a steady supply of water, and residents report having to pay water truck owners R30 for 20 litres of water.

Beauty Nkosi, an Mbombela pensioner on chronic medication, said she struggled to adhere to treatment as a result of the water shortage because she needed water to cook her food and could not take medication on an empty stomach.

Periodic water shortages have not spared Themba Hospital in KaBokweni and patients report being turned away when there is no water.

The family of diabetic Thokozile Masinga, who developed complications, says she was given pain medication and turned away from the hospital during a water shortage.

Thulani Masango, a victim of a hit-and-run accident, says he was stitched up, given painkillers and discharged without being able to wash.

“When I asked to wash, I was told that there was no water,” he said.

Mbombela spokeswoman Sicelo Maseko said the municipality was aware of the water crisis, which was not only faced in the province but the whole country, and was doing its best to ensure communities received clean water.

However, one of the causes of water shortages is poor maintenance of water pipes, say residents.

Mpumalanga Department of Health Spokesman Dumisani Malamule denied that any patient was turned away from Themba Hospital because of water shortages.

“Naturally, if there is no water in the township the hospital is also affected,” said Malamule, who added that the department had supplied water tanks to the hospital and that water tankers were available in case of shortages.

As a long-term solution, government officials are investigating whether it is possible to drill boreholes on the hospital’s property.

In neighbouring Limpopo, the troubled Vhembe district has been battling with water shortages for months.

Vhembe, home to Vuwani, where 24 schools were destroyed recently, is reputedly one of the worst run municipalities in the country. Last week Auditor-General Kimi Makwetu reported that it had spent R77-million on consultants over the past five years, yet it had received a disclaimer for three consecutive years (2011-2014) and an adverse opinion in the 2014/15 financial year.

The consultants have not had an impact on water delivery either. Thohoyandou Unit E was without water for three months last year.

Last month, the Democratic Alliance wrote to the mayor of Vhembe district municipality, appealing to him to urgently fix the burst main waterpipes alongside the Muloloni River, which broke two months ago. Earlier in the year, the party reported the municipality to the SA Human Rights Commission for allegedly supplying communities with untreated water.

Siloam Hospital and Sibasa Clinic, as well as schools and homes in the Vhembe district, have been affected by water shortages recently.

Patients were unable to flush the toilets at the clinic for a couple of months. The clinic serves a number of villages including Makwarela, Miluwani, Sibasa, Tshivhulani and Dzingahe.

Even though the clinic is not far from the recently completed multimillion rand Nandoni Dam, the community still faces a shortage of water supply and many now depend on boreholes.

Meanwhile, two toilets are at the heart of a recent student boycott at Vhembe’s FET College. That’s because the Limpopo college only has two working toilets yet there are about 18,000 registered students.

“Just imagine how many we are and then imagine that we have to share the only two toilets that are working,” said Renkie Netshivhazwaulu, a second year student. “It is not only the hygiene aspect that is worrying but the fact that we have to stand in a queue for hours to get our turn to use the toilet. We have been complaining for over a year now.”

The students have returned to class for mid-term exams but management has not done more than promise to fix the toilets. In addition, the college is so short of desks and chairs that some students stand in class – even during exams.

“We have been trying for a very long time to raise all these issues. We are back, but still there are only two toilets on campus that are usable. We wait to see,” said Masala Muvhulawa, president of the students representative council.

Students at Rivoni School for the Blind in Elim have also returned to their desks after weeks of protests over broken toilets. At least in their case the provincial education department has delivered mobile toilets to the school and promised to find the school alternative premises.

Unlike national politicians, local government candidates are unable to dodge their communities’ service delivery issues and there are likely to be more protests in the run-up to the August 3 municipal election as long-term municipal failures to address water and sanitation problems come to a head. DM

Photo: Residents push a wheelbarrow with water containers leaving a water distribution point in the rural farming town of Senekal, South Africa, 10 February 2016. The water is trucked to the town by local government sources. EPA/SHIRAAZ MOHAMED