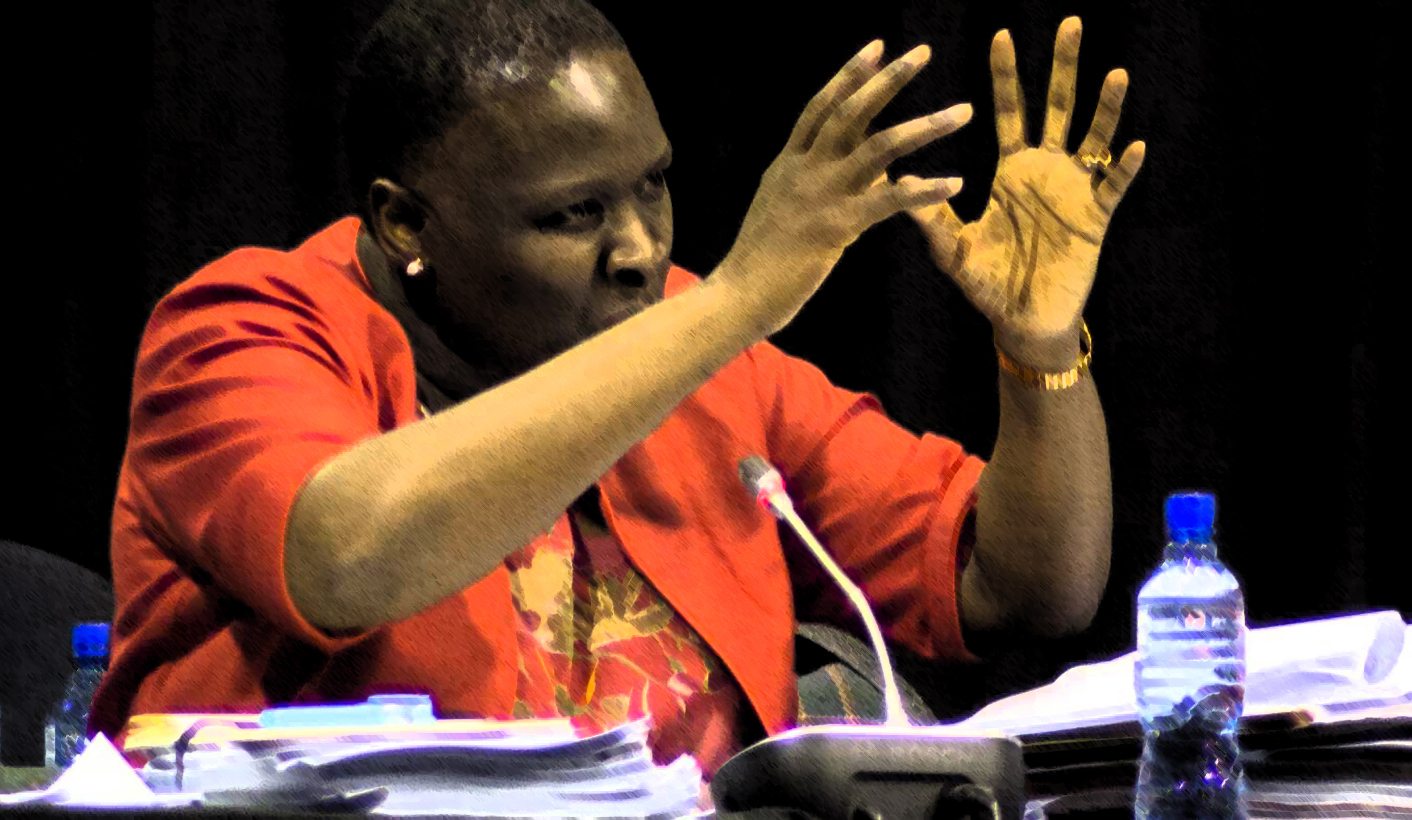 Suspended national police commissioner Riah Phiyega came under heavy criticism during the second day of closing arguments at the Claassen Inquiry on Thursday with multiple calls for her removal from office. Phiyega’s team will continue its defence on Friday, but it doesn’t look good for the commissioner, who hasn’t testified in her own defence. By GREG NICOLSON.

Evidence leader Advocate Ismail Jamie was scathing in his description of Phiyega’s conduct regarding the Marikana police operation and the subsequent Marikana Commission of Inquiry as he laid out arguments for each point in the Claassen Inquiry’s terms of reference as to why she is unfit for office.

The inquiry is coming to an end as parties submit their closing arguments regarding Phiyega’s role at Marikana, where 44 people were killed in one week in 2012, police killing 34 striking mineworkers in a single day.

President Jacob Zuma asked the commission to inquire whether Phiyega misled the Marikana Commission on when the decision was taken to “go tactical”; whether in choosing that plan the deaths should have been foreseen; whether her remarks to police afterwards were appropriate; whether a media statement following the massacre attempted to mislead the public, and whether her testimony to the Marikana Commission was befitting of her office.

Jamie said the evidence showed Phiyega breached the Constitution, law, and police code of conduct, is unfit for office and is unable to carry out her duties in accordance with the law. He asked Judge Neels Claassen, who chairs the commission, to recommend she is removed from office.

The evidence leaders said anyone with a slight understanding of the situation in Marikana should have known the risks in implementing the tactical “disperse and disarm” plan. Phiyega was in Marikana on the Monday when two police officers and three strikers were killed, was present at the SAPS national management forum (NMF) meeting on the Wednesday when it was decided to implement the plan, and was told on the Thursday the plan would go ahead in the afternoon. It was designed for the morning, before thousands of mineworkers would come to the koppie.

“Now what would a prudent, reasonable responsible national commissioner of police do? We submit the answer is obvious. She should have said, “What are we talking about? Why are you going to do this this afternoon? You’ve got thousands of people there, you can’t do this safely.” Or she should asked questions. She should have said, “What steps have been taken to make sure people don’t get killed or injured? She did not do that,” said Jamie.

She was either unaware of the details of the plan or ignored them, he added, showing incompetence or gross negligence. If she foresaw the likelihood of fatalities and allowed the plan to proceed, she could be guilty of murder or culpable homicide, Jamie added.

Phiyega must take responsibility for the decision of the NMF, he said, as the ranking officer at the meeting. Given the importance of the operation she should have taken control under her constitutional powers and that she believes she didn’t have that power shows she’s unfit for office, Jamie added.

“This is not the evidence of a truthful witness,” Jamie said on Phiyega’s claim that it was simply oversight that she along with other SAPS officials failed to disclose when the decision was taken to implement the tactical plan that left 34 people dead.

Jamie said Phiyega’s statement to officers after the massacre that Marikana “represents the best possible policing” was “breathtakingly inaccurate”. Such operations are measured by cost, damage to property, injury to people and loss of life. “We say by this standard the operation was a total disaster. How could it ever represent the best of possible policing? It was a disaster for which the captain of the ship must take responsibility,” Jamie told the commission.

Phiyega was hammered for the altered media statements after the killings where descriptions of the two killing scenes were morphed into one, obscuring what really happened. There were deliberate insertions and deletions, said Jamie, who could think of no other explanation except that the police commissioner was deliberately trying to mislead the public.

The evidence leader repeatedly criticised Phiyega for choosing not to testify during this inquiry. In February, she claimed there was a “witch hunt” trying to distract her from efforts to set the record straight. She rued allegations being made without her having her say. On Phiyega’s decision not to testify when given the chance, Jamie said, “This was a specific inquiry focusing on the conduct of the national commissioner, precisely to get to the bottom this sort of thing… and she chose not to testify. And we say that says it all.”

Representing the families of the killed mineworkers, Advocate Dumisa Ntsebeza agreed Phiyega was not fit for office. While also arguing her failings, Ntsebeza said the Marikana Commission left the families unsatisfied and without closure. Ntsebeza said, “When she gets recalled, this is the point we want to make, she has an opportunity to extend the hand to these families, who have been there for…”

“Unconditional apology. Because now she knows that on a factual basis concurred on by two or more pathologists, one of whom had been engaged by her own department, that some of this can never be explained on any other basis, that these people were shot while they were fleeing.”

Advocate Dali Mpofu, representing the injured and arrested mineworkers, continued a line he often took at the Marikana Commission and argued the Claassen Inquiry has a duty to decide whether political influence motivated Phiyega’s actions. In a back-and-forth with Claassen, who said Zuma could have asked the inquiry to look at political pressure but had not, Mpofu noted various aspects of the Marikana Commission’s report suggesting political pressure could have played a role in either the police operation or Phiyega’s later testimony.

The commission must ask why she acted as she did, Mpofu urged. “In our respectful submission, she succumbed to political pressure. Something is wrong and we need as a country to know if we bury our heads in the sand say, ‘No, the president would have written ‘political’ if he wanted to find [it],’ then we are shirking from our responsibility,” he said.

Defending the suspended commissioner, Phiyega’s lawyers addressed Claassen in the afternoon. Advocate Mahlape Sello said that according to the SA Police Service Act, a national commissioner cannot interfere with operations of provincial commissioners unless authorised by the president. In this case, Phiyega was not authorised to act on Marikana, she said. Phiyega could assist if requested, Sello said, but not take over. “What the law doesn’t require of her, is to take over the functions of the provincial commissioner unless she is so directed by the president.”

Sello urged the commission to reject the claim to look at political influences that could have motivated Phiyega, saying the inquiry is bound by its terms of reference. Phiyega’s lawyers will continue to deliver their closing arguments on Friday. DM