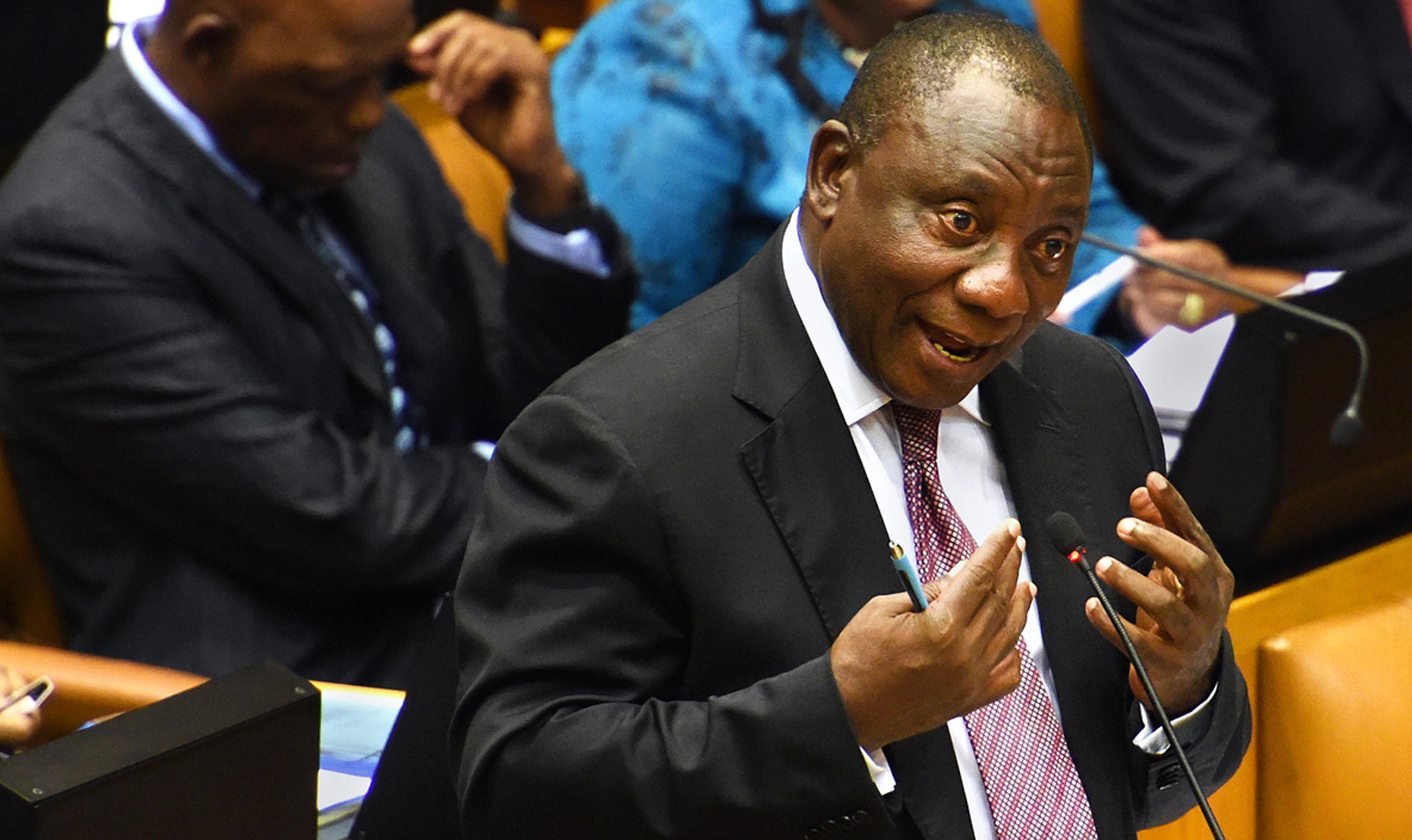 Deputy President Cyril Ramaphosa on Wednesday said Parliament was “the most important guarantor of our democracy” and the executive was “committed to play its part in ensuring that Parliament is a forum for all national debates”. His statement has come six days after the Cabinet discussed its concern about disruptions in the House in the wake of two bruising evictions of Economic Freedom Fighters MPs at the May presidential Q&A slot and the presidential budget debate. But Ramaphosa’s statement was limp, calling for dialogue and collaboration to resolve differences while reiterating the ANC narrative of blaming disruptions squarely on “a small minority of MPs”. By MARIANNE MERTEN.

Why Minister in the Presidency Jeff Radebe at last week’s post-Cabinet media briefing said Cyril Ramaphosa would make a “major statement” boggles the mind. But Radebe declined to answer questions on the discussions on Parliament due to this statement by the deputy president as leader of government business, or the traditional liaison between the executive and national legislature.

At 06:29 on Wednesday Ramaphosa’s statement finally dropped. By then parliamentarians had decamped for an 11-week “constituency period” ahead of the 3 August local government elections.

Most of the 629-word statement is dedicated to outlining how much the executive does to account to Parliament.

“Ministers have responded well to a substantial increase in the numbers of questions for written reply. In 2009, over 2,000 written questions were put to ministers, while by the end of 2015, the total number exceeded 4,000,” Ramaphosa said. “Even with this significant increase, the proportion of questions answered each year has exceeded 95%.”

But the DA, EFF, IFP, United Democratic Movement (UDM) and Cope have long complained, some more vocally than others, that the written replies are of varying quality.

“The executive continues to take seriously its responsibility to account to Parliament. Ministers and officials regularly engage with parliamentary committees and participate actively in plenary debates. Ministers appear in the National Assembly and National Council of Provinces to answer questions,” said Ramaphosa.

Indeed, and Ramaphosa has not missed a question slot in the House. But the DA has long complained about the absence of, among others, Trade and Industry Minister Rob Davies. When Labour Minister Mildred Oliphant after her budget debate was asked why she has not appeared before the parliamentary labour committee, her response was that she had not been invited.

And the quality of ministerial oral replies leave the opposition fuming in the wake of what has now become the presiding officer’s standard retort: You may not like the answer, but an answer has been given – moving on.

“Parliament’s committees, in both the National Assembly and the National Council of Provinces, have been effective in exercising oversight, promoting public participation and undertaking the detailed work of processing legislation,” said Ramaphosa.

MPs, and not only those from the opposition benches, privately express concern that their oversight visits are orchestrated tours to showcase achievements, even when just down the road a different reality exists. Committee oversight reports usually linger for weeks, if not months, below the line, parliamentary jargon for items that may be discussed at some undetermined stage.

It’s now norm for departments and state entities to submit their presentations days before a committee briefing, and then to present their submissions to MPs before question time. Still, engagements frequently are robust, such as a recent finance committee discussion with both the National Treasury and South African Revenue Service (SARS) that highlighted potential jurisdictional pitfalls with the proposed border management agency.

Driven by Home Affairs, in its current contemplated form the agency would not only regulate immigration, but also take over the customs and excise functions, which presently enable SARS to collect significant revenue for the national coffers. Needless to say, SARS is not happy and the National Treasury is not quite pleased either. The finance committee called on both to approach their government colleague to iron this out. Whether anyone pays attention to the parliamentarians will emerge only when the draft legislation to establish the border management agency reaches Parliament – some time after the municipal poll.

Then Ramaphosa gets to the heart of it – the disruptions. “Of particular concern is the violent nature of some of these disruptions. Refusal to adhere to the rules of the Assembly undermines the integrity of the institution and demonstrates disdain for the will of the people. The efforts of a small minority of MPs to impose, through force and intimidation, their will on Parliament reflects a contempt for the principles of democracy,” said Ramaphosa.

This echoes the ANC parliamentary caucus’s well-ventilated line: The right of ANC MP to speak is impaired when the EFF launches volleys of points of order.

These points of order are the first step of the routine that now unfolds every time President Jacob Zuma, not anyone else, is in the House. The EFF maintains Zuma was an “illegitimate president”, particularly since the Constitutional Court Nkandla judgment ruled that Zuma had failed to uphold the oath of office and acted inconsistently with the Constitution.

Speaker Baleka Mbete, who is also the ANC national chairwoman and who presides when the president is in the House, eventually disallows points of order. They continue, and Mbete activates the rules process to call in the parliamentary protection services. Dubbed the “bouncers”, now strengthened with former ordinary and riot police officers, they move in – and the EFF is forcibly evicted from the House in varyingly ugly scenes.

“Cabinet welcomes the determination of the majority of MPs to respect the rules, uphold the dignity and advance the transformative work of Parliament,” said Ramaphosa.

It’s a clever play as opposition parties are divided over the EFF tactics. The IFP most certainly believes in decorum above all, and the Freedom Front Plus sharply speaks about the EFF, while the DA is somewhat more conflicted. Cope has decided to boycott sittings.

“Cabinet calls on all parties to work together to ensure that the rules and procedures are applied consistently, fairly, and without fear, favour or prejudice. As the executive, we reject in the strongest terms any attempt, in whatever form, to suppress debate or silence dissent,” said Ramaphosa.

The irony is that opposition parties across the board consistently and for a long time have complained about bias from presiding officers, who implement the rules consistently. A recent ruling by Deputy Speaker Lechesa Tsenoli on the unacceptability of quoting for judgments, for example, is set to be taken to the courts by the DA as limiting freedom of speech in the House. The list of unparliamentary language is ever increasing and while, for example, voertsek is on that list, when it comes from the ANC benches presiding officers on many occasions say they have not heard.

Politically the governing ANC, which holds 249 of the 400 National Assembly seats, is under no compulsion to accommodate anyone else. And that sentiment is expressed quite bluntly: if opposition parties want to change anything, they must first win a majority of votes, as ANC MP Nyami Booi put it in one of last week’s debates.

“Cabinet will continue to work with Parliament to improve people’s lives… Members of the executive will remain open to constructive criticism, robust debate and strong oversight,” said Ramaphosa. “We will continue to seek to resolve differences and problems through dialogue and collaboration, in the spirit of our Constitution and in keeping with our democratic traditions.”

Two weeks ago the ANC parliamentary caucus said it supported greater security in Parliament. “We need to enhance the safeguards in Parliament. As to what that means, because we don’t have security expertise, we can’t go into the details,” said ANC Chief Whip Jackson Mthembu at that media briefing. His deputy Doris Dlakude added: “If it means in the chamber, after doing a security assessment, there’s a need people are subjected to body searches – so be it”.

On Monday EFF leader Julius Malema told Daily Maverick that Ramaphosa’s statement was an attempt at “trying to do a clean-up for his boss”, but it could not be business as usual as Zuma was “an illegitimate president, found on the wrong side of the law”. When Zuma was not present, he added, “Parliament is performing very well. The executive accounts although they don’t answer questions – half the time they waffle – and are protected by the presiding officers”.

DA Chief Whip John Steenhuisen described Ramaphosa’s statement as “an attempt to brush this mess under the carpet”. It failed to outline “actual political engagement with other parties in Parliament on institutional reform” to ensure the national legislature met its constitutional oversight and legislative obligations.

In November 2014, Ramaphosa as leader of government business met political party leaders after the first EFF “Pay back the money” protest had scuppered a presidential question session two months earlier. It was agreed, among others, to establish a multiparty committee to find a political solution for the parliamentary troubles. The DA’s insistence on bringing a motion of censure against Zuma didn’t help, but ultimately Ramaphosa was sharply criticised for the initiative by the parliamentary ANC caucus, including his Cabinet colleagues, and the brokered truce collapsed.

Perhaps for this reason, Wednesday’s statement provided little but blanket vagueness and political digs at the (unnamed) EFF. But more is needed to resolve Parliament’s troubles so these do not continue when MPs return from electioneering in mid-August 2015. DM