Eddie Keizan: The Tale of a Motorsport Tiger 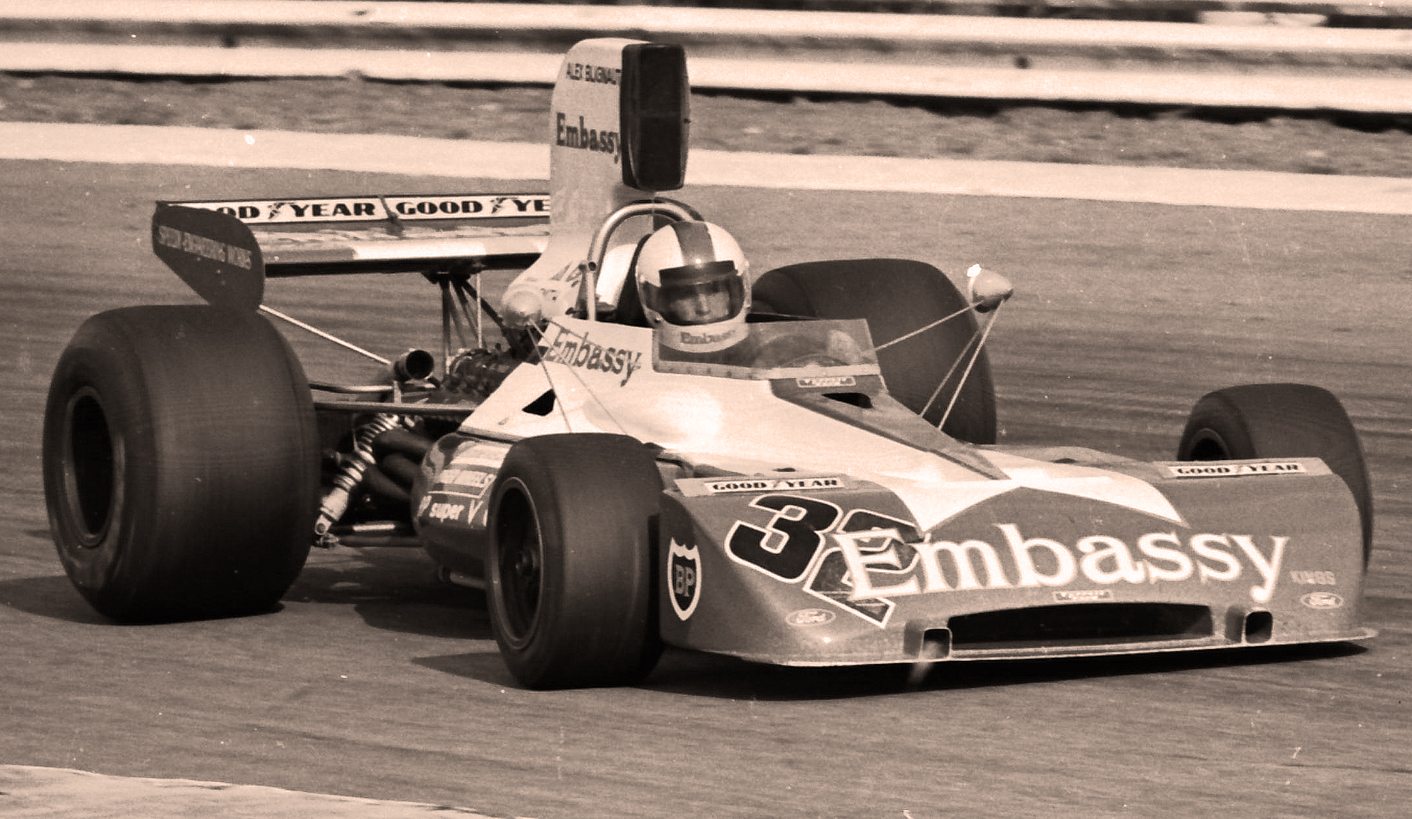 There are two ways to remember someone and determine the mark they have made and left.

The first way is through figures – what academics might describe as “quantitative aspects”: principally, the honours and awards you accumulate, and the wealth and possessions you acquire.

Eddie did (more than) well in terms of this measurement.

Educated at King Edward School, after leaving university, he followed his passion into motorsport, participating full-time for 14 years, in the process winning four Production Car Championships, and competing in three World Championship Formula 1 rounds in South Africa between 1973 and 1975.

This was an analogue age, when drivers counted much more than gizmos, when the imbalance between grip and power placed a premium on skills in cars that were shockingly dangerous, when everything was apparently in black and white from politics to cinema newsreels, and the drivers were less prima donnas than simply manne.

Emerson Fittipaldi became World Champion driving the same Lotus that Eddie later inherited as the Team Gunston ride in the 1975 South African Grand Prix. Emerson writes, “The Lotus 72 was the Stradivarius of the Formula One field, a delicate thoroughbred, which had to be carefully tended for, stroked and caressed to get the best out of it. Those that drove it at the highest levels in Grands Prix were blessed, but had to be at the top of their game.”He adds: “Eddie was lucky to enjoy the beautiful pleasure of driving the 72, one of the great Colin Chapman creations, one that was also my World Championship car.”

Ed also rallied successfully, twice winning Lesotho’s super-tough Roof of Africa. He retired from professional motorsport after winning the Wynns 1,000kms at Kyalami in 1979, though he continued racing competitively into the 21st century.

Along the way, he used his R3,000 of winnings from the 1972 Formula 5000 championship in Alex Blignaut’s car to purchase a share in Tiger Wheels, then a small semi-defunct wheel manufacturing company employing just 14 people. Having bought a 74% stake in ATS in 1998, at its peak in 2004 Tiger ranked among the top 10 alloy wheel manufacturers world-wide, an original equipment supplier to Volkswagen, Audi, Mercedes, Jaguar and Volvo, with factories in South Africa, Poland, America, and Germany, turning over R3.5-billion and employing 3,500 people. In so doing, Ed disproved, for once, the old adage: “The best way to make a small fortune from motorsport is from a large one.”

Brian Redman, considered the best all-rounder driver of his generation, says of Eddie that he “was of those very rare people who were able to combine successful careers both as a race driver and as a titan of industry. In 1969 the Porsche team comprised 10 drivers. In 1971, my great co-driver Jo Siffert died in an F1 race at Brands Hatch. After his funeral, Rico Steinemann, our team manager, said ‘the only driver amongst you lot who had any business sense was Jo’. Such a man,” says Brian, “too was Eddie. He will be sadly missed.”

Still, it was in that other way I referred to of measuring a life’s work that Eddie excelled. This metric has less to do with figures and fortunes, but rather how you conduct yourself and the balance that you strike in the process, about qualities of integrity and modesty, and about how you worked and treated others. This is how people ultimately remember you.

Eddie was a man who achieved and gained so much, but is better known still for what he gave than what he had. Part of this excellence, I suspect, is because he never forgot about his origins. He possessed an abiding humility for all his fame and fortune.

In an era when we are used to dads pushing their kids out onto the track at six, and spending obscene amounts to help them ascend the motor-racing ladder, there was no silver motorsport spoon in Ed’s case. This came through his job as the night manager at Dunk-a-Donut in Hillbrow, where he befriended some of the characters behind Ecurie Aquila who met there late for blotting paper and coffee after their Thursday evening excesses at the nearby Skyline Hotel.

First there were Minis, de rigueur in that era, then the Ford 20M, “built under a tree on Alex’s property”, he told me once. The 20M, one of the more unlikely racing cars, was the reason I first met him, as a wide-eyed six-year-old in the foyer of what is now the Trans-Karoo Lodge in Britstown, where he had stopped en route to race in Cape Town, the Ford on the trailer outside. Despite a childhood hanging around race tracks and pits, I remembered it well because a motor-racing giant, especially from my then vertical vantage, had taken the trouble to stop to chat.

That tells its own story. Indeed, the measure of Eddie’s wider qualities is evident in the memories of those with whom he intersected.

Of course, I should add, that this was the 1970s. David Hobbs, who was a superstar at Le Mans and on the Indy ovals, raced with Eddie in the 1978 Wynns 1,000kms, finishing fifth in the BMW 535. “I still remember him as that vibrant young man with lots of hair,” recalls David.

In fact, trawling through lots of old photos, the one thing that sticks in the mind about Eddie from that era, is that hair, less Austin Cooper S than Austin Powers.

Still, it was an era when, in spite of, and probably because of the lack of materialism and money, friendships were at the centre of everything.

Gauteng’s Rory Byrne, officially the Formula One world’s second most successful designer, is one of those friends, and writes: ‘The results of [Ed’s] talents, both as a racing driver and an astute businessman, speak for themselves. Having first met Eddie while I was working part-time for Progress Performance in the 1960s, it is with great fondness that I recall his visit to Maranello and the time we spent together while I was showing him around the Ferrari facility.”

Ken Howes, who too was part of that gang in the early days, recalls: “Looking back to our first meeting way back when Ed drove the Mini for John Cooper through Formula Ford, his time with Alex Blignaut, and a period as a teammate at Team Gunston and later with the big BMWs, it seems that I have known Eddie forever. I have fond memories of the early days at Tiger Wheels and Speed Den in Fordsburg gossiping and reliving the previous weekend’s races with Ed, Dennis and the boys, times that were, in a word, priceless. I feel honoured to have known Eddie and have often taken the liberty of describing him as a friend. Hopefully he would not be offended,” says Ken, who has enjoyed a stellar motorsport career, both with another of Eddie’s great friends, Ian Scheckter, and Sarel van der Merwe, and subsequently with Hendrick Motorsport’s all-conquering Nascar operation in the US.

Fast-forward a little over 30 years from that chance meeting in Britstown, and my own life intersected once more with Eddie’s, not initially through motorsport, but through our mutual involvement in a range of social causes. Then it was on to the various motorsport book projects with which I somehow became ensnared, where he always went out of his way to assist in capturing our rich history.

Johann Rupert, who set up the Franschhoek Motor Museum, and whose family business has been so intimately involved with South African motor-racing among many other successes, reflects: “We South Africans habitually undersell ourselves. We shouldn’t do so. Take motorsport. Not only did we run our own Formula One series, but it’s testament to our qualities of innovation and resourcefulness that we were the first to embark on the new era of commercial branding in Team Gunston. ?The drivers, managers, promoters and engineers that blessed that team, and others, were class acts, men such as Eddie Keizan.”

Ed and I also found time to collaborate to write up the story of the demise of the manufacturing side of Tiger, since, typical Eddie, he wanted to ensure that others learnt the right business lessons. I have to add that we did just one motor race together, a particularly memorable one for me and Eddie’s last victory, the 2012 Border 100, making it a joint 100% winning record. He retained a particular affection for the Roof, the two of us flying to Lesotho one winter’s morning to meet the King to talk about ways of reinvigorating that event.

In these, and other adventures, he was always side-by-side with Hilary, his partner of more than 40 years.

It is a measure, too, of Eddie that he never, at least to me, proffered an opinion on anything unless directly asked. But he had some sage advice when I did so: from assessing my sanity in driving a Formula 5000 in the GP curtain-raiser in Australia five years ago which he said required “a distinct lack of imagination and sense of self-preservation” after he had tested the device. I evoked a similar response in riding my bicycle without lights from Bellagio in Italy through the tunnels to meet him and his children Gary and Natasha for lunch in Switzerland.

I have to, however, leave (almost) the final word to someone who has, love him or hate him, immeasurably and indelibly shaped contemporary global motorsport. He writes: “I was very sorry to hear of Eddie’s illness. In these cases we can look back on all of the good things he has done, not only for himself, but for others. In the early days he had ambitions and he succeeded in most of them except being a Formula One World Champion.” Instead, he writes, Eddie “got the tiger by the tail”.

It is signed “Bernie”.

The story of Eddie Keizan is indeed the tale of a tiger. His was a remarkable life, well and honourably led, and with which it was a privilege to have intersected. DM