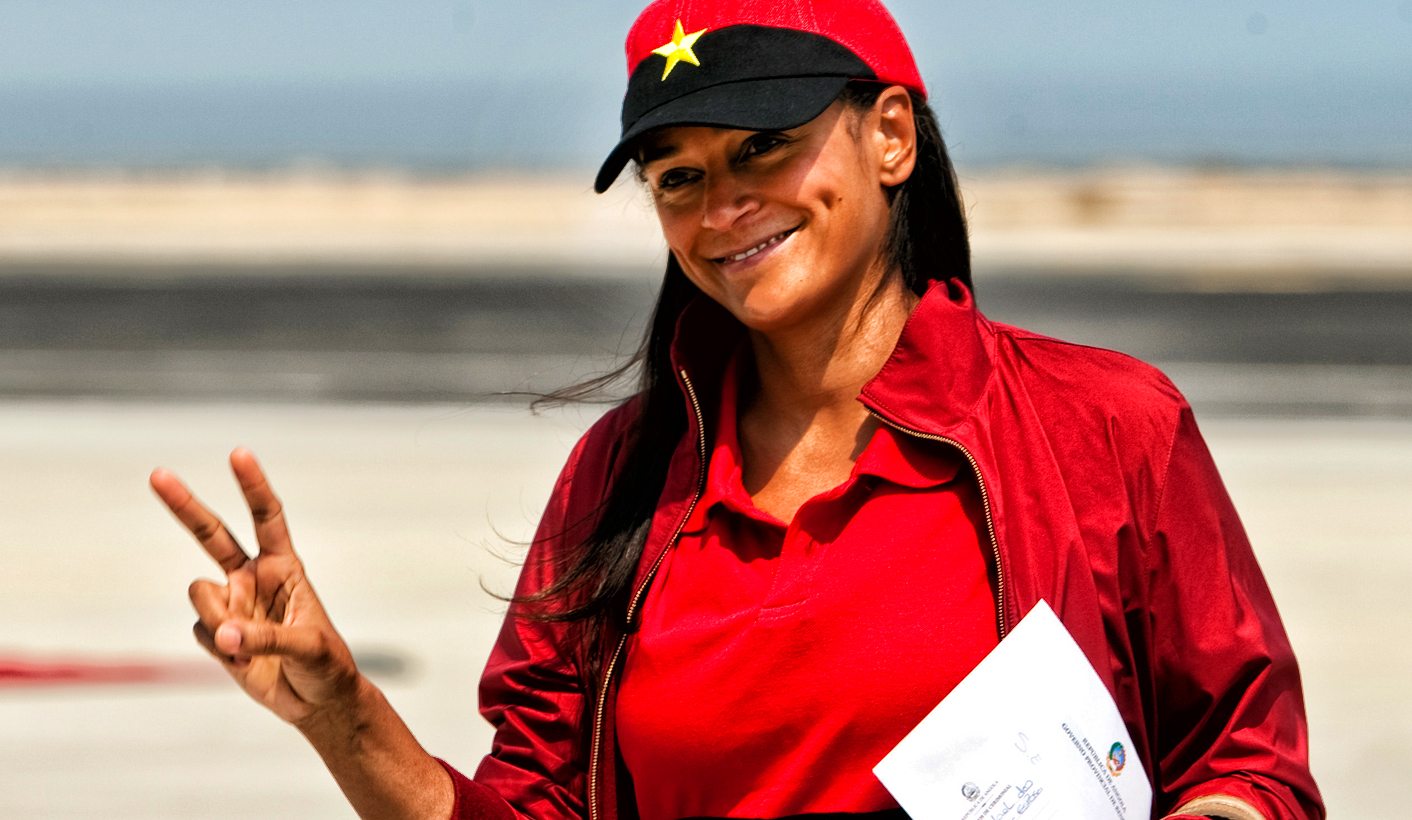 Isabel dos Santos, reputed to be Africa’s richest women, is worth $3.3-billion. But does all that money rightfully belong to her? By RAFAEL MARQUES DE MORAIS.

When Isabel dos Santos sits down to count her billions, as Africa’s richest woman, much of that fortune is in stocks and shares which she counts as her own. Forbes estimates her wealth at $3.3-billion. The reality, however, is that a large proportion of it, estimated at €1.6-billion ($1.8-billion) according to the Diário Economico’s calculations, corresponds to stocks in the Portuguese oil and gas company, Galp Energia, which should legally belong to the Angolan National Oil Company, Sonangol.

President José Eduardo dos Santos’s daughter told the Wall Street Journal last February: “I’m not financed by any state money or any public funds.” She insisted, “I don’t do that.” Ever since the announcement that she had become a billionaire, Isabel has done her utmost to justify her fortune as “clean”, the result of entrepreneurial expertise which began with her selling eggs at the tender age of six.

Photo: President of Angola, Jose Eduardo dos Santos, and his daughter Isabel dos Santos (R) during the inauguration of the new Marginal of the Luanda Bay in Luanda, Angola, 28 August 2012. EPA/PAULO NOVAIS

Galp Energia is Portugal’s largest company in the oil and gas sector with share capital worth €9.5-billion. Maka Angola has conducted an investigation which unmasks Isabel dos Santos and proves that – contrary to her assertions – her Galp shares were obtained via Sonangol in a business deal paid for by state money and public funds.

Isabel’s Galp interests are held indirectly, through the offshore Esperaza Holding BV which owns 45% of Amorim Energia, the largest shareholder in Galp with 38.4% of its stock. Amorim Energia’s majority owner (with 55%) is Portugal’s richest man, Américo Amorim, who was Isabel’s partner in creating the BIC bank in 2005. The two are also partners in the company Nova Cimangola, acquired from Cimpor by the Angolan State for $75-million.

It is through Esperaza Holding that Sonangol’s funds were channelled to Isabel dos Santos. In 2005, when Esperaza Holding bought into Galp, it was registered by the Dutch Chamber of Commerce (Handelsregisterhistorie) as being a company wholly-owned by Sonangol and this was again the case the following year.

However, documents obtained by Maka Angola show that on January 25, 2006, Sonangol signed a contract with an offshore company named Exem Africa Limited, registered in the British Virgin Islands, to create Esperaza Holding as a vehicle for investment. The contract – in English – specifies that Sonangol is the sole source of funds that will be invested in Galp in the name of both parties.

This is the “smoking gun – an undeniable paper trail that shows Angolan public money was put into Esperaza and in turn into its holding in Galp. With the formalities for the creation of Exem Africa Limited complete, Sonangol transferred 40% of its stake in Galp to Exem.

According to a document obtained by Maka Angola, Isabel dos Santos formally reported in 2013 to the Portuguese Competition Authority (Autoridade da Concorrência) that she is the beneficial owner of the Exem’s shares in Esperaza. In short, Angola’s state oil giant was using a front company in which Isabel dos Santos is the ultimate beneficial owner to channel public money into overseas investments. Without Exem having to put up a single cent, by a stroke of the pen the company found itself the owner of 40% of Sonangol’s investment in Galp.

Information in the public domain was that Esperaza Holding (the vehicle for controlling Galp shares) was 45% owned by the president’s daughter and 55% owned by Sonangol. However, the formal agreement shows that she received 40% of the stakes, and not 45% as she misleads the public to believe. The deal was signed by Manuel Vicente, then Chairman of the Board and CEO of Sonangol (now Angola’s Vice-President) and on Isabel’s behalf by her legal counsel, Fidel Kiluanje Assis Araújo.

The memorandum of understanding between the two parties divided Sonangol’s Galp share acquisition in two phases: in Phase One, Exem would pay Sonangol €11.2-million ($12.5-million), equivalent to 15% of the value set at the time for the execution of the transfer of the shares. In Phase Two, Exem would pay Sonangol a further €63.8-million ($71.5-million) to cover the remaining 85% of the cost of their 40% split of the parcel of Galp shares.

It was a sweet deal because Isabel didn’t have to pluck a single penny out of her own purse. The money would come out of the Galp dividends paid to Esperaza Holding along with nonconvertible units at the Euribor three-month interest rate. That same year, 2006, Isabel dos Santos’s husband Sindika Dokolo became a director on the Galp Board on behalf of Esperaza Holding. Isabel dos Santos formally admitted to the Portuguese Competition Authority that she is the minority shareholder in Esperaza Holding through Exem Africa.

This is how the scheme worked. Sonangol paid for 45% of the shares in Amorim Energia which in turn held 38.4% of the shares in Galp. Sonangol then “donated” a proportion of that to front companies that lead to Isabel dos Santos, requiring her only to pay up once she had pocketed sufficient dividends from the investment.

So far as Maka Angola has been able to establish, there is no evidence whatsoever that Isabel (or her front companies) ever paid Sonangol the agreed sums. No official record seems to exist to show even that first payment (€11.2-million) changing hands. In fact, even if she were to pay up in full, the total bill for the share transfer (€75-million to obtain 40% of Esperaza) was actually less than the true cost of Sonangol’s investment. How else then can this transaction be described except as an illicit transfer of State assets to the president’s daughter?

Isabel dos Santos didn’t have to spend a single penny of her own money on this fine piece of business. All the money owed to Sonangol for the share split would come from the profits: Galp pays dividends to Esperaza and Esperaza is then supposed to divide it up and remit to Sonangol its share (60%). But Sonangol’s balance sheets and accounts show no payments from Isabel dos Santos’s holdings towards these debts.

To date, all that has happened is that Sonangol made the purchase and Isabel received the pay-out. And yet she portrays herself “in ringing declarations” as “tremendously independent”.

“I always had this wish to stand alone and not be in my parents’ shadow,” she told the Wall Street Journal earlier this year. In truth, thanks to her father’s 37-year presidency, Isabel has used Angola’s state oil company as her private investment banker doling out an ‘inheritance’ worth hundreds of millions of US dollars to propel her into billionaire status, at the expense of the long-suffering and impoverished Angolan people who should be the true beneficiaries of Angola’s oil wealth.

So it should come as no surprise to anyone that the person entrusted by the president with the restructuring of Sonangol (through her position as chair of the Commission for the Reorganisation of the Oil Sector) is none other than Isabel dos Santos. This brainchild – the creation of the Boston Consulting Group and the Portuguese firm of lawyers Vieira de Almeira e Associados – is nothing more than the latest scheme by which the president’s family milks Sonangol for its own ends.

An estimated two-thirds of Isabel’s fortune is based on her Galp shareholding, which, with no evidence to show that she has ever repaid Sonangol for its initial investment, should properly belong to the Angolan state oil company. Maka Angola’s legal analyst, Rui Verde, says this:

“Isabel dos Santos’s shares in Galp should have an ownership reserve clause or a lien on these assets in favour of Sonangol until such time as the money owed is paid up in full. Even then it is not a legal act for a state firm to function as a private investment bank for the presidential family.”

Verde continues: “From a strictly legal point of view, the handover of shares to front companies acting for Isabel, should be ruled null and void with the shares immediately reverting to Sonangol ownership.” In this lawyer’s professional opinion, there is a strong case for a criminal investigation by both Portugal and Angola into this matter, because of the “indications of corruption, embezzlement, evasion and money-laundering”.

“Evidence that the shareholding obtained by Isabel dos Santos came about through the unsanctioned use of state funds by underhand means is sufficient grounds to suggest a contravention of the international laws against money-laundering, and that is a public crime requiring obligatory investigation by the Office of the Attorney General,” said Verde. DM

Photo: A file photo dated 27 August 2012 shows Isabel dos Santos posing and making the V sign in Lobito, Angola, 29 January 2013. Isabel dos Santos, the oldest daughter of the Angolian President, is a business woman and investor, and, according to Forbes Magazine’s recent calculations, she is Africa’s first female billionaire. On top of her interests in oil and diamonds, she has significant shares in telecommunications, media, retail, finance and the energy industry.