Parliamentary Diary: Cabinet keeps its concerns to itself 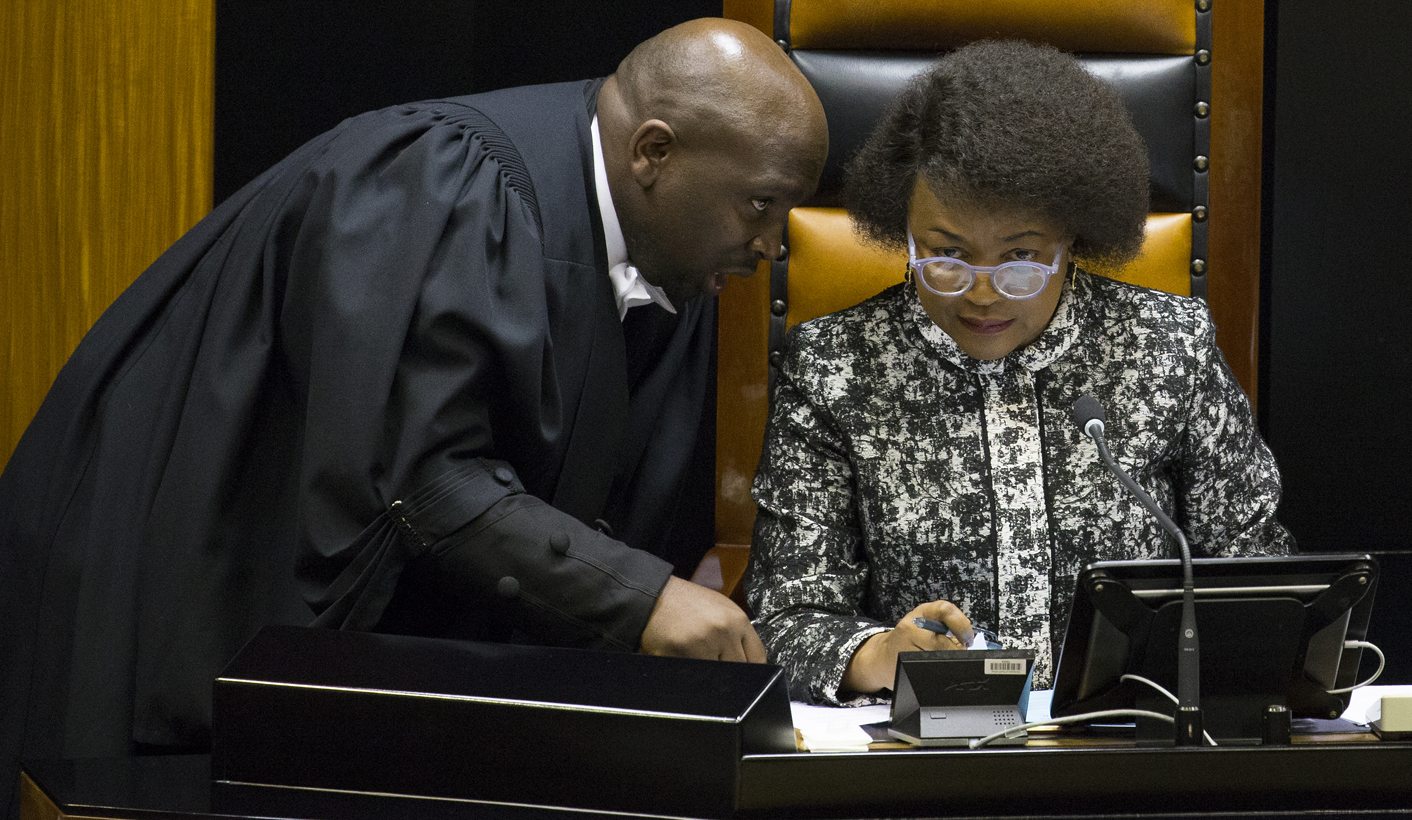 Before parliament broke for its 11-week “constituency break”, President Zuma’s cabinet promised to communicate its concerns about the recent chaos on the floor of the National Assembly. But parliament has now clocked off, and designated cabinet representative Cyril Ramaphosa has kept conspicuously silent. Besides, what could he possibly say to make things better? By MARIANNE MERTEN.

The ructions, fisticuffs and commotion in Parliament were discussed in this week’s Cabinet meeting, which expressed its “concern”. This emerged during Thursday’s traditional post-Cabinet media briefing, but Minister in the Presidency Jeff Radebe declined to answer questions on exactly what was discussed and decided. Instead he said there would be a “major statement… before Parliament rises” by the leader of government business. That’s one of Deputy President Cyril Ramaphosa’s many hats, effectively the liaison between the executive and Parliament. But Thursday, the national legislature’s last sitting before an 11-week “constituency period” ending in mid-August (well after the 3 August municipal poll) came and went without such a statement.

Some 19 months ago Ramaphosa tried to broker a political solution to the tensions in the House. The so-called truce came in the wake of rising tensions across the political landscape after the Economic Freedom Fighters’ “Pay back the money” campaign in August 2014 scuppered President Jacob Zuma’s questions session. It was unprecedented in democratic Parliament.

In mid-November 2014 the deputy president called together political party leaders at the presidential Tuynhuys offices in the parliamentary precinct. After several hours, there was an agreement to find a political solution to rising tensions, including establishing a multi-party committee to find solutions to restore Parliament’s decorum.

Then two processes unfolded. The sideshow was DA leader Mmusi Maimane coming under pressure from his own caucus which determined that a motion of censure against Zuma must go ahead (as it did). But what really killed off the truce was Ramaphosa coming under fire from fractious ANC factions. In the parliamentary ANC caucus, which includes ministers and deputy ministers, the view that ultimately prevailed was that Ramaphosa overstepped the line into the turf of Speaker Baleka Mbete, also ANC national chairperson.

The deal was off.

In the months that unfolded, tensions in Parliament simmered – and occasionally boiled over. Disruptions by points of order dominated, opposition accusations of bias against presiding officers became now routine, and security became an increasing consideration at the national legislature, a separate sphere of the state. The parliamentary protection services were beefed up with former police officers by August 2015.

There has been no let-up in the disruptions as both sides of the House dug in. Rule 53A, adopted at the end of July 2015, is increasingly invoked, and parliamentary protection services – the new job of chamber support officer was created for the so-called “bouncers” – spring into action regularly.

Twice this month ugly scenes unfolded as EFF MPs were manhandled out of the National Assembly after raising volleys of points of order questioning Zuma’s right to speak in the House, given the Constitutional Court ruling that he had violated his oath of office in the Nkandla saga. The first eviction ahead of the presidency budget debate at the start of May proceeded relatively painlessly. Not so at last week’s presidential question session, when blows were exchanged. The scuffles also involved water bottles and hard hats. The glass doors at the Poorthuis entrance were damaged and riot police called in, although the members of the public order police, as they are officially known, were not called into service.

Against this background – and Zuma telling Mbete to get “your House in order” after his reply to the presidency budget debate – came Thursday’s post-Cabinet statement. Under the heading of “Cabinet’s position on key issues in the environment”, point 4.8 said read: “Cabinet expressed concern at the disruptions in Parliament, which are increasing in frequency and intensity. Parliament is an institution of our hard fought democracy and a public platform, which must be respected by all.”

The statement does not really say very much. And nothing further was gleamed from Radebe, who swatted off questions by referring to the leader of government business’ “major statement”.

What will Ramaphosa say, 19 months after his initial attempts to try resolve tensions were scuppered by the governing party? And why is he now the correct person as leader of government business (traditionally since 1994 a post held by the deputy president) to make this “major statement” when he wasn’t 19 months ago?

Daily Maverick has confirmed a statement with regards to Cabinet’s “concern” over what is happening in Parliament is in the pipeline. But it is understood Ramaphosa was never scheduled to make such a statement on Thursday.

This raises further questions, given Radebe’s timeframe of “when Parliament rises” – unless he meant the end of the year for the traditional holidays, rather than the almost three month “constituency period” in the run-up to, and two weeks after, the 3 August local government elections.

A statement on Parliament by the leader of government business at Parliament surely should be made at Parliament? It would not bode well for the dignity and standing of Parliament if such a statement were to be made, say, at the Union Buildings, when there are plenty complaints from opposition parties, civil society and other observers that the current Parliament is kowtowing to the executive.

Thursday’s Cabinet expression of concern about Parliament came as National Assembly plodded through its business. It was relatively quiet in the absence of the EFF, suspended in accordance to parliamentary rules following their eviction ahead of the presidential question session on 17 May.

The noise levels may have been down a little, but the process did not stray off its predictable path. The electioneering, which characterised the past month’s budget debates, continued. Wednesday’s Africa Debate became a platform for the governing ANC to turn it into an occasion to extol its track-record, or as Deputy Energy Minister Themisile Majola put it: “We are the architects and midwives of this democracy”. After heckling from the DA benches about plans to acquire a multi-billion rand VVIP jet for Zuma, even as the defence force is cash-strapped, Defence Minister Nosiviwe Mapisa-Nqakula retorted: “I’m sure your former president before democracy used to fly SAA”.

The battle lines are deeply entrenched. While the EFF has pushed the rules to the limit, other opposition parties continue to play nicely within the bounds of the rules – regardless of grievances on speaking minutes, lack of off-the-cuff questions to ministers and the like. But the ANC narrative in Parliament, in summary, remains: We won the majority of votes, if you want to change anything, go and win a majority, but as the majority party in Parliament – the ANC holds 249 of the 400 National Assembly seats – the ANC leads in the national legislature as it leads in society.

In this context, the ructions, chaos and disruptions are a symptom of underlying lesions at Parliament. Much of the current parliamentary circus revolves around ANC internal politicking.

Up until the underlying causes are fixed – not by a Bandaid of new rules which were adopted on Thursday or by expanding the ever-lengthening list of unparliamentary expressions – the decorum, dignity and standing of the self-proclaimed people’s Parliament remains precarious. DM