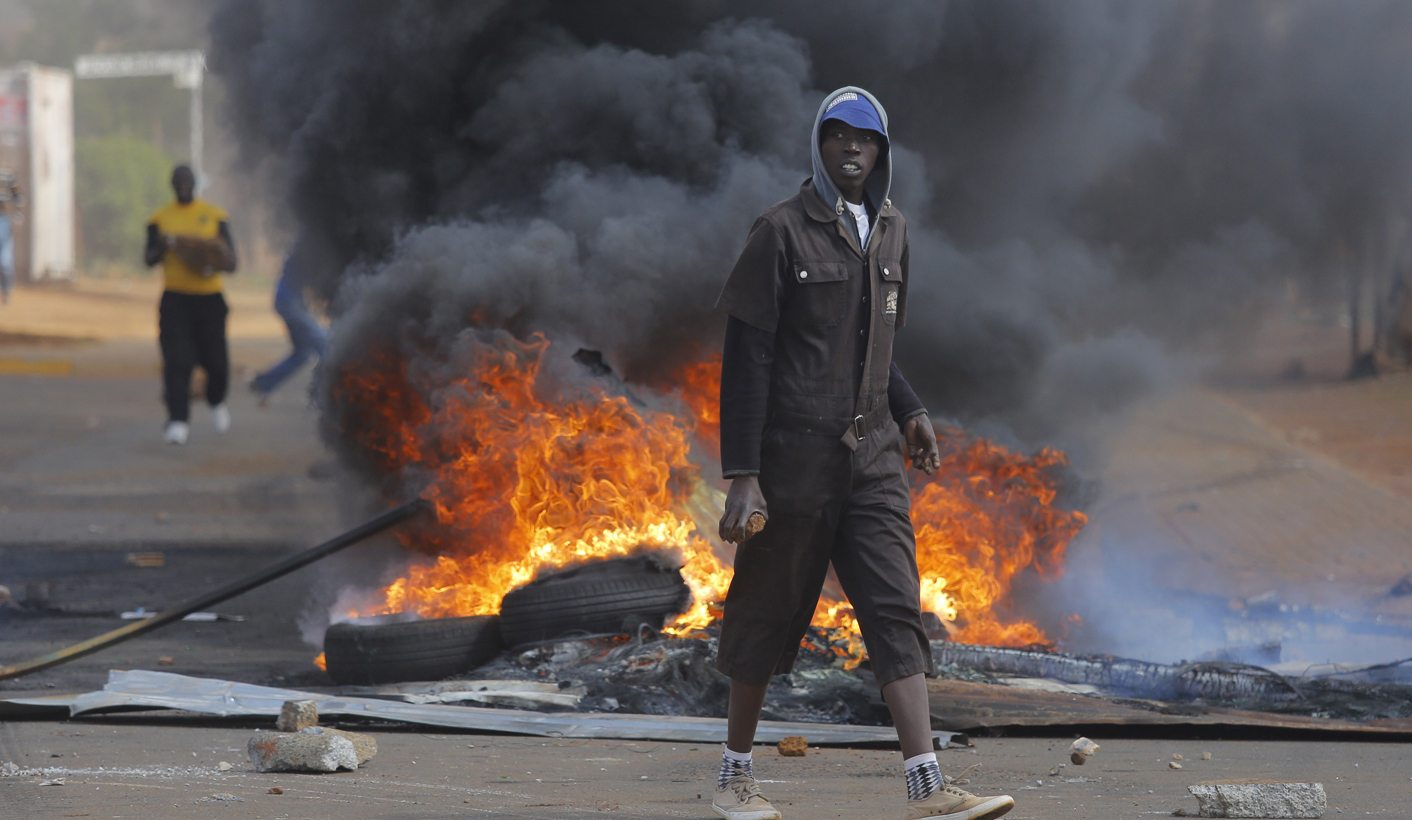 Amid a mood of nationwide gloom, the South African Institute for Race Relations (SAIRR) has released its latest report, a National Growth Strategy designed to turn the country’s economy around in record time. Is anyone going to listen? Should anyone listen? MARELISE VAN DER MERWE asked independent analyst Co-Pierre Georg, of the African Institute for Financial Markets and Risk Management, for a frank assessment.

Depending on how you look at it, it could be either the best or worst possible time for the South African Institute of Race Relations (SAIRR) to release its National Growth Strategy (NGS) to the public. With unemployment at a 12-year high, a ratings downgrade looming, the Finance Minister at the centre of a national outcry and the country having lost its place as the continent’s second-largest economy, 2016 has been something of a pessimist’s party.

Amid the storm, the SAIRR presented its report – a four-tiered plan entitled ‘National Growth Strategy: A plan to secure an economic turnaround over the years 2016 – 2018’ – in Century City, Cape Town, on Tuesday.

The report is not entirely pessimistic; it outlines the progress made thus far and lays out a strategy that it says can build the foundation for economic turnaround in two years. At its simplest, it seeks to: “(1) to improve capital inflows and foreign direct investment (FDI) into South Africa, so as to start raising the growth rate; (2) build and maintain essential economic and social infrastructure to stimulate growth and provide a solid foundation for further economic expansion; (3) translate increased growth into increased employment; and (4) help the disadvantaged climb the economic ladder to increased prosperity, while sustaining current social protection.”

The suggestions include avoiding onerous property laws that deter capital investment; creating an entrepreneur-friendly economic environment; and amending empowerment policies so that they are based on economic disadvantage rather than ethnicity. Substantial changes to labour law – some of which are bound to stir controversy – are also recommended, notably abolishing minimum wage and the introduction of mandatory pre-strike ballots and other controls. The National Growth Strategy draws heavily from the turnarounds of China and Singapore.

But is it usable? Dr Co-Pierre Georg, economist at the African Institute for Financial and Risk Management (AIFMRM) – whose research interests include financial crises and contagion as well as systemic risk – says the NGS is a little like a packet of wine gums: a few gems, but not all the contents are equally desirable. Rapid growth, he says, quoting Deirdre McCloskey’s recent essay in the Wall Street Journal, is more likely to come from “ideas having sex”. Daily Maverick asked him to lay out the nuts and bolts.

At the moment we seem to have a great deal to choose from. But in your view, what are the primary risk factors threatening economic growth and what would be the most effective way to manage them?

The most visible risk South Africa is facing at the moment is policy uncertainty. The distressing reports about the Hawks’ investigation of Finance Minister [Pravin] Gordhan are a case in point. We are at a critical juncture with the looming ratings downgrade, and National Treasury is to be commended for their efforts to stabilise the economy. The biggest risk overall, I think, is state capture. The Gupta saga and the ongoing battle about SAA are only two examples. We have strong institutions, including an independent judiciary and strong Treasury and Reserve Bank, but these institutions are under attack by rent-seekers hiding in the shadows of the ANC.

Factionalism in the ruling party as well as corruption in government are obvious problems. The SAIRR underlined the importance of reversing these trends. Is it realistic to say this might occur?

Factionalism within the ANC will not just magically disappear over the next years. Even if there is a rupture in the tri-party alliance and a new social democratic or socialist party is formed, the remaining ANC will still be split between rural and urban interests. There is a very natural remedy for both factionalism and corruption: force the ruling party into a coalition and enforce checks and balances.

You seem unconvinced that a coalition is likely or workable, though.

The past elections have seen the emergence of new parties. Agang collapsed before the election, the EFF are likely to stay. So I think one of two things can happen. Either we see a rift in the tri-party alliance with the emergence of a new left-leaning party that could form a coalition with the EFF, or we might see something completely new – perhaps a party for young people, emerging from the student movement for free education.

What major trends do you anticipate on the local political and economic landscape in the next few years?

The debate about coalitions in the municipal elections highlight what I think is the key political debate of the next few years, namely what happens when the ANC will lose its outright majority. Perhaps the micro-parties in parliament together can make up the shortfall. But if the EFF continue to lure the young and angry to vote for them, the ANC will inevitably drop below the magic 50% mark. The big question is: what will happen then? It is hardly conceivable that the EFF will give up their revolutionary rhetoric and team up with their nemesis. At the same time, it is difficult to imagine that the DA would help the ANC to stay in power – why would we need them anymore? And a DA/EFF coalition is equally difficult to imagine. How this stalemate is resolved will determine economic policy in the years to come.

On a more fundamental level, the key economic challenge is our education system. Painfully high unemployment and significant skills shortage make a toxic mix. What we need is a fundamental shift in education policy, in particular with regard to the capture of our schools by SADTU. We desperately need an opposition to this capture and enforce minimum standards for teachers.

Looking at the SAIRR report, what aspects do you believe are most on point?

Two aspects strike me as particularly useful. Firstly, the focus on enhancing foreign direct investment. Openness to trade and investment is one of the key ingredients for economic growth. As the IRR points out, we need to ensure and strengthen property rights because property rights are crucial to attracting foreign investors. The other aspect is their emphasis of public-private partnerships. Take the Gautrain as an example. It works perfectly and is changing transportation in Gauteng. We need to encourage more partnerships like this, in particular in the infrastructure sector.

What are your primary criticisms?

The report is lopsided and ignores one of South Africa’s most critical social ills: rampant inequality. We are one of the most unequal countries in the world and the cold, hard truth is that the wealthy in the country do not contribute as much as they need to. The report also has unrealistic expectations for growth once its policies would be implemented. There is no magic cure for the economy. And there would be massive push-back to the neoliberal policies the IRR proposes. Rather than pushing an agenda on either the left or liberal side, I think South Africa needs a national dialogue about a shared vision for the economy.

The SAIRR (and others) have argued that the current social grant system is unsustainable. What are your views?

Unfortunately, the report is likely to be correct in this assessment. We have a rapidly growing population and too many South Africans, in particular young South Africans, depend on social grants. The ANC has financed social spending through more debt, which is a deadly sin from an economist’s perspective. Debt must be used for investment or it is simply a redistribution from future generations to the current generation. Young people will have to pay for all this debt with their future taxes, which will limit the future potential for growth.

The report did not appear to take into account a possible backlash from implementing policies that could meet with widespread ideological resistance. Is this a valid concern?

It is a concern. The report seems to neglect several second-round effects of their policies. We just come out of a period of extensive strikes in key sectors of the economy. If the IRR’s suggestions were to be adopted by the government, we would likely see another round of strikes. The problem of the report is precisely that it is lopsided. If it were more balanced and included a heavier burden on the wealthy, labour unions would be more likely to accept some of the painful but necessary policies the report outlines.

Do you think there is such a thing as neat or simple turnaround strategy for South Africa’s economy?

Fortunately, most of our economic problems come from bad implementation of policy rather than from bad policies. Voting for the opposition in the upcoming elections is therefore the most effective way to get our economy back on track. The municipal elections are perfect to test coalitions in some of the country’s metros. Maybe this is already sufficient to empower the reformers within the ANC and help them to get rid of the rent-seekers around Zuma. DM

Photo: A man walks in front of burning tires during on going clashes with police forces in Bekkersdal near Johannesburg, South Africa, 24 October 2013. EPA/KIM LUDBROOK.