Trashocracy: What rubbish reveals about our nation 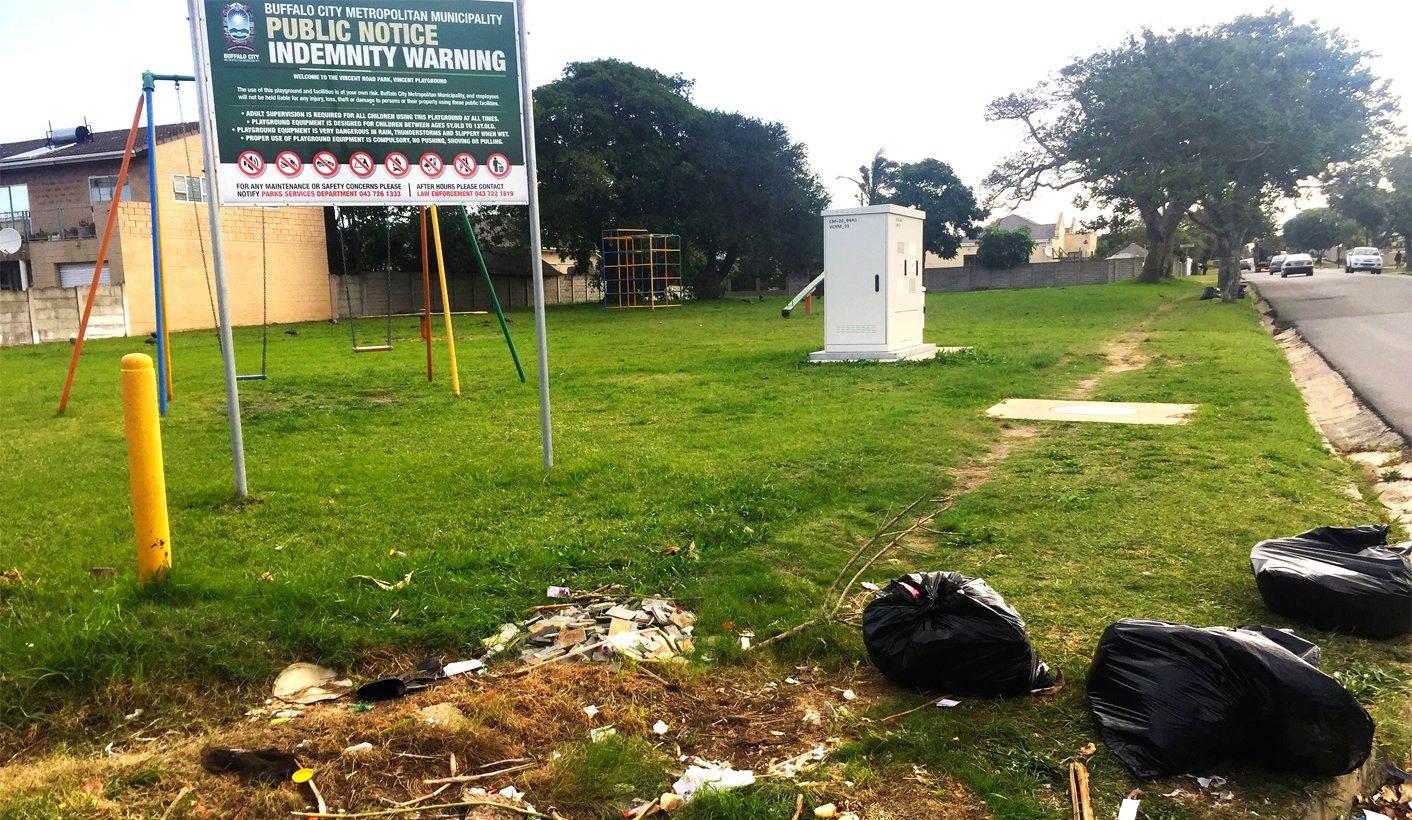 This week, Durban beaches were closed to the public when medical waste washed up across kilometres of shoreline. When hazardous matter ends up in the wrong places – when waste is displaced – we panic. Or do we? REBECCA HODES has been collecting rubbish in neighbourhoods around the Eastern Cape for the last three years. She describes what this rubbish reveals about sanitation and social justice in South Africa today.

On Monday 16 May, a man strolling along a Durban beach discovered some strange litter. A refuse dump gone awry had deposited medical waste across several kilometres of the local coastline. The man reported what he had seen to local authorities, which decided to close the beaches. The eThekwini Municipality implored the public to keep away until the clean-up operation was conducted, after which the beaches would be safe again.

Munipical officials vowed that no syringes were detected among the medical waste, while an eNCA news broadcast on Wednesday evening claimed otherwise. Local government authorities confirmed that pill packets and condoms were among the litter, and vowed that they would trace the culprits.

Medical waste poses a serious threat to public health and safety, which is why the authorities reacted as they did. But this is only part of the story. Many areas in South Africa are dumping grounds for rubbish. They are not just excluded from government sanitation services: they are the landfills and sewage depots.

When asked about sanitation systems in the informal settlement in which she works, a nurse explained: “These people are drinking sewage water. In Zuma’s Nkandla home, the pigs are living in better conditions than human beings. These people here, they are eating their own waste.”

Waste – human and industrial – has a particular hold on the public imagination. In what anthropologist Steven Robins has dubbed “poo politic”, human waste is a medium for civic action in present-day South Africa.

The Social Justice Coalition has, for years, focused on how waste is captured and removed in its campaign to improve service delivery. Its social audit of toilets has combined grassroots advocacy, awareness raising and mobilisation with an epic endeavour in citizens’ science: to capture and disseminate empirical and experiential evidence about poor service delivery.

Their movement has documented violations of human dignity, while holding steadfast to a particular meaning and value of dignity. Their objective is to advance the rights to health, sanitation and social justice, but working within a framework of democratic citizenship which seeks to uphold and to strengthen, rather than collapse, the rule of law.

Other political activists, aligned to the Ses’khona People’s Rights Movement or Rhodes Must Fall, have relinquished these advocacy conventions. They have used waste more directly: to confront and incite the public through the sensory assault of stench. By violating among the oldest and most widespread of human habits – the separation and removal of sewage – they have transformed the institutions and monuments they revile from sites, to sources, of abhorrence.

But these examples of pollution – of waste washing up on pristine beaches, or being lobbed at public monuments – are in some ways a distraction. They convey that infractions in waste management, especially medical detritus and sewage, are anomalous. They provide titillating headlines, exciting images, and eminently retweetable hyperlinks. However, because these focus on what happens when waste is displaced, when trash ends up where it is not supposed to, they obscure the wider realities about rubbish in South Africa today.

As part of a study about health in the Eastern Cape, I have gathered and analysed rubbish over the last three years, with a focus on medical waste. I have collected rubbish from poor, middle-class and wealthy areas, including Beacon Bay, Bhisho, Breitbach, Dimbaza, Duncan Village, Ginsburg, Gompo, Mdantsane, Nahoon, Quigney, Vincent and Zwelitsha.

I have picked up litter from pavements outside hospitals and clinics, where you might expect to find medical detritus (prescription pill boxes, used swabs, condoms), and from public places where people gather, work, shop and play. Rubbish collected from the streets around taxi ranks, markets, malls, shebeens and brothels showed what products people used to sustain and enjoy themselves (energy boosters, painkillers, cigarettes, vitamins, sexual performance aids, drugs and booze, condoms). Litter around schools and sportsfields revealed what parents know already: children love chips, sweets and fizzy drinks, and have a propensity to lose their school stationery.

Because of inadequate sanitation services, many South African neighbourhoods do not have reliable waste removal. Rubbish accumulates around people’s homes: dangerous immediately or belatedly. Cans rust into tetanus risks, glass bottles become shards. Trash of all kinds attracts rats, flies and other pests, introducing germs, into people’s bodies and environments.

Children are at particular risk from this exposure. They play outside, like to discover and handle curious objects, and are not traditional sticklers for hand-washing. Rubbish, vuilgoed or inkukuma may be contraband at home and school, but it can be fun galore with friends. As a grandmother living in Mdantsane explained: “The children, they take dirty things [inkukuma] outside, and play with it. They take it from the dustbin, or they find it in the gutters. They look through the black bags for something they can play with. Some don’t have toys, so they will use it as their toys to make houses, saying ‘This is my room, this is my home’.”

On Friday 20 May, five days after medical waste washed up on Durban beaches, the eThekwini municipality re-opened the beaches. A round-the-clock operation by municipal workers had cleared the trash, and the beaches were declared safe for the public.

On the same day, the Eastern Cape’s Daily Dispatch reported that residents of the Buffalo City Metro had complained to local authorities about “uncollected waste and filthy streets”. Reporters visited a metro depot in King William’s Town, where they discovered hundreds of black wheelie bins stacked in a yard. Monde Ciko, the head of the ratepayers’ association in King William’s Town and Bhisho, explained that the bins were meant for local residents to improve sanitation and waste disposal. But, rather than being distributed, they had remained at the depot for almost three years – weathering slowly, but emptily.

Under apartheid, black South Africans were regarded as migrant labourers in white cities, while their citizenship was relegated to puppet states in the country’s poorest and most arable regions. Apartheid’s critics cut through the mendacity of “separate development”, repudiating the rhetoric of Nationalist officialdom. They referred to the bantustans not as “homelands” for “surplus peoples”, but as “dumping grounds” for women, children, the elderly, and others excluded from the apartheid wage economy.

In the post-apartheid present, the allegory still applies. Erstwhile bantustans remain “dumping grounds” for poor and unemployed people, whose prospects for employment and economic advancement are limited. While social grants help to sustain meagre household economies, the promised “better life for all” has not materialised for thousands of families that live in these neighbourhoods.

Once the heartland of the anti-apartheid resistance, democracy has not meant the provision of even the most basic of sanitation services – the removal of waste – for millions of citizens. The geographic demarcation of apartheid bantustans was abandoned after South Africa’s democratic transition, but the poverty and deprivation of these areas is not just a fact of history. Today, the metaphor of bantustans as “dumping grounds” is literal, in the reality, and ubiquity, of rubbish itself. DM

Rebecca Hodes is a medical historian at the University of Cape Town.

Main photo: Uncollected rubbish next to a playground in East London. Glass, tins and condoms were among the garbage. (Photo: Rebecca Hodes)