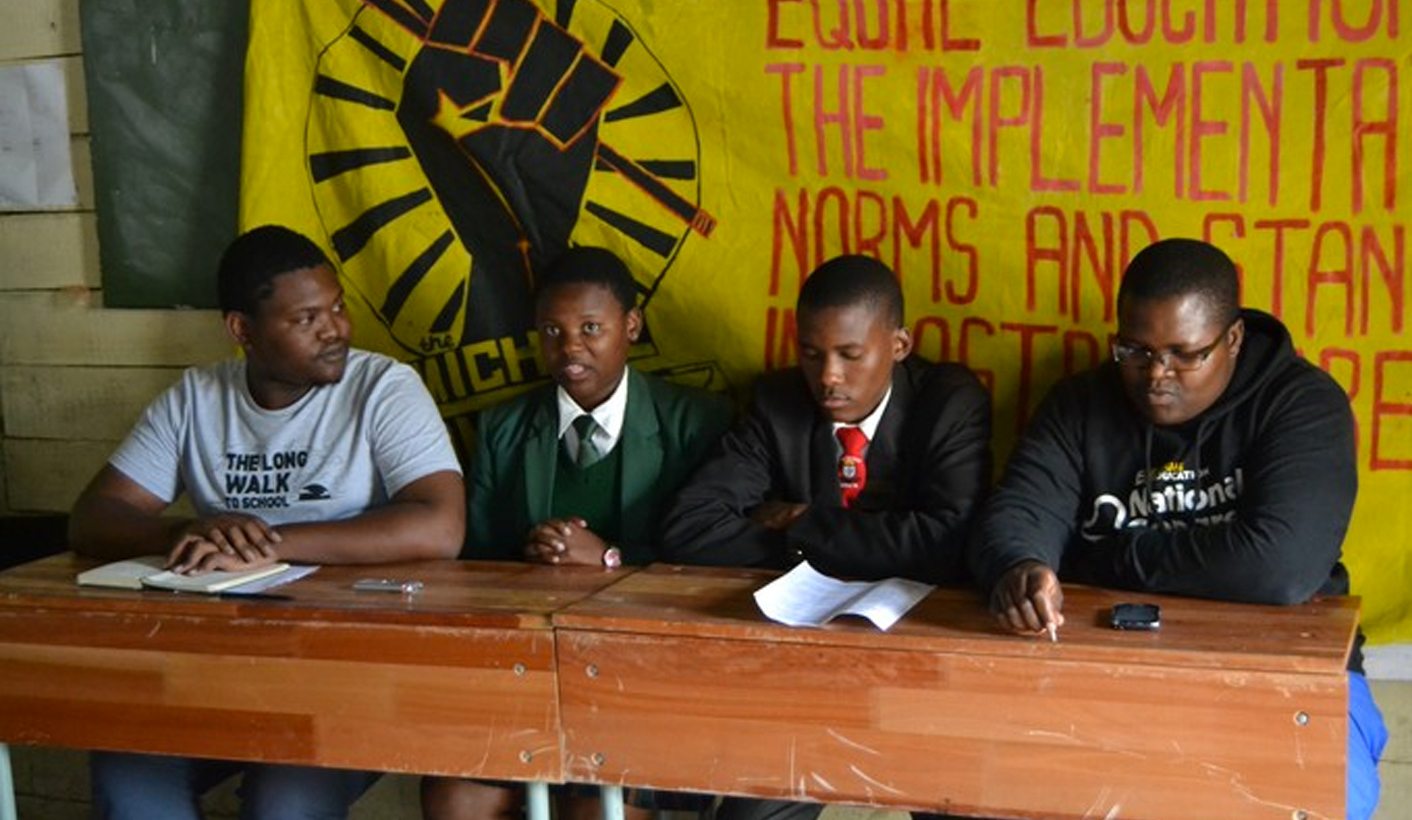 Equal Education chose Qonce High School to hold a press briefing after filing papers in the Bhisho High Court to force Minister of Basic Education Angie Motshekga to act on the regulations for infrastructure in schools. By Nombulelo Damba-Hendrik for GROUNDUP.

Qonce High School in King William’s Town has two toilets for 250 pupils. The toilets are broken and there is water on the floor.

Equal Education chose the school for a press briefing after filing papers in the Bhisho High Court on 19 May to force the minister of Basic Education, Angie Motshekga, to act on the regulations for infrastructure in schools.

When GroundUp arrived for the briefing, the school principal was trying to fix a shack at the back of the school which is used as a Grade 8 class. The tables were broken and there were planks falling from the wall. The sky was visible through holes in the cardboard ceiling.

Student Ziyanda Gaxa, who was among those who filed the court papers, said rain came into the classroom in winter.

“I study in this classroom and it’s always cold. When I came here for registration, I could not believe it when I was told this is a school. I was very shocked to hear that I was going to study in a shack,” said Gaxa.

Under pressure from Equal Education, in late 2013 the minister published minimum infrastructure standards for all schools in the country. But Equal Education says there are flaws in the regulations and successive attempts to engage with the minister have failed.

Equal Education says each of the provincial MECs was supposed to produce a report by November 2014 detailing backlogs in school infrastructure and plans to fix them. But the plans were delayed.

Equal Education now wants the court to order the minister to change the regulations so that she is obliged to release all reports received within a reasonable period.

“The November 2016 Norms and Standards deadline is looming. All schools lacking water and electricity must be helped before then,” said Equal Education in a statement. “Department of Basic Education 2015 statistics put these at 452 and 913 respectively. DBE figures also indicate 128 schools have no sanitation facilities.  These schools must also receive these facilities by this deadline.”

Equal Education said 10,419 schools only had pit latrines, 4,773 had an unreliable water supply and 2,854 an unreliable electricity supply.

“However, it is likely that the 2016 deadline and all other deadlines will not be properly realised, as long as the minister continues to shield the department and herself from the responsibility to fulfill the norms.”

Zukhanye Gibe from Vukile Tshwete High School was also in court to file the papers.

He said he wished Motshekga or Eastern Cape Department of Education MEC Mandla Makupula could visit his school to see for themselves the conditions under which students study.

He said most students walked for 30 minutes to and from school every day, through the bush.

“I really could not believe that the place I was going to is a school. We study in fear that one day someone will come to the school and rob our teachers, or rape a student, because the school is in bushes. We see big snakes now and then,” he said.

Elijah Mhlanga, spokesman for Motshekga, said on Monday said he was not aware of the papers filed in court. He said he had seen the Equal Education statement but did not understand why Equal Education had taken the matter to court. DM