Zuma, Jiba, Abrahams – a day of delaying the delayed delay 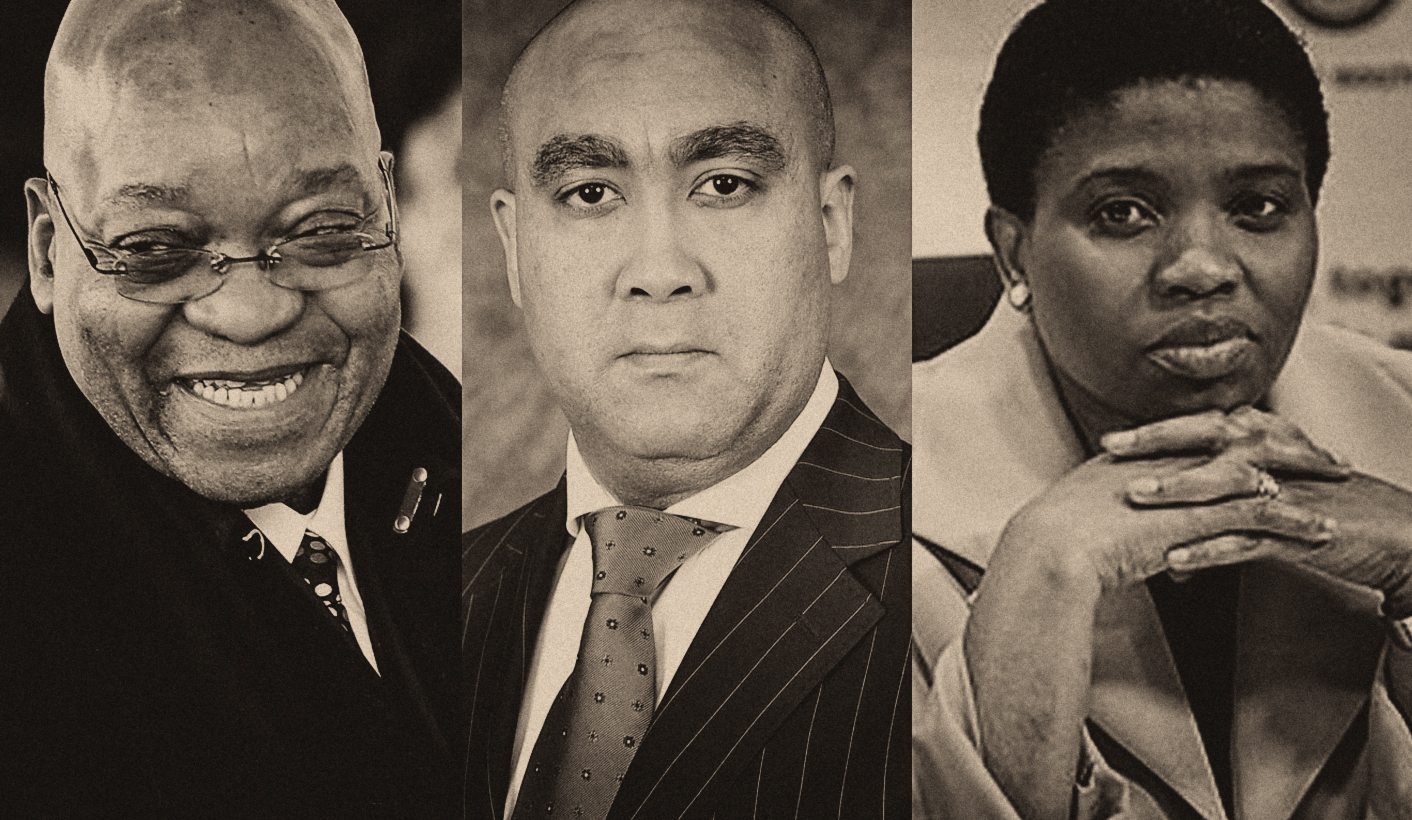 The Judge President of the Western Cape Division of the High Court is the controversial Judge John Hlophe who still possibly faces a JSC misconduct hearing with regard to an alleged attempt at influencing two ConCourt judges in 2008 in criminal matters involving Jacob Zuma and the arms deal. It is Hlophe who must assign judges to hear matters in the region. Each time the Democratic Alliance vs the Deputy Director of National Public Prosecutions Nomgcobo Jiba (and others) appears on the roll in this division the same junior judge, Judge Mokgoatji Dolamo, is assigned the case. Coincidence? By MARIANNE THAMM.

It took Judge Dolamo, an attorney who was leapfrogged into the Western Cape judiciary in February 2013, about 45 seconds on Monday to dismiss the Democratic Alliance’s application for the suspension of National Prosecuting Authority’s National Deputy Director of Public Prosecutions, Nomgcobo Jiba, and the appointment of a Commission of inquiry into her fitness to hold office.

The controversial Jiba has over the years been seared by 12 judges on four benches in three massively high-profile matters, including for her role in the Zuma “spy tapes” matter, for her delays in the Freedom Under Law case regarding the dropping of charges including fraud and murder against former Crime Intelligence Head Richard Mdluli (a Zuma ally), and for her decision to charge KwaZulu-Natal Hawks head, Johan Booysen (who was investigating people close to President Zuma’s family).

Jiba was later charged with perjury and for lying under oath in the Booysen matter but new NPA head Shaun Abrahams withdrew the charges soon after taking office, claiming he had done so based on the decision of another prosecutor, Advocate Marshall Mokgathle. This was later contradicted, however, in an explosive affidavit by another NPA deputy, Willie Hofmeyr (he has since been shafted to Legal Affairs), who said Abrahams had disregarded legal opinion from two other NPA prosecutors.

More or less the same time that Abrahams was announcing in Pretoria that the NPA would be appealing the SCA ruling that charges of corruption, fraud and racketeering be reinstated against President Jacob Zuma, and while Nomgcobo Jiba perched on a white couch behind him, about 1,500km away in Cape Town Judge Dolamo, a rather junior judge for such a high-profile matter, was dismissing the DA application to have her removed from this hugely powerful position.

Dolamo said that while the case appeared “at first blush” to be a straightforward review application “into the failure to exercise, alternatively, the unlawful exercise by the president of the powers vested upon him”, beneath this “are layers of intrigue, involving allegations of career sabotage, power struggles and political interference in the National Prosecuting Authority, an institution supposed to be independent and which is mandated by the Constitution of the Republic of South Africa to prosecute without fear, favour or prejudice, in the protection and advancement of democracy.”

In Pretoria, Abrahams, who sounded like a recorded GPS voice much of the time during the presser on Monday, also went to some lengths to talk the talk of being independent, claiming he wasn’t a passenger in anyone else’s vehicle. He said that the NPA would argue that its national director (he, himself) was best placed to decide whether abuses in the prosecuting process should lead to a discontinuation of a case.

In other words, stop getting in the way.

Judge Dolamo did not immediately provide reasons for his 45-second dismissal of the DA’s application in the Western Cape High Court but later supplied a 54-page judgment in which he stated that he did not find it irrational that President Jacob Zuma had opted to wait for the decision of the General Bar Council (GCB) application to have Jiba struck off the role before considering her suspension (or not).

He said that it had been the judicial criticism of Jiba in three cases that had prompted the DA to launch its application in a bid to protect the integrity of the NPA.

But, he added, the DA’s application had been made “in the context of what the various courts were gleaning from papers which were filed off record. The president, on the other hand, was not only dealing with the record of the various proceedings and the comments made by by the various judges, but has the benefit of Advocate Jiba’s response thereto as well as Advocate Abrahams’ input on the state of affairs in the NPA.”

An insider’s view in other words, we take it.

Judge Dolamo added, “All these may have tipped the scales to the extent that the president in his wisdom and in the exercise of the discretionary powers in terms of sections 12 (6) (a) deemed it advisable to await the judicial interpretation which can be achieved in the GCB application. This, in my view, is not an abdication of responsibility by the president but a cautious approach dictated by the circumstances.”

He continued that he was not convinced that Jiba’s presence affected public perception of the NPA, that the idea that President Zuma had not taken action against her in spite of several damning judgments was “pure speculation” and that he did not agree with the DA’s “simplistic view” that the president only needed to ask himself whether the allegations against Jiba were serious enough to warrant suspension and an investigation.

Judge Dolamo has travelled some way with the DA in this matter, ruling against the party in February this year when it sought to use the affidavit by Hofmeyr to bolster its case against Jiba. The case was also postponed earlier when Dolamo was absent due to a family commitment and it was not assigned to another judge.

Folded into a later statement by the DA’s Shadow Minister of Justice Glynnis Breytenbach on Monday, that “given the seriousness of the matters contained in this application the DA feels that it important that these matters be ventilated further in a different court that might come to a different determination”, is a hint that it does not trust Judge Dolamo’s judgement.

How another court will rule will flush out (or not) any political stealth bombs.

The DA has said that it was “telling” that the three cases in which Jiba had “acted dishonestly concerned serious charges against the president and senior members of the SAPS aligned to the president”.

“The cases were all extremely politically sensitive. They are exactly the types of cases in which an honest, independent DNDPP is absolutely vital, and where the failure to exhibit those qualities undermines the integrity and the independence of the NPA as a whole. Yet in all three cases, Adv Jiba demonstrated that she lacked the basic integrity, independence, diligence and conscientiousness to perform the functions of the NDPP, or a DNDPP. It is expressly for these reasons that Adv Jiba cannot be a senior office bearer while the NPA is seized with handling the Zuma Corruption Case. This is particularly while we have an NDPP who has proven in his short tenure to be a Zuma acolyte puppeteered by Adv Jiba whose sole preoccupation is to protect President Zuma no matter the consequences for the Rule of Law, due process and the Constitution.”

It is extraordinary that you need only scratch the surface of the judiciary in this country to find Jacob Zuma lurking somewhere. When he was appointed to the bench in 2013 in spite of a raft of old law society disciplinary issues, Judge Dolamo leapfrogged over Jeremy Gauntlett SC who was one of the other candidates for the bench in the division. Gauntlett went on to defend President Jacob Zuma in the Constitutional Court Nkandla matter.

Jacob Zuma and his legal woes dominated the newswires and the courts on Monday. His handpicked disciple, SABC COO Hlaudi Motsoeneng, found his appeal against a judgment setting aside his permanent appointment dismissed by Judge Dennis Davis in the Western Cape High Court, also on Monday.

The DA said in that case the verdict was an indictment of Minister of Communications Faith Muthambi who “has shown persistent disregard for the rule of law and has managed the SABC as her personal fiefdom, subject only to her patron President Jacob Zuma”.

President Zuma’s Stalingrad Strategy, which has seen him evade the court for over 15 years, has worked well for him as well as those loyalists who have positioned themselves around him.

Late on Monday night a clearly emboldened President Zuma released a statement that he too would be appealing the decision of the Gauteng High Court to reinstate the corruption, racketeering and fraud charges.

The President has clearly taken different legal advice which just happened to dovetail with Shaun Abrahams’ independent thoughts on the matter.

In the end the real battle of Stalingrad had to end and those left standing had to count the cost and bury the casualties. This too shall pass, but clearly not without a costly showdown in the country’s courtrooms. DM