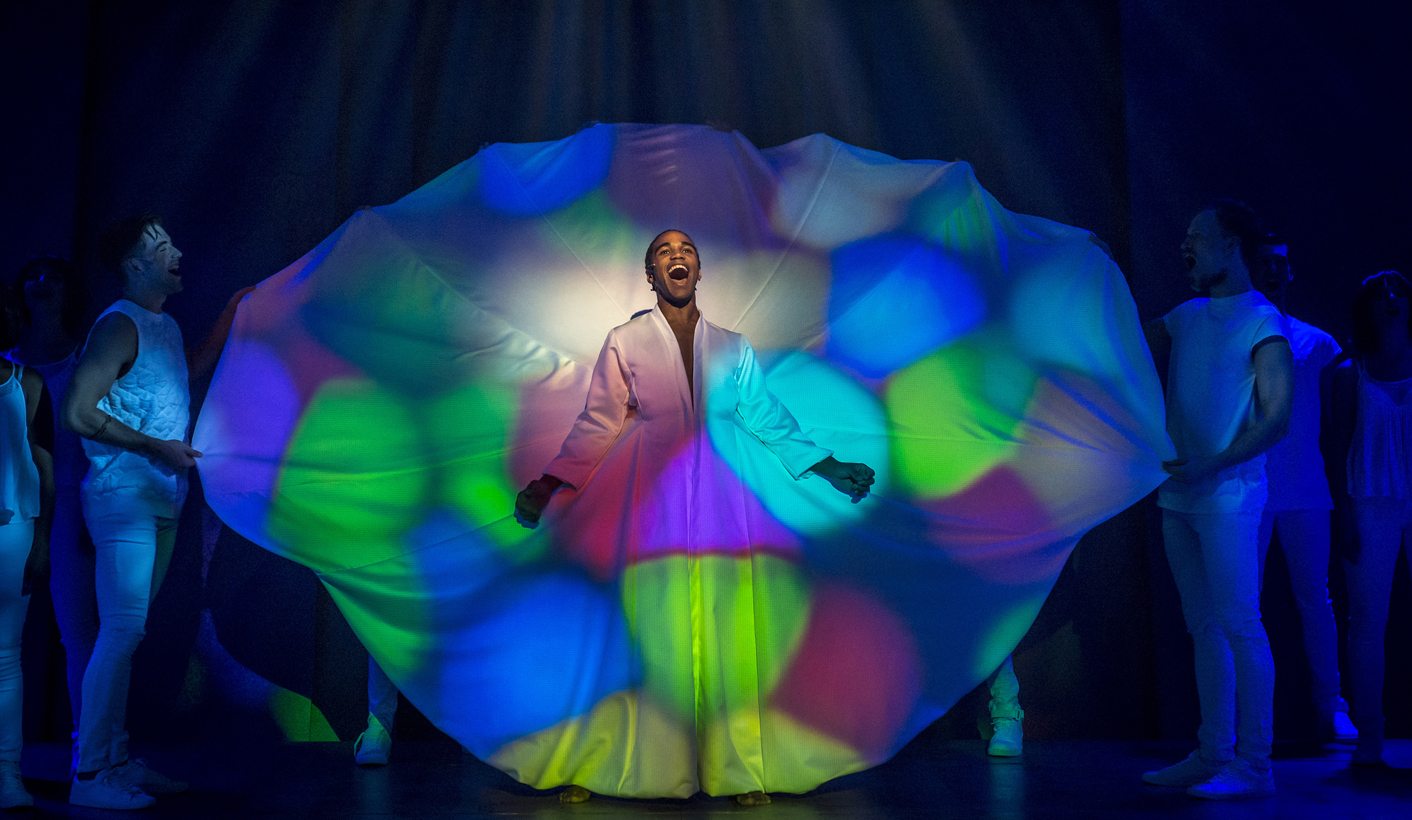 When the jail cell closed and Joseph fell to his knees in a stark beam of limelight, I wasn’t ready. By LESLEY STONES.

This new production of that favourite old musical, Joseph and the Amazing Technicolor Dreamcoat, hadn’t pulled me in enough yet to try to tug my heartstrings with the powerful number, Close Any Door To Me.

A whole generation of us grew up with Joseph as one of the first shows we ever saw, or took part in at school, mesmerising us so much that the theatre became part of our lives.

I hope this new-look, shiny, flashy Joseph will do the same for the rows of school kids being bused in every day. It’s a show made for this age group, with a pantomime feel, lots of glittering costumes, little tricks, topical touches and flashy effects, including dazzling side lights that blaze to temporarily blind you, and probably annoy the hell out of anyone older than 16.

The music has been given some fresh arrangements and is delivered by a live band. For me, Close Every Door has lost its clean, power-packed purity, and in a few other songs the witty Tim Rice lyrics were no longer clearly audible.

We have the bubbly narrator Bianca le Grange to guide us through the show, with a voice lacking the authority to take that lead. Maybe that’s deliberate, to make this a more collaborative, supportive affair where everyone is an equal star and no one really shines. But I want at least Joseph to strut his stuff with a little more panache and give it some balls.

Earl Gregory plays the 12th brother destined for great things, reviving the role that he first played in 2004 fresh out of university. He still looks lovely and youthful, with a good voice that somehow fails to raise the rafters or your goosebumps.

It falls to Jonathan Roxmouth to bring in a real punch of personality as the rock ‘n roll Pharaoh, and he does it delightfully. He’s not on for long, but he makes it his show. Again the sound mix lets things down, however, and when Josephs politely tells the Pharaoh he didn’t quite catch what he sang about the cows, he was speaking for all of us.

There’s another memorable moment in Those Canaan Days, a thoughtful, reflective number where Michael McMeeking as Gad shows a talent that until then has been confined to the chorus line among the brothers.

The stage is relatively small when you’re dividing it between 12 blokes, a dad, a narrator and some dancing girls, and choreographer Duane Alexander has done well to deliver energy and vibrancy. They’ve got the moves, they just haven’t got much space. The costumes by Niall Griffin are in turn camp, colourful and then entertainingly raunchy for the Potiphar number, where Mila de Biaggi ramps up her saucy seduction in another standout scene.

I saw the show long after the opening night exuberance, and it’s well into its run now with a fairly gruelling schedule of performances. I don’t think the energy was lagging, and there are lots of fun touches, but there was rarely a moment when I wasn’t fully aware I was watching a production, rather than actually feeling drawn into it and caring about any of the characters.

The seats are selling well, which is absolutely fabulous. Just don’t take your crotchety old aunt along. DM

Joseph and the Amazing Technicolor Dreamcoat runs at Montecasino’s Pieter Toerien Theatre until 7 August then runs at Cape Town’s Theatre on the Bay from August 12-November 5.