Charles Abrahams, silicosis attorney: ‘Someone has to...

Charles Abrahams, silicosis attorney: ‘Someone has to bat for the underdogs’ 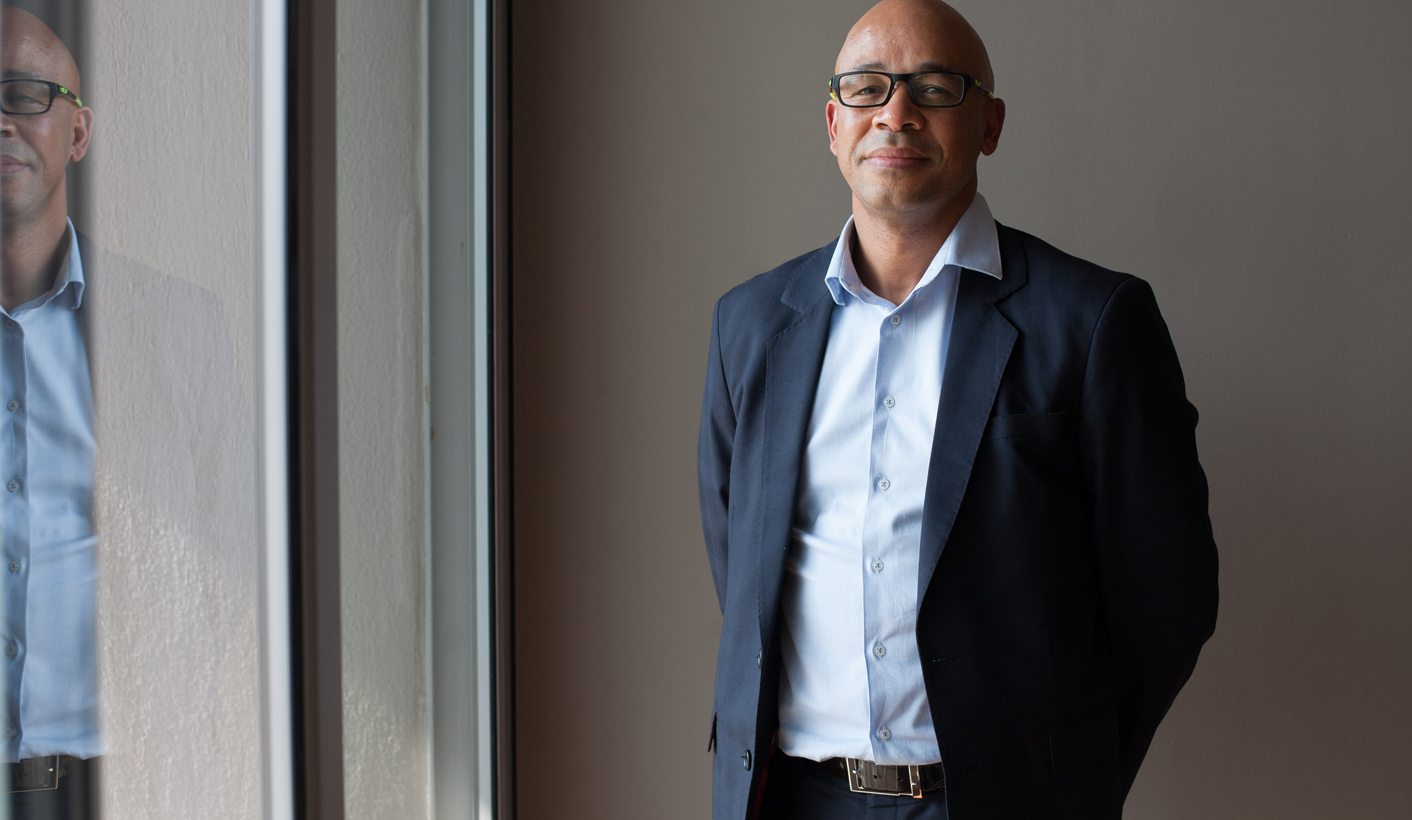 Two weeks ago, gold mineworkers won a historic judgment allowing them to proceed with class action suits against mining companies for silicosis and tuberculosis. GREG NICOLSON speaks to one of their lead attorneys, fighting to hold corporate SA to account.

Sitting in the foyer of the Radisson Blu, Charles Abrahams looked past the hotel pool towards a Sandton construction site. Downstairs, delegates were meeting to discuss compensating mineworkers for occupational diseases, an issue Abrahams has worked to bring to the fore.

“You grow up in a world where the more money and power you have the more human you become – that’s how I grew up – and that’s exactly why mineworkers have been viewed as nothing but fucking numbers,” said the attorney, who has built a reputation for taking on corporates who have avoided legal accountability, before and after 1994.

Abrahams was raised in Nooitgedacht on the Cape Flats. His mother, an assistant nurse, and father, a truck driver, raised 11 children on what Abrahams describes as a violent street in a violent township. At high school he got involved in student politics and was detained in 1985, missing his matric exams, meaning he had to write them the next year. “It left me with a gap year, in terms of figuring out what I wanted to do.”

He attended political classes in the community and realised the need for lawyers. “The politics made me realise that’s what we needed,” he said on Friday, finishing an apple while quietly remembering his upbringing.

Abrahams had only R50 to enrol at the University of Western Cape, but a scholarship from Black Sash covered his first year. Then, without money to continue into second year, he dropped out. With a year’s worth of legal training, he decided to launch a legal advice office in Nooitgedacht, helping where he could and referring more challenging matters to the Legal Resources Centre (LRC).

“I could see the importance [of the work], I could see people’s issues, simple issues, that we take for granted but for other people it’s their lives.”

Labour issues were common; employees often got in trouble at work when they needed to care for their children. So, Abrahams founded his community’s first crèche.

Studying part time, he finally completed his law degree in 1994 and rushed to complete articles at LRC. He was determined to start his own practice, which he did straight after he finished his articles, opening an office in his parents’ house. He started with mostly criminal matters, representing “those that people call scum” – thieves, rapists, murderers – people Abrahams grew up with who had taken a different path.

In 1998, he won a scholarship to work with London-based Cloisters Chambers, recognised for its work in human rights, civil liberties and equalities law, and was exposed to legal greats such as Sir Sydney Kentridge. “Those four months changed things for me,” said Abrahams. It grew his interest in human rights and public international law, which led to his master’s thesis on apartheid debt and international law.

“It dawned on me that the relationship between capitalism and politics in any society is in fact an incestuous one. Invariably, apartheid could never have happened without the involvement of capitalism,” said Abrahams. Working with the Khulumani Support Group, he sued, through United States courts, multinationals accused of supporting the apartheid regime. The cases have in the main failed, with actions against two companies continuing, but it gave Abrahams the confidence to focus on issues within South Africa and led to his following career-defining cases at home.

A decade ago, Abrahams met attorney Richard Spoor, who had just worked on a class action on behalf of asbestos miners. They shared similar legal ambitions and both knew there was something to pursue in South Africa’s gold mining industry, one of the bedrocks of the economy. They settled on silicosis and decided to test the law on whether a mineworker could sue a company for damages. Up until then workers were entitled to state compensation for occupational lung diseases, not compensation from the company, and the lawyers were taking a gamble, the idea of a future class action case almost unfathomable.

Abrahams and Spoor travelled throughout Eastern Cape speaking to former mineworkers. They decided to go forward with one man’s claim: Thembekile Mankayi. Recalling a meeting at Walter Sisulu University, Abrahams said, “You know how you see death in someone’s face?”

Their case failed in both the South Gauteng High Court and the Supreme Court of Appeal before it was heard in the Constitutional Court. On the day of the judgment, Abrahams couldn’t afford to fly to Johannesburg. He’d put so much time into the work that wasn’t paid, he’d left paying work on his desk. Mankayi’s victory was historic for mineworkers and sweet for Abrahams, but it was soaked in sadness as Mankayi had already died.

While working on the mineworker’s case, Abrahams won a significant victory at the SCA. Working with the Children’s Resource Centre and the Black Sash Trust, he was attempting to sue bread producers in a class action on behalf of consumers in the Western Cape. The court made a ruling on how such class actions could proceed. Until then, class action law was limited in South Africa, restricting the tool to a narrow category of law.

Throughout our conversation, Abrahams often mentioned “principle politics”, which defines his sense of justice, values and career focus. He’s an expert on how South Africa’s transition to democracy let corporates who were explicitly or implicitly supporting the apartheid regime avoid accountability.

“If I look at South Africa’s transition there were too many gaps in our transition. It was a great experience but it wasn’t deep enough,” he said, glancing again at the Sandton skyline. “We dared not look the reality of this country in the face and say we’re going to deepen the transition. No. Some of us got too comfortable, got in bed with capital.”

As a lawyer Abrahams tries to use the tools at his disposal to confront those challenges. Two weeks ago it led to a huge victory for mineworkers. Abrahams was one of the lead attorneys as mineworkers went to the South Gauteng High Court attempting to sue 32 gold mining companies in class action cases for silicosis and tuberculosis. Both classes, for silicosis and tuberculosis, were approved to proceed, meaning that up to an estimated 500,000 workers, former workers and dependants of those who have died can now fight for compensation from the companies where they claim to have contracted severe illnesses. Both in law and efforts to rectify past injustices, the approval of the classes was historic.

The mining companies, and other multinationals, missed their chance in 1994 to seize the moment and make a difference for economic injustice, Abrahams said. They missed the moment when Mankayi’s case won at the ConCourt. What will they do now? The class action suits could take over a decade to be finalised, but there’s a chance the mining companies may choose to make a settlement, which would see many mineworkers receive compensation for silicosis and tuberculosis while they’re still alive, unlike Mankayi.

Such victories, despite the work to be done, are rare, and Abrahams wonders about his career choice, thinking of his colleagues working for corporates rather than fighting them. “When it’s really, really tough, you sometimes wonder whether you should have made other choices. But it’s not who you are.

“There’s got to be someone there that can bat for the underdogs.” DM

Photo: Attorney Charles Abrahams, one of the lead attorneys representing mineworkers in their class action suit against gold mining companies for damages regarding silicosis and tuberculosis. (Greg Nicolson)