Op-Ed: Déjà vu for Africa – Bashir goes in and out of Uganda unscathed 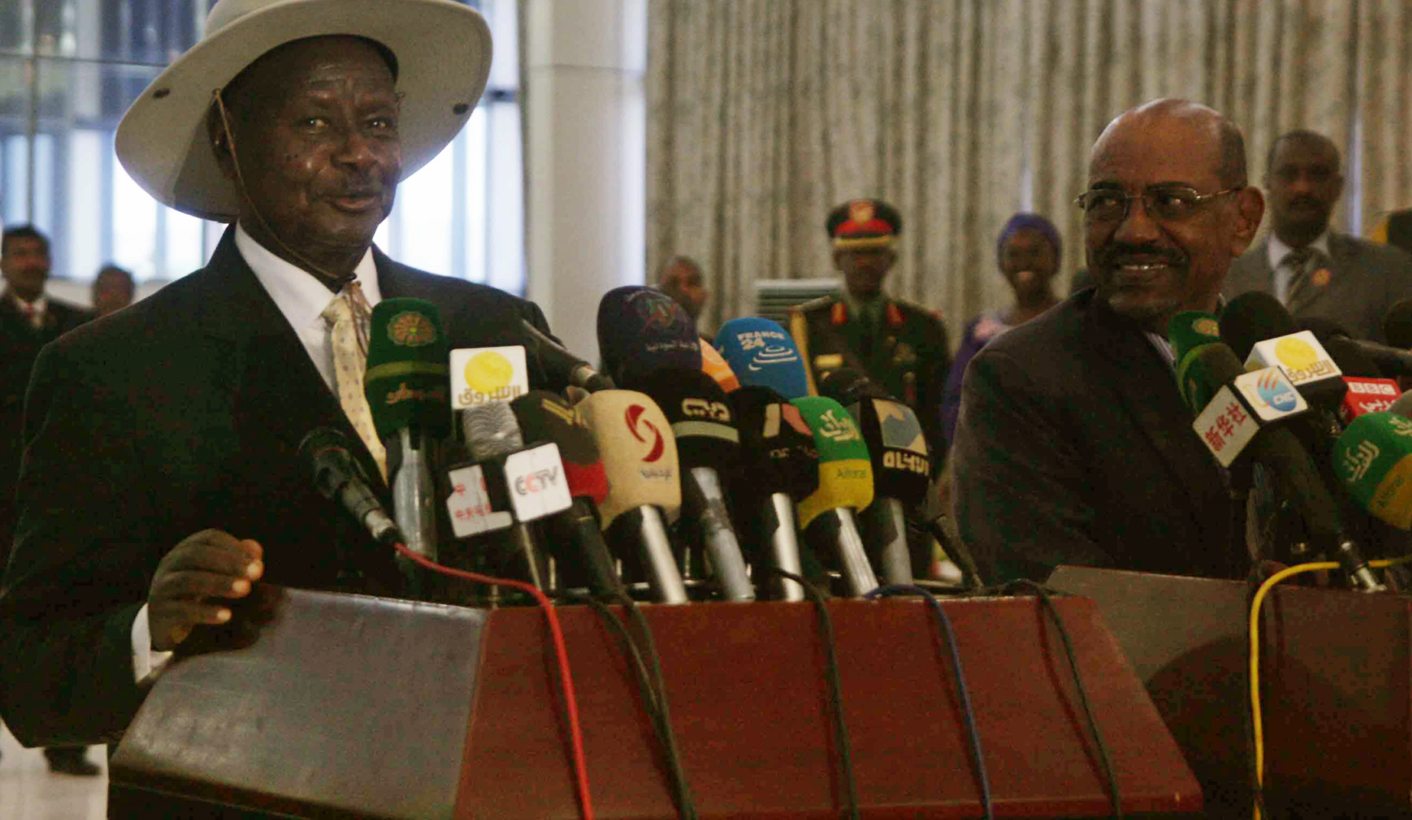 Reports have confirmed that President Bashir was welcomed in Uganda this week for President Yoweri Museveni’s swearing in ceremony as Museveni celebrates yet another term in office. By ANGELA MUDUKUTI.

Bashir’s presence in Uganda is particularly disturbing as Uganda is a signatory to the Rome Statue of the International Criminal Court (ICC), and hence the east African nation has a duty under international law to arrest Bashir. Yet no such action was taken.

Uganda signed the Rome Statute in 17 March 1999 and deposited its instrument of ratification in June 2002. The ICC’s very first cases were as a result of Uganda referring itself to the court and so it is quite ironic that now they welcome a suspected perpetrator of egregious crimes.

Though ironic, it is not entirely surprising as Uganda’s anti-ICC rhetoric has increased significantly since the indictment of President Bashir in 2009.

In 2004 Museveni saw fit to refer a situation with the Lord’s Resistance Army (LRA) to the ICC, having conceded that he was unable to adequately address the issue. The ICC investigations in Uganda have focused on the alleged war crimes and crimes against humanity committed during the armed conflict predominantly fought between the LRA and the Ugandan national forces.

The ICC issued warrants of arrest for LRA leader Joseph Kony and Vincent Otti, who remain at large.

However, the third suspect, Dominic Ongwen, surrendered himself to the court in January 2015. They stand accused of murder, pillage, rape, and forced enlistment of children, to name but a few of the horrors that ordinary Ugandan civilians have endured.

Bashir has been the subject of court cases in Nigeria, Kenya and most recently in South Africa. His resolve to remain an outlaw has put his fellow African leaders in a precarious position given the commitments they made to fight impunity and pursue accountability.

The most unfortunate part of this state of affairs is that atrocities continue in Sudan under Bashir’s watch and victims who have lost loved ones, been displaced, and suffered cruel and inhumane treatment, have no recourse to justice.

Bashir not only refuses to acknowledge the legitimacy of the ICC but those who defend him (the African Union, the South African government and Uganda to name but a few) continue to assert that incumbent heads of state should not be subjected to the jurisdiction of the ICC and that they are entitled to immunity.

This suggestion shows very little regard for justice and human rights and continues to perpetuate the culture of impunity. It is (more often than not) heads of state and senior government officials who commit the crimes that fall within the jurisdiction of the ICC; thus, to suggest that they be shielded from the long arm of the law is untenable.

Bashir could have appeared before the court, as President Kenyatta did during the subsistence of his trial. Kenyatta, as a sitting head of state, continued with the duties of his office while facing the charges brought against him by the ICC. Kenyatta’s case subsequently fell apart due to unfortunate witness tampering but the salient point is that he has displayed that it is indeed possible for sitting heads of state to co-operate with the ICC.

One must also bear in mind that the ICC is a court of law, where evidence-based decisions are made. President Bashir, like anyone else, would have a fair and impartial trial.

The ICC has recently shown in the case against President Kenyatta and Deputy President Ruto that they will not continue with matters if the necessary evidence does not exist. In Kenyatta’s case the prosecutor herself withdrew the charges after losing key witnesses who had reportedly been intimidated. In the case of Ruto, the judges of the ICC vacated charges on the basis that there was insufficient evidence and therefore no case for Ruto to answer to.

While this was a devastating outcome for the victims, it displayed that the ICC will strictly follow the evidence and will not proceed in situations where it no longer exists.

President Bashir does his African peers a great disservice by visiting signatory states and continuing to make his inability to face justice a continental problem.

Any nation that welcomes Bashir shows nothing but blatant disregard for innocent victims of Darfur and those who have witnessed unspeakable atrocities at the hands of the Sudanese government. DM