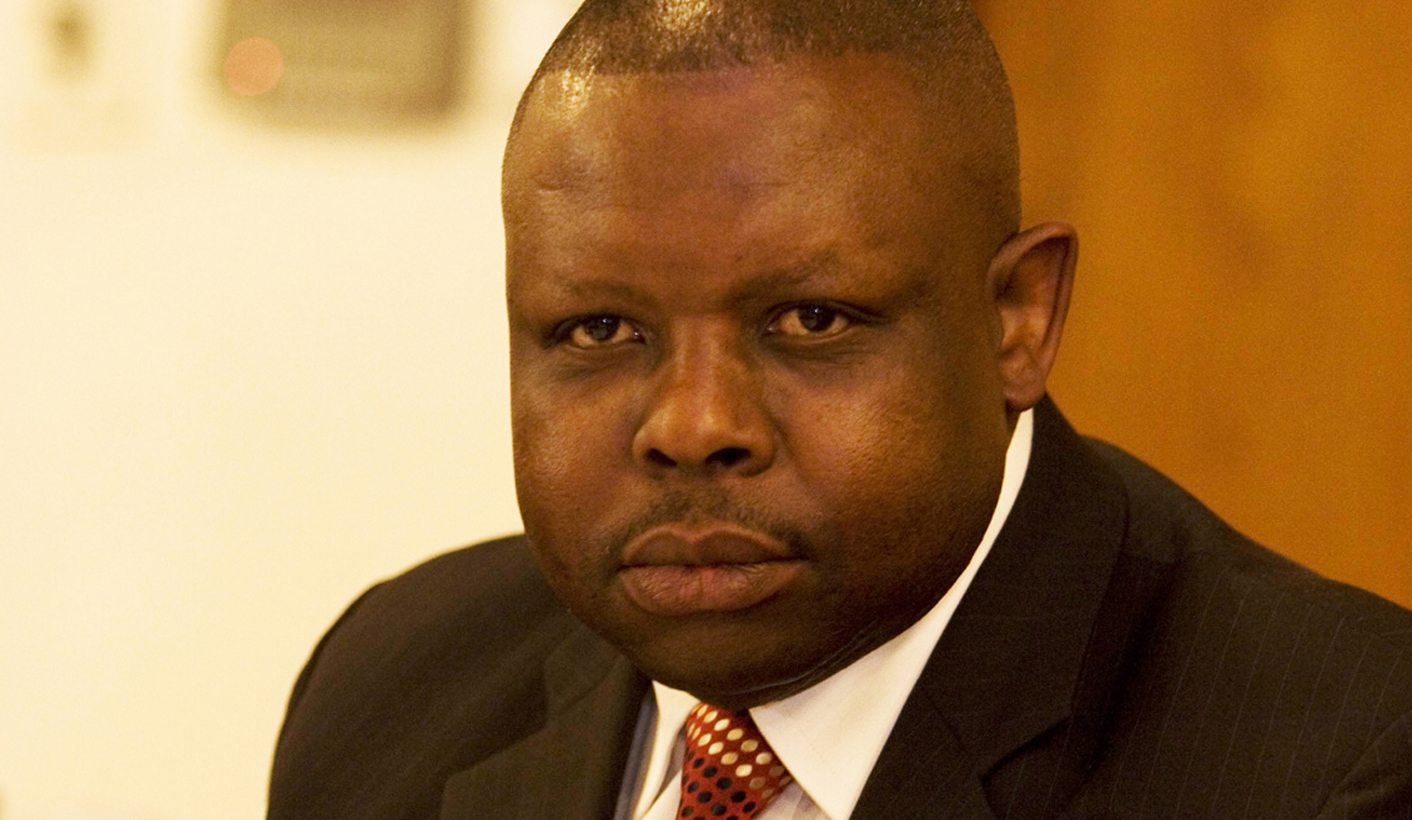 While two of the three pillars of the South African state – the executive and the legislative – have according to the Constitutional Court finding on Nkandla been found wanting, the third and vital pillar, the judiciary, has also been under threat. In March the Supreme Court of Appeal ruled that a Judicial Conduct Tribunal should continue its probe into charges of misconduct against Western Cape Judge President John Hlophe, accused of trying to influence two ConCourt judges in 2008 in cases relating to corruption charges against Jacob Zuma. On Monday the ConCourt dismissed an appeal by the two judges and ordered that the investigation proceed. By MARIANNE THAMM.

Since 2008 when 11 judges of the Constitutional Court first lodged a complaint with the Judicial Services Commission that Western Cape Judge President John Hlophe had approached two of their members and tried to influence them with regard to legal matters involving Jacob Zuma, at least 10 judges of other courts have ruled that the matter should be heard by a Judicial Conduct Tribunal.

On Monday the ConCourt finally set the matter to rest, dismissing an appeal by Judges Chris Jafta and Bess Nkabinde that the Supreme Court of Appeal had treated their case unfairly in March this year and that the matter should be heard by their own court. In the order the ConCourt said it was “incapacitated” from hearing the case because of “conflicts disabling its members from sitting” and ordered that the Hlophe case be heard by the tribunal.

The breakthrough ruling now unblocks a systemic problem that has seen delays in the work of the Judicial Conduct Tribunal and the Judicial Services Commission with regard to holding the country’s judges accountable. The situation has threatened the independence and reputation of the country’s judiciary as well as forcing Judge Hlophe himself to live under a constant cloud of controversy and suspicion.

Now not only will Judge Hlophe face an investigation into charges of misconduct and the tribunal recommend whether he be impeached or not, but at least four other judges, including Judge Mabel Jansen, will also be swiftly hauled into the public spotlight.

For almost eight years now the Hlophe matter bounced back and forth between various courts as Judges Chris Jafta and Bess Nkabinde (who were approached by Hlophe in 2008 in an attempt to influence a pending Constitutional Court judgment relating to Jacob Zuma and Thint as well as the lawfulness of search and seizures of Zuma’s home in relation to corruption associated with the Arms Deal) challenged various legal processes and procedures.

Alison Tilley, of the Judges Matter coalition, said the Constitutional Court ruling unlocked a mechanism to hold the country’s judges to account and was a hugely important order.

In April this year Justices Jafta and Nkabinde appealed a March 2016 Supreme Court of Appeal judgement by Judge Mahomed Navsa ordering that a Judicial Conduct Tribunal hear the case. Judges Nkabinde and Jafta approached their own court saying that the SCA had treated their case unfairly and that the matter should be heard by the Constitutional Court.

But the legal requirement that cases before the ConCourt be heard by at least eight judges would not have been possible as at least four judges would have had to recuse themselves and the remaining six would not have formed a quorum. The Hlophe matter might then have ended up “in the vaults” of the court, inadvertently (or perhaps deliberately) letting him “off the hook”, according to one source.

On April 23, “Hlophe JP contacted Nkabinde J telephonically and requested to meet her on Friday 25 April 2008. On that day Hlophe JP visited the chambers of Nkabinde J at the Constitutional Court as agreed and without invitation, Hlophe JP initiated a conversation with Nkabinde about the Zuma/Thint cases that had been heard by the court; and in the course of that conversation, Hlophe JP sought improperly to persuade Nkabinde J to decide the Zuma/Thint cases in a manner favourable to Mr J G Zuma.”

Judge Hlophe’s approach had been disclosed “in confidence” by Judge Nkabinde to Judge Mokgoro in her chambers. She had told Judge Mokgoro that Hlophe, after asking her “which Nkabinde are you” as he had thought she was “from one of the Zulu-speaking Nkabinde families”, had informed her that “he had a mandate”.

“He then told her that the privilege issues in the Zuma/Thint cases had to be decided ‘properly’. Nkabinde J was concerned because she had been writing a post-hearing note on the aspect of privilege. Both Mokgoro J and Nkabinde J wondered how Hlophe JP had become aware of the fact that Nkabinde J had been writing on that aspect,” wrote Justice Navsa.

Hlophe had then informed Nkabinde that he “had connections with the national intelligence. He also said that some people were going to lose their positions after the elections. Hlophe JP also said that he had outgrown the Cape High Court, that he was going to make himself available for appointment at the Constitutional Court and that Jafta AJ should also make himself available for appointment to the Constitutional Court.”

Judge Mokgoro had then suggested to Judge Nkabinde that she report the matter to Chief Justice Langa and Deputy Chief Justice Dikgang Moseneke.

In the March hearing Judge Navsa said it was important to repeat that Judge Nkabinde had “repeatedly expressed an unwillingness to furnish an individual statement regarding the matter” and that both judges Hlophe had approached “made it clear that in their view the approach by Hlophe JP had been improper, explained that they insisted that as far as they were concerned they had dealt with the matter by rejecting the approach and did not consider it necessary to lodge a complaint or make a statement”.

At a later meeting attended by Justices Langa, Moseneke, O’Regan, Jafta, Kroon, Madala, Mokgoro, Skweyiya, Van der Westhuizen and Yacoob, the justices “took the view that the conduct of Hlophe JP, as reported to them, ‘constituted a serious attempt to influence the decision of the Court in the Zuma/Thint cases’ and that it was decided unanimously by all judges present that the appropriate course of action, given the gravity of the matter, was to lay a complaint with the JSC against Hlophe JP”.

“In reaching this decision, it was specifically stated that the judges who had been approached by Hlophe JP, if Hlophe JP resisted the complaint, would have to give oral evidence to the JSC in due course,” said Judge Navsa.

A Judicial Conduct Tribunal had been set up to investigate the complaint in 2013 but Judges Jafta and Nkabinde had challenged its lawfulness. That case was dismissed by the tribunal, the High Court and the Supreme Court of Appeal before they took it to the Constitutional Court.

The two most important or strategic courts in the country are the North Gauteng High Court where all challenges to executive decisions are launched and the Western Cape High Court which is the starting point for all challenges to legislation. It is imperative that these courts (as well as all others) assert their independence and are headed by Chief Justices with impeccable reputations.

Until the Constitutional Court ruling on Monday questions were being asked as to why, when there was an apparent prima facie case against Judge Hlophe and the two judges had given evidence under oath, they appeared to be obstructing and delaying the process.

The Judicial Services Commission is the only body that can ultimately recommend the impeachment of a sitting judge. However, the balance of power in the JSC is held by four presidential appointments, and if the tribunal should recommend impeachment this must be put to a vote in the National Assembly where only a two-thirds majority would/could result in Judge Hlophe being the first judge in South African history ever to be impeached. DM