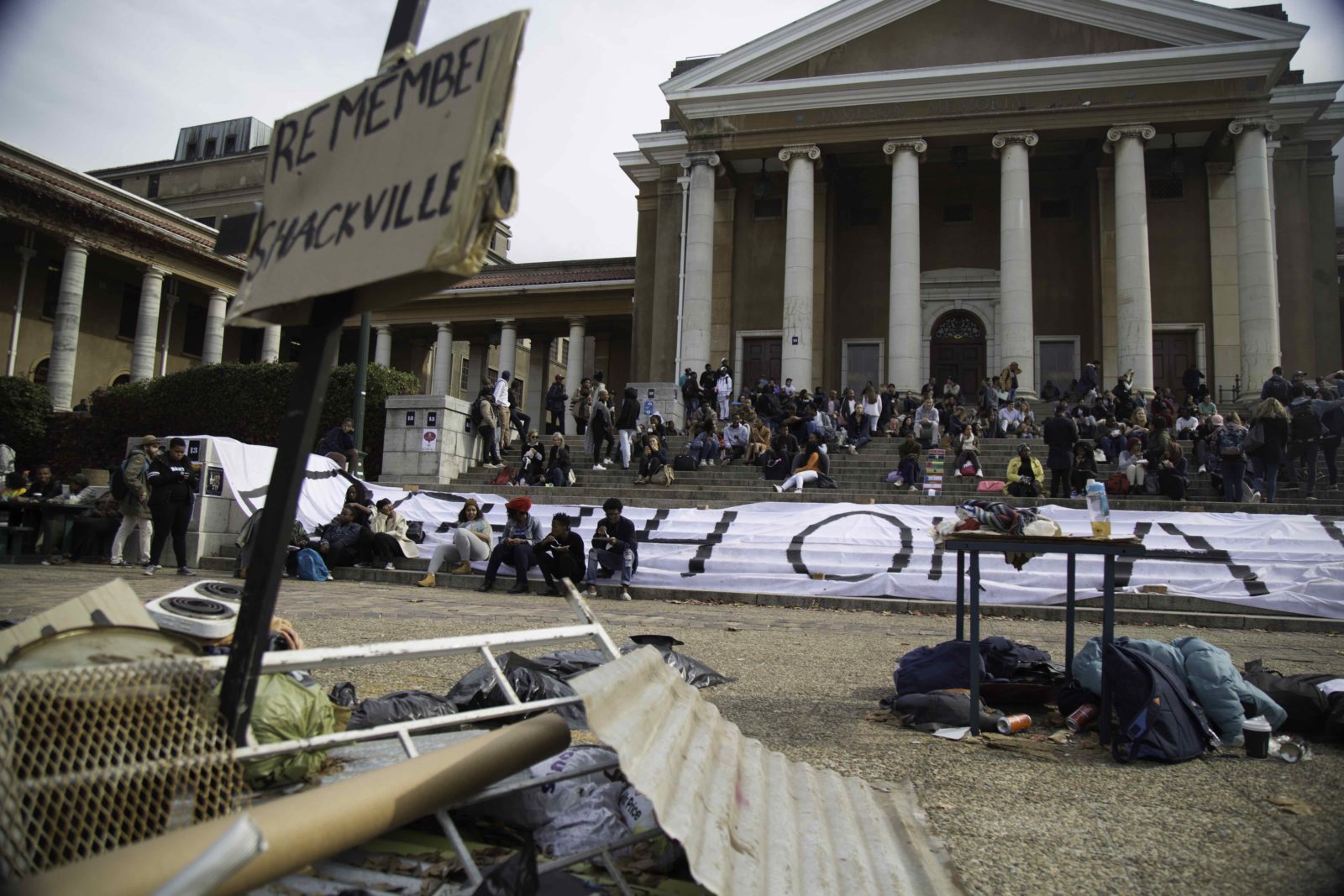 The atmosphere at UCT on Thursday was sombre as students gathered to remember the Shackville protests and to stand in solidarity with the students indicted in yesterday’s court judgment. With five students indicted, and protesters ordered to pay the university’s legal costs, the gathering was noticeably demoralised. The purpose of the #DeathofDreams protest on Thursday was voice solidarity with absent peers – and to remobilise. By ANDREA TEAGLE and SUMEYA GASA for DAILY MAVERICK CHRONICLE.

The mood at the Rhodes Must Fall protest at the University of Cape Town (UCT) yesterday reflected the message conveyed by the installation set up in front of the Jammie stairs. Lying at the foot of two mounds – or koppies – of household objects and sheets of corrugated iron was a row of body bags. One of the piles was marked “Shackville”, the other, “Marikana”. On top of the “bodies” rested graduation hats.

“Body bags symbolise the social death of people who came to university, and now they’re expelled,” explained Dorfling Mahlabela, a 21-year-old student excluded for outstanding fees. Holding a cardboard placard reading “Expelled”, she said she did not think she would have the financial means to return to UCT next year.

Behind her, a big white banner stretched across the Jammie stairs. At first, despite its prominence, it was difficult to read – aptly perhaps, for the protesters contend that the public is unaware of what is happening. Then, students pulled it up off the ground: in large letters was written, “Death of a Dream”.

The RMF movement has been championing access to education and transformation on campus since March last year. Thursday’s #DeathofDreams protest comes after a court judgment indicted five students on various charges. The university sought legal action against 16 respondents after February’s “Shackville” protest ended in violence.

In her judgment, Judge Allie ruled that the five be precluded from setting foot on UCT property for an indefinite period of time without express permission from Chancellor Max Price. The protesters were also ordered to cover UCT’s legal fees, reportedly amounting to upwards of R250,000.

“UCT is winning,” Mahlabela said, gesturing to the turnout. “They’ve exhausted us with the legal costs. People are scared to protest. No one wants to come out, because literally, it could be you [who could be arrested].

Fellow protester and final-year law student, Luthando Vilakazi, agreed. “[The movement has been] demobilised, since the university exercised its repression and its power against us… Essentially, the university is extending its long arm of repression against students who are powerless.”

Vilakazi says that it’s a misperception that particular individuals have spearheaded the Rhodes Must Fall movement. RMF’s members contend that decisions are taken collectively, and in some cases spontaneously, and that it seeks to represent the most vulnerable students.

“More than anything, the university is just trying to make out that these students are like these masterminds, when that’s not necessarily the case,” Vilakazi says.

She and others stated that they did not have a plan for the future; rather, Thursday’s events were meant as a recognition of what their fellow students were facing, and a means of remobilising among themselves.

Around midday, a small number of students gathered to dance and sing around the Shackeville koppie. As the afternoon wore on, there was an announcement that RMF members would meet later in the evening. The mood remained subdued as the students dispersed.

The decision of UCT to take particular students to court has been viewed by some as a deliberate attempt to silence black students.

The university expressly rejected the allegation, saying that it had no factual basis. In a written statement to Daily Maverick Chronicle, UCT’s Communication and Marketing Department stated, “We took this step out of concern for the safety of staff and students, as well as the security of campus property,” adding, “As an institution we encourage students and staff members to initiate legal protest action and they have done so on numerous occasions.”

In its statement, UCT said that the Vice-Chancellor “also has a responsibility to other university stakeholders and his schedule needs to accommodate a wide range of meetings and appointments”, adding that the students had rejected the approach of other members of the UCT executive.

Thursday’s protest drew to a close in the early afternoon. Just as one member began to clear away the installation, another stood to announce that an RMF meeting would take place that evening. Tired they may be, but the RMF protesters are not taking the effective expulsion of their peers lying down. DM