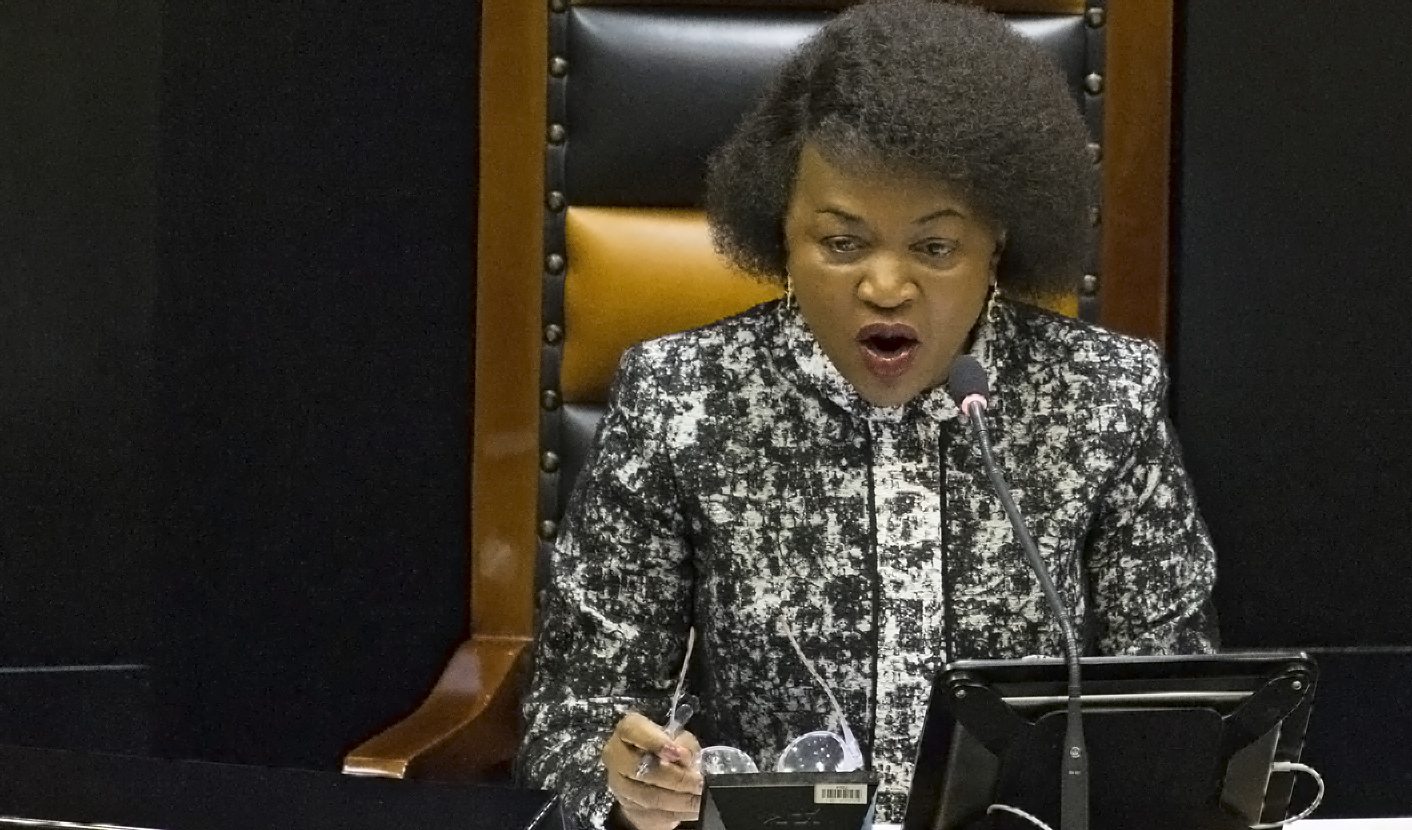 Secretary to Parliament Gengezi Mgidlana found himself uncomfortably in the EFF’s and DA’s crosshairs during Thursday’s Parliament budget vote. Both criticised last year’s overseas trips to three legislatures and slammed the state of labour relations, and the DA called for a probe into a R71,000 ex gratia payment to him just a few months into the job. At the end of a four-hour debate, Speaker Baleka Mbete came out to bat for her top administrator, saying there was “nothing untoward” about the overseas trips and it was unfair for MPs to use their speaking time to criticise him. By MARIANNE MERTEN.

Gengezi Mgidlana sat in the National Assembly as a guest to the debate as Economic Freedom Fighters MP Thembinkosi Rawula said he was “wasting money” on luxury overseas trips, while Parliament’s affairs were not in order.

“It is an embarrassment this important institution communicates with its workers through the CCMA (Commission for Conciliation, Mediation and Arbitration),” said Rawula, calling for Mgidlana to go.

ANC deputy chief whip Doris Dlakude intervened, saying the EFF MP did not have all the information, and the ANC’s next speaker, Richard Mdakane, spoke in defence of Mgidlana. It was wrong to criticise the Secretary to Parliament, Mdakane said: “He can’t answer for himself. If you attack him… it is unfair. It is one of the worst things you can do.”

But DA deputy chief whip Mike Waters again raised Mgidlana’s overseas trips, plus his use of blue light transport, and Parliament’s fraught labour relations. In addition, he called for an investigation into the R71,000 ex gratia payment, which may have violated financial prescripts. “The Secretary to Parliament is out of control. He must be investigated and, if it is found that he has flouted any laws or policies, be fired,” Waters said.

Closing the debate, Mbete picked up where Mdakane had left off. “It is very regrettable that Honourable Members stand on this podium… to attack a member of staff they themselves have appointed,” she said, adding that such matters should be taken to the correct structures in Parliament. Mgidlana’s visits to overseas parliaments were “according to policy” and approved by the presiding officers, Mbete said: “There is nothing untoward about that tour.”

The public defence of the Secretary to Parliament, and the national legislature’s budget debate itself, have come amid ongoing labour disputes with the National Education, Health and Allied Workers’ Union (Nehawu), which represents 981 of 1,389 parliamentary workers. The disputes affect 571 workers and date back to the union’s unprotected strike in late 2015 over performance bonuses and conditions of employment.

On Tuesday, Parliament’s administration unsuccessfully asked the CCMA to join various union grievances. Given the time spent on these arguments, Daily Maverick was told by a Nehawu official, a new date had to be set for mediating its objection to the administration’s unilateral remarking down of performance assessments, the basis for performance bonuses. Parliament last week asserted its right to moderate the performance scores, a move the union has rejected.

Next week the CCMA is scheduled to deal with disputes around D-band employees, who Parliament asserts are all managers. However, this category of employees includes committee support staff such as content advisers, as well as legal advisers and procedural staff, who report to unit and section heads who are classified as managers.

In addition, the Nehawu official said there has yet to be any movement on issues such as pensions and group life cover, which according to the union/Parliament agreement in March 2015 should have been subject to review and renegotiation.

The terse labour relations also feature in Parliament’s performance report for the fourth quarter of the 2015/16 financial year (effectively the first three months of 2016) tabled by Mbete earlier this week. Under the heading “employee relations incidents” it notes that disputes increased to 18 in the 2015/6 financial year, up from five the previous year, and disciplinary proceedings more than tripled over the same period to 11 from three.

“Based on the number of external disputes lodged … there seems to be a lack of trust in internal processes for dispute resolution where parties are not willing to reach a compromise on their mandated position,” the 21-page says. “The employees relations trend indicates a climate of strained employer/employee relations dominated by aggrieved employees who constantly refer their matters for external dispute resolution processes. These include the Commission for Conciliation, Mediation and Arbitration (CCMA) and Labour Court.”

However, the report shows the office of the Secretary to Parliament leading the performance stakes with 80% of targets fully met, followed by support services (66.67%) and core business trailing at half of targets met.
Yet on Parliament’s performance plans, Mbete bluntly said the institution would not be able to fully implement its performance plans as it received R956-million less than requested. Parliament received R2.189-billion for the current financial year.

While Mbete indicated discussions would in “due course” start on Zuma’s request to consider the maintenance of two capitals in February’s State of the Nation Address (SONA), “We cannot continue as if the challenges we face in this regard are not substantive and real,” she said. It was left to ANC MP Vincent Smith to flesh this out further.

“The current arrangement of locating the executive arm (of the state) more than 1,000km away from the legislative or oversight arm can no longer be justified politically. It can no longer be justified financially,” said the recently elected co-chairperson of the joint committee on the Financial Management of Parliament. “It is our view that the sooner we finalise the issue of relocating Parliament the better.”

Thursday’s debate, held separately but concurrently in the National Assembly and the National Council of Provinces (NCOP), raised some of the difficult terrain Parliament has traversed over the past year. This included the Constitutional Court judgment on Nkandla, which found the National Assembly had acted “unlawfully” and “inconsistent with the Constitution”. It also included references to riot police firing stun grenades at student and worker protesters, the forcible eviction of MPs by the parliamentary protection services, failure to hold the executive to account and the lack of decorum in the House.

Mbete said the presiding officers shared President Jacob Zuma’s concerns about decorum – the president said he faced embarrassing questions on his trips on the continent and elsewhere when he replied to last week’s presidency budget debate – and she spoke of “further engagements” with political party leaders.

But she also urged all MPs to reflect on how best to return to a “convivial, co-operative atmosphere”, indicating that cameras triggered out-of-order behaviour. “It is only when the eyes of the television cameras are trained on Honourable Members that the sugar rush tends to kick in and members disobey the chair.”

After a four-hour debate, concrete solutions for the self-proclaimed People’s Parliament remained few and far in between. DM