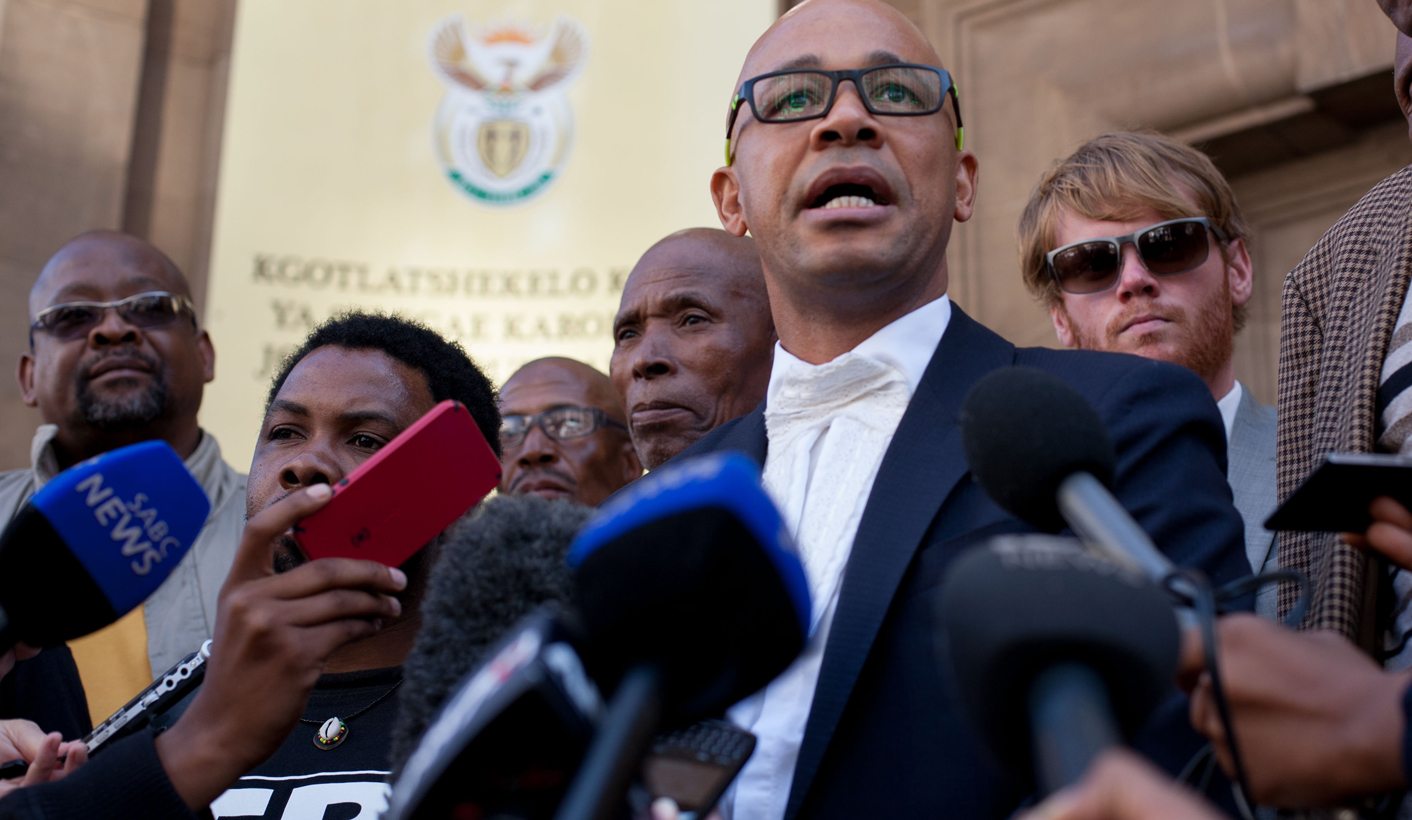 On Friday, mineworkers and their dependants were approved to proceed in a class action case against gold producers for silicosis and tuberculosis. It will be the largest class action case the country has seen and workers and supporters had a rare chance to celebrate. The victory may be historic, but their fight far from over. By GREG NICOLSON.

Outside the South Gauteng Court on Friday, attorney Charles Abrahams remembered standing on the same steps 10 years ago. “When we started that case we started in this very court,” he recalled, having represented Thembekile Mankayi’s silicosis claim against AngloGold Ashanti. It was a test case that could determine the future of such claims. They lost. It felt lonely, terrible, said Abrahams.

“I flew up this morning to note the judgment and it was a very different situation. It was a euphoric judgment,” said the attorney who has worked on class action claims against apartheid companies and the colluding bread producers.

After years in court, fighting up until the Constitutional Court which finally found in favour of Mankanyi and set a precedent for future claims, lawyers and mineworkers demanding compensation from gold companies for contracting occupational lung diseases at work achieved a resounding victory in Johannesburg on Friday. Two classes for suits against 32 mining companies were certified to proceed with court action. Mineworkers or dependants of deceased mineworkers are now able to proceed with their mass claims for both silicosis and tuberculosis (TB).

“This is an extremely historic day. It’s a day for gold mining workers, gold mining workers on whose back this country was built for generations. Gold mining workers have languished in mines and their plight has never been recognised, until today,” said Abrahams on the court steps. The mineworkers were represented by Abrahams Kiewitz Attorneys, Richard Spoor Attorneys, and the Legal Resources Centre. “It’s a major victory,” he added, saying it shows the judiciary is serious about constitutional democracy and upholding the rights of the most vulnerable.

“They basically ruled in our favour on everything,” said Section27’s John Stephens. Section27 represented the Treatment Action Campaign (TAC) and Sonke Gender Justice, which were admitted as amici curiae to the case.

The judgment delivered by a full bench of the court and delivered by Gauteng Deputy Judge President Phienas Mojapelo found resoundingly in favour of the 69 mineworker applicants and the thousands they represent. “The only way justice can prevail in the cases of individual mineworkers or their descendants is if they are afforded an opportunity to pursue their claims by at least having significant parts of it determined through a class action,” read the judgment. “Accordingly, we reject the submissions of the mining companies that the class action is untenable and unmanageable and hold to the contrary.” It is “unfortunate”, the judgment said, that mining companies have chosen to ignore claims they have tried to obstruct the course of justice.

The court certified the two classes, those of both workers and their dependants who have suffered from work-related silicosis and TB. The certification of the TB class was more uncertain than the silicosis class and represents a huge victory for the mineworkers, with many more workers having contracted TB in the mines than silicosis. Another win was the court’s decisions to allow dependants of deceased workers to make claims for damages, setting a new precedent in South Africa.

An important model was established for large class action cases, said Section27 attorney Umunyana Rugege. She explained that the law previously only allowed dependants of the deceased to claim for damages if the court process had already begun at the time of that person’s death. On Friday, the court said relatives of workers who have already died can still join the class suit to claim compensation. “What it said is [the law as it was] essentially benefits mining companies and prejudices poor and common people,” added Rugege, noting that this showed the court took seriously its role in developing new laws.

TAC general secretary Anele Yawa called the case a David and Goliath battle. “Our sling and our stone is the Constitution of the country. No one is above the Constitution,” he said, slamming the mining industry’s history in South Africa. TAC and Sonke supporters gathered outside the court and celebrated after the judgment.

Mining companies opposed the certification of the class action. The occupational lung disease working group, representing African Rainbow Minerals, Anglo American, AngloGold Ashanti, Anglo American, Gold Fields, Harmony, and Sibanye Gold, on Friday said it is still studying the judgment and each company is deciding whether to appeal. “Either way, it should be noted that the finding does not represent a view on the merits of the cases brought by claimants,” the group said in a statement.

“The companies remain of the view that there are issues related to compensation and medical care for occupational lung disease that need to be addressed through engagement between stakeholders, with a view to designing and implementing a comprehensive solution that is both fair to past, present and future gold mining employees, and also sustainable for the sector. They therefore remain committed to achieving these goals.”

After the judgment, former mineworker Vuyani Dwadube stood outside the court and raised his fist. “The judgment gives us the right to stand up in my court to demand our rights,” the 74-year-old said through a translator. He said he was dismissed after working for 16 years at Harmony in Welkom after contracting TB and said the R19,000 he received in compensation was not enough. While the state offers compensation for workers who contract occupational lung diseases, the system suffers from huge backlogs and the compensation has been criticised as insufficient.

Photo: Vuyani Dwadube, a 74-year-old former Harmony employee, raises his fist outside the South Gauteng Court after a class action for miners suffering from silicosis and tuberculosis was given approval to proceed. (Greg Nicolson)

“We’ve been suffering for a long time,” said Dwadube, who was screened for silicosis but never got the results. “I’m happy, even though it may take a while, that my child may be able to access the money even if I’m not around.” Now, he said, he and other miners will spread word about joining the class action.

Going forward, the court ordered notices must be published in newspapers, on radio, in legal office noticeboards, at the Employment Bureau of Southern Africa, at mines and on mining companies’ websites telling relevant current and former mineworkers, and their dependants, they can be part of the class action case. When the class action case comes to court, the classes will plead their common issues, before discussing individual claims and different mining companies’ liability and arguing for compensation.

The court process could take as long as 10 or 15 years, but the largest mining companies involved have suggested they might be willing to discuss a settlement. Mineworkers would likely welcome a settlement agreement, given the potential length of the court case and the likelihood that a number of claimants could in the meantime pass away. But settlement discussions would have to be genuine and an agreement would now have to be made an order of the court, said Abrahams.

For the mineworkers, their lawyers and the civil society organisations supporting them, Friday was a rare day of celebration. They are trying to do what has never been done and their opponents have deep pockets for legal teams who can frustrate their efforts.

It might take 10 or 15 years, but remembering back to when he travelled to the Eastern Cape over 10 years ago to find the first silicosis claimant, Abrahams said his team and the network supporting the class action suit is ready. “We understand that these cases take a long time. These are not the kind of cases you take on today and expect results tomorrow.” DM