Future’s so bright, we gotta wear shades: Outages may be a thing of the past, says Eskom’s Brian Molefe 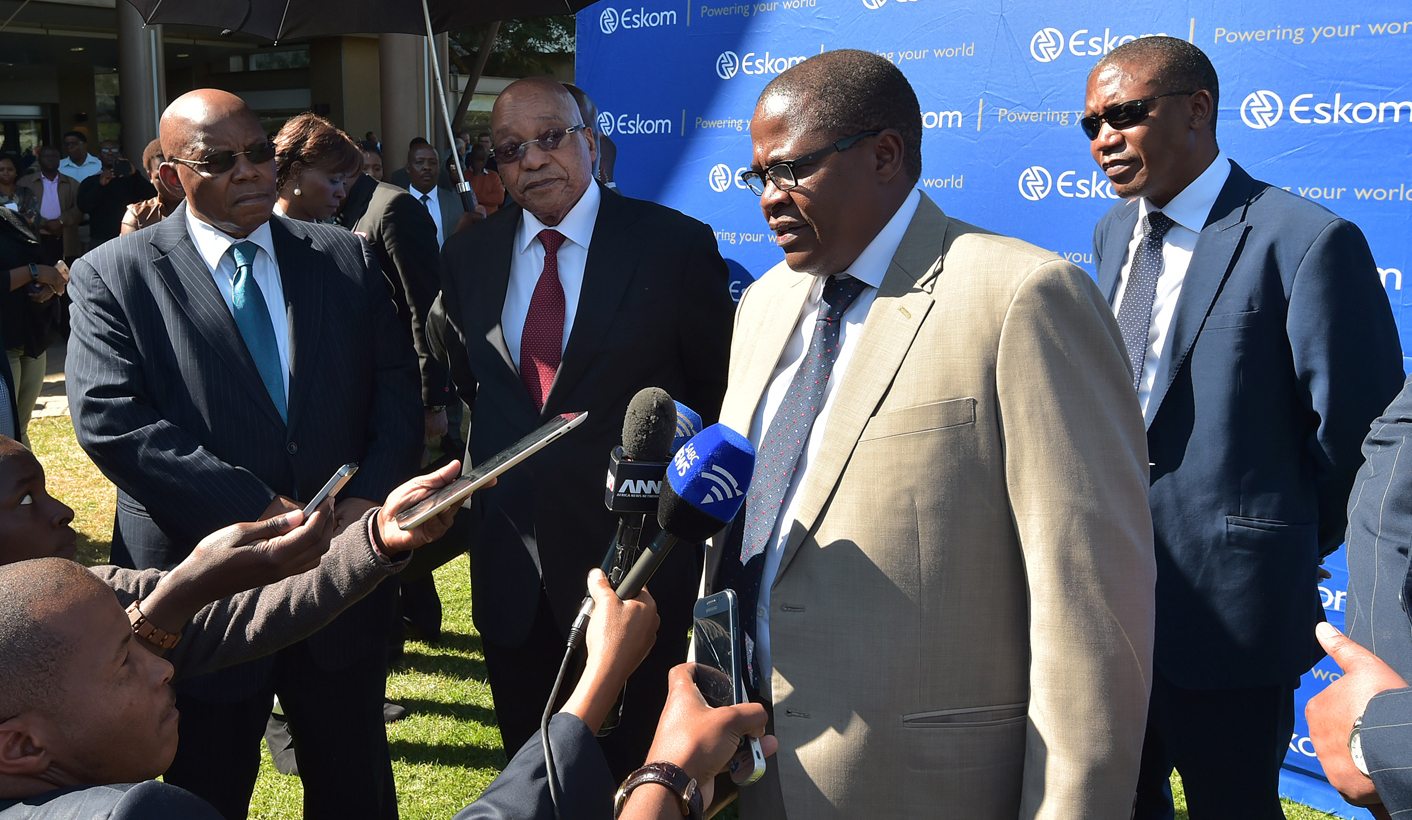 Eskom is confident the lights will stay on. Since a two-hour and 20-minute outage in August 2015, the power utility’s Chief Executive Brian Molefe on Thursday emphasised, there has been no load shedding for nine months – and he wants to keep it that way. “We have regained control of the system,” he said at a briefing in Parliament. “We have a plan and I don’t think this plan will fail.” But the politics of energy were not far from the surface as the Eskom chief’s views on renewable power stand in stark contrast to what Energy Minister Tina Joemat-Pettersson told Parliament a day earlier. By MARIANNE MERTEN.

The detailed-packed Eskom good news presentation was preceded by a media briefing on this week’s Cabinet meeting which included discussions of a national spelling bee and of celebrations of special days such as International Day for Families on 15 May.

It also emerged that President Jacob Zuma congratulated his ministers on their budget speeches, which “(demonstrate) that South Africa is a nation at work”. Cabinet reiterated Zuma’s condemnation of the burning of schools in Vuwani, Limpopo, he had made in last week’s reply to the presidency budget debate, and condemned racism, including the comments by Judge Mabel Jansen.

Cabinet said the unemployment statistics were a “concern”, but that there are plans in place. And emphasised that the recent court ruling overturning the dropping of 783 criminal charges in April 2009 did not imply any guilt on the president’s part. Not discussed was the troika of ministers’ interaction with the financial institutions that closed Gupta businesses accounts; the ministerial report had not yet been submitted.

In comparison, Molefe’s briefing was information-laden. It emerged that at 02:00 South Africans use about 22,000 MegaWatt (MW) of electricity, that consumption plateaus at about 28,000MW before rising around 18:00 at 34,000MW. So, to get ready in time for the p.m. peak, Eskom has excess capacity during the day, which it sells to neighbouring countries. As of noon on Thursday, Molefe said, Eskom had made R3-million from that day’s sales.

And there have been cost savings on the diesel front. With power generation up and running more efficiently than in several years, the need to bring online diesel generators has been reduced – and that’s brought down diesel expenses to less than R25-million in April 2016, from R854-million in August 2015.

How has all this been possible? A balance of upping scheduled maintenance to avoid unplanned breakdowns and bringing new capacity totalling 3,279MW online ahead of deadlines, according to Molefe, who reminded everyone of what he said shortly after taking the reigns last year: if 3,000MW was found, load shedding would end. Last September, Molefe hauled out the Tetris analogy: balancing demand and supply at any given time was like slotting blocks effectively into place in the Russian-designed 1980s computer game.

Of course, Eskom’s balance sheet also got a boost after the government last year sold its Vodacom shares to raise R23-billion in a special appropriation for the state-owned power utility.

But politicking bubbled just under the surface, least of which were gripes about the electricity regulator disallowing Eskom to off set diesel costs in its tariffs. Eskom would continue to use diesel-fuelled generators, said Molefe: “The cost of using diesel is less than the cost to the economy of load shedding”.

The politics of energy emerged more strongly over renewable energy. The Eskom boss, who accounts to public enterprises, appeared rather ambivalent about renewable power. On Wednesday Joemat-Pettersson emphasised renewable energy’s importance in her budget debate. And from the two presentations it seems the two use different sets of numbers.

Molefe on Thursday said renewable energy, like solar and wind, was limited – only about 1,300MW of a total capacity of 2,310MW was available at any given time – and availability was at the wrong time, usually “between 9am to 3pm or 4pm, which is not what we need”. On an overcast day like Thursday in Cape Town, solar power was not at ultimate levels and wind appeared to be most available at night and early morning “when we don’t need it”, according to Molefe.

Joemat-Pettersson, however, touted renewable energy as “contributing an increasing percentage of the buffer between the available supply and projected demand for electricity”.

“Already a 16% contribution is made to the total energy produced during the morning and evening system peak periods in a 24-hour period,” said the minister, adding that the country was on track to meet the renewable energy contribution of 17,800MW by 2030.

“As at December 2015, the department (of energy) had procured 6,377MW of renewable energy and has already connected 44 projects with a capacity of 2,021MW to the national grid, with many more under construction,” Joemat-Pettersson told MPs.

Regardless of the politicking over renewable energy, never mind independent power producers or even nuclear power, there’s big bucks involved. And it has been the South African consumers who over several years now also had to pay for electricity tariff hikes well over inflation. DM