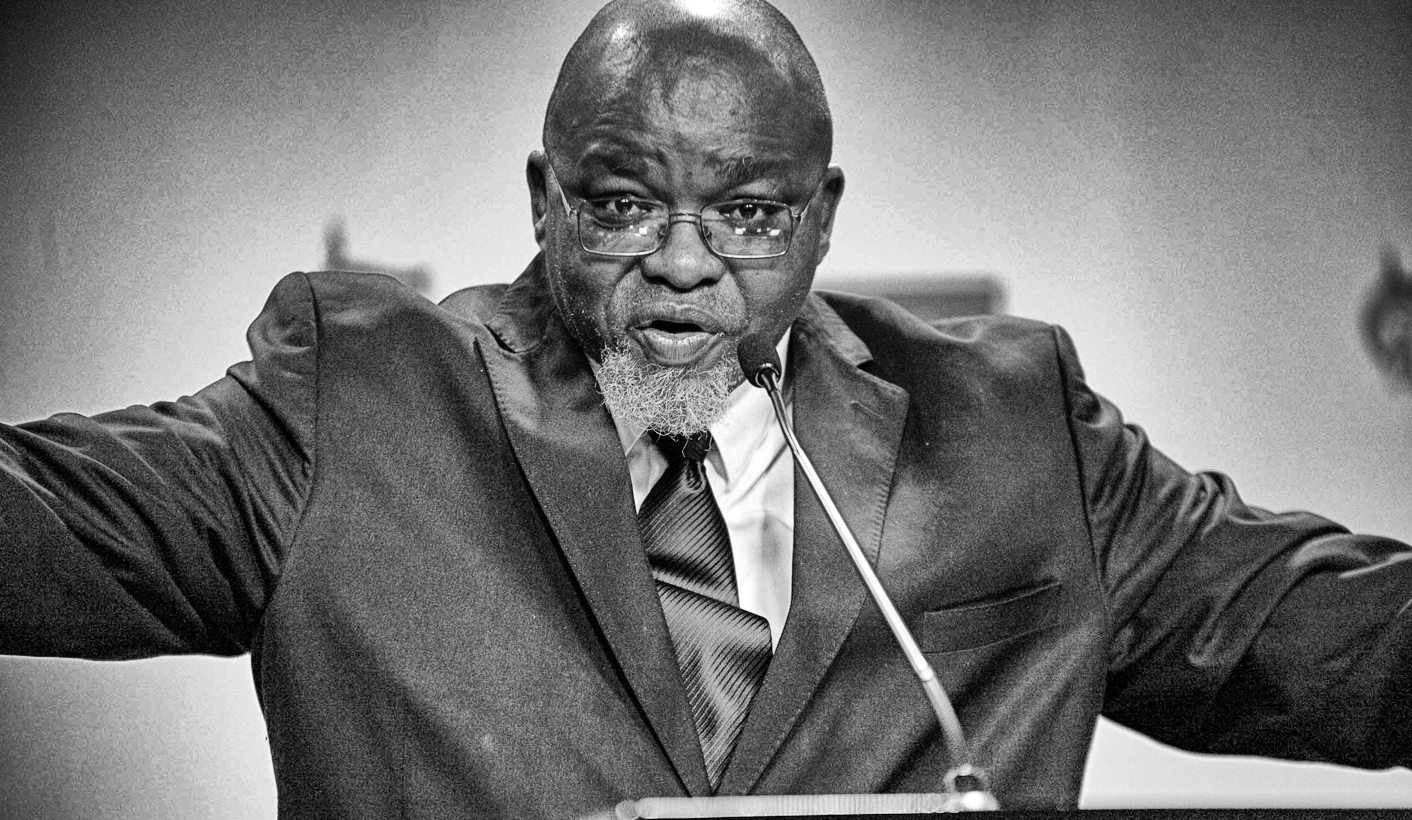 If people like ANC Secretary-General Gwede Mantashe, State Security Minister David Mahlobo and Deputy Defence Minister Kebby Maphatsoe are to be believed, South Africa’s misfortune is being plotted in faraway capitals and being executed here by citizens who are highly paid agents. It seems to be a preferable story to tell rather than to accept that South Africa is caught in a vortex of really bad political leadership that is continuously triggering social and economic turbulence. But why tell the truth and let Hollywood have all the fun producing make-believe political thrillers? By RANJENI MUNUSAMY.

In a highly charged election season, one would think that the secretary-general of the ruling party would have his mind on wooing voters and keeping the ANC from devouring itself. In an interview with reporters earlier this week, Gwede Mantashe recycled the allegation that Western powers were driving a regime change agenda in South Africa as part of a broad campaign to destabilise former liberation movements in the region.

Mantashe says there had been an unsuccessful attempt at regime change in Zimbabwe with the Movement for Democratic Change being funded first as a trade union, then as an opposition political party to remove Zanu-PF from power. He said a similar strategy was now being applied to effect regime change in South Africa under the guise of strengthening democratic institutions.

“That narrative is very prevalent in South Africa if all of a sudden democratic institutions must be protected from us by same people who were not actually part of forming us,” Mantashe said. He said the ANC’s weaknesses made it vulnerable to outside threats.

Mantashe has made allegations of Western involvement in South Africa’s domestic affairs in the past. At an anti-racism march in February, he said the ANC was aware that meetings were taking place at the United States Embassy in Pretoria to incite regime change in South Africa.

“As we mobilise our people, we must say be vigilant. You must see through anarchy and people who are out there in a programme of regime change,” Mantashe told ANC supporters. “We are aware of the meetings taking place regularly in the American embassy. These meetings in the embassy are about nothing else other than mobilisation for regime change. We are aware of a programme that takes young people to the United States for six weeks, brings them back and plants them everywhere in the campuses and everywhere.”

This was in obvious reference to the Mandela Washington Fellowship, the flagship programme of the Young African Leaders Initiative. But rather than seeing this as a programme by the US government and agencies to invest in the next generation of Africa’s leaders, Mantashe likened it to what happened in Libya and Egypt, where mass uprisings led to the overthrow of governments. It was Mantashe’s explanation of the upsurge of student activism on campuses around the country, particularly the #FeesMustFall protests.

Nobody could ever accuse Mantashe of being diplomatic or tactful, and it appears the allegations about regime change were not taken seriously in any quarter, including by the US government. US Ambassador to South Africa Patrick Gaspard appeared bemused when he responded on Twitter to Mantashe’s comments in February: “I wish that someone would invite me to these meetings. Let’s not blame others for our own challenges.”

In another tweet, Gaspard wrote: “I’m so disappointed as I always imagined that if I organised a coup it would look like Mardi Gras – food, music, dance.”

But Mantashe’s allegations were later backed up by State Security Minister David Mahlobo. “We are not an exception, we are not immune [to regime change],” Mahlobo said at a briefing at Parliament. He said changing a government by unconstitutional means took different forms and could be done by individuals using various mechanisms, such as the media. “In South Africa we are always alert. There are certain activities that we always keep an eye on,” Mahlobo was quoted by News24.

He said concerns had been raised with the US over its student exchange programme, with African leaders saying it would be better if the US interacted with the students through governments, and not directly.

In April Mahlobo again made reference to foreign interference in domestic affairs saying there were South Africans and NGOs collaborating with foreign forces to destabilise the country. He said during the State Security budget speech in Parliament that there were security agents in NGOs being used for covert operations. He said some NGOs with “funny names” had interception equipment and could not explain their funding. Mahlobo claimed these organisations were funding the student protests.

At what point will these spurious allegations really irritate the American government and impact on US-South Africa relations? For now it seems the Americans are taking a measured approach, not going out of their way to contest accusations that they have a nefarious agenda in South Africa.

In response to questions from Daily Maverick, Cindy Harvey, spokeswoman at the US Embassy in Pretoria, said South Africa was a “strategic partner and friend of the United States”.

“The United States does not regard the democratically-elected government of South Africa as a ‘regime’,” she said. “Absurd conspiracy theories and false claims that we seek to undermine South African democracy run contrary to the spirit of the proud and longstanding relationship we have shared with South Africa over the years.”

Asked whether the US government had any particular interest in this country’s affairs, Harvey said South Africa was a key international player and had “an important role to play as a mentor to nascent democracies and as a platform for entrepreneurial talent that will take root across the continent”.

On the state of US-SA relations, Harvey said the recent resolution of the trade disagreement between the two countries allowed for focus on the type of trade and investment that would drive growth in South Africa and the US.

“We see significant scope to expand our trade and investment ties, and could easily double our trade ($20-billion in two-way trade and services) and triple our investment levels. It is important for South Africa to offer a conducive environment for investors – both domestic and international,” she said.

The US Embassy did not say whether they had raised the allegations made against their government with the Department of International Relations and Co-operation (Dirco). Dirco spokesman Clayson Monyela also did not respond directly to a question about whether the allegations against the US government had been discussed. He said the annual strategic dialogue was a structured mechanism where issues of mutual concern of the two governments were discussed. He did not disclose what these were.

Asked to comment on Mantashe’s statement this week regarding regime change, Monyela said via SMS:

“The views of the SG of the ANC don’t reflect the views nor the SA government’s approach to US-SA relations. Our bilateral relations are strong, warm and cordial.”

The EFF said Mantashe’s comments were symptomatic of political paranoia.

“They signify a party that is afraid of losing power, which is now seeking to mobilise support in the continent under the pretext that it is the West, and not the genuine demands of the people that are looking for regime change,” EFF spokesman Mbuyiseni Ndlozi said.

The Congress of the People (Cope) said Mantashe’s comments were “bizarre, baseless and spurious”.

“It is common cause that when a lie is spoken often enough, it becomes politics,” Cope spokesman Dennis Bloem said. “Every movie has to have a villain and every failing government must indeed have counter-revolutionaries to blame. That is the bizarre situation in which the failing ANC finds itself.”

Indeed, it does seem that Mantashe has been watching too many political thrillers and has a problem distinguishing between civic activity in a healthy, dynamic democracy and a subversive plot against the government. Civil society has become more involved in the national discourse but this is as a result of actions of the South African government, not any Western power.

People have been speaking out and mobilising against the government on issues such as the violation of the high court order to arrest Sudanese President Omar Al-Bashir, the involvement of the Gupta family in the running of the state and the violation of the Constitution by President Jacob Zuma and the National Assembly. People are losing faith in the ANC because of its disastrous leadership and failure to protect the integrity of the state on issues such as these, not because foreign forces are paying them to become disenchanted.

It might be easy to dismiss Mantashe’s comments as those of a crotchety ANC godfather who does not reflect the official position of the South African government. But Mantashe is the administrative head of the ANC who has the power to summon deployees in the state and direct their actions. Let’s also not forget that the person who served as secretary-general before Mantashe ended up being sworn in as a minister and then a president without trying to be any of these things.

While Kgalema Motlanthe was diplomatic in his manner and his ambitions, Mantashe is not. He has designs on higher office and is a contender for the position of ANC deputy president in the next term. Who knows where his ambitions might lead him after that and whether at some point, he might be directing South Africa’s foreign policy?

While the country’s foreign relations are relatively well managed now, the penchant for chasing bogeymen and making spurious allegations against other governments could backfire in the future in terms of trade and diplomatic relations. The government under Zuma is already its own worst enemy in the management of the economy and democratic institutions are being sabotaged by the very people who are meant to protect them.

South Africa should never pander to any other nation and we should always protect our sovereignty. If foreign governments are involved in dirty tricks in our country, these need to be confronted directly through the correct channels in the state, not through persistent wild allegations that have no basis.

And someone needs to school Mantashe on the difference between the forceful removal of a “regime” and free political activity in a democratic state. Some lessons in diplomacy might also be advisable if South Africa is to avoid going to war should Mantashe relocate from his perch at Luthuli House to a hot seat in the Union Buildings. DM