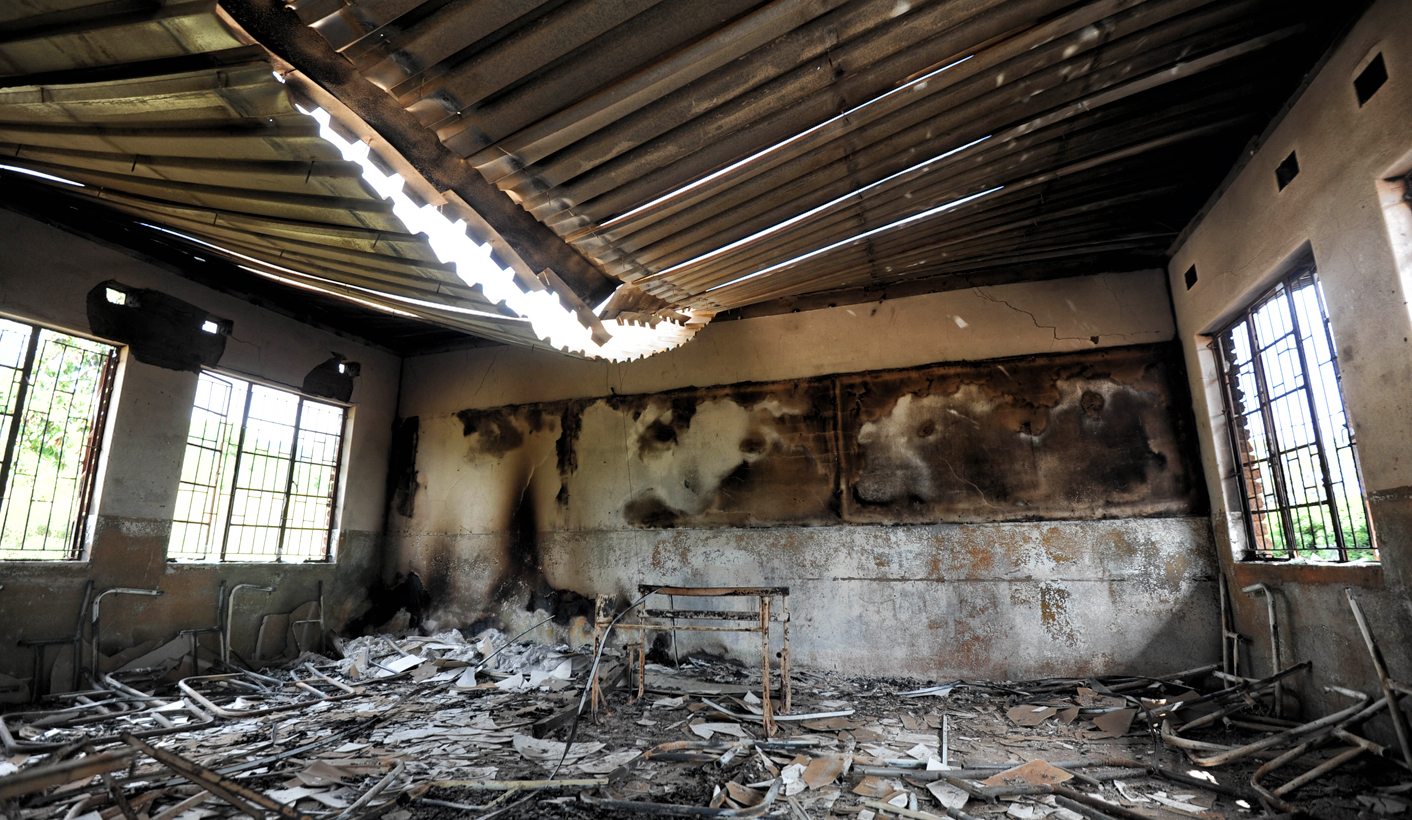 The Vuwani area resembles a ghost town, filled with scenes of textbook graveyards, charred walls and the remaining skeletons of furniture that once was. Basic Education for All (BEFA) and Section27 visited 22 out of 24 schools damaged or destroyed by fire in Vuwani, Limpopo at the beginning of May this year. By KATE PATERSON and TINA POWER for SECTION27.

The violence that led to the destruction of these schools is devastating. Learning has been severely compromised, exam preparation has been suspended and there are thousands of pupils stuck in a state of paralysis, not knowing when learning will resume. In some schools, records of admission numbers and pupils’ results have been lost. The effects of this will be felt for years to come. Even if learning resumes swiftly and new buildings are built, the crisis in Vuwani has dealt a destructive blow to an already struggling system.

However, we believe all is not lost and amid the devastation we found tales of resilience and triumph of the human spirit. There have been notable efforts by communities to protect their children’s schools, where teachers and parents take shifts to guard the schools and in turn safeguard their children’s rights to a basic education.

Reporting beyond the crisis

We have consistently attempted to give context to this violence. In doing so, we are in no way justifying the actions of the arsonists. They have prejudiced the future of thousands of pupils. They have entrenched structures of oppression and gained nothing for their community. It is absolutely imperative, however, that this context is given. The crisis in Vuwani will not be solved by punishing a small group of the protesters, no matter how serious the consequences for them individually may be.

The reporting of the events in Vuwani has often placed the crisis in a vacuum, and simplifying the problem does not help. Such reporting does not contribute to addressing the broader systemic issues. Oversimplifying the matter fails to force both the citizenry and the government to engage with creative solutions to respond not only to the immediate crisis but the more deeply-rooted problems.

Protesting against the demarcation

The Bavhenda community in the Vyeboom area in Vuwani have been engaged in service delivery protests at least annually since 2011. This has always been linked to municipal demarcations. Initially, the protesters demanded the community be moved from the Makhado municipality to the Thulamela municipality.

Demarcation decisions are never “just” demarcation decisions in this context. They are loaded with the hopes and disappointments of communities that have often been failed by their municipalities. The decision concerns every woman who is still forced to walk kilometres to fetch water, every person standing in long queues in clinics to be told the medicine they need is not available, and every child learning in a classroom without a table and chair to sit on.

The anger felt by the community can be seen through one Twitter user from Vuwani who has expressed several strong remarks indicating that “burning of schools was a last resort” and that the “root of all that’s happening” is the “lack of service delivery”. She listed the lack of water and the high rates of youth unemployment among her complaints. Responding to reports that the fires caused R400-million worth of damage, she said, “If that R400m had been used appropriately in the past 5 years or so, schools would still be standing.”

On the state of education in Limpopo

Approximately 5.5-million people live in Limpopo, nearly half (50%) of whom are unemployed. In its most recent study on poverty trends, StatsSA identified Limpopo as having the highest poverty levels in the country. The effects of this are often felt by the pupils of Limpopo, who are mostly provided with basic education that is far from the quality of education to which they are entitled. While some schools are showing signs of development and progress, others reflect the state of poverty as a heartbreaking reality. The 2016 provincial budget on education noted that there is a shortage of 41,000 toilets, of which more than eight out of 10 (83%) are pit toilets that need to be replaced. The budget further acknowledges that there is a staggering shortage over 10,000 classrooms across the province.

SECTION27 represents 132 schools in Limpopo, of which over 50 rely on pit toilets, some of which are full, some are found inside broken corrugated iron structures, others are inhabited by snakes and there are some schools that have no working toilet facilities at all. More than 35 of the schools we represent have reported missing or broken furniture where pupils are required to share tables or sit on the floor. School infrastructure has been a common concern among the schools we represent. There are several incidences were pupils are forced to go home when it rains – either because there are electrical concerns or there is no ceiling or only part of a ceiling to shelter the pupils. There is one school that has been unsuccessfully trying to insure its new textbooks because the infrastructure will not protect the books against the elements. We have received reports of more than 17,000 textbook shortages since the start of the 2016 school year.

The Vhembe district, where Vuwani is located, is home to 1,023 ordinary public schools, accommodating approximately 410,000 pupils. Vhembe was the highest performing district in the National Senior Certificate results in the province in 2014 and 2015. We represent 31 schools in Vhembe, four of which appear on the Limpopo Department of Education’s list of schools affected by the strike. Of those four, two were burnt and vandalised: Tshinavhe and Vhafamadi.

Vhafamadi Secondary School has almost 850 pupils. They have recently been provided with enviro loos but there is insufficient access to water. They are in need of furniture and the growing cracks in the classroom walls are placing pupils and teachers in danger.

Tshinavhe Secondary School had relatively good sanitation, which required maintenance due to flooding. New classrooms had been built in 2015 and the school did not have any problems with infrastructure or furniture.

Our concern is that the money required to urgently fix fire-damaged schools will need to be diverted from schools with pre-existing urgent infrastructure requirements.

The Minister of Basic Education in her budget speech on 10 May 2016 reported that the estimated damage is R720-million. In a province where schools are already struggling due to financial restraints, mismanagement and lack of service delivery, it is a daunting task to comprehend how resources must be allocated to ensure that all those in desperate need are catered for.

Both the national and the provincial department should be commended for their response to the crisis so far, together with the Limpopo provincial government and the houses of traditional leaders. The manner in which the collective response was organised indicates a level of co-operative governance as required by our Constitution. The school principals with whom we have spoken were comforted by engagements with the team.

Vuwani has been declared a disaster area so that funds can be quickly released to begin rebuilding schools and providing alternative, interim classrooms so that learning can resume quickly. We hope that this spirit of co-operative governance will be brought into the planning and accommodation process for these 24 schools, and into urgently fixing the thousands of schools in Limpopo that have existed for years with unsafe infrastructure. DM

Kate Paterson is an attorney specialising in the right to a basic education at SECTION27.

Tina Power is a Students for Law and Social Justice Fellow at SECTION27 working on the right to basic education.