amaBhungane: Broken Trust in Mapela – the people, the kgoshi and the cool R175m 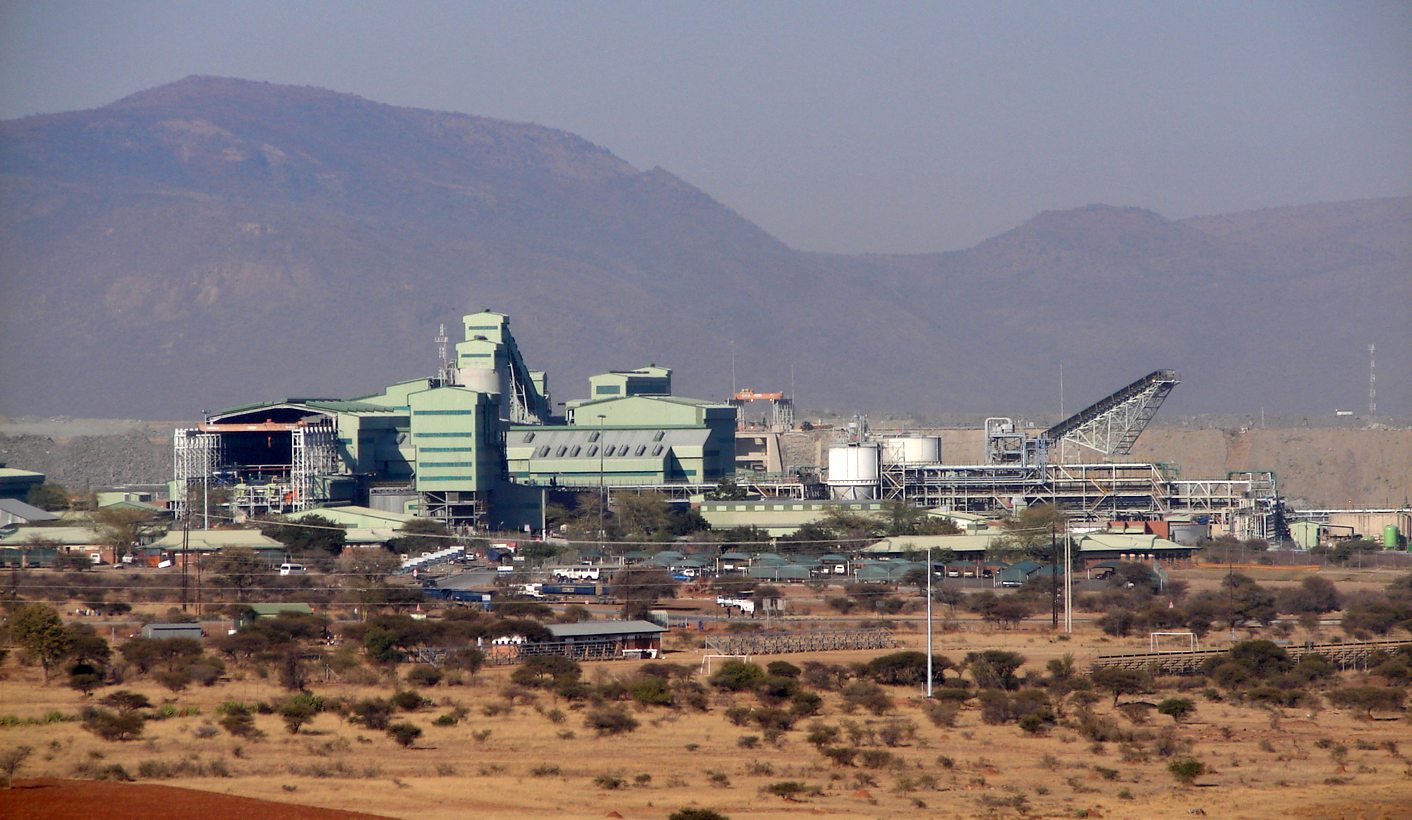 They certainly didn’t look like people who had just had R175-million showered on them. Anger and confusion were the prevailing emotions as hundreds of community members converged on the Mapela Traditional Office, near Mokopane in Limpopo, last month. By MASHILE PHALANE for AMABHUNGANE.

Young and old, locals and out-of-town visitors in big, shiny cars, members of the Mapela royal family and ordinary people crowded into the parking lot outside the local authority hall, now under reconstruction after being burnt down in a mining-related protest last year.

At stake was a “settlement agreement” recently signed between the local chief and Anglo Platinum subsidiary Rustenburg Platinum, under which “the Mapela community” will receive a cool R175-million in trust.

Unfortunately, members of the community say they know nothing about the agreement, the trust or the cash.

Amid loud chants of support, the three-hour meeting closed with 456 people coming forward to sign over power of attorney to human rights lawyer Richard Spoor to fight the settlement in court.

Notably absent from the gathering were the signatory, Kgoshi (Chief) David Kgabagare Langa, and a number of headmen associated with him. Participants showed amaBhungane a letter from Langa to headmen instructing them to stay away.

The purpose, they alleged, was to avoid lending credibility to the meeting and the Mapela Executive Committee (MEC), which called it and claims to speak for the ordinary villagers of the area.

It is a classic conflict between traditional and grassroots politics, sparked by the minerals beneath Mapela’s communal land. in a letter amaBhungane has seen, Langa insists he is legally bound to consult only the traditional authorities, including the tribal council he heads.

An MEC member held up to the crowd the document that has caused all the trouble – the settlement in respect of the nearby Mogalakwena platinum mine.

Under it, R90-million has already been moved to the traditional council’s lawyers, Fasken Martineau. A further R85-million will be transferred before the end of next month, once a corporate structure has been set up to manage the “mining, social and commercial interest to benefit the community”, Angloplats says.

Its spokeswoman, Mpumi Sithole, said the money would provide “seed capital for creating a sustainable, long-term and diversified growth for the community”.

The board of trustees has not yet been appointed, but according to Spoor it will be dominated by the kgoshi. He will chair it, while the traditional council, which he controls, will appoint one trustee. The council of headmen would appoint one and the company another.

The remaining two “independents” will be chosen by the kgoshi from community nominees.

In an apparent move to regularise its relationship with local people, Angloplats is revisiting mining leases and the community “dividend” from Mogalakwena, one of its key assets.

But by dealing only through the kgoshi, it may have miscalculated. In speech after speech at the meeting, residents complained of being kept in the dark.

The company believes the R175-million will resolve what it calls “legacy issues” with the Mapela community – but it may be in for a surprise. Participants at the meeting complained about dust and blasting from the mine and a lack of jobs for their children.

Also present were people from villages relocated to make way for mining, who are angry about their conditions. “They are unhappy – we represent them, they are part of our community,” said executive committee chairperson Chipa Langa.

The committee argues that the kgoshi has broken customary and statute law by failing to consult and that the traditional council has no legal standing because it is not properly constituted – a charge he rejects.

The claim is that the council has not presented annual accounts and that 40% of its members have not been elected, as the law requires.

The Auditor-General’s office confirmed that it “has not yet received annual financial statements that are auditable [from the tribal and trust accounts in Limpopo], as the statements submitted do not comply with the required accounting framework. This matter has been a topic of discussion with the provincial leadership.”

Under the interim Protection of informal Land Rights Act, no one can be stripped of land rights without their consent, while a decision to dispose of a right may only be taken “by a majority of holders present or represented at a meeting … for the purpose of considering such disposal”.

And according to the Limpopo Traditional Leadership and Institutions Act, chiefs must actively participate in their community’s development. The MEC chairperson complained that the kgoshi has homes in Waterkloof, Pretoria, and Cape Town “so he doesn’t have our feeling and suffering at heart”.

“That’s not true, I reside in Mokopane,” the chief told amaBhungane.

The Mokopane conflict has been replicated in other rural communities, notably Xolobeni on the Wild Coast. It arises, in part, over mining companies’ insistence that they are legally bound to deal with South Africa’s traditional powers.

Spoor disputes this, arguing that the customary landholding system in Mokopane is highly decentralised.

Anglo Platinum’s Mpumi Sithole said the company noted the committee’s concerns, but added that “we are required to engage with traditional authorities”.

“We have referred these concerns to Kgoshi Langa and are confident that he will address them in a manner consistent with the laws, customs and traditions of the community.”

Asked about the committee’s complaints that they have not seen key documents, including the deed of trust, Sithole said, “Please refer to Kgoshi.”

She also “referred to Kgoshi” allegations that he, and his mother before him, have a poor record of representing the interests of the community in dealings with the mines – a charge he rejects.

Asked about claims that the traditional council has not been properly constituted, and that Angloplats may have transacted with a body without legal standing, Sithole replied: “Please refer to Kgoshi, will send you contact details for his legal representatives.”

In an exchange of correspondence with the committee in February this year, Langa showed little willingness to compromise. Asked not to sign the final agreement because he had no authority to do so, he indicated that he did not regard the MEC “as a legally recognised structure of the community“.

Claims that he had not consulted were “incorrect”, he said. He had consulted the community’s leaders “including the various heads of the dikgoro” – the headmen.

“I disagree that the provisions of the Interim Protection of Informal Land Rights are applicable in this instance.”

Responding to a demand for information, including the trust deed, the final settlement deal, the financial data on which the R175-million was based and copies of all mining lease agreements, he said his legal obligations were towards the traditional council and the “community’s broader leadership”.

“I am thus not in a position to furnish you with any further documents regarding this matter.”

Last month, he restated the position to amaBhungane: “Please note that the MEC is not a legally recognised structure within the community. In terms of the customary practices … I have done what is needed to finalise the agreement.”

Hanging over the settlement is the eruption of violent protests last August over the perceived lack of benefits from mining. A school and a chief’s house – media reports do not specify which chief – were burnt down.

Following the intervention of minerals minister Ngoako Ramatlhodi, a task team was set up to represent local interests, with the South African Human Rights Commission assisting.

This “agreed on a road map to resolve the disputes”, Sithole said. “We believe community members will use these structures should there be concerns. We have not noted any incidents of violence in and around the Mapela villages in the recent past.”

But the task team itself seems to have been blindsided. Its secretary, Malesela Mabula, told amaBhungane that he rejected the signing of the agreement as “we were also not consulted”. DM