Crisis, What Crisis? In Parliament: Slings and arrows everywhere, but none reaching Zuma 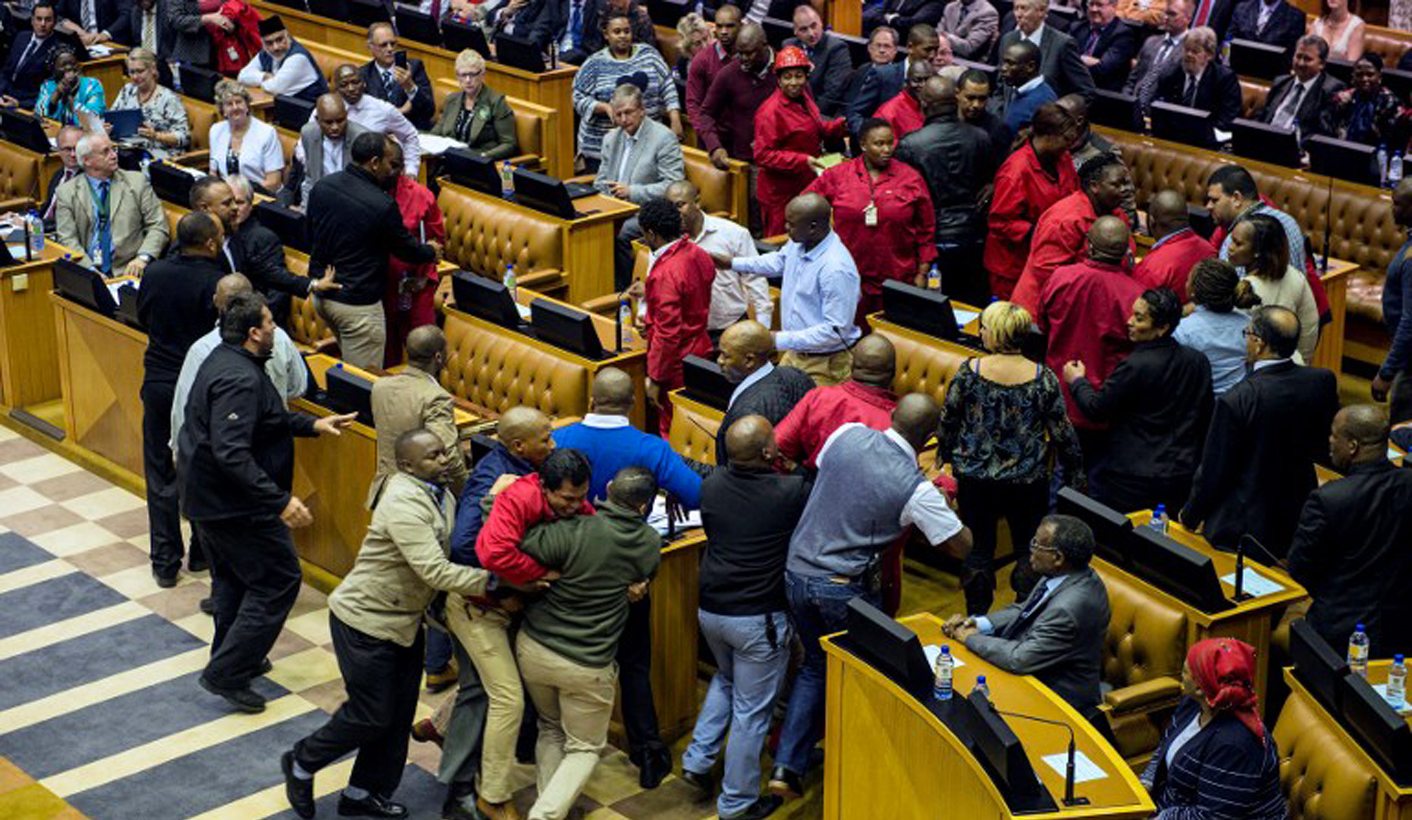 President Jacob Zuma spoke about everything except his office’s R505.7-million budget on Wednesday in Parliament. Ticking boxes mostly already ticked during his February State of the Nation Address, he talked of building South Africa’s better life “brick by brick” and educating “the children of peasants… to become medical doctors, lawyers, captains of industry or rocket scientists”. But following two recent scathing court judgments, the EFF and DA tackled Zuma’s integrity as president. As the ANC maintained no court had found the president guilty of anything, Zuma looked on mostly stony-faced. By MARIANNE MERTEN.

It was late into an over six-hour debate marred and prolonged by acerbic verbal sparring across the floor of the National Assembly when DA Chief Whip John Steenhuisen delivered a biting rebuttal of various ANC speakers touting its government’s delivery track-record and of Zuma himself.

“When this House tried to hold you (Zuma) to account, the most presidential response you could muster was a silly jig about Nkaaandlaa!” said Steenhuisen referring to comments Zuma made in mock posh English in his reply to last year’s presidency budget vote debate. “That’s the ugly head of impunity,” said the DA Chief Whip – who repeated this phrase six times in total during his eight-minute speaking time – before adding that various ministers involved in this Nkandla project had learnt “the hard way that there is no bridge that this man (Zuma) will not double-cross to protect himself”.

While Steenhuisen congratulated Deputy President Cyril Ramaphosa for speaking all 11 official languages in his debate contribution on South Africa’s good story, “unsubstantiated fluff is unsubstantiated fluff no matter what language”. He went on to tell Ramaphosa, a former businessman, he was in a difficult spot: “Your previous boss Ronald McDonald has more credibility than your current boss.” After all, Steenhuisen added, Zuma put the ANC and Luthuli House before the country and Parliament.

There was not a single point of order from the ANC benches, which in a clearly strategised volley of such objections earlier in the debate managed to shut down DA leader Mmusi Maimane.

Closing the debate for the ANC was Deputy Minister in the Presidency Buti Manamela, who hauled out a dribbling plastic water gun for Economic Freedom Fighters (EFF) leader Julius Malema (not in the House). It was a contrived dig over recent comments made to Al Jazeera that the EFF would remove the government through the barrel of a gun if the ANC continued to mete out violence.

Manamela, like those before him, extolled the ANC’s delivery track record and efforts to find solutions for the country’s problems, while the opposition only complained and “opposed, opposed, opposed”. In an effort at a tongue-in-check turn on the DA’s motto that it was for change, Manamela said come 3 August the ANC would be looking for change. “Yes we need change… We need a new opposition.”

Wednesday’s debate on the presidency budget, officially known as Budget Vote 1, was a terse display of party politicking in an election year. Any observer unfamiliar with the state of South African politics would have been left wondering if there was not a national outbreak of schizophrenia.

It all started with the EFF arguing Zama could not be allowed to speak as he had violated the Constitution by failing to uphold, respect and defend the country’s supreme law. “We can’t allow an illegitimate president to speak here as if nothing has happened. He must not speak here… He can go speak at ANC meetings,” said EFF Chief Whip Floyd Shivambu. EFF MPs Mbuyiseni Ndlozi and Godrich Gardee chipped in to support this request made in writing to Speaker Baleka Mbete earlier in the day.

Mbete, also the ANC national chairperson who is in the chair when Zuma speaks in the House, dismissed this. There were structures in Parliament to schedule such matters and the business for the day was the presidency budget, she ruled: “There is no basis for this House not to allow the president to speak”. Ndlozi objected – “We are going to debate giving him money… when he is facing over 700 charges of corruption” – and Mbete started naming EFF MPs before calling in the parliamentary protection services to escort them out of the chamber.

“The person who must leave the house is Jacob Zuma. He broke his oath of office,” said Ndlozi.

After being ejected from the House, the point was made again outside: Zuma would not find peace until he was “held accountable to the fullest”, said Shivambu. The EFF is also rechecking with police on charges laid over their forcible eviction from the 2015 SONA, and was considering updating these with Wednesday’s eviction by the parliamentary protection services personnel all dressed in different outfits and without identification tags.

With the EFF gone, the scene was set for Maimane, whose DA after an eight-year legal fight last week successfully obtained a court ruling to effectively reinstate the 783 charges against Zuma that were dropped in April 2009, just before that year’s elections. It is now up to the National Prosecuting Authority (NPA) to decide on whether to prosecute and, if not, to say why not – unless Zuma decides to appeal the judgment.

But Maimane, who called Zuma a “thief”, “looter in chief” and “Accused Number One”, faced a barrage of points of order from the ANC that no court found the president guilty of anything. Ultimately he had to withdraw these statements as unparliamentary language. But court action is brewing over rulings which the DA said effectively stifled freedom of debate: while on the streets it was permissible to quote from court judgments, Wednesday’s rulings on Maimane’s speech indicated that it was not so in the House.

The ANC points of order to shut down Maimane had a rehearsed feel to it. But Wednesday’s presidency budget debate was an occasion for the governing party to close ranks in another public show of party unity.

ANC chief whip Jackson Mthembu, who had preceded the DA leader, set the tone. “We know that history has called you (Zuma) at a time like this because of your wisdom, your down-to-earth attitude, your people-to-people skills, your patience and your understanding is what our people need to traverse this rather difficult path.”

Only the ANC could improve the lives of South Africans, regardless of whatever criticism may come from others, he added, because only the ANC has had the “magnanimity” and “good heart” to forgive those who tortured, jailed and exiled its members and leaders.

The IFP decorum and protocol was on display even as the party president Mangosuthu Buthelezi said he agreed with his colleagues in the opposition. “I was not raised to say things like ‘Zuma must voetsek’. We as the IFP believe in restoring dignity and honest debate to this House and to politics,” he said.

Cope boycotted Wednesday’s debate. There also was no speaker from the United Democratic Movement.

With the EFF out, and Maimane effectively silenced through points of order, it was the turn of Minister in the Presidency Jeff Radebe (his contribution sounded naggingly familiar to many of previous presentations) and Deputy President Cyril Ramaphosa, who spoke of the good story.

“This story is written by millions of ordinary S Africans, who are working together with government, many social partners…” Ramaphosa said.

With everyone out or shut out, it was all happily back on track. Zuma got a standing ovation before he said a word, and again afterwards. And the presidency budget debate concluded shortly before 21:00, well beyond its initially scheduled 266 minutes, with chants of “ANC! ANC! ANC!”.

On Thursday afternoon, Zuma responds to the debate. DM

Photo: Economic Freedom Fighters MPs are pushed out of a parliament session during President Jacob Zuma’s budget speech in Cape Town on May 4, 2016. Photo: AFP/STR