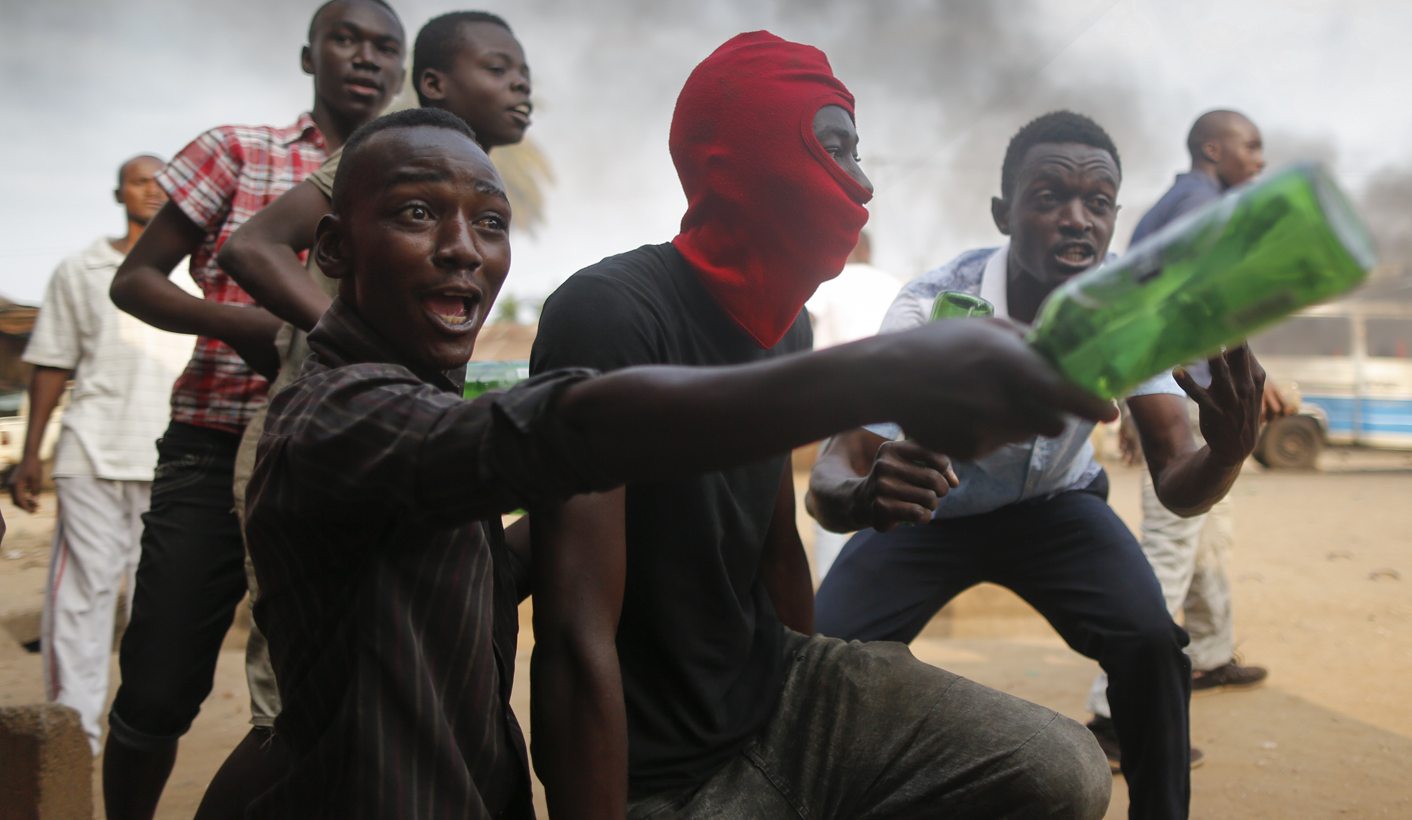 Although it may have disappeared from the headlines, the situation in Burundi remains dangerously unstable, while the violence has evolved rather than disappeared. By SIMON ALLISON.

This, according to Marie-Louise Baricako, a prominent gender activist from Burundi, is what life is like at the moment for that beleaguered country’s citizens.

“In Burundi you can’t say ‘trouble areas’, because trouble can be in any area. What is safe today is not safe tomorrow. Civilian life today is a life of fear, a life of uncertainty, and not knowing exactly what is happening tomorrow. People plan only for the next 24 hours. Anything can happen. When they come into your home, they take the men and the boys and inside they rape the wife and the daughters. It’s incredible, you cannot describe it, but what is happening in Burundi should be a question of morality for the whole continent of Africa,” she told Daily Maverick.

Baricako was speaking from New York. She was forced to flee Burundi along with more than a quarter of a million others, but is using whatever influence she has to persuade the United Nations to intervene more forcefully. Even though the situation in Burundi may have slipped from the headlines, the situation has not improved, although both the government and rebel groups are becoming more sophisticated in how and when they use violence.

So far, the response from the African and international community has been concerned but toothless. A handful of African Union observers have been deployed, but remain stuck in their hotel in Bujumbura. A proposed military intervention never got off the ground. Stuttering peace talks have been entirely ineffective, with the latest round – scheduled to begin last week – delayed yet again, to give Tanzanian mediator Benjamin Mkapa more time to convince the government to give armed rebel groups a seat at the table.

Most recently, in early April, the United Nations Security Council agreed to send a United Nations police force to stabilise the situation – although the size and mandate of this force has yet to be decided. There are several options on the table, ranging from a few dozen officers who would work with Burundian police to a muscular, 3,000-strong mission that could provide physical protection in vulnerable areas. This latter option, while probably the most effective, is logistically difficult, if not impossible: finding funding would be tough, while Burundi’s government has repeatedly indicated that it would not co-operate with anything that size.

Like many other observers, Baricako is sceptical that the talks will achieve anything, and is pushing for a more forceful response. “I sometimes wish I was able to use weapons… when we are talking about peaceful solutions, they look at me and say they want us to die helplessly and not defend ourselves? And wait for a peaceful solution? Where is it going to come from? That peaceful solution, that dialogue, it is not something the government is taking willingly,” she said.

The troubles in Burundi began around this time last year, when it became clear that President Pierre Nkurunziza intended to run for a third term in office – in direct defiance of the spirit, if not the letter, of the Arusha Accord which ended the civil war in the early 2000s. Over the following few months, there was fierce public opposition to this decision, accompanied by an equally fierce crackdown. An attempted coup was quickly suppressed, while security forces and civilian militias loyal to Nkurunziza began targeting sections of the population thought to be sympathetic to the opposition. In response, several rebel militias were created, with alleged support from Rwanda.

Since then, the violence has been cyclical, its ups and downs often correlated with how international stakeholders engage with the government. And the violence is evolving. “Through the cycle of ups and downs you also have a different victimology. It’s not always the same people who are targeted. The bulk of the violence at the beginning was arrests of young opposition youth throughout the contested neighbourhoods, and then more targeted assassinations, and when armed groups started emerging you had targeted attacks on government institutions and security sector individuals,” said Yolande Bouka, senior researcher at the Institute for Security Studies.

Most recently, the Guardian reported that the battlefield is within Burundi’s army itself. “Assassinations of senior officers and secret defections are crippling Burundi’s army, one year into a crisis that has created hundreds of thousands of refugees and led to the revival of hate speech previously used to fuel genocidal massacres. The military was once a symbol and defender of the country’s reconciliation, with quotas for majority Hutus and minority Tutsis that prevented it becoming the fiefdom of either group. But it is now being ripped apart by fear, suspicion and the destruction of its top ranks,” wrote Emma Graham-Harrison.

Tensions between Hutus and Tutsis are a major element of the current unrest. At times, government rhetoric has been alarmingly similar to that which preceded the 1994 Rwandan genocide, raising fears that something similar could unfold in Burundi.

According to Baricako, it’s already happening. “A genocide is there. I don’t know the form it will take. It will not take the massive killing at one point. What is happening and what is being said is they will kill one by one which means that actually it has started already. One by one has been happening for a whole year. The speeches are very strong against the Tutsi. I don’t think others will protect the Tutsi.”

Bouka, however, cautions against reducing the conflict to ethnicity. “I think you never want to say the ethnic card is not valid, but what’s happening in Burundi is completely different to Rwanda in 1994. The crisis has been ethnicised a lot because of the way the government has been engaging in very violent rhetoric against the Tutsi in general. But the government can’t put aside the reality that a lot of its opposition is anchored in people who are close to the government…I’m not too concerned about a mass genocide, I’m concerned about repeated patterns of violence which we’ve seen historically where the government engages in mass violence against political groups,” said Bouka.

“My question is why does it matter if the violence is ethnic or political before we take this seriously?” she added. DM

Photo: Burundian protesters react as they face with police officers firing shots toward them during an anti-government demonstration against President Pierre Nkurunziza’s bid for a third term in the capital Bujumbura, Burundi, 26 May 2015. The Burundi crisis started after an announcement from the President Pierre Nkurunziza that he intended to run for a third term mandated in the upcoming elections. The statement sparked various protests in all over country, generating clashes from the government supporters and opposers. EPA/DAI KUROKAWA