Stalingrad Strategy: A few moves and pawns still remain on Zuma’s chess board 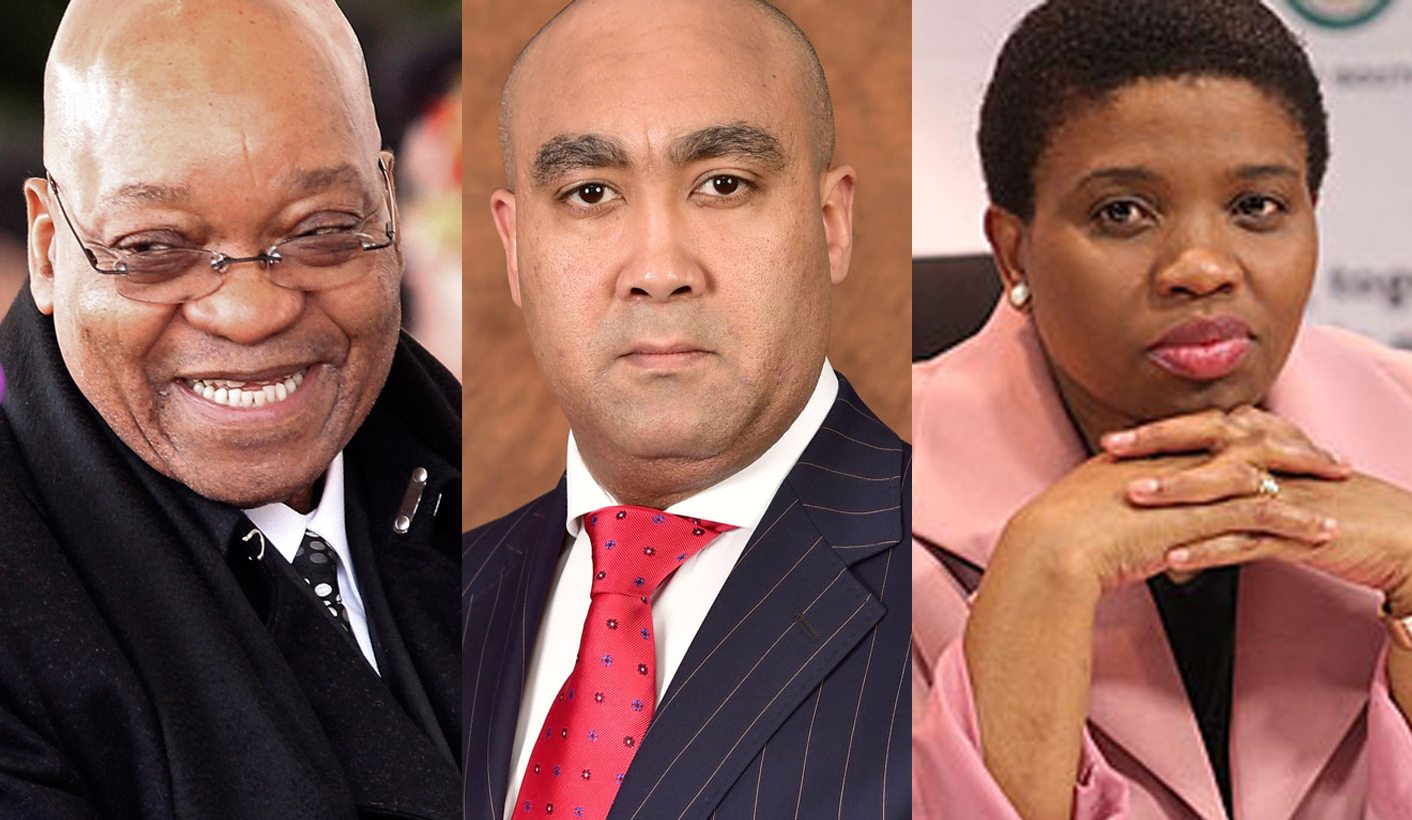 Deputy Judge President Aubrey Ledwaba might have plowed through one of the flanks of President Jacob Zuma’s seven-year, massively costly legal bid to shrug off more than 783 charges of fraud, racketeering and corruption related to the Arms Deal, but a few obstacles still remain. Defending the last remaining ramparts of the Stalingrad Strategy the president has employed to delay last Friday’s judgment are his hand-picked doorkeepers, NPA head Shaun Abrahams and his Deputy Director of Public Prosecutions, Nomgcobo Jiba. By MARIANNE THAMM.

The recent ruling by a full bench of the North Gauteng High Court and delivered by Deputy Judge President Aubrey Ledwaba sent a clear message to NPA head Shaun Abrahams: the prosecuting authority is not a law unto itself.

Former Acting National Director of Public Prosecutions, Mokotedi Mpshe, in deciding to withdraw the charges against Jacob Zuma in 2009, ruled Judge Ledwaba, “had ignored the importance of the oath of office which demanded of him to act independently and without fear or favour”.

“Mr Zuma should face the charges as outlined in the indictment,” Judge Ledwaba concluded.

But will Abrahams have the backbone to do what the law requires of him and can South Africans rely on the NPA under his leadership to uphold the same oath and act independently? Especially considering that another teflon Zuma team player, Advocate Nomgcobo Jiba, is one of Abrahams’ deputies and occupies one of the most powerful positions, that of head of the NPA’s National Prosecution Services.

Patricia De Lille, who first exposed the widespread corruption of the the Arms Deal, told Daily Maverick that there was no way the NPA could be trusted.

“President Zuma has strategically appointed people who will take instructions from him. The authority is compromised in so many ways. So many institutions have been compromised for just one man. Just about everyone left at the NPA is implicated,” she told Daily Maverick.

De Lille added that President Zuma’s “comrade in arms”, Schabir Shaik, who was found guilty of fraud and corruption in 2005, “must find solace in the fact that charges have been reinstated against President Zuma and Zuma must face an open court of law. President Zuma must accept that he is not above the law.”

The fact that the NPA has told media that it needs “to apply its mind” to last Friday’s judgment suggests it is buying time and that it does not have the appetite to reinstate the charges of corruption, money laundering, fraud and racketeering against President Zuma.

The sound of silence emanating from the NPA’s head office in Silverton, Pretoria can only be read as one of balls being quietly squeezed in a legal vice. Refuse to investigate and risk facing criminal charges and a shredded reputation or investigate, earn the wrath of an increasingly cornered No 1 and his acolytes, and let the courts decide.

On Tuesday the DA’s Federal spokesman, James Selfe, said that a further reading and a legal opinion on Judge Ledwaba’s ruling has made it clear that the charges were erroneously dropped by the NPA in 2009 and are automatically reinstated.

“The National Director of Public Prosecutions (NDPP), Advocate Shaun Abrahams, is duty-bound to proceed with the prosecution,” said Selfe.

He added that a full bench of the North Gauteng High Court had found that “the envisaged prosecution against Mr Zuma was not tainted by the allegations against Mr McCarthy. Mr Zuma should face the charges as outlined in the indictment”.

This legal precedent had been established most recently in the Mdluli matter when Judge John Murphy found that the dropping of charges of fraud and corruption against the former head of crime intelligence was determined to be without legal basis and their setting aside as “irrational”.

“This should apply in this matter too. This is a golden opportunity for Adv Abrahams to show his independence and proceed with this prosecution as planned, and give Jacob Zuma a court date,” said Selfe.

It was another NPA deputy National Director, Willie Hofmeyr, who earlier this year, in a damning affidavit included in another DA court bid to suspend Jiba, accused Abrahams of lying when he claimed that it was regional head of the specialised Commercial Crimes Unit, Advocate Marshall Mokgatle, who had opted to withdraw charges of perjury against Jiba. It was Abrahams himself, said Hofmeyr, who had made the decision while disregarding the opinion of two other NPA prosecutors.

Jiba had been charged by Abrahams’ predecessor, Mxolisi Nxasana, after the Durban High Court had overruled her decision to charge KwaZulu-Natal head of the Hawks, Johan Booysen. In that case, Judge Trevor Gorven ruled that Jiba’s decision to charge Booysen did not meet the barest minimum requirements and was in fact illegal. Jiba had effectively committed perjury and fraud as her decision to prosecute was based on nonexistent evidence.

Booysen was investigating, among others, Durban businessman Thoshan Panday who has close links to the Zuma family and particularly his son Edward and President Zuma’s cousin, Deebo Mzobe. Panday has miraculously managed to wriggle his way out of charges of bribery and corruption.

Hofmeyr added that Abrahams’ conduct “suggests to me that there is a systematic pattern of protecting Ms Jiba and others improperly, not just in this case, but in others as well. It suggests that he has chosen to align himself with their agenda”, claiming later that “while she [Jiba] was acting NDPP, she openly boasted about her close relationship with the then Minister of Justice and how she could persuade him to do whatever was needed for the NPA”.

These attempts by Jiba to engage in activities that are in support of political groupings, said Hofmeyr, were not new.

Nxasana resigned in May 2015 taking a R17.3-million settlement after serving 17 months of his 10-year contract. A month later, after his appointment by President Zuma, Abrahams dropped charges of perjury against Jiba as well as “reshuffling” the NPA executive, shifting Jiba to head the National Prosecution Services, the highest decision-making body in the NPA.

So, we can see where this is headed.

Jiba has faced censure in various court actions including withdrawing murder charges against Zuma’s point man Richard Mduli, the Booysen charges, procuring a warrant for arrest for prosecutor Gerrie Nel, as well as for delaying the DA’s “spy tapes” application which was finally put to bed by Judge Ledwaba last Friday. The General Bar Council has applied to have Jiba struck off the roll of advocates and the case is proceeding.

The man who headed the Bumiputera team which originally investigated the charges of fraud, corruption, money laundering and racketeering against Zuma was Advocate Billy Downer. In June 2015, Downer supplied a confirmatory affidavit submitted to the court in the DA “spy tapes” challenge in which he stated that the team was opposed to former National Director of Public Prosecutions Bulelani Ngcuka’s decision to not prosecute Jacob Zuma.

He added that the team was confident of the “prospects of a successful prosecution of Zuma on charges of corruption”.

“I confirm that I urged Ngcuka to prosecute Zuma. I did so on the basis of the prosecution team’s assessment of the strength of the evidence against him. The prosecution team believed that there were reasonable prospects of success,” said Downer.

And so the investigation and indictment, which runs into thousands of pages, exists and is essentially ready to go. Any delays now can only be viewed as the last few moves in President Zuma’s legal Stalingrad Strategy. We can expect this case to shuffle its way to the highest court of the land.

And as with the battle after which it is named, there will be many casualties along the way. Depending on how he decides, Shaun Abrahams might be one of them. The Battle of Stalingrad occurred in a devastating war; this battle of Stalingrad is playing out in a constitutional democracy where the judiciary has displayed its independence. DM