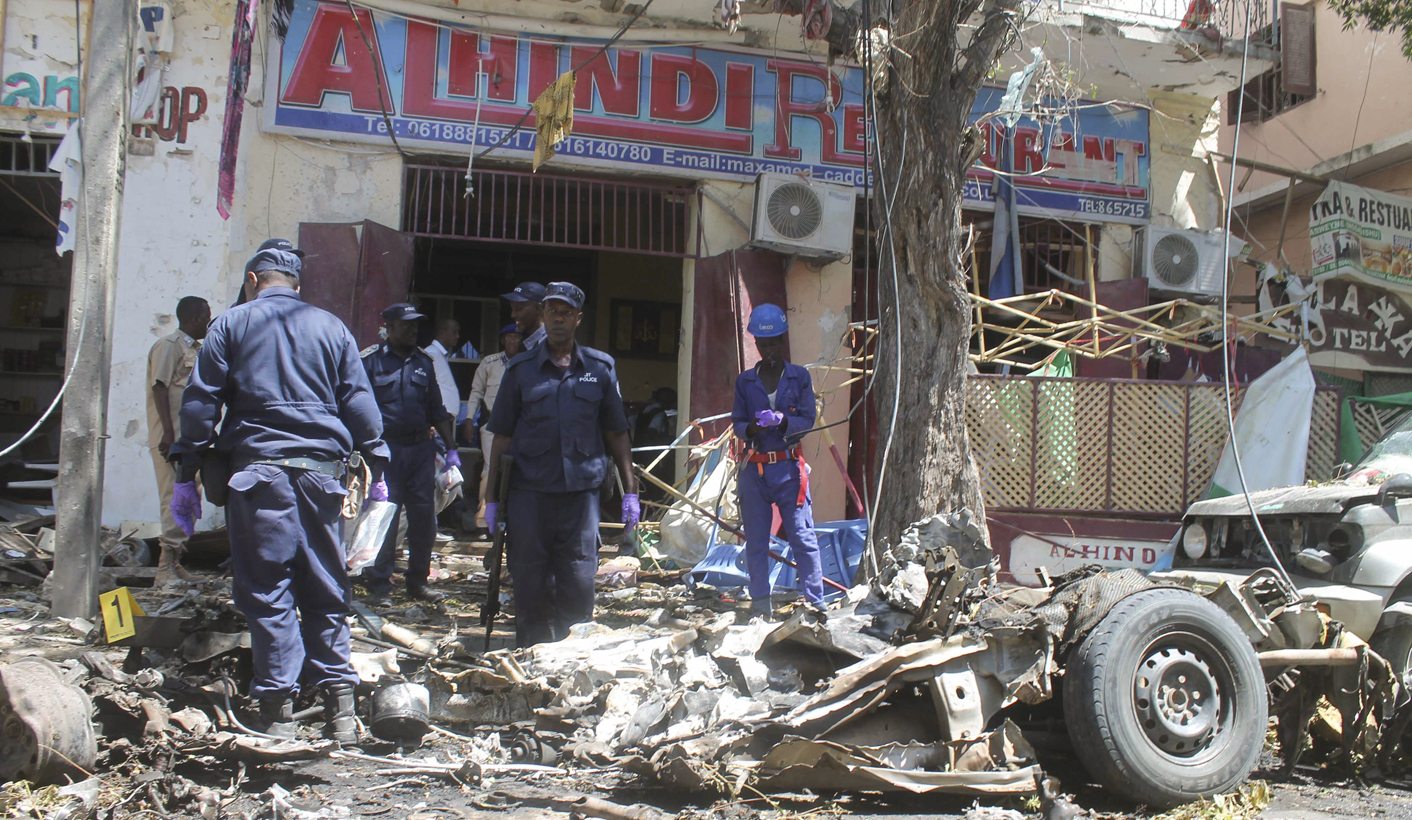 Somalia is the worst place in Africa, and one of the worst places in the world, to be a journalist. On World Press Freedom Day, a new Human Rights Watch report looks at why it is so hard to report from there – and speaks to the people who do it anyway. By SIMON ALLISON.

One night in October 2014, Abdirizak Jama Elmi was outside his home in Mogadishu, greeting a neighbour. A Toyota station wagon pulled out, and a man inside suddenly started shooting. “As I was trying to escape the man started shooting automatic rounds and I felt as though he hit me about 10 times in my back,” Abdiridak said. “I could hear several voices telling the shooter to aim better. I could hear them saying, ‘He is still alive!’”

The veteran journalist, a reporter and bureau chief for the private Somali Channel TV, survived the attack. But his injuries were so severe that he can no longer work as a journalist. While he can’t be entirely sure, Abdirizak thinks the attack was linked to a 2013 interview he did with a woman who claimed she was gang-raped by African Union forces.

Daud Ali Omar and his wife were asleep in their house in Baidoa in the early hours of 30 April 2015. Daud was a reporter, producer and host for the show Fanka iyo Suugaanta, which translates as “Fun and Music”. He had received several threatening text messages from people who claimed links with Al-Shabaab, the radical – and violent – Islamist militant group. They weren’t happy that Daud continued to play music on his show, music which Al-Shabaab has opposed for years. That night, unidentified gunmen entered the property and sprayed it with bullets. Daud, his wife, and their neighbour Ali Gaab were killed.

In May 2015, Al-Shabaab attacked a government checkpoint in Bosaso, the economic hub of the semi-autonomous region of Puntland. They killed two soldiers, injured others, and destroyed two vehicles. A reporter assigned to cover the story approached the police for comment.

“The story is there. When I called the police commissioner to ask if he could confirm that story, he said: ‘Yes, that is the reality, but why do you care, you can’t report it.’ I asked him why, and he said, ‘I told you that no media can report it, if you report it you will pay the price.’ I stopped reporting it, because if I report it I already know what the commissioner will do,” said the reporter.

Near-daily incidents of intimidation, censorship, death threats, attempted assassinations and assassinations make Somalia the most dangerous place in Africa to be a journalist – and probably the most dangerous place in the world to ply that craft. The first-hand accounts related above are just a few of many examples taken from a new Human Rights Watch report into the dangers of reporting in Somalia, put together by researcher Laetitia Bader.

The situation is getting worse, not better. “Media freedom shouldn’t be yet another fatality in Somalia. On top of the long-term threats from Al-Shabaab, the new government is increasing the danger and repression for journalists at the very time when their services are most needed,” said Bader.

One is that the threat to journalists comes from all sides, not just Al-Shabaab. The government is implicated in heavy censorship and intimidation, as are regional administrations, while the attempted assassination of Abdirizak raises awkward questions for the African Union Mission in Somalia. To make things worse, new legislation is designed to make the environment even tougher for journalists, with ambiguous prohibitions – “encouraging tribalism” is forbidden, for example, as is “spreading baseless propaganda” – likely to have a chilling effect on freedom of expression.

Another is that the dangers facing journalists are forcing the profession to become younger, less experienced and ultimately less professional.

“The majority of journalists interviewed by Human Rights Watch were under 25 years of age. This was not deliberate and highlights how young many journalists currently operating in Somalia are. Most had only completed high school, and had only ad-hoc journalism training, if any at all,” said the report. Many more experienced journalists have either left the profession, or left the country: Between 2008 and 2013, at least 70 Somali journalists fled into exile.

So what can be done? Although Human Rights Watch outlines several pages of recommendations, starting with an appeal to the president of Somalia to actively support media freedom, it is hard to see any of the major actors changing their behaviour voluntarily. It’s also unlikely that the international community and donors will push the government too hard.

There could be, however, an important role for foreign media. One Somali journalist, living in exile, noted that he received threats after reporting on Al-Shabaab’s internal power struggles “an issue often discussed by international reporters and observers”. This is a clue that suggests that foreign correspondents can and should use their privileged position and platforms to tell the stories that Somali journalists can’t; and, ultimately, to assist beleaguered Somali journalists in performing their vital watchdog role.

The most striking feature of Bader’s report, however, is the Somali journalists themselves, and their courage in the face of outrageous adversity. They work in an incredibly hostile environment, usually for little to no pay. While others around them are fighting with bullets and bombs, they are fighting with words – and, in doing so, are putting their lives on the line to defend free media and free speech. On World Press Press Freedom Day, their example is an inspiration to us all. DM

Like Fish in Poisonous Waters: Attacks on Media Freedom in Somalia on Human Rights Watch

Photo: Somali police officers inspect the scene of a car bomb attack in Mogadishu, Somalia, 11 April 2016. A suicide bomber exploded a car bomb outside a restaurant in the capital on 11 April, killing at least 5 and wounding several others, according to media reports. Somalia’s Islamist militant group al-Shabab has claimed responsibility for the attack. The latest attack comes just two days after another car bomb explosion killed at least 3 in Mogadishu. EPA/SAID YUSUF WARSAME