Police minister gifts Hawks a R1.4bn nest egg, but will it guarantee independence? 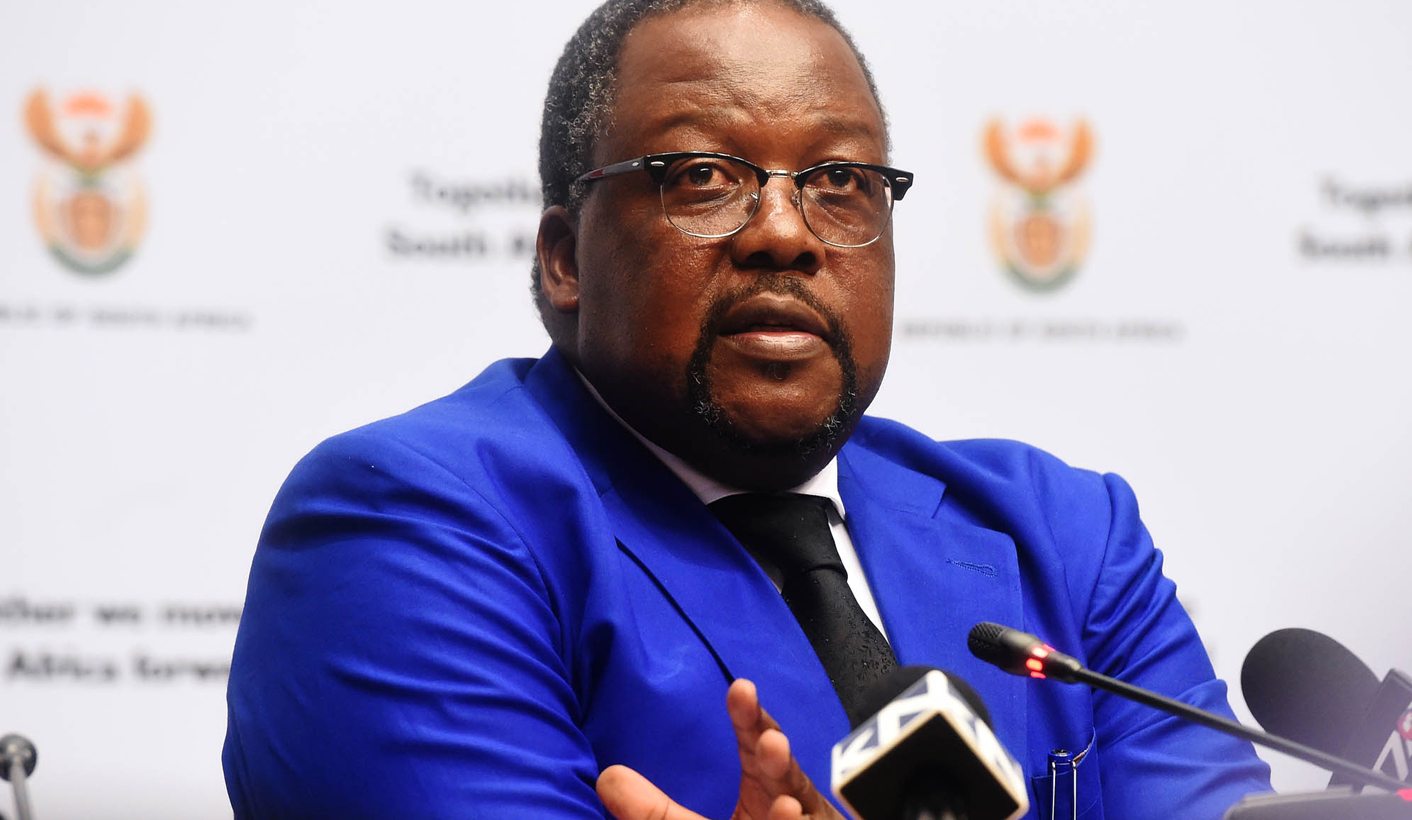 While discredited Hawks head Lieutenant-General Mthandazo Ntlemeza didn’t get the jet or helicopter he asked for, Minister of Police Nathi Nhleko did allocate a cool R1.431-billion to the Directorate for Priority Crime Investigation, also known as the Hawks. While the stash is part of the R80.8-billion allocated to police, it will be disbursed separately by Treasury over two years. This, reckons Nhleko, should fulfil compliance with three Constitutional Court rulings seeking to entrench the unit’s independence. But more than financial independence it is the isolation of the Hawks from political pressure that is critical. By MARIANNE THAMM.

The separate budget for the Hawks, who have been making headlines of late for all the wrong reasons, is more of a sop to three Constitutional Court rulings about the independence of the unit that it should work without fear or favour while headed by someone who is “a fit and proper person, with due regard to his or her experience, conscientiousness and integrity”.

Its current boss, Lieutenant-General Mhandazo Ntlemeza, according Pretoria High Court Judge Elias Matojane, as well as lobby groups the Helen Suzman Foundation (HSF) and Freedom Under Law (FUL), is not this person. The man who currently occupies the top job was found by Judge Matojane in 2015 to be “biased and dishonest”, that he lacked integrity and had lied under oath.

Accordingly, says Johan Burger, senior researcher of Governance, Crime and Justice Division at the Institute for Security Studies, the question we must ask is a simple one: “Can the South African Police Service’s (SAPS) Directorate for Priority Crime Investigations (DPCI), or the Hawks, as they are more popularly known, be trusted to carry out their mandate without fear, favour or prejudice?”

While Ntlemeza might be safe for now, a second court application by the HSF and FUL, that his appointment be reviewed as it is unlawful and was made without due regard to relevant considerations, holds “strong prospects” of success. This is according to Judge Neil Tuchten who on 19 April dismissed an application by HSF and FUL to have Ntlemeza urgently removed from the post.

However, the second application stood a good chance as Minister Nhleko, said Judge Tuchten, in taking an “incorrect” view in brushing aside Judge Matojane’s findings as irrelevant and inconsequential, had “disabled himself from making a rational decision”.

Announcing the special Hawks budget in Parliament last week, Nhleko said it “this should satisfy compliance with the ruling of the Constitutional Court in entrenching the independence of the unit”.

But this is far from reality.

Anywhere in the world, public officials or high-profile politicians who engage in corruption or find themselves in thrall to criminal elements seek to use their influence and power to undermine the law or capture institutions tasked with upholding it. Whether they can be exposed and rooted out depends on the strength of the law as well as the political will to clean, accountable governance.

This was one of the reasons the Scorpions, or the Directorate for Special Operations, established in 2001 and placed within the National Prosecuting Authority to guarantee their independence, were crushed. The Scorpions operated separately from the SAPS and were hugely successful in pursuing several high-profile criminals as well as senior government officials and politicians.

The independence of the Scorpions pitted the elite unit against the SAPS in a bitter battle to protect these high-ranking officials. It is a battle still spooling out today in the country’s courts.

Former police commissioner Jackie Selebi was the biggest fish the Scorpions reeled in and then there is, of course, the ongoing saga of the 783 charges of corruption, fraud, money laundering and racketeering against President Jacob Zuma that loom. The Pretoria High Court will rule on Friday on the DA’s “spy tapes” application for a review of the NPA’s decision to drop the 783 charges.

The Hawks were established after a 2008 Cabinet decision to disband the Scorpions. The Hawks, officially known as the Directorate for Priority Investigations, is an apparently independent unit that now falls under the SAPS.

In the past year the Hawks have made headlines not for their efforts at crime busting but for pursuing of Minister of Finance, Pravin Gordhan, with regard to spurious allegations of a “rogue unit” at SARS. Former SARS Deputy Commissioner Ivan Pillay and strategic planning risk group executive Peter Richer are allegedly being investigated, too.

Ntlemeza has also been implicated in the ongoing attempt to sideline former Hawks KwaZulu-Natal head, Johan Booysen, who was illegally suspended.

The Hawks, under Ntlemeza, are also investigating former prosecutor Gerrie Nel and have brought charges against former head Anwa Dramat, Gauteng head Shadrack Sibiya, former IPID head Robert McBride, as well as former NPA prosecutor Glynnis Breytenbach. Public Protector Thuli Madonsela has publicly claimed that the Hawks are investigating her, a charge they have denied. The unit also arrested forensic investigator Paul O’Sullivan on minor charges under the Citizen’s Act on 1 April. O’Sullivan is investigating several top police officials for corruption and their links to the criminal underworld.

So in reply to Burger’s original question as to whether the Hawks can be trusted, considering the long list of those perceived to be “criminal”, the reply has to be no.

Burger also asks, “How is it possible that after three Constitutional Court judgments (in 2008, 2011 and 2014), aimed at strengthening the Hawks’ autonomy, their independence is still being questioned?”

He cites a minority judgment by Constitutional Court Judge Edwin Cameron in the matter between the HSF and the Minister of Police and Others, on 27 November 2014, summing up the risk for anti-corruption institutions located within government departments.

A 2011 Constitutional Court judgment (Hugh Glenister versus the President of South Africa and Others), led to additional amendments of the SAPS Amendment Act of 2008 (which allowed for the establishment of the Hawks), when the court found sections of the Amendment Act inconsistent with the Constitution. Two key findings emerged from that ruling: that the Constitution imposed an obligation on the state to establish and maintain an independent body to combat corruption and organised crime, and that the Hawks did not meet the constitutional requirement of adequate independence.

“The need for the Hawks to be sufficiently independent to tackle corruption effectively was dealt with exhaustively by all the judges in the three Constitutional Court cases. In the main, the two issues that stand out are the location of the Hawks and the appointment and dismissal of its head,” says Burger.

And herein lies the rub.

“One important attribute to offset the DPCI’s location within the SAPS would be an irreproachable process for the appointment of its members – and that is lacking here,” Burger says.

Section 17 CA of the SAPS Amendment Act, 2012, sets out the requirements for the appointment of the national head and other senior members of the Hawks, including that this head must be “a fit and proper person, with due regard to his or her experience, conscientiousness and integrity”.

In the Constitutional Court matter with regard to President Zuma’s appointment of Menzi Simelane as National Director of Public prosecutions, the court found that this appointment had been “irrational”.

Simelane had lied under oath at the 2007 Ginwala Commission of Inquiry and in 2012 Judge Zak Yacoob found, “It does not matter for the purposes of evaluation of credibility whether a person is dishonest and devious to a court, to a commission of enquiry, to an employer or to anyone else for that matter. Dishonesty is dishonesty wherever it occurs. And it is much worse when the person who had been dishonest is a senior government employee who gave evidence under oath.”

Ntelemeza has been ruled by a judge of the High Court to have lied under oath, and more.

And while Burger says that a finding in the HSF and FUL application to have Ntelemeza’s appointment reviewed may also go against the minister, it left intact the process provided for by section 17CA of the SAPS Amendment Act. This may and probably will simply lead to another “political appointment”.

Judge Cameron in his minority judgment said that consolidating the powers to appoint the Head in the Minister and Cabinet eroded the DPCI’s independence to “a constitutionally impermissible degree” and that he would confirm the High Court’s order declaring section 17CA constitutionally invalid.

There are calls now to amend the law to enable a transparent and accountable appointment to this position, similar to the recommendation for the appointment of the SAPS National Commissioner as set out in the National Development Plan.

Burger said that someone found to be dishonest in a High Court judgment could be appointed to head the Hawks “speaks volumes about the profound lack of commitment by the current political elite to ensure that South Africa has the investigative capacity needed to tackle high-level corruption”.

So, while Minister Nhleko might throw a fat wad of money at the problem, it is not going to go away – at least not while there are senior leaders who might sleep fitfully, disturbed by the possibility of finding themselves in one of the hell holes we call correctional facilities in South Africa. DM