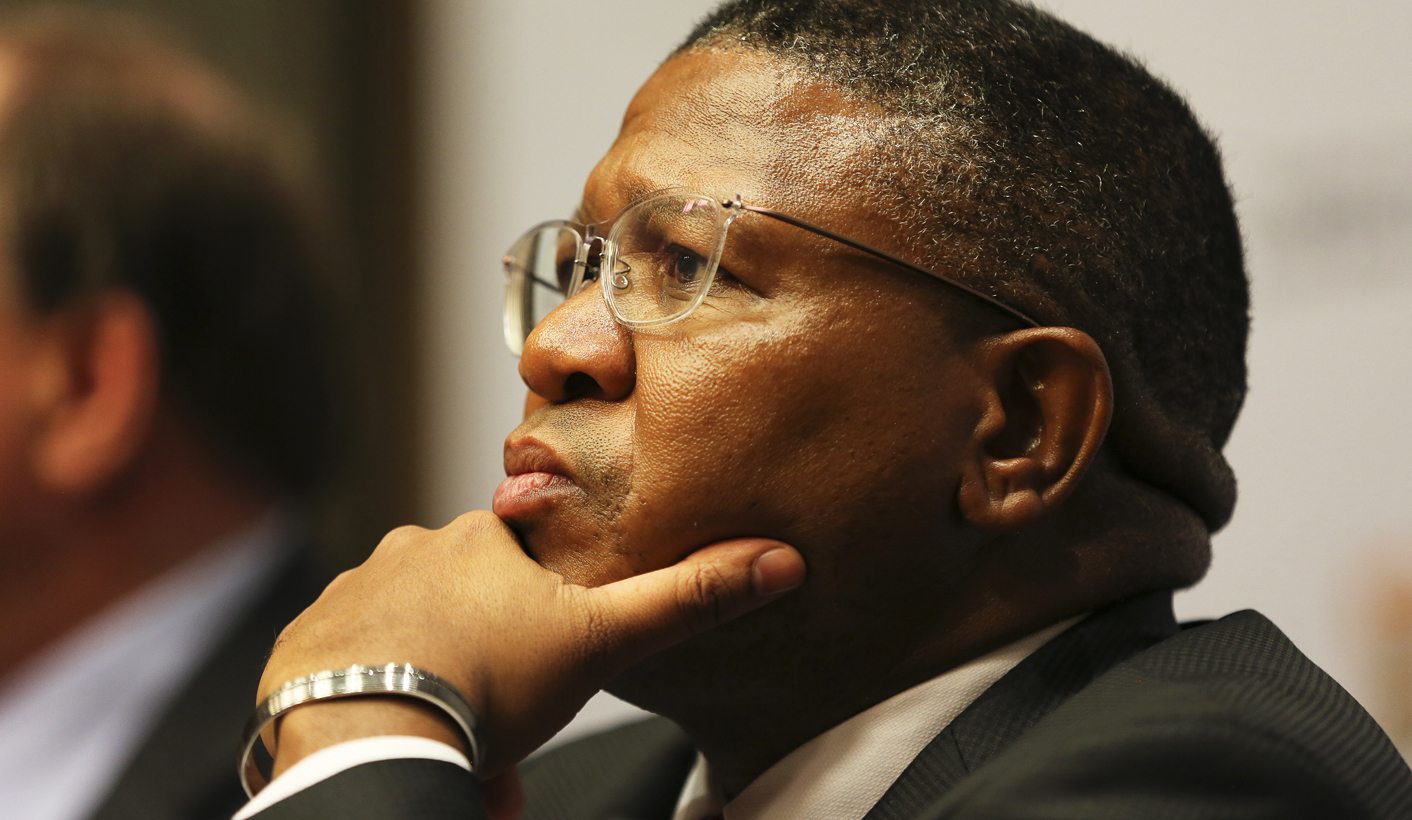 If one ever wants a demonstration of how little our society has transformed since 1994, one only need look at our national rugby and cricket teams. It is so obvious that they are white-dominated – that it is easier for white people to reach the top in those fields only because of our history – that you would have to be one-eyed not to see it. Now, Sports Minister Fikile Mbalula has decided enough is enough, and he is going to act. He has decided to withdraw the rights of our rugby, cricket, athletics and netball bodies to bid to host international tournaments here. This act demonstrates that this issue of sports transformation is not so much about demographics as it is about legitimacy. And some sports, particularly rugby, only have themselves to blame for squandering it away. By STEPHEN GROOTES.

Fikile Mbalula is apparently in a combative mood. Fresh from having to explain how his Twitter account had been “hacked” and forced to deny that a certain private body part was his, he clearly believes he still has political capital/legitimacy.

So, on Monday he announced that as a result of the failure of various sporting bodies to actually transform, to actually have more black players in their national teams, “I have therefore resolved to revoke the privilege of Athletics South Africa (ASA), Cricket South Africa (CSA), Netball South Africa (NSA) and South African Rugby (Saru) to host and bid for major and mega international tournaments in the Republic of South Africa as a consequence of the aforementioned federation not meeting their own set transformation targets, with immediate effect. I will review this decision when considering the results of the 2016/2017 Transformation Barometer.”

This is exactly the kind of announcement that is going to have older, unreconstructed rugby fans baying for blood. There’ll be talk about how this is an abuse of their human rights, about how no one can force transformation, about how quotas don’t work, and about how people need to play believing they have been picked on merit. There will be dark muttering at the Pretoria Bar about whether it is in fact legal. All of which will miss the point: It’s not so much about demography and representing the country, it’s about legitimacy. And these sports have lost their legitimacy.

In 1995 the Springboks, gloriously, won the Rugby World Cup at Ellis Park. The team at the time was composed of white players, with one coloured player in Chester Williams. Despite that, the team had legitimacy for two major reasons. The first was that everyone understood it was unlikely that there were any world-class black rugby players available for selection for the Springboks (although we shouldn’t forget that Errol Tobias had played for the Boks in 1981). But the second reason was more important. Nelson Mandela was able, through shear force of his personality, to give the team legitimacy. Without him, it would never have worked.

In 2007 the Boks won the World Cup again, this time in France. There the ANC/Government decided early on to support them as much as possible, and, of course, they won. This made a huge difference. It also meant a president, in Thabo Mbeki, eager for success of any kind to rub off on him, made the trip for the final, and was ecstatic to be hoisted aloft by the team afterwards. Even the Cabinet ministers were all decked out in the Springbok jerseys for their next meeting.

Cricket has also had an easier ride than rugby, mainly because it’s managed itself better. One of the reasons it’s been less controversial is that cricket’s development system simply started so much earlier than rugby’s. Thousands, possibly millions, of black people played Bakers mini-cricket at school from the early 1990s. Makhaya Ntini was a hero anyone could look up to. And, crucially, it had never been as short-sighted as rugby when it came to TV rights. Rugby had gone for the Murdoch millions in the 1990s when the unlamented Louis Luyt basically sold the rights to M-Net, as it was then, and then DStv. Cricket made sure, where it could, that international games were always free-to-air on the SABC. That made the team more the people’s team than rugby has ever been.

Rugby is now paying the political cost of its financial decision. And when you field a team with hardly any black or coloured players, and then lose to Japan, you are going to find yourself without legitimacy.

There will be many who say that Mbalula is being counterproductive with this decision. But we have to ask what other options he actually has. He can’t ban teams from representing the country, that would be disastrous. He can’t really legislate transformation either – several international sporting bodies claim to impose instant bans if government interferes with sporting teams. And to remove any government funding would hurt the very people he’s trying to help.

Some people are going to claim that he should rather keep prodding with words, rather than stinging with action. But, bluntly, if the Springboks are still as untransformed as they are now more than 20 years after Madiba saved them, then there’s no hope for rugby administration. But if you lose to Japan, you’re clearly hopeless anyway. Someone has to actually do something. And the administrators would know how much a decision like this could sting them where it really hurts. In their pockets. Losing out on international tournaments means lean years for those who run these sporting bodies.

And this is only a temporary “ban”. It will only last for a year. That is probably better than saying that the ban would be imposed until the targets had all been met, because that could lead to targets being met in the short term, then howls of outrage whenever a black player is chosen (because it will be claimed they’re only in the side to ensure we can host a certain tournament), and then the target to be missed again afterwards. It would be difficult to impose the ban after it’s already been announced that a tournament was coming here.

In a way, then, Mbalula’s move is actually just a simple prod. A reminder that government, and Mbalula, do have some powers here, and are willing to use them. It is also quite a calibrated response. It’s unlikely that any of these sports will really be damaged in any meaningful way.

That doesn’t mean this will be accepted by everybody. But if someone does take it to court (and Mbalula has been careful to include several sports together so no one can claim he’s targeting rugby), his response will surely be to say that if he doesn’t do this, transformation will never happen. The evidence so far will back him.

For the fans, this is a disappointment, but they should also see it positively. With rugby in particular, it should finally convince the men in suits, and the coaches in tracksuits, to implement change. Which means that fans, like this writer, will no longer have that uncomfortable guilty feeling for backing the Boks. DM