Mbalula’s ban: A radical wake-up call with a short-sighted solution 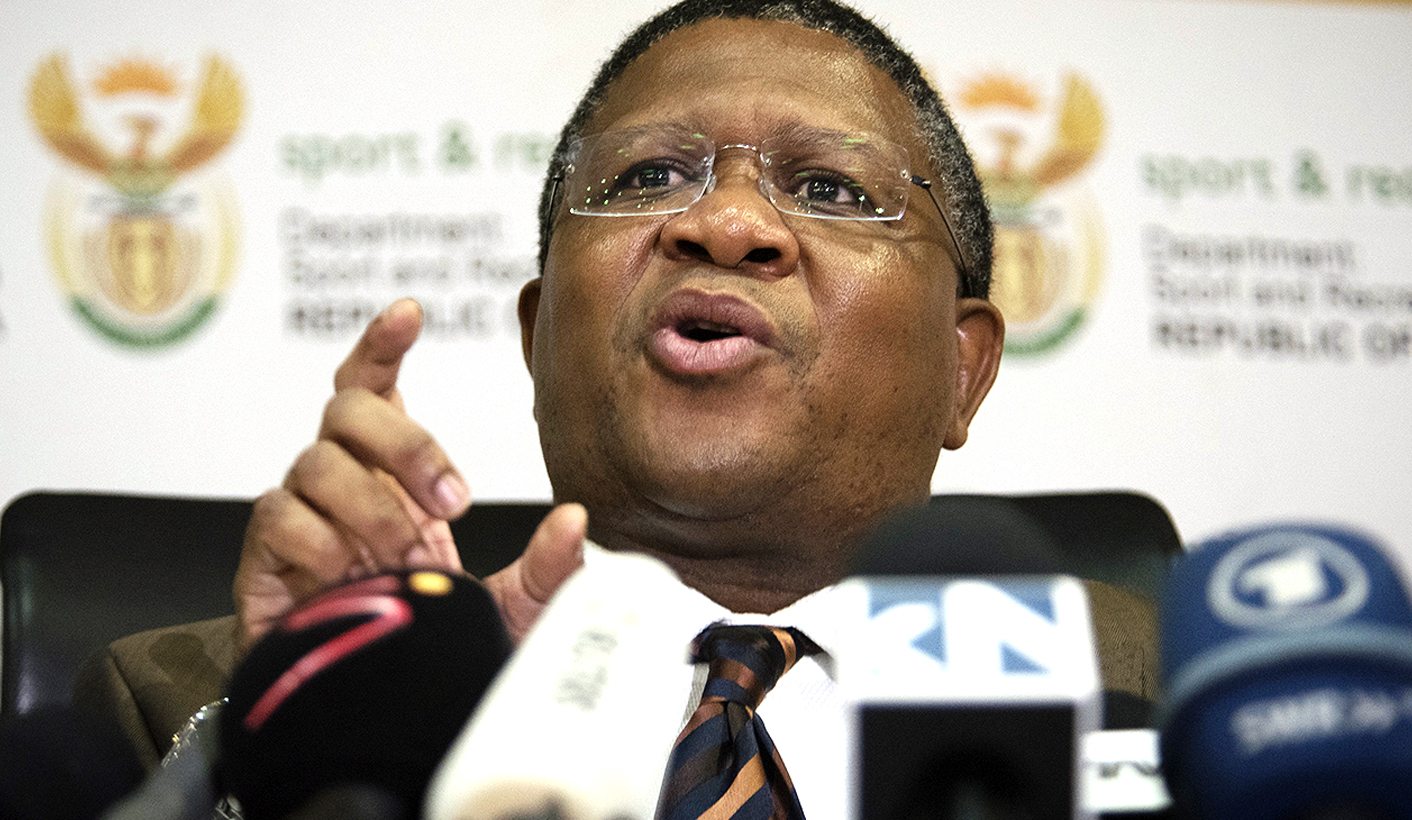 Fikile Mbalula’s radical action to ban four of South Africa’s sporting federations from hosting or bidding for international events after failing to meet their targets might be a wake-up call, but unless holistic action is taken, it will remain nothing but a plaster over a gaping wound. By ANTOINETTE MULLER.

Speaking during the release of the Eminent Persons Group on Transformation in Sport in Pretoria, Mbalula said:

“I have resolved to revoke the privilege of Athletics South Africa (ASA), Cricket South Africa (CSA), Netball South Africa (NSA) and South African Rugby (Saru) to host and bid for major and mega international tournaments in the Republic of South Africa as a consequence of the aforementioned federations not meeting their own set transformation targets, with immediate effect,” Mbalula said on Monday.

“I will review this decision when considering the results of the 2016/2017 Transformation Barometer.”

The current transformation target of national teams is to be 60% generic black (black African, Indian and coloured), and in the context of transformation, the numbers from the report make for pretty grim reading.

A number of sporting codes – including rowing, hockey and swimming – are being dominated by white participants. At senior national team all of these codes were made up out of 80% or athletes. Rugby was at 58% with athletics at 50% and cricket at 45%, but only the four above-mentioned sporting codes got the ban.

Mbalula did not clarify why the immediate targets and the targets for the next World Cups were different. Both rugby and cricket have committed to a target of 50% representation during the 2019 World Cups, but the targets set out in this report are different, hence the ban.

The announcement has caused much consternation, but there are two sides to this coin. First, for many, transformation has become a loaded word which, for some, is somehow synonymous with “weaker”. That kind of thinking is a farce and has no place in a democratic and equal society. Transformation simply means a “bigger pool of talent”. It also means giving players a deserved opportunity.

Think back to the 2015 Cricket World Cup where Aaron Phangiso did not play a single game – not even against the United Arab Emirates – despite being part of the squad. Or Francois Hougaard saying that he was “embarrassed” to be playing at wing ahead of Lwazi Mvovo when Hougaard actually wanted to play as a scrumhalf. Transformation means shaking up the status quo, and nobody can deny that an element of elitism still exists in African sport at level to this day.

The country’s top sportspeople come from a handful of schools and considering the gross inequality that persists in South Africa, very few have access to those schools. And therein lies the kicker. The 2015 SA Schools Rugby team of 25 had just three black Africans in the squad of 26. Two of those players came from Jeppe High while the other came from Grey – all traditional rugby stronghold schools. While some might argue that there is an element of institutional racism that is contributing to this, you only need to spend a morning on the side of a junior rugby field of an elite rugby school to see that the numbers simply do not stack up.

Somewhat ironically, despite all his guff, Mbalula actually touched on that pertinent point directly by saying: “It is the right thing to do, considering the grave injustices of the past, but there is also the reality that 84% of the country’s under-18 population is black African. To ignore this from a sustainability perspective alone will be suicidal.”

But this also underscores how Mbalula – and a big group of South Africa’s sporting federations – have absolved themselves of getting into the coalface of transformation: grassroots development.

The lack of equal access to resources and opportunities remains a big challenge. Saru the excuse that they cannot develop talent if they do not have buy-in from the schools, but a number of programmes work successfully in underprivileged areas without the buy-in from schools. These federations – and the sport and recreation department – often parade around numbers which are not conducive to much more than mass participation and serve no purpose other than simply being a smokescreen for their failures.

Equal access to resources and opportunities mean that a player from a disadvantaged background needs to be brought on equal footing with a player “born into privilege”. It means that the player who is disadvantaged needs to be given the same coaching, nutrition, kit and playing opportunities than his more privileged brethren. Once that happens, it will be impossible to ignore the black talent bashing down the door for their shot in the national team and it will only increase South Africa’s sporting prowess as more talented players mean being even more competitive on the international stage.

But these are long-term goals and the structures which create this excellence should have been established years ago while smokescreen number-parades were used as convenient excuses by the elites.

There is enough black talent – or generic black and black if you want to use a government term – to have fully transformed national rugby teams by 2023, but unearthing that potential and fostering the current potential will require a radical from administrators. action of banning the hosting and bidding for of international events is not going to suddenly compel elitist administrators to sit around singing Kumbaya and snap their fingers to undo 300 years of oppression.

The glacial pace of transformation deserves every ounce of criticism it gets, but now that we are finally having that conversation, it is important to be realistic on mapping out a way forward.

The lack of numbers at level are translating directly to level. Just a few weekends ago, just 20 out of the 75 players who started in Super Rugby were black. Of those players, 70 percent played in just three positions – eight wingers, three loosehead props and three centres. These numbers speak for themselves, but they are worth considering when discussing why a blanket ban on hosting or bidding for international sporting events might be a case of “cut off your nose to spite your own face”.

The ministry says that the policy only applies to “new events” which should mean that the South African leg of the World Series Sevens and the African Athletics Champions South Africa is due to host in June are all safe. It does, however, spell serious trouble for the South African leg of the Sevens tournament and for the possibility of hosting the 2023 Rugby World Cup. The deadline for unions to confirm their intent to tender a bid is June 2016 which, under Mbalula’s ban, means that South Africa cannot bid.

While we should be cautious to not get too sensitive about not being able to host elite sporting events when, at its core, sport remains elitist, we cannot overlook the advantages that hosting global events such as the Rugby World Cup might have, if, of course, engagement is structured properly and the elite administration is given a boot up the backside.

Let’s ignore for a moment the potential economic impact the hosting of such a sporting event could have and focus on what it could mean in terms of creating a legacy. If grassroots development is holistically engaged, the legacy of such a tournament could be massive. Having games on free-to-air TV and having open-air screenings in marginalised and often ignored communities could do wonders for creating a whole new generation of fans, especially if those fans can identify with people who look like them in the national team. That utopian dream might just be too much hard work for the powers that be. DM