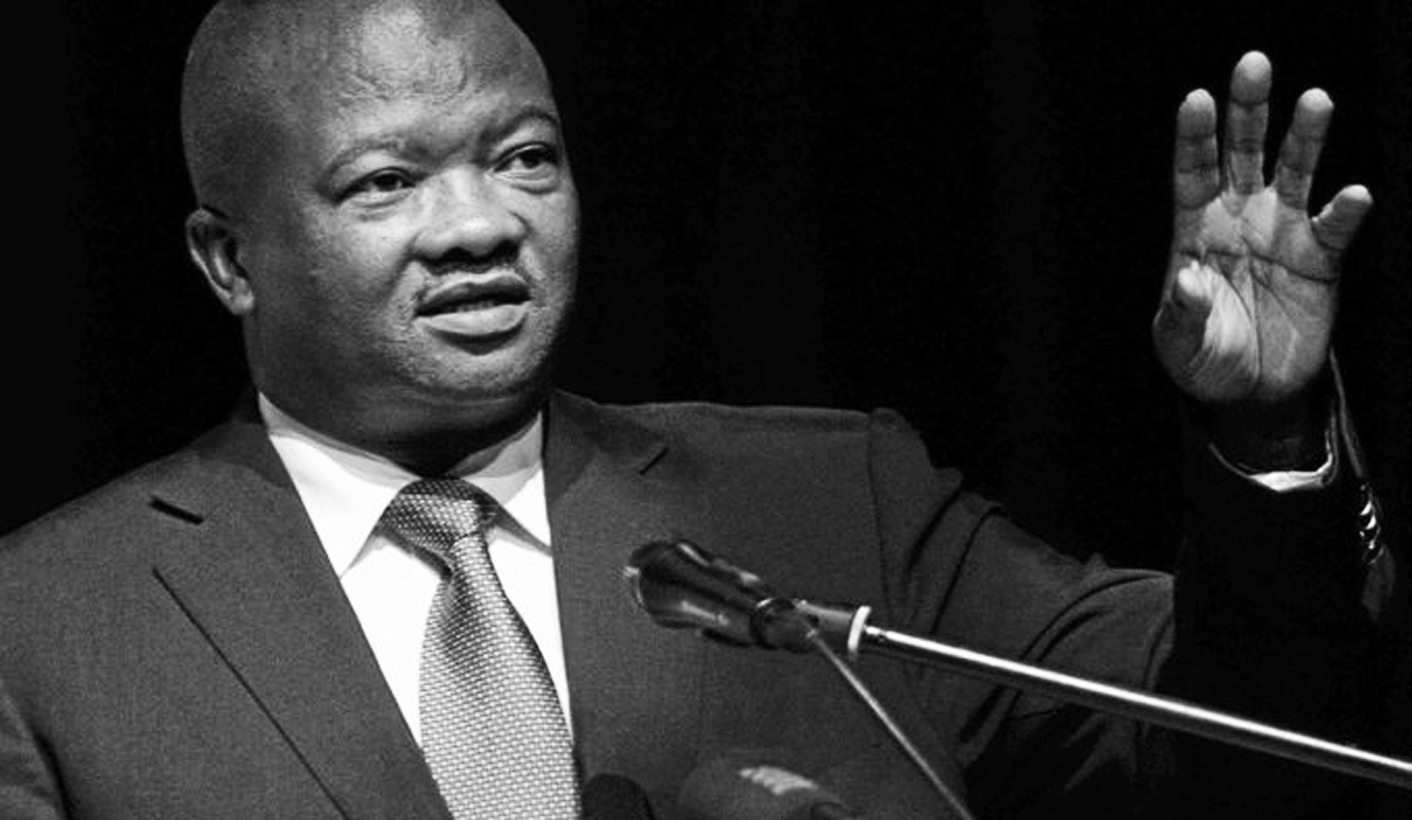 United Democratic Movement (UDM) leader Bantu Holomisa is hitting the road to mobilise support for the local government elections. With the launch of the party’s “Community First” manifesto at the Pretoria Showgrounds on Sunday done and dusted, it’s on to the Eastern Cape this week. And then other provinces will follow – the party is doing thing differently with a series of provincial launches of their municipal manifesto, although the final itinerary is still being finalised. By MARIANNE MERTEN.

The politician many call “General” says this local government election is different; that the gatvol factor has opened political space.

“Right now it is time to consolidate… There are acres and acres of space, given the ANC’s philosophy of putting the party before the country is failing,” Holomisa told Daily Maverick on Monday. “People credit the UDM for being consistent and telling it how it is. We don’t have any baggage… People are listening to the UDM.”

Increasing the numbers of its councillors is the focus; looking at regaining control in the Eastern Cape’s King Sabata Dalindyebo municipality, held until the 2006 municipal poll, seems a feasible consideration. The UDM received an important boost in Nelson Mandela Bay in August 2015, when it won the heavily contested by-election in Ward 30 (Veeplaas and KwaMagxaki) where ANC struggle veteran Govan Mbeki and others are buried. The UDM took the ward with 49% of the vote, up from the 1.2% it scored in the 2011 poll. It was its first councillor in the metro, although the party has 55 councillors elsewhere in the province.

And so Holomisa is upbeat, although he’s miffed smaller parties like his own – four MPs and four Eastern Cape MPLs – don’t get as much money as the ANC and DA from the Represented Political Parties Fund, the allocations from state coffers based on the number of provincial and national elected public representatives. It’s R1.35-million for the UDM, R72.1-million for the ANC and R26.3-million for the DA, according to the 2014/14 annual report of the fund. Getting the funding formula changed has been his bugbear for years.

“The politics of South African elections are getting too expensive,” he said, adding both the ANC and DA, which is in charge of the Western Cape, have access to resources through their government-based network.

That’s the point about Holomisa; he doesn’t mince his words when something crosses his principles or the country’s interests.

“It is important to the country that people who led the struggle… are now the very same people who are looting the resources of the country, while people are sharing their lives with rats in Alexandra and other townships,” he says. “I don’t just shout at anything that moves. I always identify a problem and offer a solution…”

And the ANC listens politely, even if it doesn’t act on proposals like Holomisa’s repeated call since last year for a negotiated “dignified exit” for President Jacob Zuma in the wake of the Nkandla and other scandals. Ditto the UDM’s long-standing proposal to have South Africa’s president elected directly, and the call for an economic indaba to sort out South Africa’s economic troubles, similar to the Convention for a Democratic South Africa (Codesa), which negotiated the democratic transition in 1994.

But Holomisa picks his battles. And so he successfully raised with the public protector issues of fraud and corruption in how the Electoral Commission of South Africa (IEC) acquired its new head office. That public protector probe found mismanagement and conflicts of interest – subject of a parliamentary ad hoc committee – and was backed by a subsequent independent forensic audit. Ultimately IEC chairwoman Pansy Tlakula resigned in late 2014.

In Parliament, while acerbic verbal barbs are traded across the floor with the DA, this does not happen when Holomisa speaks, the party’s young (age-wise) Nqabayomi Kwankwa or the UDM’s other two MPs, Mncedisi Filtane and Cynthia Majeke. Holomisa said the ANC knows he takes “a non-partisan approach”.

In some ways it’s a complicated relationship. Holomisa has always been close to Nelson Mandela, even after he formed the UDM. He says Mandela would invite him to his house and tell everyone that ANC and UDM politics should be left at the door. As a longstanding family friend of the Mandelas, and close to Mandela himself, Holomisa was central to preparations for and at the December 2013 state funeral at the former state president’s Qunu home. In 2009 when soldiers marched to the Union Buildings in protest over their working conditions, Holomisa was called in to be part of a team dealing with this. He serves as deputy chairman of the Defence Service Commission.

Those with institutional memories remember the role played by Holomisa as head of the Transkei military council in allowing ANC and Pan-Africanist Congress (PAC) to set up bases in that bantustan. On 30 December 1987 the Transkei defence force officer had led a coup to depose then Transkei prime minister Stella Sigcau.

In the first democratic Cabinet, Holomisa was deputy environmental affairs minister while Sigcau held the public enterprises portfolio. It unravelled when Holomisa told the Truth and Reconciliation Commission (TRC) in May 1996 of the “historical knowledge” that Sigcau accepted a cut of a bribe offered in return for gambling rights. The ANC instituted disciplinary proceedings, and Mandela sacked him in July 1996. “I’m happy with one thing. I leave the office without scandal hanging over me, without at any stage having been told by my superiors that I failed to perform my duties,” Holomisa told the South African Press Association (Sapa) at the time.

It was about principles. He had been asked by senior ANC leaders to apologise, but refused and was expelled from the ANC in September 1996, about two years after topping the party’s list at the ANC’s 1994 Bloemfontein national conference. The ANC in a statement characterised Holomisa’s TRC testimony as typical of his “political style – palace political intrigue, military council scheming, in which you store up ‘information’ against comrades as an ‘insurance’ to be disclosed at the appropriate moment”.

In 1997 Holomisa formed what could be described as the first splinter from the ANC with Roelf Meyer, the National Party’s lead constitutional negotiator. Despite heavy politicking that turned violent and created no-go zones – KwaZulu-Natal UDM leader Sifiso Nkabinde was killed about five months before the 1999 elections – the party gained 14 seats in the National Assembly, and seats in six provincial legislatures.

Meyer retired from politics in 2000, and pretty much the whole UDM parliamentary caucus defected to the ANC during the 2003 floor-crossing period. Holomisa had taken the matter to the Constitutional Court a year earlier, but the court ruled floor-crossing permissible at municipal level, and gave Parliament time to enact a constitutional amendment to allow it at national and provincial level. Triggered by a political toenadering between the ANC and the New National Party, which wanted out of the DA, floor-crossing stayed in place until January 2009 when another constitutional amendment removed it. Since the 2004 elections, there have been four UDM MPs in Parliament, although its fortunes in municipalities seem to be turning since the 2014 elections which showed an increase in votes for the party.

Whether that trend will be borne out in the heavily contested 3 August local government elections remains to be seen. The point about the UDM hosting a series of provincial local government election manifesto launches is tailoring the message to the differing circumstances. So on Sunday it was about cleaning up Johannesburg, and Gauteng’s derelict buildings generally, by enforcing responsible property ownership, homelessness, joblessness and one council’s approval of “millions of rands to be spent on a mayoral soccer extravaganza whilst they owe millions of rands for electricity and water”, as Holomisa told party-faithfuls.

There are overarching themes. And anti-corruption is central: “Some of us who have an institutional memory of where we’re from… we have reason to say: ‘Let’s pause’,” he says. But so are better services, responsive councillors and job creation through creative schemes like community involvement in cleaning and maintaining the Jukskei River and by clamping down on imports. “We are too liberal, too lenient (compared with our neighbours). Everybody just dumps goods in South Africa… If we are serious about job creation we need to tighten the screws a little.”

Holomisa, who turned 60 last July, is willing to put in the work. “It’s too early to retire… I will say the life of politicians starts at 60,” he laughs. DM