Oscar Pistorius: New look at evidence suggests bat might have been a weapon 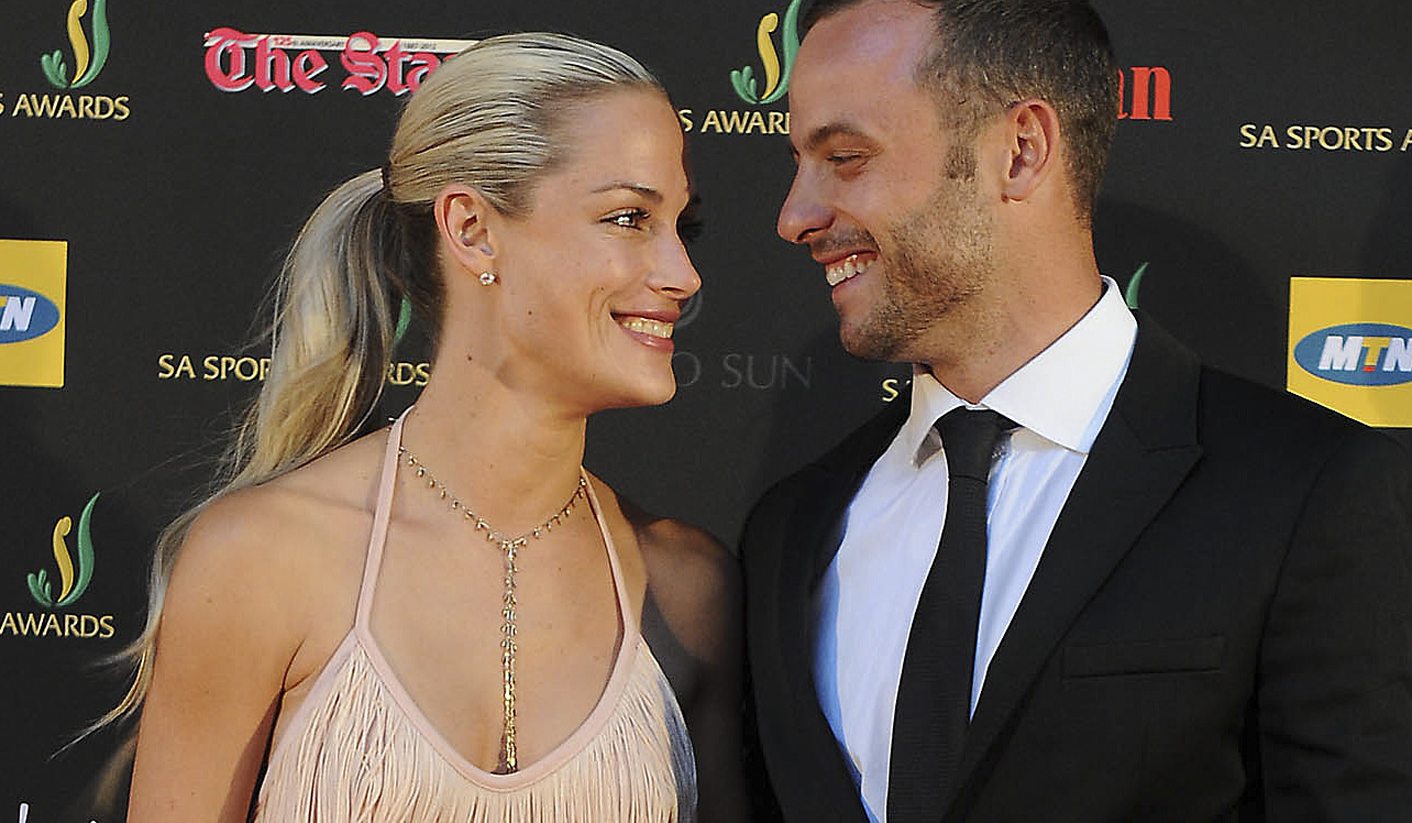 On Monday, Oscar Pistorius learnt that he will know his fate in June, when the court deliberates during a fresh sentencing hearing on charges of murder. Meanwhile, a new book by amateur forensic sleuths sheds new light on the evidence, suggesting that Reeva Steenkamp had sustained several injuries before she locked herself in the toilet of Pistorius’s Silver Woods estate on 14 February 2013. By MARIANNE THAMM.

All illustrations by book authors.

Millions of people across the globe tuned into the live television and internet broadcasts of the trial of former six-time Paralympic gold medallist Oscar Pistorius, a.k.a. the Blade Runner, as it took place over 43 dramatic days in the Pretoria High Court in 2014.

At the start of the proceedings Pistorius had pleaded not guilty to all charges including the “wilful and intentional murder of Reeva Steenkamp”. His defence was that he had mistaken Reeva for an intruder when he pumped four hollow-point bullets through the toilet door in the early hours of the morning of Valentine’s Day, wounding her fatally.

For over a month, as a series of witnesses testified and state prosecutor Gerrie Nel and Pistorius’s defence advocate Barry Roux became household names, those following the trial closely obsessed over its details. Who moved the fans? Why would Reeva lock the door to the toilet and take her cellphone with her? Why didn’t she call out to Oscar from behind the door? Did Oscar “scream like a woman” or was it Reeva pleading for her life?

The trial not only exposed the South African criminal justice system to the world but also created, in an instant, an army of citizen forensic and legal experts who pondered and debated the meaning of Dolus Eventualis.

In December 2015 the Supreme Court of appeal set aside Judge Thokozile Masipa’s original verdict of culpable homicide and the finding that Pistorius could not have foreseen Steenkamp’s death, and ruled instead that the Paralympic star is indeed guilty of murder by Dolus Eventualis.

While Pistorius was serving 10 months of his original five-year sentence at the Kgosi Mampuru II Prison in Pretoria, brothers Calvin and Thomas Mollett were poring over crime scene photographs, autopsy reports and other material related to Steenkamp’s murder. The brothers have previously published two books, Bloody Lies and Bloody Lies Too, challenging the evidence presented in the sensational murder trial of Fred van der Vyver, accused and acquitted of the gruesome murder of 22-year-old Stellenbosch student, Inge Lotz, in 2005.

Since then Thomas, who lives in Piketberg (Calvin, an engineer, lives in Canada), has presented lectures to the Division for Forensic Medicine at UCT as well as in other public forums. The brothers have attracted both opprobrium from some experts, piqued that they have dared to enter their territory, and praise from others who say their meticulous unpicking of evidence provides valuable forensic lessons.

The Molletts have just published their third book, Oscar vs The Truth (Piquet Publishers) and have drawn several shocking conclusions in relation to Reeva’s murder, including that two oval abrasions that were found on her back appeared to match the corner of the Lazer bat Pistorius said he had used to bash down the door after shooting.

This would suggest, say the brothers, that Reeva sustained this injury, as well as other bruises on her body that were overlooked or unexplained in the pathologist’s report and testimony, during a heated, life-and-death struggle that took place in Pistorius’s house before Reeva sought refuge from a raging Pistorius by locking herself in the bathroom.

In their introduction, the Molletts write, “In this book we look very carefully at Oscar’s version by examining the crime-scene photographs, relevant reports and the testimony of various witnesses in order to answer one question: Did Oscar know Reeva was behind the door?”

The brothers return to crucial evidence they say was overlooked and poorly handled in the case.

“One gets the impression that police arrived on the scene and thought they had an open-and-shut case against Oscar. They knew he pulled the trigger, and had statements from the neighbours who heard a woman scream – why bother doing a proper forensic investigation.”

The authors charge that instead of securing the crime scene, police had removed a vital piece of evidence – the door – “and stuffed it in a body bag that was too small. In the process, they contaminated the evidence with marks that weren’t there before.” Over and above this, someone had stepped on one of the door’s panels.

Police had also failed to secure other vital pieces of evidence including a steel plate in the bathroom which had been dented (apparently by a bat) as well as noting damage to the door of Oscar’s bedroom.

“Love him or hate him, few can argue with the fact that Gerrie Nel is a formidable cross-examiner,” write the Molletts, “but he was seriously let down by poor forensic work, probably the worst we’ll see in a very long time. And just as the Lotz case was lost on the autopsy table when Dr Rachel Adendorff recorded two vital wound measurements incorrectly, so too in the Pistorius case when Gert Saayman performed a superficial and inadequate autopsy and was way too cautious, vague and full of guesswork on the stand.”

Saayman, claim the Molletts, did not treat the body as a crime scene as a forensic pathologist should do.

“Reeva did not die of natural causes and, over and above determining the cause of death, Saayman was also required to determine (as far as he could) the manner of death.”

While performing the autopsy Saayman had noted that Reeva’s right nipple had been “freshly abraded” but had done nothing more at the time apart from reverting back to photographs to find that skin stripping did occur.

“While viewing them in isolation and without taking into account the quantity, distribution and position of all the wounds in totality, he trivialised bruises on Reeva’s shin.”

The brothers also charge that Saayman did not do enough to describe and explain the wounds on Reeva’s back – including noting the direction of the striations (ridges) and the presence of a substance on the bottom wound.

The pathologist then “stood idly by while Nel argued them as a result of a deflected bullet. This is not good enough. One wonders what Judge Mapisa would have thought if she saw Reeva’s glowing red and visibly abraded right nipple. Was Mapisa ever shown the extent of Reeva’s injuries? Our opinion is that this area of evidence was not adequately explored in court.”

The Judge was also put at a disadvantage by not visiting the scene of the crime, say the brothers.

“Had she done so, she would have seen for herself how close the Stipps were to the bathroom window and how likely it was they would have heard Reeva scream.”

The brothers also point out that while lawyers argued for four days about whether Oscar had been on his stumps when he had bashed down the door, they had not asked “one simple question; if Oscar moved around on his prostheses on the bloodied bathroom floor, where are the footprints? Why did they not investigate the rather obvious drag marks on the floor to check whether they matched either one of Oscar’s stump ends? Exactly how difficult would this have been to do?”

Scrutinising the bat that Pistorius said he had used to bash down the door after he had realised that Reeva was in the bathroom, the brothers found not only that the tip of the bat matched the two wounds on Reeva’s back (which forensics expert Roger Dixon said had been caused by the magazine rack) but that the rubber on the handle had been torn and stretched, suggesting it had been used for more than the three of four blows to the door.

“Is this how the rubber would have looked after only four blows, hard blows as they might have been? Or were there other blows and action with the bat as well? Was there some pulling and twisting on the rubber while one person tried to take the bat from another?” the brothers ask beneath a photograph of the bat.

Their own tests on a similar bat showed no signs of damage “after more than 20 blows with it. This damage [on Oscar’s bat] was caused by some very robust handling of the bat,” they suggest.

“The argument didn’t just take place in the bedroom but elsewhere in the house as well. This is the argument that Estelle van der Merwe heard starting around 1:56. Van der Merwe said she couldn’t hear the words or language, but judging from the ‘movement’ in the tone of the voice she was confident it came from a woman. It sounded like the woman was arguing with someone – although she couldn’t hear a second voice. The female voice was quiet for periods ranging from five to 20 minutes, and lasted for about an hour.”

Around 3am, say the brothers, “Reeva started fearing for her personal safety and locked herself in the toilet. Oscar went after her with a cricket bat – infuriated that she locked herself away from him – and to scare and frighten her, he hit the door with the cricket bat about 2-3 times and also hit the steel plate against the bathtub wall. The time was about 3.14.”

The grazes on Reeva’s back were sustained, according to this version, by the same bat as she fled from Pistorius, seeking refuge in the toilet.

Reeva Steenkamp died a short while later, in the bathroom and not at the foot of the stairs after Oscar had carried her there in his arms, say the Molletts. She died shortly after four bullets ripped through the toilet door hitting Reeva in the hip, head and arm.

Oscar vs The Truth runs at about 208 pages filled with detailed and technical explanations of blood splatter, how long it would have taken Reeva to bleed to death, the trajectory of the bullet as well as every other aspect or evidence the Molletts were able to examine and that they found to have been overlooked by the SAPS forensic team.

Oscar Pistorius now faces a 15-year jail sentence for the murder of Reeva Steenkamp. He is the only person who knows the full truth of what happened that night. But he is not the only keeper of this truth. The data and evidence of how the night unfolded also hold its own “objective” truths. And weighing all of this, the Molletts finally answer the question they ask at the start of their book. Did Oscar know that it was Reeva specifically who was behind the door? In their opinion, the finding has to be “Yes”. DM