The People’s Assembly: Finding a common voice to tackle Zuma 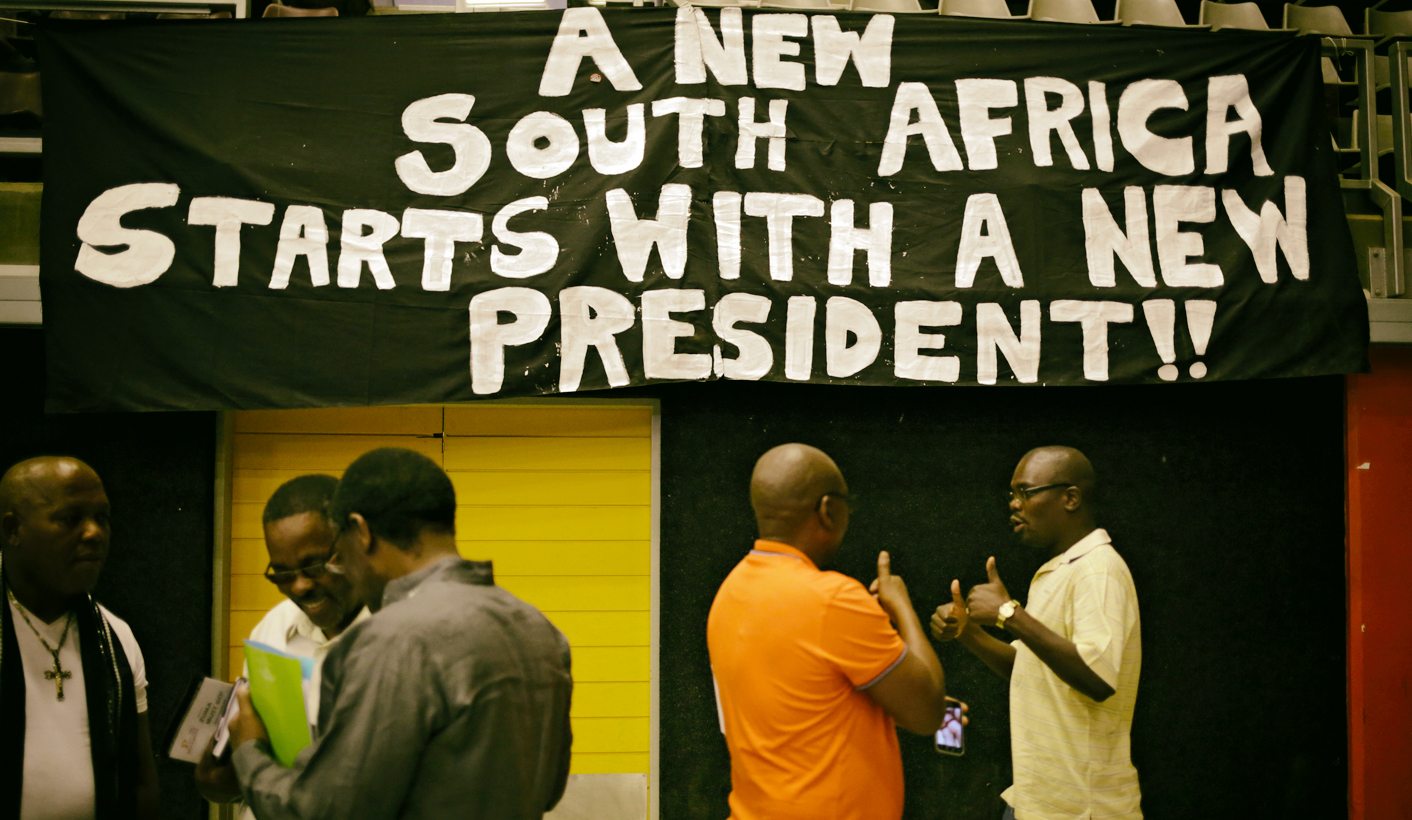 Last week religious leaders, activists and politicians stood outside the Constitutional Court and called on President Jacob Zuma to resign. On Saturday, it was followed by a mass meeting in Soweto. While it will never be the perfect time to bring down a president, they hope it’s the right time. By GREG NICOLSON and BHEKI C. SIMELANE.

We arrive an hour late at the University of Johannesburg’s Soweto campus, because, well, the president’s detractors never get their timing right. There’s a drum circle outside the hall. About 150 civil society members, politicians and concerned citizens file inside to find seats, where flyers have been laid out. “Food profiteers are CRIMINALS. They must go with ZUMA,” reads one.

They’re here to make a plan. South Africa’s at a crossroads, says the meeting’s co-chair Dinga Sikwebu. No one’s here to defend Zuma so we all know the starting point. To paraphrase, the president and the ANC’s majority in the National Assembly doesn’t give a shit about the Constitution. Now that’s out of the way, the meeting begins.

“What are the strategies to show Jacob Zuma the door?” Sikwebu asks.

Calls for the president to resign are hardly new. Scandals followed him into the ANC and state presidencies and never left. Then they multiplied. During his presidency there have also been rolling attempts to revive, unite and reform activism and civil society, which, outside of changes to large organisations like Numsa and the formation of EFF, haven’t led to a whole lot. The recent anti-xenophobia marches and to a lesser extent anti-corruption march at least got people on the streets and activists working together.

The UJ event, organised by the People’s Consultative Assembly for Democracy, the result of the appearance of civil society leaders on the ConCourt steps last week, is another attempt to bring people and organisations together to tackle the powers that aren’t making a whole lot of stuff better. But now, after the Nkandla judgment, there’s a narrow target on Zuma and the ANC.

So what’s the plan?

We hear two types of comments, often intertwined. There are calls for Zuma to resign and the National Assembly to be dissolved. Others question the system, asking whether Zuma and the ANC are empty vessels for the engines of our ills, such as racialised inequality, corruption, and, of course, capitalism.

“What we need to be doing is not just #RiseSouthAfrica but literally rise, South Africa,” says Wits student Naldei Malooa, encouraging people to go to the streets.

“The National Assembly must be dissolved and Zuma must resign. We cannot be ruled by men and women who are not bound by the Constitution,” adds Cope leader Mosiuoa Lekota.

John Appolis, from the United Front (remember, the coalition Numsa started to unite the left) says when the planned march takes place in Johannesburg on 27 April it must demand a face-to-face meeting with the president to tell him to resign. “We are committed to securing the removal of Jacob Zuma,” he adds.

Section27’s Mark Heywood outlines education and health disgraces. The link to Zuma? ANC premiers and the president, who have allowed the catastrophes to take place through maladministration and mismanagement must fall, he says. “We must turn Beyers Naude Square into Tahrir Square!”

Speaker after speaker takes the mic to condemn another aspect of the ANC government and encourage change. “Not a single political party can free the people but the people of South Africa can only free themselves,” says the EFF’s Dali Mpofu. “Before we take the struggle and hand it over to the people of SA we need to clearly define our path. This is not about Zuma, Nkandla, the ANC, this is about the whole system that has been inherited by the ANC.”

Photo: The EFF’s Dali Mpofu addresses the meeting calling for the president to resign on Saturday. (Greg Nicolson)

There’s mention of Putin, the nuclear deal, Denel, uniting people across class and age, the Guptas, what faith-based organisations can do, white supremacy, avoiding political messiahs, taking back the land, hunger and the drought.

For many, there’s a deep distrust of the current system. What’s next? Get rid of Zuma and then what?

“Let’s seriously consider why we are here. We need to ask ourselves this important question: what further steps are we going to take after getting rid of Zuma?” asks Genius Dlangala, a third-year student from NWU, Potchefstroom campus.

So what is the plan, we wonder. The struggle with opening up a meeting for mass involvement is that not everyone agrees on what they’re trying to plan for. There are different views and specific interests.

Photo: The feelings about President Zuma were clear. (Greg Nicolson)

There is some agreement. Again and again it is repeated that the planned protest on Freedom Day isn’t going to be enough. It has to be “the biggest mass rally of all time” but the meeting agreed to rolling action in all provinces, sit-ins, and peaceful disruption of events featuring the president, until he steps down. There’s agreement that civil society and its resources need to be mobilised (donations are welcome).

Will it lead to anything? Listening to the disparate voices, many of whom don’t command a mass constituency, cynicism is a natural reaction. The ANC and Zuma have survived again and again and efforts to create a united movement like that against the apartheid government have often failed to live up to the hype. Zuma and the ANC still have a large majority of support in much of the country, and also command key state institutions.

Yet since the Constitutional Court judgment, there’s been a collective expression of outrage, or at least of shame. It’s unclear whether the UJ meeting will lead to anything substantial, but at least people are meeting, talking and planning. Even Zuma, steeped in the ANC tradition of consultation, must appreciate the effort of the mass meeting.

Given the importance of the ANC, there will never be a perfect time to publicly call for the removal of its leader or the fall of the party, let alone the whole system. Those at UJ hope they’ve found the best time. DM

Main photo: The ‘People’s Assembly’ made up of civil society leaders and ordinary citizens meet to discuss how they can pressure the government into impeaching or demanding the resignation of South African President Zuma, in Soweto, near Johannesburg, South Africa, 16 April 2016. Civil Society groups included those from churches, Treatment Action Campaign and Section 27. They are calling for the resignation of the president after he was found by the Constitutional Court to have illegally benefitted from upgrades to his personal homestead known as Nkandla. EPA/CORNELL TUKIRI