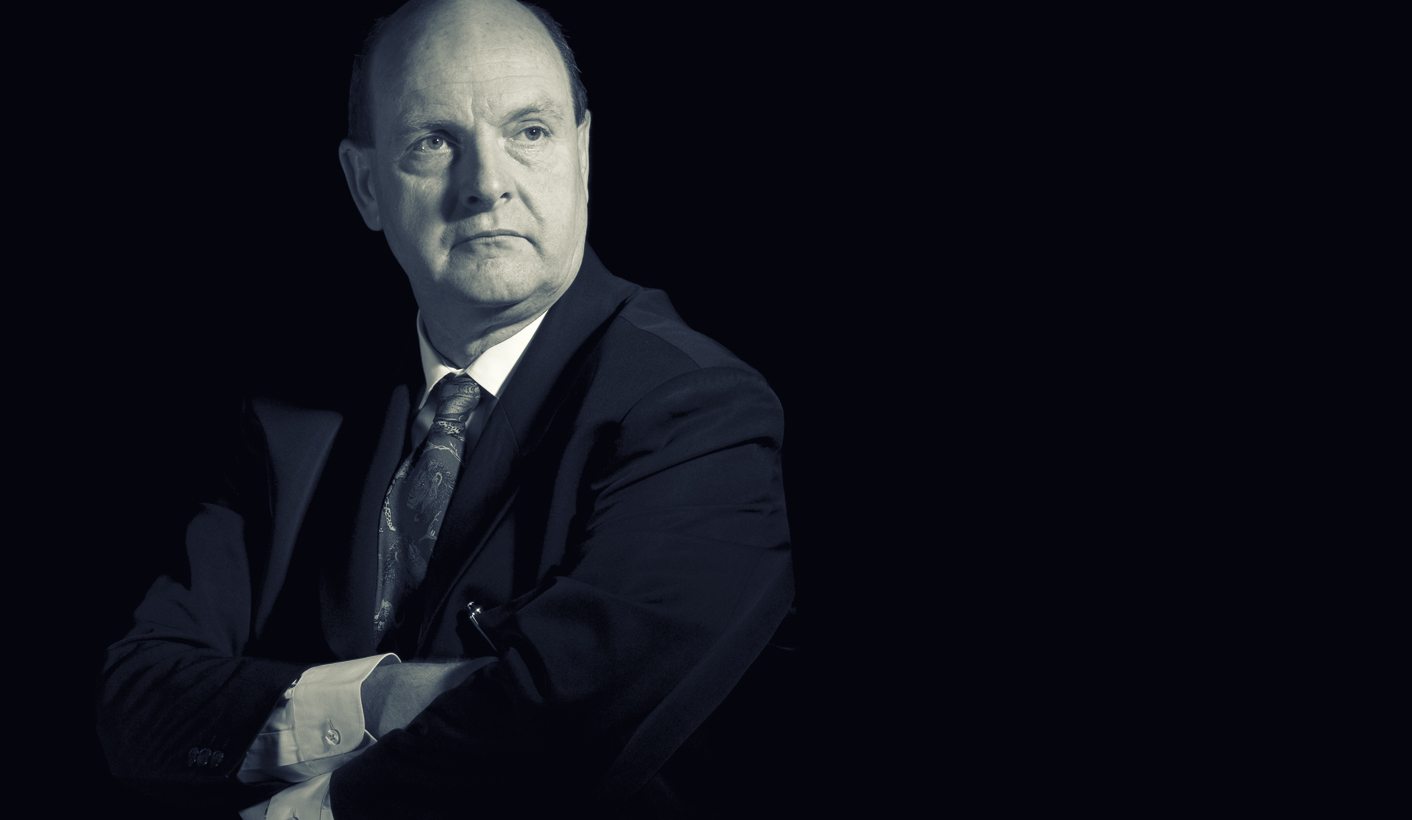 The arrest of investigator Paul O’Sullivan, who was dragged off a London-bound flight at OR Tambo Airport by 11 members of the Hawks on 1 April on charges under the South African Citizen’s Act, was irrational, an abuse of process and designed for an ulterior motive, his lawyers have written to the NPA. O’Sullivan’s arrest and detention “in inhumane” conditions, they say, are in contravention of the Prevention and Combatting of Torture of Persons Act. By MARIANNE THAMM.

Details of what exactly happened to forensic investigator Paul O’Sullivan after he was handcuffed and dragged off the plane in front of his children by the Hawks on Sunday 1 April have emerged in letter O’Sullivan’s attorneys, Darryl Furman and Associates, delivered to the NPA’s Advocate G S Maema on Thursday.

O’Sullivan, arrested on a relatively minor Schedule One offence, the contravention of 26B of the South African Citizen’s Act, was driven, say his lawyers, in a blue light convoy at about 220km an hour to Pretoria Central police station. There he was flung into a rat-infested prison cell with “raw sewage on the floors”, “excessive screaming” and “dried and caked human excrement on the walls and toilets due to the absence of toilet paper”. O’Sullivan too was offered the standard SAPS-issue “lice-infested” blanket.

The detention of O’Sullivan in these inhumane conditions, said Furman, not only constituted an offence in terms of Section 3 of the Prevention and Combatting of Torture of Persons Act of 2013, “but patently formed part of a stratagem to secure his co-operation, not in relation to the alleged contravention of Section 26B of the Citizen’s Act, but in relation to extraneous matters relevant to high ranking officials and ex-officials”.

On Tuesday last week the SAPS suspended whistleblower, Colonel Sandragasen Moonsamy, head of East London’s local criminal records centre, after he had offered a sworn statement in support of O’Sullivan’s criminal charge of “corruption, money laundering and or racketeering” lodged against Phahlane in February.

Moonsamy’s statement is contained in a docket sent to the Independent Police Investigative Directorate and which includes allegations of impropriety against Phahlane linked to a 2011 chemical supply tender for the police forensic division, which Phahlane headed before his appointment as acting national commissioner in October last year.

Since 2014 O’Sullivan has lodged several charges of corruption, fraud, racketeering and defeating the ends of justice against various police officials. O’Sullivan has also laid charges against former head of Crime Intelligence, Richard Mdluli.

In this light it would be safe to say that the Hawks arrest of O’Sullivan on 1 April was not because they intended to check out his citizenship or investigate these serious complaints against their allegedly corrupt colleagues, but rather to find out who was snitching and how much O’Sullivan knows.

This, it appears, is the current strategy and modus operandi of the the country’s supreme crime-fighting Directorate For Priority Crime Investigation, the Hawks, under Ntlemeza.

O’Sullivan’s attorney said after the investigator’s arrest he was interrogated by senior members of the Hawks “including a general”, a session which had no relevance to the Section 26B offence “but was exclusively aimed at obtaining information relevant to a hidden agenda relevant to the high-ranking officials and ex-officials”.

The investigator was then threatened, said his lawyer, that he “faced a long term in prison for alleged contraventions of offences pertaining to treason, terrorism and unlawful intercepts”.

Further evidence that the 1 April arrest had been a ruse is the fact that the alleged offences under the Citizen’s Act – that O’Sullivan had travelled on two legally-obtained passports – had occurred on 15 December 2015 and 13 February 2016, “a fact the Hawks were well aware of long before our client’s arrest on 1 April”.

“The law is clear that a discretion whether or not to arrest must be rational in relation to the power of arrest and not arbitrarily, or in bad faith, or with ulterior purpose… Our case law also makes it clear that an arrest, being the most drastic measure to secure a person’s attendance at his trial, ought to be confined to serious cases, i.e. that it should be confined to cases where such a person faces a relatively serious charge,” wrote Furman.

The Hawks, said Furman, had been “well aware” that O’Sullivan had been forced to flee South Africa on those dates for the “lawful and acceptable reason” that he had received death threats from convicted underworld boss Radovan Krejcir.

After his arrest the Hawks had also offered O’Sullivan “police bail” if he co-operated and that he would be released immediately if he provided information on the high ranking officials and ex-officials. Afterwards this was altered to an unopposed bail application that would take place at the court on the Monday morning. On the morning, however, police opposed bail.

“When it was revealed to them that their undertakings had been recorded, the officials realised exposure and embarrassment, and agreed not to oppose bail, but on stringent conditions” which Furman said are “unjustified” in relation to the minor offence of the Citizen’s Act.

The Hawks were also interested in another case that involved O’Sullivan, his investigation into SAA’s chairperson of the board, Dudu Myeni, who fell victim to a fake offshore bank account hoax in March 2015. In this matter, forged documents had been leaked to various officials that indicated overseas bank accounts at BNP Paribas bank in Paris and Bank Austria in Vienna, attributed to Myeni, and with funds of approximately R240-million.

O’Sullivan had called for the resignation of Myeni because of the documents that had been given to him by an informer but which had turned out to be false. O’Sullivan later apologised to Myeni and confirmed that he had fallen for the hoax.

During his 1 April detention the Hawks, said O’Sullivan’s lawyer, had agreed that they would issue a summons for the investigator to appear on charges of intimidation relating to the SAA case; however, on 6 April, during his appearance at the Kempton Park court, Hawks officials had attempted to convince the prosecutor to obtain a warrant for O’Sullivan’s arrest.

The letter ends with Furman requesting that the docket relating to the charges under the Citizen’s Act be finalised and forwarded to all concerned so that a trial date could be set and further asks that should O’Sullivan be charged he not be subjected to inhumane treatment.

While the Prevention and Combatting of Torture of Persons Act of 2013 was signed by President Jacob Zuma on 25 July 2013, and it creates an obligation by the state to promote awareness of the Act among public officials, it appears the Hawks didn’t get the memo.

In its preamble, the Act acknowledges that South Africa “has a shameful history of gross human rights abuses, including torture of many of its citizens and inhabitants”. And while torture was a feature of the apartheid era it continues to be pervasive under the post-1994 democracy.

O’Sullivan’s detention in inhumane circumstances as well as the attempt by the Hawks to coerce and intimidate him by threatening to jail him and charge him with treason or terrorism could be viewed as a contravention of this act, because of the country’s past which was haunted by state torture that the act envisages severe punishment for those who contravene it, including life imprisonment.

NB Daily Maverick sent a list of questions to the NPA requesting a response to the matters raised in the letter by O’Sullivan’s lawyers but had not received a response at the time of writing. DM

Photo of Paul O’Sullivan by Sally Shorkend for Maverick magazine.