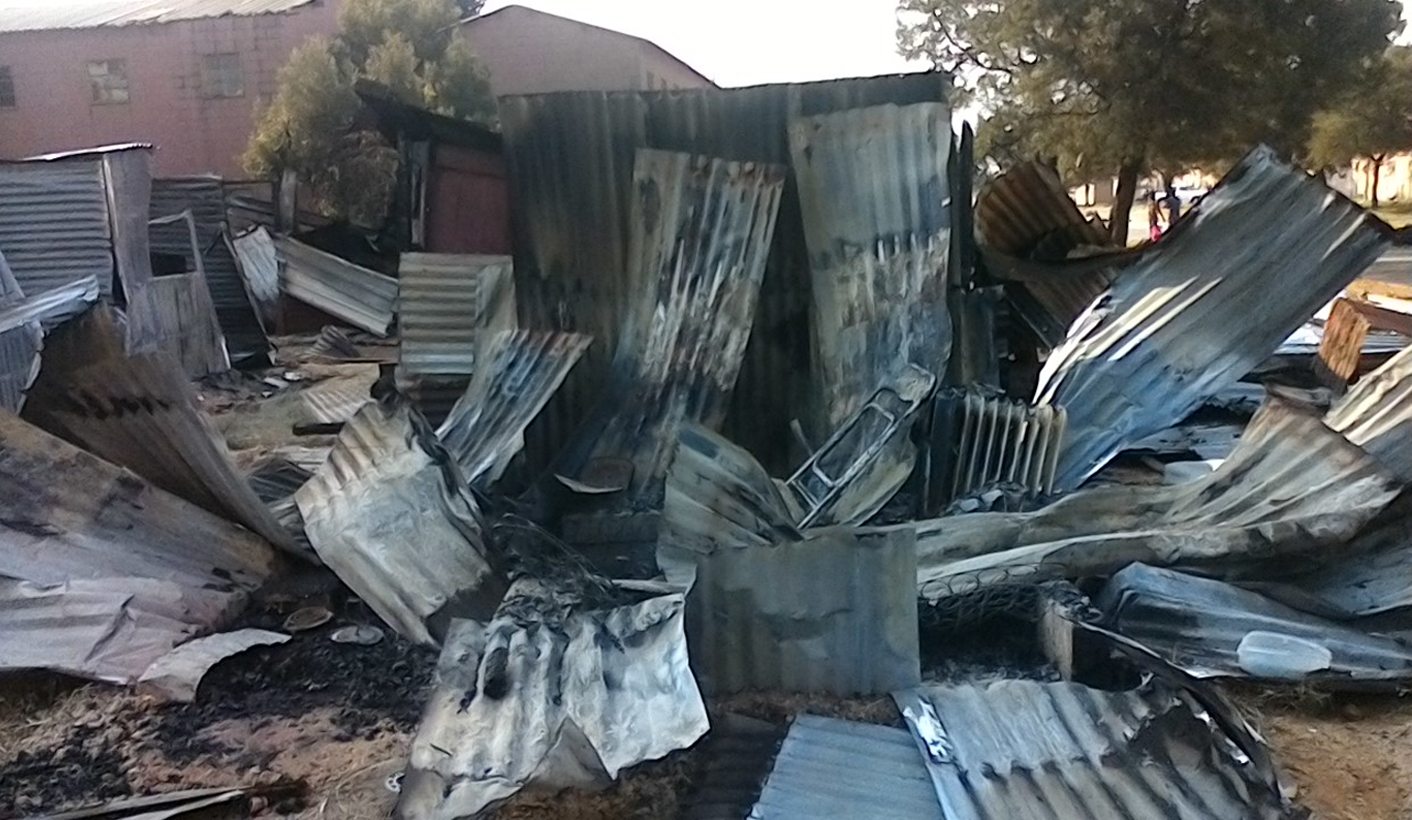 Several people landed in the Thembisa hospital with serious injuries while unconfirmed reports say four others lost their lives during a “tribal” altercation sparked by a failure to meet housing demands. By BHEKI C. SIMELANE.

The Sethokgwa Hostel in Thembisa turned into a battleground as residents turned on one another because of contrasting views on a housing project in the area. For some time now, hostel dwellers have been pushing to occupy the newly built blocks of flats. In the last encounter to force the council to hand over the keys to the council offices and new houses, aggrieved residents had given the council two weeks, within which the council had not responded.

It was in a meeting Gauteng Human Settlements MEC Paul Mashatile and Water Affairs and Sanitation Minister Nomvula Mokonyane that residents discovered they would be required to pay R1,500 rent on average. Which meant that those hostel dwellers who are unemployed had to find alternative accommodation when the old hostel structures that they currently occupy are demolished.

The uncertainty over accommodation prompted an angry reaction from Economic Freedom Fighters (EFF) members who demanded that working or unemployed, all hostel dwellers must be catered for in the new housing project. The group, which was wearing the EFF’s red berets and shirts, continued to demand that they be given the keys to the offices and new flats, but the council still would not budge.

The ANC also got involved, believing that the demands the EFF were making were unreasonable as procedure had to be followed in allocating the new houses. They went on to say that the EFF was not even around during the preliminary stages of the project and had to keep their views in check because they do not count for much in the community. But some who said they wouldn’t speak as EFF supporters but as concerned residents said the EFF was right to fight for the unemployed. They questioned why the flats would be up for rental with the high unemployment rate.

Trouble started on Monday evening when the aggrieved crowd decided they were going to wake everybody up and mobilise. They threw stones on rooftops and damaged windows demanding that people come out in support. Several shacks were burned down with huge losses to residents. Over a dozen police vehicles were spotted at the hostel on Wednesday afternoon. Dozens of Red Ants said they had been deployed to monitor the situation and maintain calm.

“We know how to deal with them and we will beat them again if they start tonight,” one Red Ants employee said. The Red Ants are also monitoring the new block of flats to keep out illegal occupants.

One Red Ant employee who asked to remain anonymous said he had lost everything. “The shack I stay in was torched and I lost all my stuff, including my work uniform and laptop. Everything in the shack was burned, luckily I was out working trying to calm the people and my three kids are in Pretoria at my place,” he said.

The council offices were also torched and windows shattered by the angry rioters on Wednesday. All these incidents unfolded as the area’s councilor lies in hospital where he is being treated for diabetes.

ANC supporters decided to protect the council by refusing to hand over the keys by confronting EFF members. But there are many Pedi-speaking EFF members much as there are many Xhosa and Ndebele-speaking ANC supporters. This immediately forced a split, which propelled the conflict to be resolved along tribal lines. These two groups have been fighting since Monday night, also often clashing with the wayward Red Ants.

A woman at the local council offices refused to comment beyond pointing out that there was very little they could say as the right person to comment, the councillor, was lying in hospital. Three officials, among them Gauteng MMC Aubrey Nxumalo, visited the area on Tuesday to try to restore calm. The area was relatively quiet during the day on Wednesday as residents prepared for a meeting that was to take place on the same day at 17:30. The agenda of the meeting was not immediately clear.

The ANC’s Xhosas and Ndebeles seemed to be in control of the area on Wednesday as some, in ANC T-shirts, boasted, with little confidence, that the Pedis had fled. An elderly man in a yellow ANC shirt with a fading picture of Jacob Zuma said EFF people had run away. Asked what could happen if they were to immediately turn up, the elderly citizen said, they wouldn’t dare, they wouldn’t dare,” refusing to furnish reasons why he sounded so sure.

But the violence did not end at the hostel. By Tuesday morning it had spread to nearby to foreign-owned shops.

“They broke in on Monday night and cleaned out my shop. Cellphones, some belonging to customers, were stolen, television sets, phone batteries and chargers. When I arrived with police they all ran,” Ali Aqdas, a Pakistani businessman, said. Aqdas said he could not identify the looters because it was dark and that he saw no point in opening a case. When Daily Maverick arrived at his business on Wednesday workers were fitting steel bars to the door. Aqdas said his losses amounted to more than R150,000.

Mandiwana Mushe, a 21-year-old student, said he managed to save his laptop and a few of his clothes when the crowd gathered on Monday night. His shack was not burned but it was torn into pieces. He said he had found a place to stay. Mushe said this would affect his education as he might not be able to afford his fees because he will have to use some of the money on rent. “I will not be coming back here again,” Mushe said.

The flaunting of political party patriotism is rife at the hostel. Graffiti depicting political party allegiance is boldly splattered on the walls. The segregation that has since imposed itself on the conflict has been reduced to a tribal war.

The Ekurhuleni Metro Police Department said it was called to assist calm the situation. “It seemed people were not satisfied with the houses they were allocated but I cannot delve into that because of its political nature,” said Kobeli Mokheseng, Spokesperson for the EMPD. Mokheseng said police vehicles were damaged and one officer sustained injuries but was recovering. He said several other people were injured and that no one had been arrested. He could not confirm the four deaths as he said they had been hastily called in to assist.

The area’s EFF leadership was not at the hostel during Daily Maverick’s visit on Wednesday and unreachable. “I don’t think this will ever end because each faction’s members have been hurt and there will forever be a need for revenge. I’m scared, these people are ruthless. They go around hacking others and burning their stuff and worst of all they prefer to do it under the cover of darkness, by which time we are sleeping with our children. It’s a pity our councilor is sick. This issue needs urgent attention as it is taking us back. The EFF and ANC, with the help of the provincial settlements department, must reach a compromise,” an elderly woman said.

She said tensions were high on Tuesday and that she had sent her kids to stay with relatives while a solution to the hostel’s wars was being sought. She said she could not afford rent if she had to pay to for accommodation in the new flats. DM