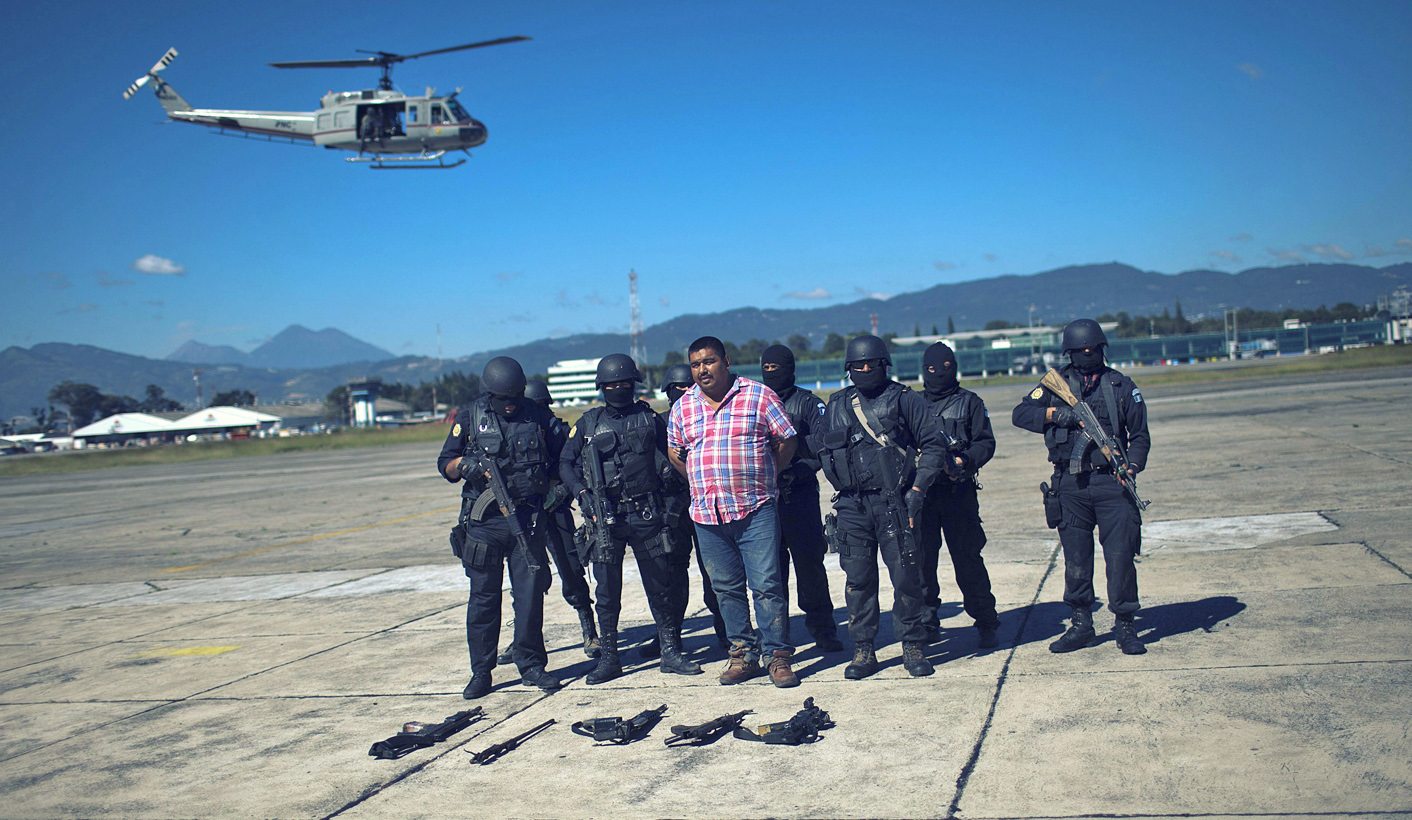 Since 1961, the international community has invested huge resources to enforce the UN mandate to create a “drug free” world. Yet, after decades of interdiction and eradication, organised crime around the globe has merely shifted routes and markets. By INTERNATIONAL CRISIS GROUP.

Massive corruption, violence and human rights abuses are consequences of a too often militarised response. World leaders who meet 19-21 April at the UN Special Session on drugs (UNGASS) must do much more than review the struggle. They must begin to fix its flaws, stem the bloodshed and bolster societies besieged by transnational crime. Crisis Group recommends that UNGASS draw lessons from a history of failed strategies and poor results and from our field experience to look closely at Latin America, where cartels outgun national police, coerce and corrupt officials and produce countless victims in a battle to control drug production, transport corridors and distribution networks.

The UN Drug Conventions of 1961, 1971 and 1988 set the legal framework under which illicit substances are defined as a danger to national and international security. Facing rising violence and recognising the failure of the anti-drug regime to achieve its goal, the presidents of Colombia, Mexico and Guatemala called in 2012 for UNGASS to be advanced three years, to 2016. They envisaged an opportunity to design drug policies focused above all on promoting public health and human rights, without neglecting citizen security.

Much evidence about what has gone wrong with the global counter-narcotic regime and many proposals have been discussed during UNGASS preparations. While there has been an inclusive debate involving civil society, the political climate does not yet appear conducive to major global changes. Only 53 of 193 member states participated in the final preparatory session last month in Vienna, and they endorsed few new ideas for possible inclusion in the UNGASS outcomes document. From a health, human rights and security perspective, the language for review is weak.

Crisis Group has reported on violence related to drug trafficking and criminal networks for more than a decade. Our extensive 2008 double report on the worrying impact of counter-narcotic policies on violence in the Andean region concluded that “the international community needs urgently to acknowledge mistakes and adopt fundamental policy improvements or transnational criminals will be the winners”. The Latin American Commission on Drugs and Democracy said much the same. We expanded that message in reports on Guatemala (2011) andMexico (2013), calling for leaders “to open a serious debate and to re-evaluate policies that have failed to alleviate the suffering caused by drug addiction or to reduce the corruption and violence associated with drug production and trafficking”. We repeat this call today and urge collective agreement at UNGASS on a meaningful, systematic mechanism to reform the contemporary anti-drug regime in the three years until 2019, when the UN is to set the next 10-year drug policy agenda.

What Can UNGASS Learn from Latin America?

Latin America is the front line of the war on drugs. Examination of experiences in Colombia, Mexico and Guatemala – the same countries that urged an early UNGASS – can help with the critical assessment required for national and international drug policies to be transformed so that they treat chronic users through the public health rather than criminal justice system, prioritise harm reduction rather than incarceration and improve security rather than multiply the threats to it in the region. These three countries, where Crisis Group works extensively, are representative of how drug-producing and transit regions are severely affected by policies that require a global approach, including reflection about the impact of US policies.

In Colombia, the drug economy has been an integral element of the long civil conflict, at least from the mid-1980s. The administration of President Juan Manuel Santos knows the imminent prospect of ending the conflict with the FARC and ELN insurgencies is the best moment for both greatly reducing illicit trafficking and testing drug policy reforms. On 9 May 2015, it suspended aerial spraying of coca crops with glyphosate. On 22 September, it adopted the Integral Strategy for Substitution of Illicit Crops, the objective of which is to invest in the coca-producing regions. Following the principle of reducing harm, it also proclaims that drug users should no longer be imprisoned. On 21 December, a decree on regulation of the cannabis market for medical and scientific purposes was adopted. A lesson already reflected in the pending peace agreement with the FARC is that for these new policies to succeed and peace to be sustainable, voluntary coca plant eradication and alternative development must be a priority; peasants and youths, otherwise likely to be pulled into the drug trade, must be given long-term economic options.

In Mexico, over-reliance on the military violates human rights and erodes law enforcement in some regions. As Colombia confronted its drug cartels, traffickers in Mexico took on an increasingly powerful role. In 2006, President Felipe Calderón initiated a campaign that prioritised decapitation of the cartels, accelerating their fragmentation into smaller, often deadlier groups. Little has changed under President Enrique Peña Nieto, despite promises to prioritise social programs aimed at violence prevention. Deaths due to drug-related violence since 2006 exceed 90,000. Impunity remains the norm in regions where powerful gangsters have overwhelmed, intimidated or corrupted local, state and even federal officials. The 2014 disappearance of 43 students in Guerrero state was especially horrific but not unprecedented. Many gangs have diversified from drugs into predatory crimes, such as kidnapping and extortion, often burying victims in unmarked, mass graves. Security and justice institutions are frequently unable or unwilling to protect citizens and bring dangerous criminals (including corrupt officials) to justice.

Geography puts Guatemala – midway between Colombia and the US – at one of the world’s busiest illegal drug intersections. Cocaine (and ingredients for synthetic drugs) arrives by air, land and sea and moves on to Mexico, then the U.S. Its highland climate is ideal for poppy cultivation. Lenient gun laws and a history of arms smuggling make weapons plentiful. An impoverished, underemployed population is a source of recruits. In some regions, traffickers are prominent entrepreneurs in both licit and illicit businesses. There are signs of some progress. The International Commission against Impunity in Guatemala (CICIG) has produced investigations that, with support of brave prosecutors, led to indictment and imprisonment of corrupt officials and their associates. Most recently, nineteen senior officials, including ex-President Otto Pérez Molina, were indicted and arrested in a massive corruption case. President Jimmy Morales now faces the challenge of continuing the fight against endemic corruption and crime and coercion that allowed creation of parallel illicit structures. But Guatemala has limited resources and relies heavily on international co-operation, a factor that is key both for any sustainable success against crime and impunity, and also for opening a national debate on its policy options.

The US is deeply engaged in developing and implementing drug policies in Latin America. While its Government Accountability Office concluded Washington’s Plan Colombia improved security there against insurgencies, counternarcotic strategies have been criticised as ineffective in eliminating coca cultivation or production and marketing of illicit drugs. A recent reallocation of significant resources from interdiction and military aid to human rights and development can help rebuild the social fabric and strengthen rule of law and should be expanded. Distortions in US drug policy in the region will not be overcome, however, without a domestic debate on the war on drugs it announced in 1971 and that many today consider unwinnable. Crisis Group encourages Congress to form a blue-ribbon, independent commission to review internal and external strategies from human rights, health and security perspectives and present conclusions to the new administration in January. Similar mechanisms might be created in other countries.

UNGASS is not the last chance for member states to fundamentally change their counter-narcotic strategies, but it is the opportunity to agree on a systematic review that can lay the groundwork for decisions in 2019. Part of the approach should be to draw from other UN commitments, especially the Sustainable Development Goals, which envisage incentives for treating drug users and drug traffickers in fundamentally different ways. Including other UN agencies and multilateral and regional mechanisms in the review is equally essential.

Latin American experience suggests drug policy must take into account the interests of those directly affected by crime and violence, including the weakest links of the criminal chain. Crisis Group recommends that UNGASS draw appropriate lessons from the above examples and create mechanisms that can help states collect evidence on national drug policies that give adequate weight to health, safety, human rights and development implications. The Secretary-General should lead in encouraging debate and endorse formation of an independent expert group, as proposed by Colombia, Uruguay and several civil society organisations, to gather such evidence and propose alternatives to current drug policies in the lead-up to 2019. DM