Dubaigate: Des van Rooyen does a disappearing act a day... 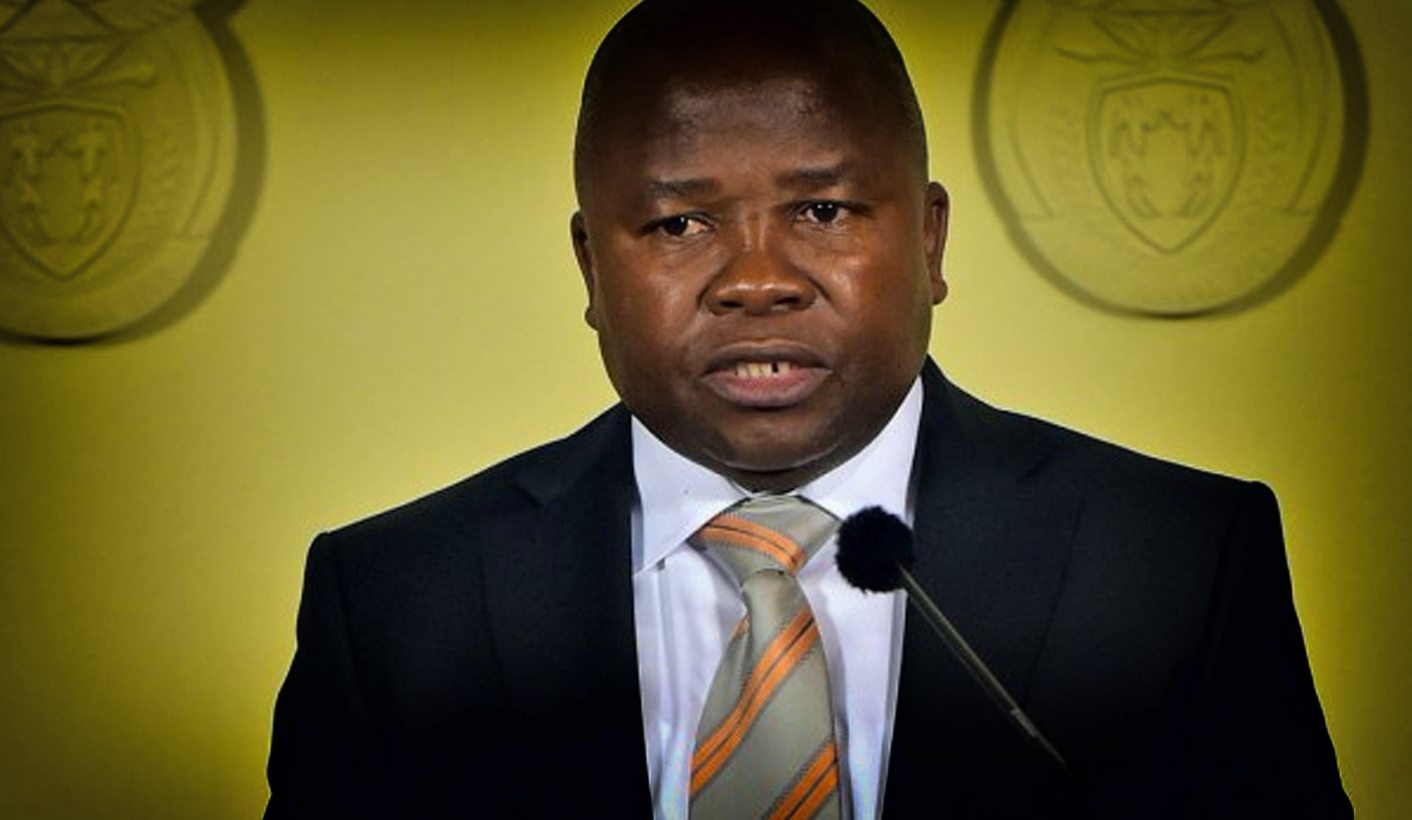 There we were, on Sunday night, the South African press corps, packing in our laptops, chargers and breath mints in preparation for a scheduled 9am Monday briefing by Minister of Co-operative Governance and Traditional Affairs, Des van Rooyen, on the country’s state of readiness for local elections. Then at about 9pm an e-mail from GCIS media liaison plopped into our inboxes with red text at the top that read “POSTPONED INDEFINITELY!”. What happened to Des? By MARIANNE THAMM.

NB: Monday, 11 April, marked 40 years of All the President’s Men, that seminal movie which dealt with the original ‘gate’ scandal, Watergate. – Ed

It takes a brave or perhaps a suitably thick-skinned public official to face the volley of tough questions South African journalists tend to lob during important press conferences. There’s usually no holding back. South Africans who have of late found themselves exposed to a new genre of reality TV, the live broadcast of impromptu political press briefings, would have witnessed the heat. ANC Secretary-General, Gwede Mantashe, is an old pro when it comes to dealing with the media and knows how to return a serve better than Serena Williams.

The e-mail from GCIS late on Sunday night offered no explanation for why an important media briefing on the country’s readiness for local elections by Minister of Co-operative Governance, Des “Weekend Special” van Rooyen was “POSTPONED INDEFINITELY!” E-mails to GCIS simply bounced back.

Of course, when the briefing had been originally scheduled Van Rooyen’s office could not have known that on Sunday morning the country’s media would be drowning in headlines about the minister’s private trip to Dubai last year on 20 December which just happened to coincide with a visit to the city by the Gupta family.

The trip occurred shortly after Van Rooyen puckered the chair at the Treasury for four days before President Jacob Zuma, who had sprung Des on the nation as a Christmas surprise, had to fire and replace him with Pravin Gordhan.

On Sunday, the Sunday Times reported that Van Rooyen, as well as Minister of Mineral Resources Mosebenzi Zwane (another alleged Gupta recommendation for a ministry), had both skimmed through that bucket list destination, Dubai, near the end of 2015 albeit at different times.

The Gupta family just happened to be in the same place at the same time on both occasions.

Van Rooyen claimed that his visit had been “personal” and that he, and not we, had paid for it. There is, of course, a lot you can do in Dubai in half a day before you have to dash to catch your plane home. You could try a half-day stroll around the city’s harbour or you could look at the dolphins in the aquarium in the “enormous, dazzling and opulent” (TripAdvisor) Dubai Mall. Durban just doesn’t compare.

Daily Maverick’s questions to Minister Van Rooyen’s office about whether the trip had been business or pleasure and whether he or we had paid for it were not answered.

Considering news reports, one can only surmise that Minister Van Rooyen must have got cold feet and needed a bit more time to prepare himself for the questions (or dodge them for now) about his trip and that were bound to be asked. These would most certainly have shifted focus from the local elections and firmly onto the Gupta family and Van Rooyen’s relationship with them. A bit of a media greenhorn, Van Rooyen would be bound to be Robert Dee (the world’s worst professional tennis player) to Mantashe’s Williams.

President Zuma too swung by Dubai in what the Sunday Times said was a “last-minute” addition to his trip to Saudi Arabia last month. Acting presidential spokesperson, Bongani Majola, told Daily Maverick that the president’s office had taken exception to the Sunday Times’ suggestion that President Zuma’s trip had been unplanned and included in his response a 25 March announcement about the fact that the president was “to lead a South African delegation on a State Visit to the Kingdom of Saudi Arabia and Working Visit to the United Arab Emirates”.

And while the UAE is a federation of seven emirates, Dubai is not specifically mentioned in the 25 March announcement.

On Monday the Democratic Alliance was less cynical about Des’s disappearing trip and in a statement said that he was in fact trying to dodge questions about government’s readiness for the imminent Local Elections (DA caps) scheduled for 3 August.

“Given that this is a matter of national importance I will write to Minister van Rooyen requesting that he make public the full reasons for not going ahead with the press conference as scheduled,” said Kevin Mileham, MP and DA Shadow Minister of Co-operative Governance and Traditional Affairs.

Mileham added that it was well-known that government and the IEC were under pressure in preparing for the elections.

“The date of voting is already virtually as late as can be constitutionally permitted. The uncertainty over the finalisation of the voters’ roll raises concerns over a potential constitutional crisis if voting does not take place within the prescribed time and with the requisite requirements having been met,” he said.

But the DA had also clearly been joining dots, adding to their statement that “Minister van Rooyen has chosen to concern himself with protecting himself from uncomfortable questions regarding allegations that broke yesterday that he was in Dubai at the same time the embattled Gupta brothers were shortly after he was appointed as Finance Minister. It is clear from the timing of this cancellation that Minister van Rooyen is not interested in answering the queries of concerned voters but rather preoccupied with undue political motives to stave off the public embarrassment from this ‘Dubai scandal’”.

Dubaigate – as we have just named it — is bound to feature in the news loop for quite some time. The DA has said it will be tabling questions this week to ascertain the government’s readiness for the coming elections as well as questions “with regards to the nature of the Minister’s visit to Dubai and who he met with. The country cannot suffer while one individual tries to protect himself from a compromising scandal.”