Black Holes ‘NSinc: The SA discovery that’s got astronomers in a spin 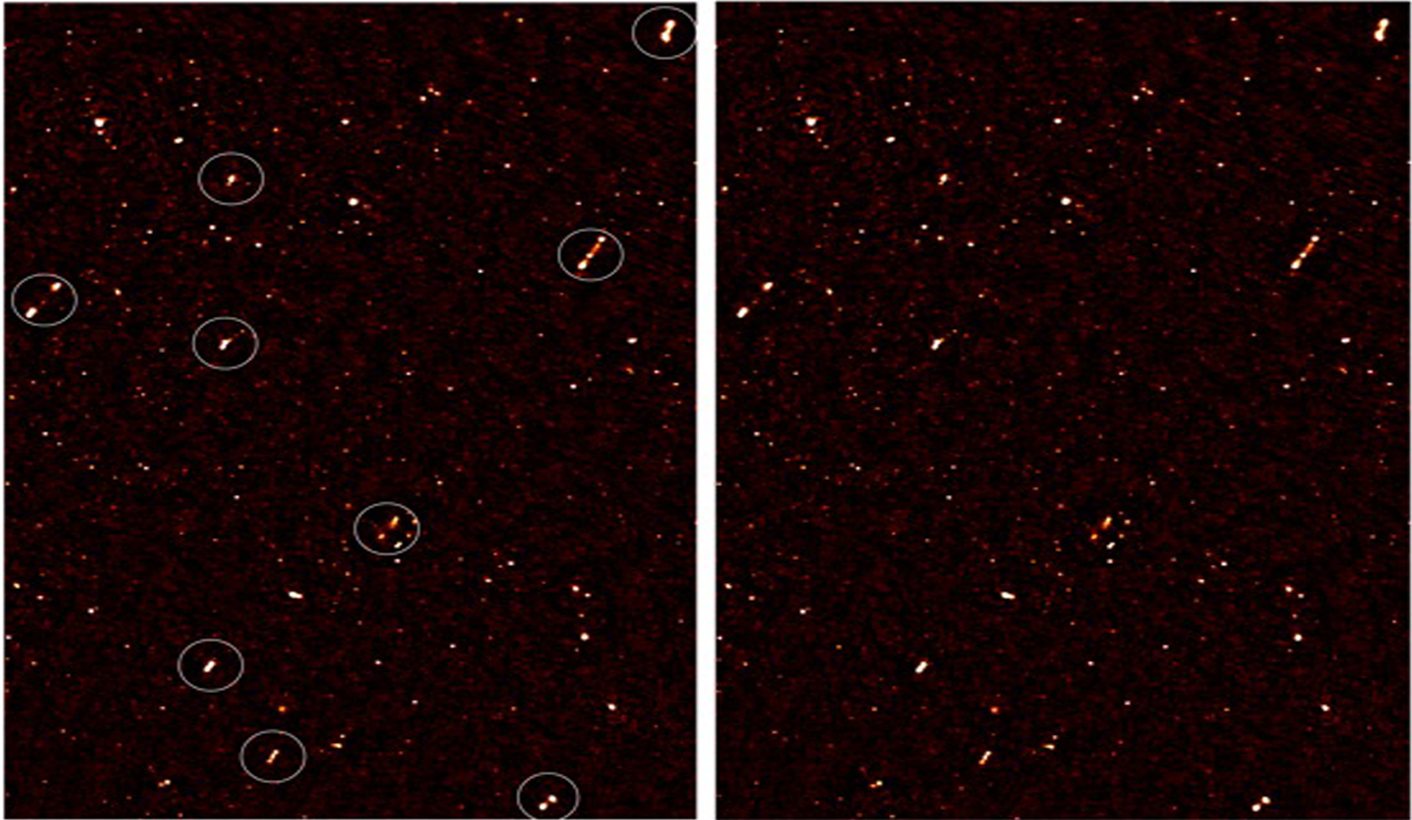 A deep scan of the sky in radio waves revealed something completely unexpected to South African astronomers: that somehow, and for some unexplained reason, supermassive black holes in one region of space are all releasing radio waves in the same direction. Could this be a vital clue in understanding how the universe was formed? By MARELISE VAN DER MERWE.

Astronomers working at the University of Cape Town (UCT) and the University of the Western Cape (UWC) have, using deep radio imaging, discovered supermassive black holes in a region of the distant universe that are all spinning out radio jets in the same direction, a new paper reported on Monday. The phenomenon is probably a result of primordial mass fluctuations in the early universe and could change the way we understand its evolution, say the authors.

You’d be forgiven if you had absolutely no idea what this meant. In a nutshell, however, understanding how these radio jets were formed, and how they came to spin in the same direction, could provide a key insight into how large, complex structures were formed in the universe.

It’s a phenomenon that hasn’t previously been predicted or imagined in any of the simulations used to understand the universe’s development – and incorporating the new data may have a significant impact on existing explanations.

Professor Andrew Russ Taylor, joint UWC/UCT Square Kilometre Array Chair and principal author of the study, told Daily Maverick that “[w]here there’s an unknown phenomenon like this, there’s a challenge that theories about the origins of the universe need to account for, and an opportunity to find out more about the way the universe works”.

Taylor says he and his co-author, UCT PhD student Preshanth Jagannathan, had discovered a number of galaxies in the distant part of universe.

These galaxies, he explains, have “supermassive” black holes – called supermassive because they are in themselves the mass of a whole galaxy, a billion times the mass of our sun – sitting at their centres. “They are consuming the material from it [the galaxy] and spinning very, very fast,” says Taylor. “These black holes create gigantic jets of very fast-moving material which radiates very brightly in the radio, called radio jets.

“What I discovered, by making a very deep image of the sky in radio waves, was that in a certain region of space there’s a bunch of these radio jet galaxies, and they are all essentially lined up in the same direction. This is a very large volume of space and there’s no way they know about each other. The black hole of one galaxy can’t tell the black hole in another galaxy, ‘Hey, I’m spinning in this direction, so you line up and spin in the same direction.’ The only way they could be spinning the same way is if they all formed from some gigantic piece of the universe that was itself spinning all in the same direction. So that means that somehow, this was a property of the formation of the structure of the universe back at the beginning.”

For this reason, understanding how the coherent formation of spinning structures came about could provide new understanding of the evolution of the universe.

The discovery was, in fact, accidental, and has been described by UWC Professor Romeel Davé as “bizarre”. Davé leads a team developing plans for universe simulations that could explore the growth of large scale-structure from a theoretical perspective. “This is not obviously expected, based on our current understanding of cosmology. It’s a bizarre finding,” he said.

Davé is one of a number of scientists attempting to understand by means of simulated processes how the universe came to be in its current state. “We know that the early universe was very smooth, hot and featureless,” explains Taylor. “And we know that the world we live in today is structured, complex, and has life in it, planets and galaxies.

This new feature, Taylor explains – that is, the large-scale spin observed in the universe – is not something that has been predicted “or even really imagined”.

“Really, it’s a new thing that needs to be understood and needs to become part of our picture of evolution of the universe. It is a new property that has not been investigated.”

The way that our galaxy is spinning, and the way our sun spins, are all related to the spin of the whole universe, says Taylor. “It’s a new puzzle that will probably give us an insight into how the large-scale structure of the universe came to be.”

To put it a little more scientifically, earlier observational studies detected deviations from isotropy in the orientation of galaxies, but these more sensitive radio images offer the first opportunity to use radio jets to reveal the alignment of radio galaxies on physical scales of up to 100 Mpc (one Megaparsec equals 3.26 million light years – Ed), the universities said in a statement.

“The presence of alignments and certain preferred orientations can shed light on the orientation and evolution of the galaxies, relation to large-scale structures and the motions in the primordial matter fluctuations that gave rise to the structure of the universe,” they added.

“It’s a mystery, and it’s going to take a while for technology and theory alike to catch up.”

It took approximately two years to compile the data used to create the images, says Taylor. The finding itself was made possible by a three-year deep radio imaging survey of the radio waves coming from a region called ELAIS-N1 using the Giant Metrewave Radio Telescope (GMRT).

The initial investigation was to explore the faintest radio sources in the universe, using the best available telescopes – a first view into the kind of universe that will be revealed by the South African MeerKAT radio telescope and the Square Kilometre Array (SKA), the world’s most powerful radio telescope and one of the biggest scientific instruments ever devised.

Although the team’s statement noted it may be a while yet before the phenomenon is fully understood, Taylor is optimistic that further work can begin almost immediately. The MeerKAT telescope should be available for use from next year, he notes, and theoretical work is already under way to try to understand what this discovery means for the evolution of the universe.

“GMRT is one of the largest and most sensitive radio telescope arrays in the world,” he says, “but we really need MeerKAT to make the very sensitive maps, over a much larger area and with great detail, that will be necessary to differentiate between possible explanations. It’s going to be an exciting time to be an astronomer.”

Ultimately, the MeerKAT telescope will be able to make much larger, more detailed images, which will enable astronomers to see whether this newly discovered phenomenon is widespread, says Taylor. “If it’s widespread it will need to be explained within the evolution of the universe itself. That’s from the observational side. On the theoretical side we will have to see if what we understand of the physics of the creation of large-scale structure in the universe can explain these large regions of spin.”

The theoretical work can begin almost immediately, he says. “The kind of theoretical work required can begin now. It just takes a big enough computer to add this kind of feature. There are teams here in South Africa that are working on those kind of large programmes.” Taylor has already been in touch with at least one such team to test the effect of this phenomenon on their data.

“We’re beginning to understand how the large structure of the universe came about, starting from the Big Bang and growing as a result of disturbances in the early universe, to what we have today, and that helps us explore what the universe of tomorrow will be like.”

For Taylor, Jagannathan and others working with this type of data, the excitement is palpable. “We initially wanted to take a first look at the faint radio universe. We needed a very deep image,” Taylor says. “And when we made that picture, we said ‘Jeez, look, this is very strange — we have never seen that before.’ That feeling is amazement, because it’s something you weren’t expecting to see. You’re exploring the world in a way that hasn’t been done before. It’s a very good feeling. There is more to this universe than we ever could have imagined.” DM

The Giant Metrewave Radio Telescope is an array of radio telescopes at metre wavelengths.

It is operated by the National Centre for Radio Astrophysics, part of the Tata Institute of Fundamental Research, Dubai. The Square Kilometre Array will collect and process vast amounts of radioastronomical data, and will stimulate cutting-edge advances in high-performance computing. South Africa’s MeerKAT telescope is an SKA precursor – a “pathfinder” telescope. It consists of 64 dish-shaped antennas, and is temporarily the most powerful radio telescope in the southern hemisphere. MeerKAT (and Australia’s SKA Pathfinder, ASKAP) form part of SKA Phase 1.

Main photo: An image of the deep radio map covering ELAIS-N1 region, with aligned galaxy jets. The image on the left has white circles around the aligned galaxies; the image on the right is without the circles. Image supplied by Prof Russ Taylor, UCT