International Crisis Group: What’s Behind the Flare-up in Nagorno-Karabakh? 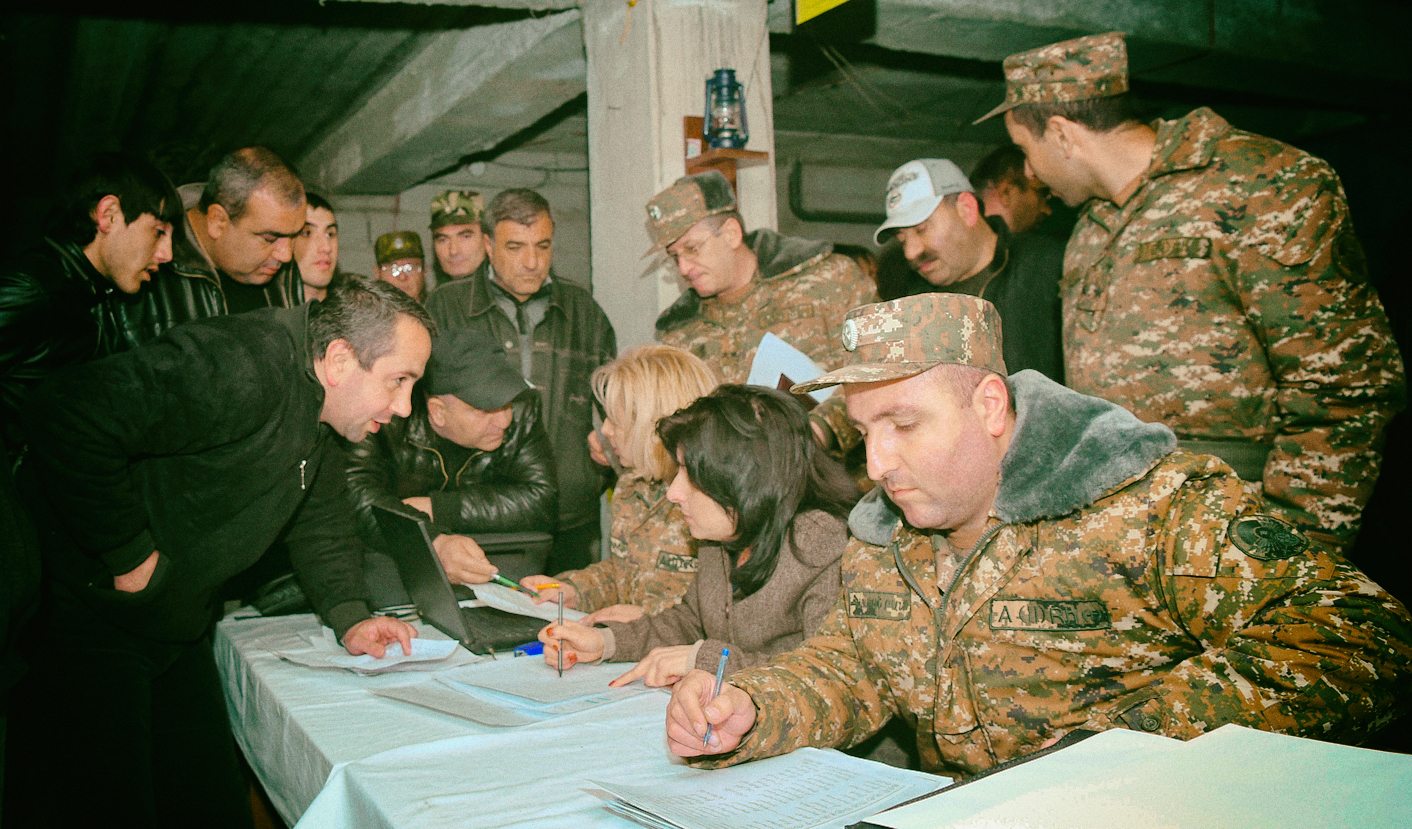 The Nagorno-Karabakh conflict has long been regarded as a tinderbox in the heart of the South Caucasus – with serious implications for the wider region including Russia, Turkey and Iran. Overview by Magdalena Grono from INTERNATIONAL CRISIS GROUP.

Each spring, when low-level violence tends to break out, policymakers worry about incidents spiralling out of control due to miscalculation or escalation by leaders in Azerbaijan or Armenia. But familiarity breeds complacency, if not contempt, which is why the international community was largely unprepared for the heavy fighting that erupted in Nagorno-Karabakh on 1 April, claiming dozens of lives.

There still is little verified information about the fighting and how it was unleashed. Each side claims it has inflicted heavy losses on the other. Azerbaijani authorities say they have reclaimed control of some strategic heights, and declared a truce on 3 April. Ongoing fighting has been reported.

This is the most serious escalation since the 1994 ceasefire in the conflict in and around Nagorno-Karabakh, a territory fought over in a war between Armenia and Azerbaijan after the Armenian majority community of this former autonomous oblast of Soviet Azerbaijan sought to unite with Armenia. For more than 20 years, the ceasefire arrangement has been fragile, with a symbolic presence of six unarmed monitors from the Organisation for Security and Co-operation in Europe (OSCE). The monitors are deployed in support of the Minsk Process, an OSCE-led effort to resolve the conflict, co-chaired by France, Russia and the United States.

Meanwhile, the past decade has witnessed a dramatic arms race between Azerbaijan and Armenia. Emboldened by its oil and gas windfall, Azerbaijan increased its military expenditure more than twentyfold between 2004 and 2014. Azerbaijan’s President Ilham Aliyev has boasted that the 2014 defence budget was twice as large as Armenia’s overall state budget. Most significant arms acquisitions came from Russia. Armenia, Russia’s traditional ally, has tried to keep up, despite being economically squeezed by a lack of development and closed borders with Turkey and Azerbaijan. But ethnic Armenian forces have maintained control of strategic heights in and around Nagorno-Karabakh, which has given it a strong advantage and rendered the overall imbalance less acute. If Azerbaijan has now taken some of these positions, this could change the balance.

European policymakers have decried the absurdity of the parallel armament. According to a high-level diplomat, Moscow seems to have been selling arms at a higher rate to Azerbaijan to effectively subsidise the lower-cost supplies to Armenia – a member of the Moscow-led Eurasian Economic Union (EEU) and the Collective Security Treaty Organisation, host of a Russian military base in Gyumri, and close partner on air defence and other military arrangements, which include a commitment by Russia to defend Armenia’s international border, if necessary.

Since the summer of 2013, security incidents have become significantly more frequent and more serious in intensity, including the use of artillery in and around civilian areas.

To understand the security situation, one has to scrutinise both the local and the regional politics. As in other conflicts in the European Union’s eastern neighbourhood, they are closely intertwined.

Azerbaijan has been desperate to regain control over Nagorno-Karabakh, or at least the surrounding seven districts also controlled by ethnic Armenian forces since the 1990s.  Hard-hit by the drop in oil prices and the devaluation of its currency, Azerbaijan faced protests last winter registering a level of dissatisfaction among ordinary citizens. The government may feel the need to rally support around the flag. Baku is also less and less convinced that diplomatic solutions will deliver results: its frustration with the Minsk Group is no secret.

Armenia itself has been under serious economic strain, especially given the economic downturn in Russia, a key trading partner, and the drop in remittances. However, for Yerevan, the status quo on the ground has been advantageous. Any diplomatic efforts to change the situation, such as via the return to Azerbaijan of at least some of the districts under Armenian control, would have to be accompanied by significant security guarantees and gains towards determining Nagorno-Karabakh’s future political status.

The recent months have seen a lot of diplomatic activity, mostly fairly opaque, by Moscow. European and OSCE diplomats say this is only co-ordinated with the other two co-chairs of the Minsk Group, France and the US – but only in part. Moscow is exploring options that draw on the basic principles for resolution defined by the Minsk Group but is likely to look for opportunities to enhance its own standing in the region. There has been discussion about a possible deployment of Russian peacekeepers. Azerbaijani diplomats have said Russia may support efforts to shift the status quo slightly and allow for some new openings, especially if Baku agrees to a closer alignment with Moscow, such as through observer status in the Moscow-led EEU.

Meanwhile, the US has been largely preoccupied with engagement in other theatres, not least in Syria. Turkey, despite its traditional alliance with Azerbaijan, is also stretched thin dealing with the fallout from the Syrian war, the refugee crisis and conflict with the Kurdistan Workers’ Party (PKK). Iran’s re-entry into the region’s politics heralds a change, though the implications are still unclear. On 7 April, the Azerbaijani, Russian and Iranian foreign ministers will meet in Baku to discuss energy issues and possible railway connections.

European diplomats involved with the Minsk Process have been worried about a serious escalation in Nagorno-Karabakh since last year. Indeed, Federica Mogherini – EU High Representative and Vice-President of the European Commission – raised the issue in Baku and Yerevan during her recent visit to the region. But without a formal role in the Minsk Group and with limited traction in its ties with Armenia and Azerbaijan, the EU’s leverage is not sufficient.

Russia may have more influence, although it does not control Baku or Yerevan and their respective militaries, and has been unable to push through a solution in the past several years despite investing domestic capital. But Moscow is more closely involved than the other outside actors, and seems to pursue its own strategic interests. Key among them is a closer link with Azerbaijan and proving its own indispensability on the regional stage as a mediator and security guarantor. Moscow will probably use its leverage to enhance its own standing in the region.

As the Minsk Group meets on 5 April to discuss de-escalation, the first priority is to stop the violence. But it is essential to get beyond the logic of damage limitation. The risks over the past years have not diminished but in fact have grown. Complacency in the face of long-understood risks should be replaced by strong political will and effective mechanisms to prevent further escalations in Nagorno-Karabakh – and indeed elsewhere in Europe’s and Russia’s shared neighbourhood. DM

Photo: Armenian volunteers receive uniforms and weapons at a military commissariat to join the self-defense army of Nagorno-Karabakh in Yerevan, Armenia, 03 April 2016. According to media reports, dozens have died during clashes that erupted on 01 April 2016 as part of a territorial conflict between Armenia and Azerbaijan in Nagorno-Karabakh Republic. Azerbaijan armed forces reportedly attacked self-proclaimed Nagorno-Karabakh Republic, which has been controlled by ethnic Armenians since 1994. Russian President Vladimir Putin called for a ceasefire. EPA/HAYK BAGHDASARYAN / PHOTOLURE