GroundUp Report: Is UCT a safe space for art? 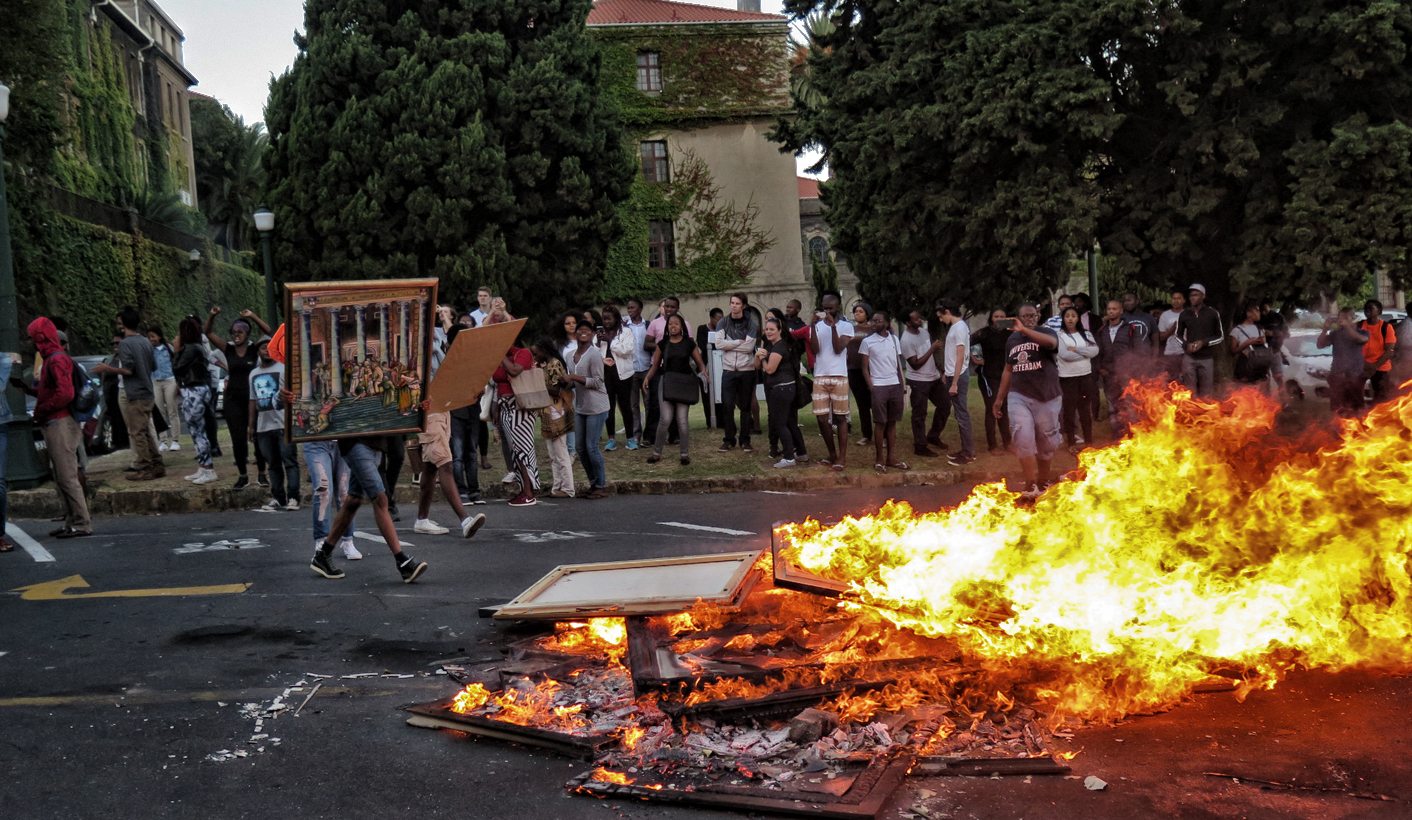 Since paintings were burnt by students in the name of the #RhodesMustFall movement at the University of Cape Town, dozens of artworks have been put into safe-keeping. Pictures that may cause offence have also been taken down. By Brent Meersman for GROUNDUP.

The University of Cape Town’s curatorial team, it seems, are not taking any chances. After the burning of 23 paintings and photographs by Rhodes Must Fall protesters on 16 February, 75 “vulnerable” artworks were removed and placed into safe custody. The burnt paintings included black struggle artist Keresemose Richard Baholo’s painting, Extinguished Torch of Academic Freedom.

Also, in January, an exhibition of photographs was removed following concerns expressed by Rhodes Must Fall.

Art collector Hans Porer, who believes “art is only served by being displayed” and has a substantial number of works on loan to the university, arranged for the removal of his works on 29 March from the Chancellor Oppenheimer Library, shortly after his annual meeting with UCT.

Usually with loan collections, written notice with a reasonable period, such as six months, must be given.

The university has 1,100 artworks in 50 buildings on five campuses by 520 South African artists. A moratorium on the acquisition and commissioning of artworks, in place since April 2015, looks set to remain.

Asked about the latest removals, Anderson would only confirm that “three pictures” were taken down, and refused to name them.

In an earlier e-mail to GroundUp, Anderson said they were “loan works restored to the collection of the owner after his annual revaluation for insurance. The removal of the works is in line with the rotation of his own collection. The owner has withdrawn and added artworks to his loan many times in the past.”

Anderson’s e-mail continued: “The University of Cape Town will not be able to state the exact reason for the removal of the artworks… The bald fact though remains that this owner has taken back only three of a very substantial number of works, which implies his happiness with the repository of his works at UCT, even in a time of transition.”

Asked which works had been removed, Anderson wrote: “The pictures in question are private property, not belonging to the university. It cannot be the business of the university to itemise the property of others.”

Set up last September, UCT Council’s Artworks Task Team was mandated to assess UCT’s art, including statues, photographs and plaques, with a view to transformation and inclusivity.

As a matter of urgency, it completed a preliminary survey, together with students, looking for “artworks on campus that may be seen to recognise or celebrate colonial oppressors and/or which may be offensive or controversial”, and specifically artworks that were found to be “offensive for the way in which they depict black people”.

Already last year, Stanley Pinker’s Decline and Fall, which makes ironic use of colonial iconology, was taken down and a Breyten Breytenbach work on loan from Porer, Hovering Dog (because the image in the foreground is a dog), was also removed. The latter depicts two nude figures – a black woman wearing a white mask sitting on the lap of a white male wearing a black mask.

According to the task team: “Unlike in the case of works hung in galleries, members of the university community are not able to choose which works they wish to encounter. The works on display are unavoidable.”

Furthermore, says the task team, “artworks are displayed in settings in which colonial-era architecture has a predominant, even saturating, presence. This is one of the many environmental factors that affect how the works are apprehended by the public that views them on a daily basis.

“Student members of the Task Team made strong representation to the team concerning what they understood to be a widespread apprehension, on the part of students objecting to the artworks, that the works’ cumulative effect in terms of the representation of black people was negative, even abject.”

The task team therefore proposed that “the core cluster of works identified as controversial be temporarily removed while the university decides on the curatorial policy that it wishes to adopt”.

According said putting the works in storage as a safety measure was also “in line” with the concerns of the task team. Curation, he writes, “can no more be undertaken oblivious to the context of time than it can ignore the space in which it must be hung or otherwise sited”.

Jacques Rousseau, chair of the Academic Freedom Committee, told GroundUp: “There are a number of artworks in UCT’s collection that could legitimately be regarded as problematic. Even so, any piece of art is potentially offensive to someone, and the very point of art is to provoke reflection and, sometimes, discomfort. It is therefore crucial that any deliberations around the potential removal of art – while being sensitive to those who feel insulted by any given artwork – are also sensitive to the rights and creative intent of the artist concerned.

“Where art is removed for the sake of prudence, in fear of it being destroyed or defaced, that removal must be provisional, and on the understanding that a full objective reassessment of the artwork concerned and what it signifies will follow.

“Furthermore, artworks need to be understood in the context of their curation. It is both possible, and often desirable, for an artwork that might be offensive in isolation to serve as a valuable spur to debate, when placed in an appropriate context.”

The Academic Freedom Committee has noted with “grave concern recent instances of threats to academic freedom” including the closing down of the photographic exhibition in January, and the disruption of a Rhodes Must Fall exhibition by the Trans Collective last month.

Rhodes Must Fall had not yet responded to a request for comment when this story was published.

GroundUp spoke to several more art experts connected to the university. None wished to be named but all expressed concern about a climate of intolerance towards art at the institution. One called for more open debate where all viewpoints on what art should be displayed at UCT could be heard. DM