Like their deadly product, Kenya’s illegal boozers go from strength to strength 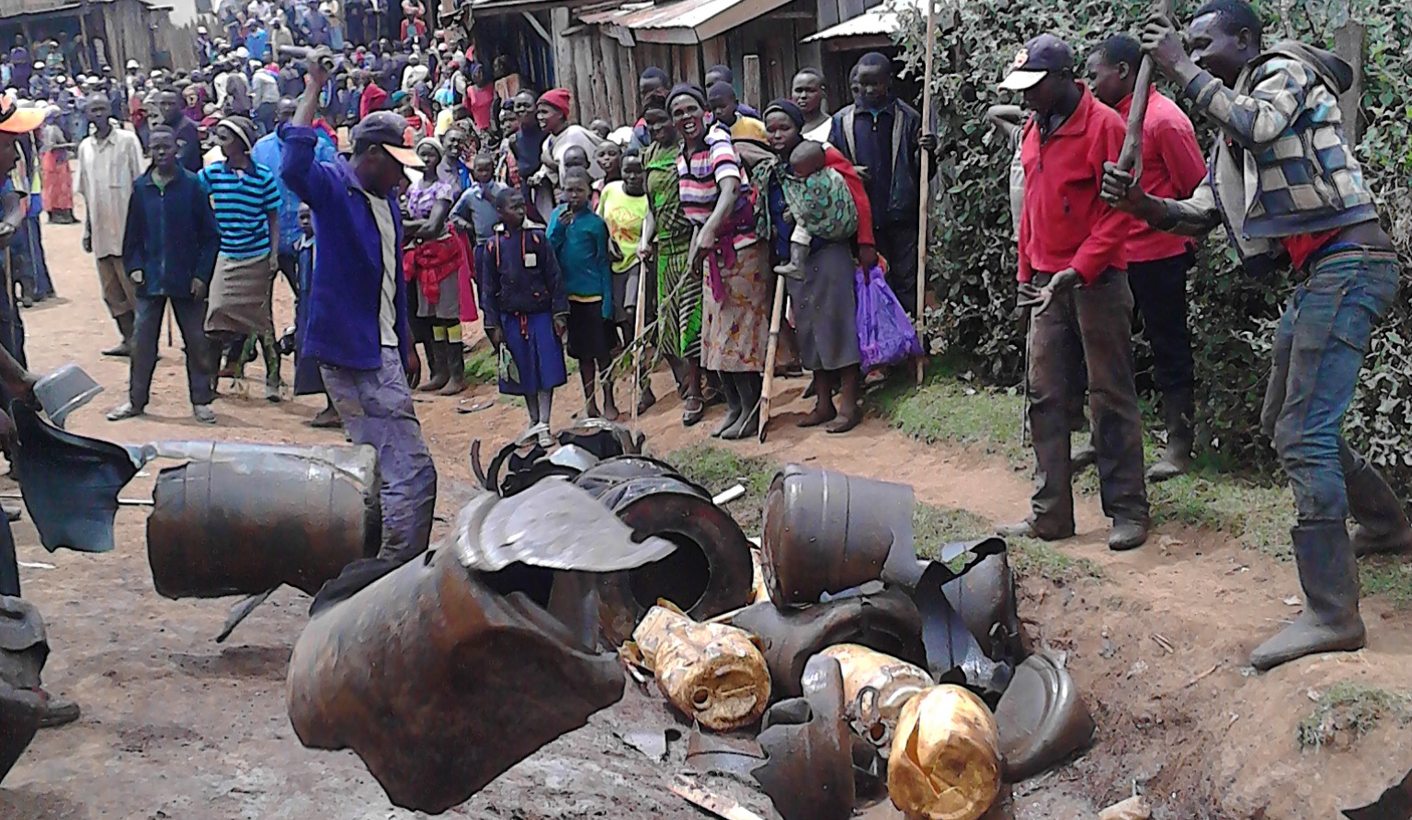 Sold in bottles in supermarkets or plastic sachets at the side of road, it’s not hard to get your hands on super-strength alcohol in Kenya. But the boom in heavy drinking has a fatal side-effect: since 2009, more than 3,000 people have died from unregulated hootch. By NJERI KIMANI.

The colourful underground world of Kenya’s illegal alcohol brewers is decorated by the similarly colourful names of the illicit liquor they produce. A sample: Flying Horse, Ferrari Movement, Napoleon and – prophetically – Kill Me Quick.

According to Kenya’s National Authority for the Campaign against Alcohol and Drug Abuse (Nacada), more than 3,000 people have died since 2009 as a direct result of drinking illegally-produced alcohol. Although this has been a problem for decades, successive administrations – from Daniel Arap Moi to Mwai Kibaki and now Uhuru Kenyatta – have failed to curb it, despite numerous crackdowns.

Kenyans’ fondness for prohibited brews emerged in colonial times, when they were forbidden by colonial authorities from drinking bottled beer. Instead, they resorted to fruit and grain-based distillations such as muratina and changaa, flavoured with local herbs. After independence, although now free to drink beer, a national shortage forced drinkers to maintain the traditional methods.

In desperation, the Kenyan government partially legalised muratina, changaa and other traditional brews in 2010. This came with caveats, however: drinks were to be sold only in glass bottles, and produced in a safe, hygienic environment. Having failed to eliminate illegal brewers, the idea was to at least regulate them.

It hasn’t worked. The legalisation has only encouraged small-scale, fly-by-night manufacturers to produce alcohol faster and cheaper. It’s often sold in informal grocery stores in plastic sachets or plastic water bottles, and can be laced with dangerous impurities such as herbicides and pesticides which help to speed up the fermentation process. To set their brew apart, some manufacturers lace their product with hard drugs such as cocaine and heroin, or up the novelty value by bottling it with strange objects inside: chameleons, snakes, rats, or even panties and bras.

It doesn’t help that, all too often, the local police and chiefs who are supposed to be enforcing the regulations are also customers of the illegal brewers (in March 2016, The Star Kenya released video footage of a uniformed policeman in Mawingu so intoxicated that he could barely stand). They can also be beneficiaries of the underground trade, taking bribes in exchange for turning a blind eye.

Increasingly, civil society anger is directed at the authorities that allow this problem to continue rather than the brewers themselves. On Sunday, 20 March 2016, more than 1,000 residents of Molo in Nakuru County marched on a police patrol base, dumping 300 litres of illegal alcohol on the building. The marchers were on their way to pour the remaining few litres over the heads of the local police and chiefs, but were stopped by a riot control unit.

As well as the police, it’s apparent that powerful businessmen and politicians are minting millions from the dangerous practice. The most egregious single example of this came in November 2000, when 140 people in Nairobi’s Mukuru Kayaba slum died after drinking Kumi Kumi (“Ten Ten” in English), named because it cost just 10 Kenyan shillings (R1.50) per serving. Another 80 people were left blind. It was the residents who led to the discovery that the drink was transported to the slums by “big cars”, whose owners were shielded by police and local administration upon paying a “protection fee”.

Politicians have also used selective implementation of the alcohol laws to further their own political interests. A July 2015 crackdown ordered by President Uhuru Kenyatta in central Kenya was characterised by looting and the destruction of property, with the politicians enforcing the crackdown allegedly targeting businessmen who had declined to support them in the 2013 elections. The violence forced Kenyatta to halt the crackdown, just one week later – but not before one person was killed during a raid on an illegal brewery in Naivasha.

As well as the obvious health risks, alcohol addiction can have a devastating effect on home life. Often, the worst-affected are married women. “Every day I take out two mattresses to dry, one for our children and the other for our husbands. Many have become impotent and this translates to low birth rates. In our kindergartens, we do not have children as the men can no longer sire any,” said Catherine Muthoni in Molo.

Jane Wanjiru, also from Molo, says women are forced to play the roles of both parents. “Many of [the men] fall asleep on the doorstep or even under the bed as they are too weak to climb it. Our houses are laced with vomit from them,” she added.

Not that the drinkers seem to care. “Ona mwahoria matawa no tuguthie na mbere kunyua,” shouted one, repeatedly, as Daily Maverick was conducting field research. Even if you put out the lights, we will continue drinking.

But as long as there’s a market for their product, and authorities that seem all too willing to turn a blind eye, the lights won’t go out on Kenya’s illegal alcohol manufacturers any time soon. DM