Analysis: The Judgment at the end of the Nkandla Road 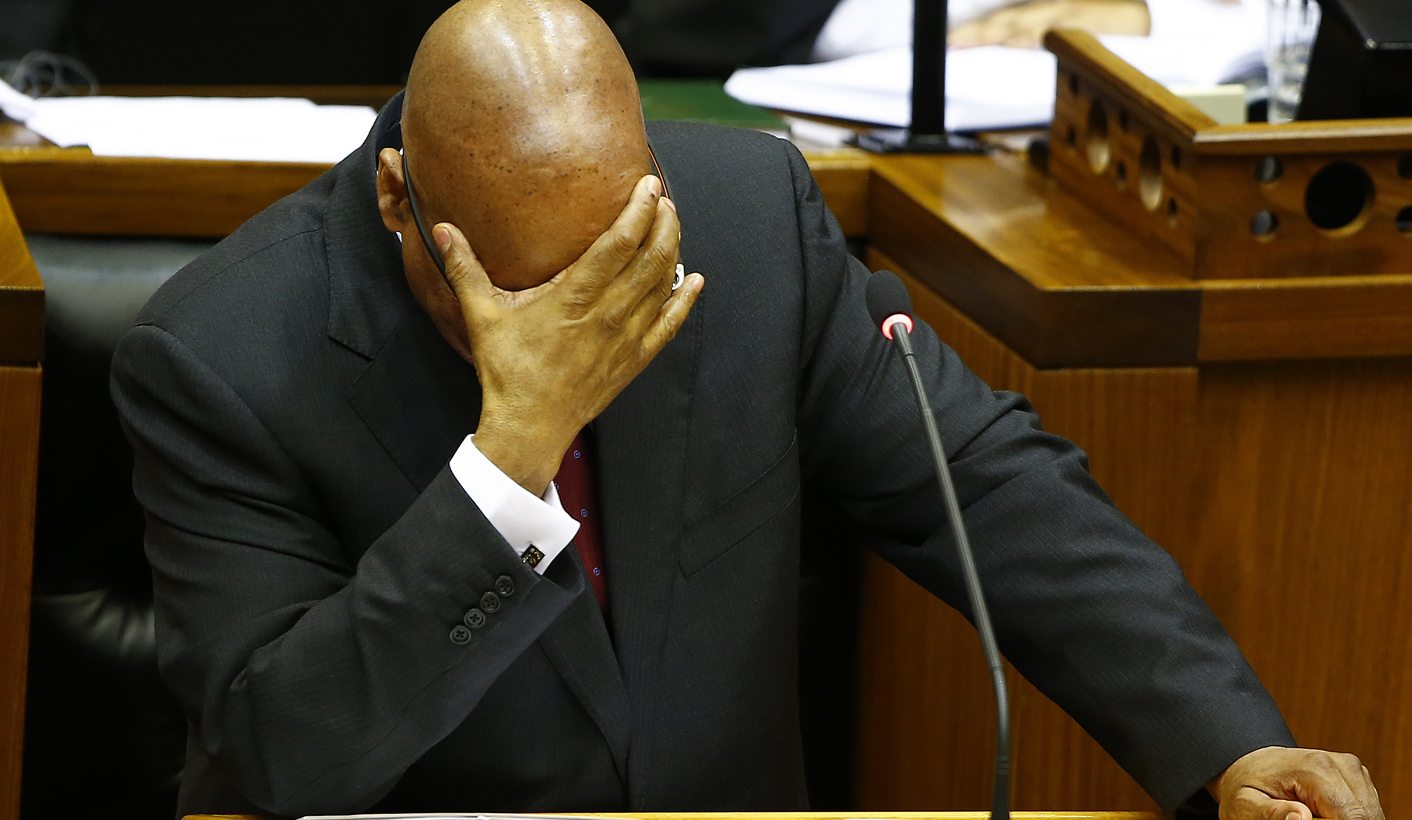 The Constitutional Court’s finding that President Jacob Zuma broke his oath to uphold the Constitution, because he failed to comply with the remedial actions as specified by the Public Protector, was unanimous and final. There is no other option, no other court of appeal, short of giving up on the rule of law and governing by might alone. To read through the judgment, to hear in one’s mind the voice of Chief Justice Mogoeng Mogoeng once again, is to be reminded just how sordid, awful, and plain illegal, the Nkandla Scandal has been all along. By STEPHEN GROOTES.

As a general rule, the Constitutional Court does not read out its judgments in detail. They are simply not that long-winded. What has become common practice over the years is for the judges to read a carefully-worded legal summary, and then release the the full text of the judgment. The court set itself a goal of trying to make its rulings as clearly written as possible, so that ordinary mortals like us would be able to understand them. So when it became clear that Mogoeng was going to read out the entire ruling, it was obvious fireworks were on the way.

The other hint was the way this was delivered. All of the judges were there. Mogoeng himself wrote the ruling, and then read out the names of the judges who agreed with him. Which was all of them. This was the Constitutional court, united, together, in total agreement on a ruling which has perhaps been the harshest yet on a sitting president. The ruling that comes close, perhaps, is the Nevirapine ruling that went against Thabo Mbeki; this ruling is surely more humiliating than that.

Mogoeng began by explaining how South Africa “adopted accountability, the rule of law, and the supremacy of the Constitution”. And then came the first indication that Zuma was going to lose this:

“For this reason, public office-bearers ignore their constitutional obligations at their peril. This is so because constitutionalism, accountability and the rule of law constitute the sharp and mighty sword that stands ready to chop the ugly head of impunity off its stiffened neck.”

This use of language, this legal poetry, delivered by a man who knows his way around a sermon, was surely deliberate. It was to explain, right at the beginning, how important all of this was. It was to tell everyone that what was to follow was justified, was correct, and is necessary. It wasn’t just the shot across the bow, it was the judiciary telling the president, you have behaved badly, and you have no justification for what you’ve done.

One of the ways the court did this was to explain the position, legally speaking, that the President holds. He “occupies a position indispensable for the effective governance of our democratic country. Only upon him has the constitutional obligation to uphold, defend, and respect the Constitution as the supreme law of the Republic been expressly imposed.” Later comes the line, “He is a constitutional being by design, a national pathfinder, the quintessential commander-in-chief of state affairs, and the personification of this nation’s constitutional project”.

For anyone who has felt that, under Zuma, the Constitution has been abused, been burned, dishonoured, denied and refused, and the government for which it stands has been scandalised throughout the land (forgive me, Johnny Cash); for anyone whose blood has boiled at the sight of him laughing in Parliament, giggling at the sight of violence in the National Assembly last year, this was a judge explaining why you had been so angry. We, as South Africans, learnt through bitter blood, how important the rule of law is to us all. This was judges explaining, in prose bordering on poetry, that we all have a right to feel that way.

The message was simple: Jacob Gedleyihlekisa Zuma, the Constitution applies to you too.

It should not be forgotten that one of the major parts of this judgment relates not so much to Zuma, but to Parliament and the National Assembly. It was this non-august chamber that voted twice to exonerate Zuma, that twice said that it was okay for him to ignore the Public Protector. That ignored the law and the Constitution in doing so. And Mogoeng and his brother and sister judges are very unhappy indeed. Parliament, say they, “is the watchdog of state resources, the enforcer of fiscal discipline and cost-effectiveness for the common good of all our people…. In sum, Parliament is the mouthpiece, the eyes and the service-delivery-ensuring machinery of the people. No doubt, it is an irreplaceable feature of good governance in South Africa.”

Talk about setting up a body, just to shoot it down when you find it failed in its duty to do all of those things.

Mogoeng kept his most vivid language for his description of the Public Protector. His homage to her, in legal chapter and verse, is that, “She is the embodiment of a biblical David, that the public is, who fights the most powerful and very well-resourced Goliath, that impropriety and corruption by government officials are. The Public Protector is one of the true crusaders and champions of anti-corruption and clean governance.” The language is clear, biblical, and unequivocal. She is on the side of right, and her duty was to clean up the wrong.

One of the logical points that Mogoeng makes is that it is obvious that the Public Protector’s findings are binding, because if “compliance with remedial action taken were optional, then very few culprits, if any at all, would allow it to have any effect. And if it were, by design, never to have a binding effect, then it is incomprehensible just how the Public Protector could ever be effective in what she does and be able to contribute to the strengthening of our constitutional democracy”. In other words, if you don’t have to follow her findings, then why bother with the office at all? Then you may as well just give up on the whole idea.

But, and it’s an important “but”, the question then arises as to whether the Public Protector has ultimate power. And, of course, she cannot. Mogoeng says her power is limited only in the same way that almost everyone else’s power is limited, by the fact that you can get a judge to review her decision. He then has to apply all of this to Zuma’s position. For him, it is pretty clear, “Only after a court of law had set aside the findings and remedial action taken by the Public Protector would it have been open to the President to disregard the Public Protector’s report.”

So, he had to go to court, or comply. Everything else was bunk. However, that was clearly not strong enough for Mogoeng and his full bench. Because, “Absent a court challenge to the Public Protector’s report, all the president was required to do was to comply”. And therefore, the finding that, “The President thus failed to uphold, defend and respect the Constitution as the supreme law of the land.”

This is the kind of ruling that, at a stroke, re-establishes the rule of law over our politicians.

All around us are people who break the law on a routine basis. Many of them are politicians, who set the example for everyone else. How many times have we seen blue light brigades breaking the speed limit, or Maseratis outside an ANC event without number plates, or someone unfit and unproper being appointed to head the National Prosecuting Authority or the Hawks? How many times have we all just shaken our heads and thought that simply cannot be right? One of the reasons so many people feel so good about this ruling is that it confirms what we’ve known all along. The man at the top doesn’t obey the law, and he has set the example for so many other people in the ANC.

What is staggering is not just that this is a hard and firm finding. It is not just that the judges were crystal clear in their language. Or that they have actually appeared to tread into the political realm. It is that they actually could not have gone any further than they have. This is the full extent of their power. And they have exercised it.

However, we should not be entirely surprised. The person who led Zuma in his oath of office, in 2014, the oath to “uphold and defend the Constitution”, was Chief Justice Mogoeng Mogoeng. For someone like Mogoeng, with his particular religious background, his word is his bond. An oath is an oath is an oath. Before God. He has found that Zuma is a different kind of man. One who does not live up to his oaths. A man that Mogoeng believes has been weighed, measured, and found wanting.

Zuma, and so many people in the ANC, have been bullshitting us for so long on Nkandla. Now they have been called on it. DM