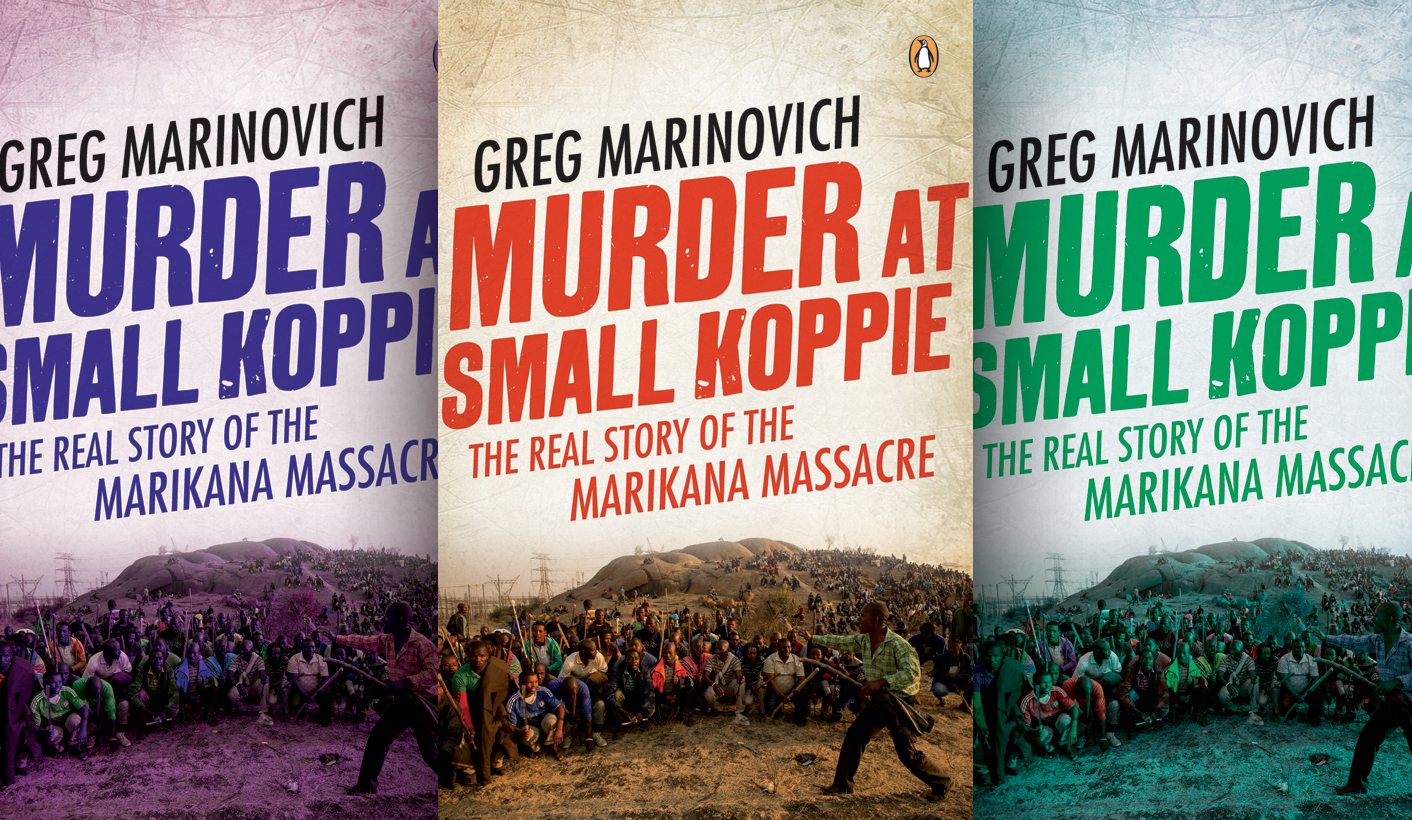 The autopsy reports of bullet wound trajectories suggest nothing less than extrajudicial executions, sinister echoes of apartheid-era death squad activities. But no summary of what happened at Marikana can do justice to Marinovich’s narrative, nor to the miners, police and security guards who lost their lives while authorities created “plausible deniability” for themselves. By ANTHONY EGAN SJ.

In January 1898, the great French novelist Emile Zola published an open letter in the Paris newspaper L’Aurore. The text, which history now calls J’Accuse, condemned the French Government for the way it had sentenced Captain Alfred Dreyfuss to life imprisonment on Devil’s Island, French Guiana, for espionage, based on the flimsiest of evidence in what amounted to a show trial motivated by anti-Semitism.

In South Africa, 118 years later, Greg Marinovich has done essentially the same with Murder at Small Koppie: The Real Story of the Marikana Massacre (Penguin Books). This time it’s the massacre of 34 striking miners at Marikana on 16 August 2012.

There are differences of course. Small Koppie is much, much longer than J’Accuse, and Marinovich is not a novelist like Zola (at least not yet). But in the passion with which he examines his subject, the way he brings together personal narrative and the dynamics of power, he stands firmly within the tradition of M. Zola.

Drawing on personal observations, interviews with participants (mainly miners) and a variety of secondary sources, he reconstructs the events that led to the killings and provides an interpretation of the socio-economic conditions that led to them, as well as the consequences that reverberate to this day. It is this masterly combination of big picture and micronarrative which will probably make this one of the definitive analyses of Marikana.

I shall not rehearse the events described here. No summary can do justice to Marinovich’s narrative, nor to the miners, police and security guards who lost their lives. Read the book. What I would rather do is extract what I learnt from this account and try to express what political agenda this raises for South Africans.

The underlying theme of this story is inequality. We see played out in Marinovich’s analysis the savagely unequal fields on which the “game” of industrial relations is played. The strike was above all about wages, exemplified by the fact that the CEO of Lonmin earned more than 200 times the salary of a striker. We see too how this occurred with either the overt or implicit support of a government led by a supposedly left-wing ruling party, the African National Congress, some of whose top members had considerable financial interests in Lonmin itself.

Industrial disputes today are not simply a crude “labour vs. capital” but play out as labour versus capital plus the state (including the state’s monopoly of coercive force). Marinovich also sketches the rather dodgy pedigree of Lonmin. Rooted in the late Tiny Rowland’s sanctions-busting and dictator-cultivating Lonrho (while also courting national liberation movements in southern Africa before and after uhuru), the company has – Marinovich claims – failed to live up to the social and labour plans Lonmin had submitted to obtain its mining licence. Government should have long ago held them to these conditions; it apparently turned a blind eye. Which poses another question: could this be because the ANC leadership’s financial interests in Lonmin trump (an apt word, perhaps, if we look at contemporary global politics) the interests of its supporters in places such as Marikana?

The grimness of Lonmin miners’ conditions is brilliantly conveyed by Marinovich’s accounts (and photographs) of their daily lives. Beyond the dangerous work (a situation common to mining almost everywhere), the poverty in which the miners live is apparent: pathetic housing, lack of water and sanitation – all of this contrary to what government officially requires of mining companies. Add to this low salaries that have to support on average of eight or nine people, with the result that most miners have to resort to loan sharks each month to get by. It is the stuff that makes revolutions.

A second theme that weaves in and out of the narrative is trade unionism in contemporary South Africa. The dominant union federation, the Congress of South African Trade Unions (Cosatu), with the National Union of Mineworkers (NUM) as its presence among miners, is part of a tripartite alliance with the ruling ANC. The sense one gets from this book (and echoed in other writings by scholars aligned to the labour movement) is that Cosatu and the NUM leadership have been largely co-opted by big business and the ANC. The emergence of Amcu – the Association of Mineworkers and Construction Union – is a measure of dissatisfaction on the ground with this alliance. The result at Marikana was an ideological and often violent battle for the allegiance of workers.

Here Marinovich opens up (but doesn’t address in detail) a set of issues that unions themselves need to examine. The idea of “one industry, one union” aligned to a giant social movement union federation may have been necessary in a past where labour’s primary goal was national liberation. (Whether that should have been its primary task is another debate). In a democratic society this may no longer obtain, particularly where the federation is a junior partner in an alliance with a ruling party that is effectively aligned with big capital. The notion of multiple unions in the same industry – with varied or even no formal political affiliations – may be more effective, particularly where the different unions have as their goal the common good of their constituency.

The third, overarching, theme of the book is violence. It is implicit in the theme of inequality – the structural conditions that keep people poor – and explicit in the analysis of trade unionism. The narrative of violence is graphic and disturbing; though the police emerge as the worst perpetrators, none of the players emerges as pure. The running battles between police, security guards and strikers in the prelude to August 16 illustrate the latter.

It is a truism that violence breeds counter-violence. Behind this, alluded to by Marinovich in an almost throwaway aside, is the observation that strikes in South Africa tend to be violent. This needs to be addressed and resolved. One seldom hears of a major strike where someone is not intimidated, assaulted or killed. This happened at Marikana, where many strikers were armed with sticks, spears, axes and knives, and is most graphically depicted in the book by the murder of security guards and an alleged NUM “spy”. Leaving aside media exaggeration, this would seem to me counterproductive on two counts. First, in a society battered by a culture of violence, it undermines sympathy for labour’s cause that most reasonable people could endorse. Second, violence provides the “justification”, the metaphorical and real ammunition, for state crackdown.

Marinovich’s analysis of police action at Marikana is the most disturbing part of the book. Whatever the provocation of the previous days, the denouement at Wonderkop and Small Koppie constituted massive overkill. The channelling of the strikers into a narrow area and the use of R5 assault rifles (some of them on fully automatic) at 30 metres range remind me of a hunting term – a “turkey shoot”. Basic ballistic knowledge should tell anyone, especially security forces, that this is a lethal combination. Based on Marinovich’s account it is perhaps surprising that more people weren’t killed. What happened at Small Koppie, away from the media, is even more disturbing. The autopsy reports of bullet wound trajectories suggest nothing less than extrajudicial executions, sinister echoes of apartheid-era death squad activities. In the days that followed, police actions – arrest, interrogation and torture of suspects, and the “accidental” killing by rubber bullet of an outspoken local councillor – have a similar resonance.

Behind all this, Marinovich recounts how authorities turned off their cellphones, wiped parts pertaining to Marikana off a recording of a security meeting, and generally made themselves unavailable: one can only conclude that they created “plausible deniability” for themselves. He notes too how witnesses at the Farlam Commission offered contradictory evidence or simply dodged hard questions. The problem with all this is that without proper resolution there can be no closure, let alone justice.

And all the conditions that created Marikana – inequality, violence, tensions in unions, the cosy ties between business, ruling party and organs of state – remain. It seems realistic to ask not whether there’ll be another Marikana, but when?

Greg Marinovich may be accused of bias – I doubt he’d deny it. One might quibble about the inevitability of inequality, hopefully with the rider that a good society always seeks to minimise the gap between rich and poor. One might enter into debate about the use of violence during strikes (which I alluded to briefly). One might engage about the limitations of public order policing, the competence of authorities or the fear of police facing a mob. But one cannot deny that Marikana was a grave injustice, a blot on democratic South Africa.

For challenging us not to forget, Marinovich deserves our praise. He stands in the great tradition of South African and international investigative journalism. In his concern for justice, he stands with Emile Zola. DM