State Capture: Going gets tough for Zuma and the Guptas 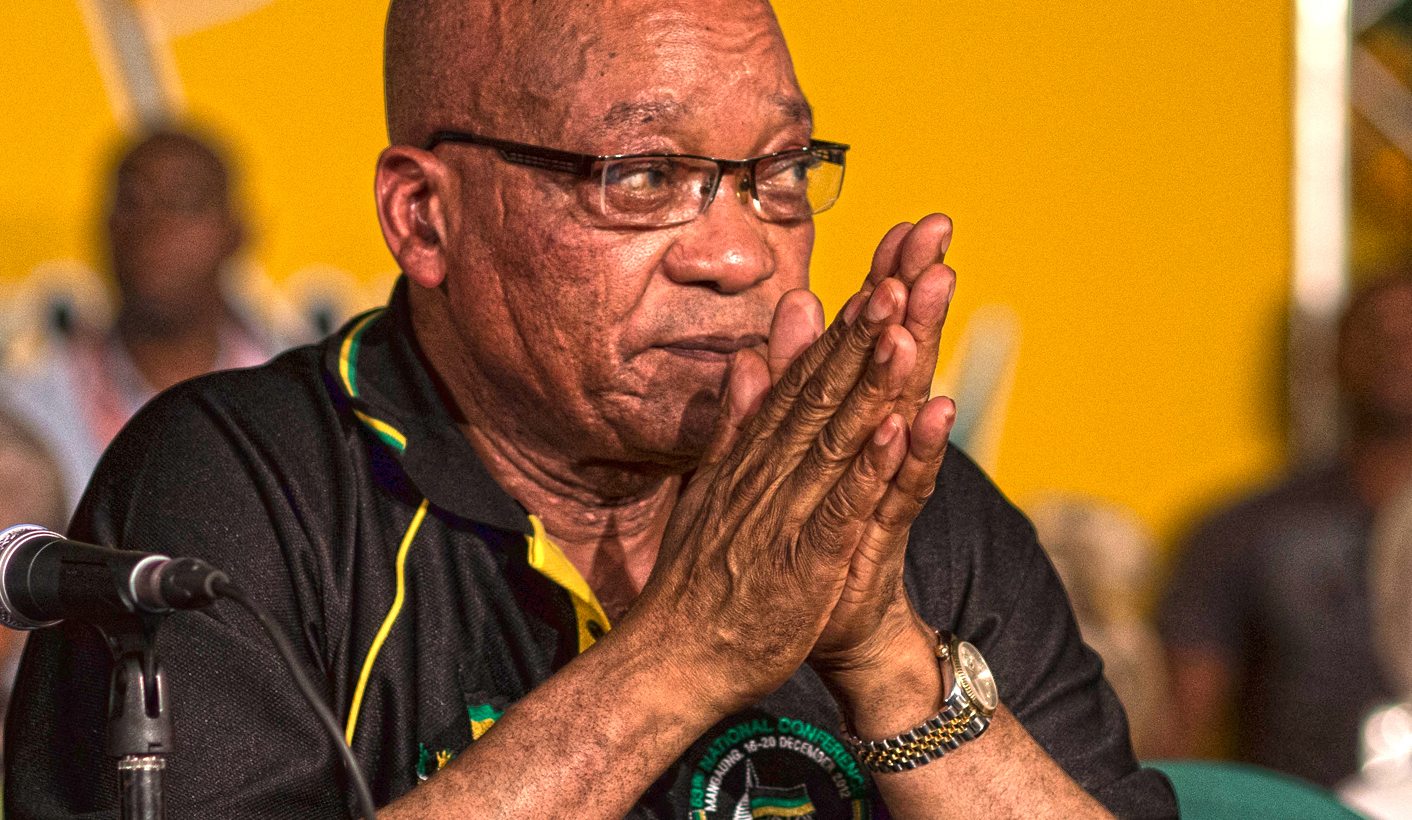 A week ago, President Jacob Zuma and his friends, the Gupta family, were riding high. They were planning a Cabinet reshuffle, with another relatively unknown person installed into a strategic position ready to toady to the whims of the Guptas. But as the cliché goes, a week is a long time in politics. Mcebisi Jonas’s revelation about the Guptas plan to promote him to finance minister prompted a chain of events that has backed Zuma and his notorious friends into a corner. They are now facing heat from multiple fronts. The Guptas now have to tread carefully and it seems Zuma’s tactic of playing victim is bombing out. By RANJENI MUNUSAMY.

It will be interesting to see whether The New Age business breakfasts continue to attract the procession of Cabinet ministers as guests as they have done over the past few years. The scheme to parade high flyers in government and the ANC has allowed the Guptas to show off their political connections and gave them a steady stream of income from the state and parastatals through advertising and sponsorships. Both the ANC and government have indulged the Guptas on the breakfast briefings without questioning whether this was an effective communications mechanism or whether they provided value for money.

Finance Minister Pravin Gordhan was the first person in government to buck the trend when he refused to speak at post-Budget breakfast briefing hosted by The New Age. This, together with revelations about how the Guptas allegedly bully people to do their bidding, should embolden other ministers and government officials to decline their approaches in future. The Guptas no longer wield the unfettered power they used to enjoy, through their relationship with Zuma and business deals with his son Duduzane.

They have been brazen in their actions in the past because their proximity to the president made them untouchable. But now, both the president and the Guptas are under scrutiny by the ANC, and possibly the Public Protector. The ANC announced its decision to investigate allegations of “state capture” by the Guptas after its national executive committee (NEC) meeting at the weekend. The Office of the Public Protector is requesting additional funding from National Treasury to take on an investigation into the Gupta matter requested by the Dominican Order in the Catholic Church and Democratic Alliance leader Mmusi Maimane.

Can the Gupta brothers now take the chance of summoning members of Cabinet or Parliament to their Saxonwold compound when there is a danger they could be recorded and the evidence made available to the ANC or the Public Protector? An even worse scenario for them is if the invited guest arrives at the meeting accompanied by ANC secretary general Gwede Mantashe.

As far as awkward encounters go, that would rank above Pravin Gordhan and Tom Moyane getting stuck in a lift together.

The decision by the ANC NEC to mandate its top six officials and the national working committee (NWC) to investigate the “serious allegations” and “purported influence” of the Gupta family finally opens a channel for the ANC to deal with the issue it has turned a blind eye to. The ANC has also issued an open invitation to its members to bring evidence to Mantashe’s office of any impropriety by the Gupta family.

An investigation at this level is unparalleled. The ANC usually assigns task teams to deal with problem issues, such as trouble in the provincial structures or even when its ally Cosatu was besieged by infighting. For the ANC to assign the president, deputy president, national chairperson, secretary general, deputy secretary general and treasurer general plus the 20-member NWC to a single issue is unprecedented. It shows the seriousness with which the ANC is treating the matter.

The mounting evidence against the Guptas makes the issue impossible to ignore. Apart from the revelations by Deputy Finance Minister Mcebisi Jonas, former ANC MP Vytjie Mentor and former Cabinet spokesperson Themba Maseko, the ANC is also aware of a number of other people, including serving and former Cabinet ministers, whom the Guptas tried to strong-arm. The latest person to indicate their willingness to provide information to the ANC is former energy and transport minister Ben Martins. The NEC wants all this information to be gathered and “appropriate action” to be taken. This action will only be able to be determined once the ANC has established who is guilty of what.

Since the evidence is being presented to the secretary general’s office, the Guptas will not know who is involved and cannot challenge the information unless they are given the opportunity to respond. With Mantashe being given the discretion to process the evidence, he might not indulge the Guptas with the right to respond. This is not a judicial process, which would have afforded the Guptas that right. So despite the Guptas continued close relationship with Zuma, he cannot really help them wriggle out of this problem.

Zuma did however try to wriggle himself out of the problem. In Parliament last week, Zuma said the opposition should ask the Guptas and Jonas about the alleged offer they made to the deputy minister as it was not his business. At the NEC meeting, Zuma tried to play his favourite victim card, saying people were using the Guptas to attack and campaign against him. He also said that if people did not want him as their president, they should be open about it rather than running a campaign against him.

While in the past, Zuma’s claims of victimhood caused people to rally behind him, NEC members say his ploy is now rather transparent. There is also a reluctance for people to rush to his defence after the Nkandla fiasco and Zuma’s about turn in the Constitutional Court.

Zuma will have to be cautious as he cannot tell what can come up in the Gupta investigation. He might genuinely not know what exactly the Guptas have done using his name but cannot plead ignorance when he disregarded all the warnings he had been given about the family abusing their relationship with him. Zuma also told the NEC meeting about how the Guptas had come to his son’s aid when Duduzane was unable to get a job.

But one NEC member said they would not fall for Zuma’s pity party again. “How many people are unemployed in this country? It doesn’t mean if they (the Guptas) give your son a job then you must hand over the country to them?”

The explanation also did not fly with the ANC’s alliance partner, the South African Communist Party (SACP). SACP second deputy general secretary Solly Mapaila called for the Zuma to “terminate” his relationship with the Guptas. In a speech at a SA Clothing and Textile Workers Union conference on Monday, Mapaila said he SACP welcomed the ANC process to investigate the Gupta’s “corporate capture”. He said the relationship between Zuma and the Gupta family had been “contaminated”.

“It is abused and has thus become poisonous. It is unhelpful both to the ANC and our people as a whole. What we have called for – and reiterate – is that the president must terminate it,” Mapaila said.

The ANC has become consumed with the issue, having to meet representatives of the Oliver and Adelaide Tambo Foundation, the Nelson Mandela Foundation and the Ahmed Kathrada Foundation following a joint letter they sent to the NEC expressing their “deep concern” about state capture. ANC spokesperson Zizi Kodwa said in a statement the engagement between the ANC and the foundations was “cordial, frank and robust”. He said there would be a follow-up discussion on the matter, meaning that the foundations were not willing to let the matter go and simply leave it in the hands of the ANC.

Kodwa said the ANC also met with representatives of The New Age and ANN7, which belong to the Gupta family. The outcome of this meeting is not yet known but there is apparently deep anger in the ANC about the reports of the newspaper and television station in the run up to the NEC, particularly their claims about a conspiracy to remove the president from office and naming ANC leaders allegedly plotting against him.

The management of The New Age and ANN7 is apparently desperate to get back into the ANC’s good books, with editor-in-chief Moegsien Williams saying in an interview on his television station that they had done the report claiming there were “generals” and “rebels” in the NEC in order to “help” the ANC.

The Guptas have welcomed the investigation mandated by the NEC and said they would co-operate fully with the office of the secretary general. “We welcome this process which should ultimately allow the truth to be recognised and end this current trial by innuendo and slander,” the family said in a statement.

But whatever the Guptas and Zuma might think of the turn of events, they cannot simply return to treating South Africa like their joint fiefdom. They have no way of telling who might come forward next with information about the Guptas bullying, trying to exert influence or offers Cabinet posts in exchange for favours for their businesses. They also cannot dictate the terms of the ANC or the Public Protector’s investigations.

To add to their troubles, the Guptas might encounter defiance from members of Cabinet and government officials when they next try to summon them to their Saxonwold home. Their media outlets have been exposed as their personal propaganda arms driving a political agenda to favour a faction in the ANC.

Zuma knows that he has been badly exposed and will be wary about making any more sudden changes to his Cabinet. The president must also be aware now that a growing number of people in his own Cabinet and in the NEC do not trust him. His political capital is diminishing.

The genie is out of the bottle and all the Guptas and Zumas cannot put it back in. They have lost their leverage and in time, they could find that they have lost power. If anything can put a strain on their special relationship, it will be that neither can get anything out of it. DM