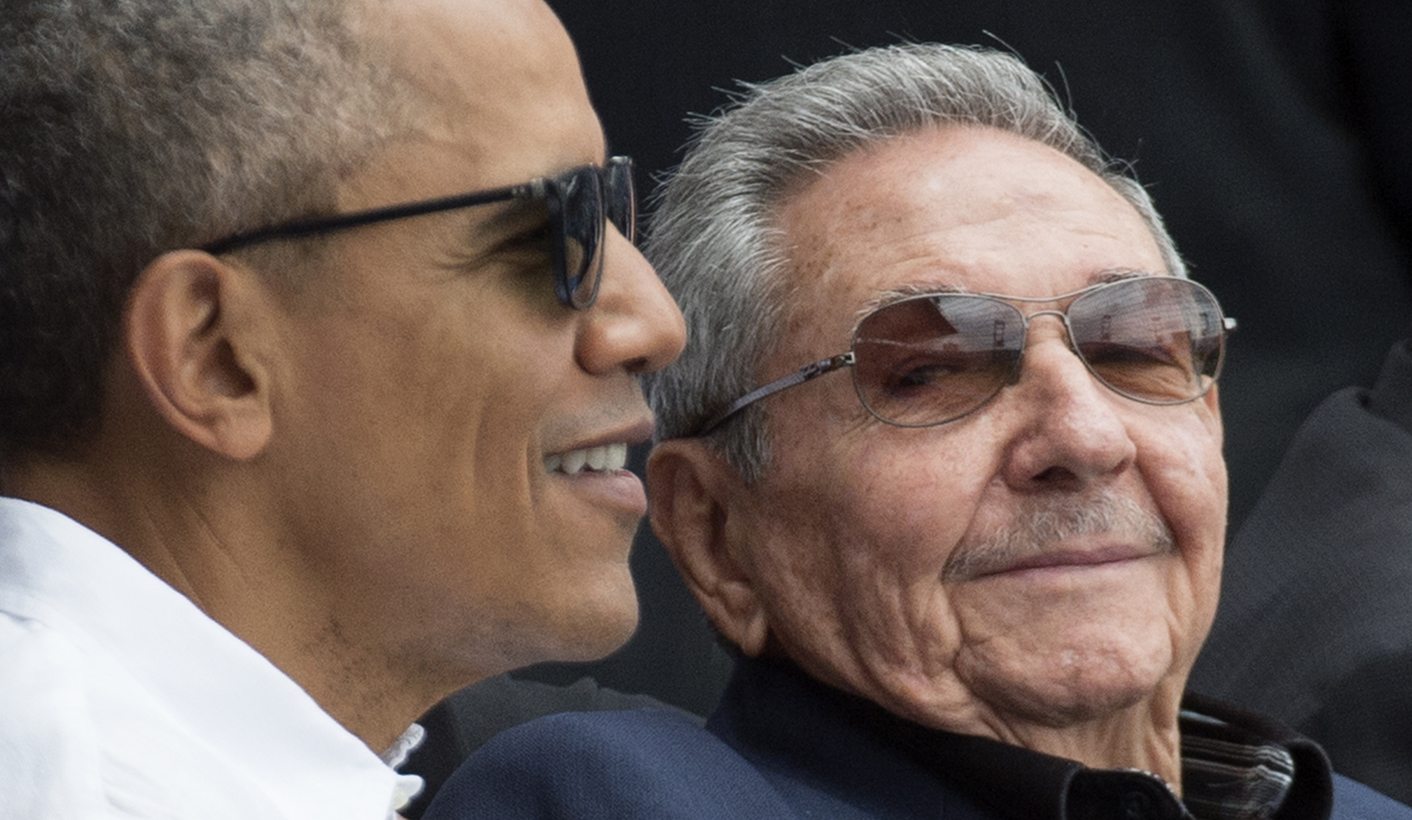 At the time of writing, US President Barack Obama and his family have nearly completed the first US presidential visit to Cuba since Calvin Coolidge cruised to the island, way back in 1928. This current trip comes as the two nations had just recently resumed diplomatic relations that had been sundered in 1961, in the midst of the Cold War, shortly after Fidel Castro’s revolutionary insurgent band that had overthrown Batista’s corrupt dictatorship in 1959 had then turned sharply to the left politically. (Cuba had been a Spanish colony for four centuries and its suppression of a local revolt – as well as a scarcely repressed desire by many Americans to annex that island – led to the Spanish American War in 1898. Thereafter, Cuba achieved full independence in 1903, and the US gained a small colonial empire from the war, including the Philippines, Puerto Rico and Guam.)

Post-1959, a variety of things had progressively conspired to thwart any possibility of a relationship between the two countries until 2015. These have included American economic sanctions (usually called a blockade by the Cubans to emphasise the belligerence towards them represented by such a policy); a failed, covert, CIA-supported invasion of a force of Cuban emigres that had landed at – and were then defeated at – the Bay of Pigs in 1961, and then the secret placement of Soviet nuclear armed IRBMs in Cuba in 1962 in order to alter the global nuclear balance (and offer a protective shield against any future invasion) that brought the US and USSR as close as they ever came to nuclear war.

On the other hand, there were continuing Cuban efforts to export its revolutionary ideology and guerrilla action to various countries in Latin America, as well as its participation militarily in Angola’s civil wars and resulting clashes with South African forces operating in the region at the height of the Cold War.

Then there have been those sudden Cuban immigrant flows, fleeing Cuba on rickety boats, rafts and even rubber dinghies, as well as the tensions that came to the fore following a very unpopular repatriation back to Cuba of one small, frightened boy, Elián González – all of which helped harden attitudes in America towards Cuba’s government and its repressive policies on economic, personal and political liberties.

There has also been that small matter of the US naval facility at Guantanamo Bay, under permanent lease to the US by Cuba. This arrangement is a holdover from the US’s treatment of the Caribbean Sea basin as a kind of private preserve of the US in the early 20th century – as well as the base being where close to 200 Muslim extremist insurgents remain incarcerated, a carryover from the “War on Terror”.

Along the way, the US Congress continued to tighten the economic sanctions noose around Cuba, most notably via the Helms-Burton Act, even though the US could easily be a natural source of Cuban imports of food, fuel and machinery. This latter act, signed into law by President Ronald Reagan, explicitly tied ending the embargo to successful negotiations to compensate Americans for property in Cuba that had been expropriated by the Castro government and for political changes on the island nation.

Over time, the Cuban-American community continued to grow sharply in South Florida. As they increased in numbers from waves of migration and then increasingly became voting citizens and an economically prosperous community, they grew in political heft, especially via well-motivated right-wing political advocacy groups and as a power centre in the Republican Party. Elected officials such as Senator Marco Rubio increasingly came from that ethnic quadrant. Accordingly, it became an article of faith in American politics that the Cuban-American community steadfastly backed the continuing isolation of Cuba, and stridently opposed any diplomatic rapprochement with its government.

But, wait long enough, and everything eventually changes in politics. The Obama administration, now facing its final months in office, has been increasingly anxious to wrap up a whole roster of diplomatic and international initiatives around the world. There is a real sense of important, unfinished, pending business, as the feeling of a clock about to run out increasingly pervades this administration.

Chief among these has been the P5+1/Iran nuclear deal, the climate change treaty, and, perhaps most of all, the re-establishment of relationships with that neighbour only 145km away, just across the Florida Strait. (Conclusively achieving a better working relationship with Russia, ending American participation in the fighting in Iraq and Afghanistan, as well as achieving any sort of forward map to a broader Middle East peace process, including Syria and Israel/Palestine, have now all largely slipped away and sadly been shovelled into that intractable pile.)

Some time earlier, however, a few executive decisions to test the waters on Cuba took place, such as making travel there somewhat easier, and clever minds noticed a relative lack of real vociferous opposition, despite some strong words from a number of Republican congressional figures. Then came quiet co-operation between US and Cuban medical teams in West Africa dealing with the Ebola virus, as well as some nudging from the Vatican towards a connection, as well as that well-documented handshake moment between Obama and Cuban President Raul Castro at the Mandela memorial service in South Africa.

Nothing ventured, nothing gained. Late last year, the two nations agreed to reopen diplomatic relations and it became clear a US presidential visit would soon be in the offing to lock down this new beginning.

And so there are now this week’s extraordinary events in Havana.

Cubans have reportedly been delighted to see the US First Family, even if only for a fleeting glance as a motorcade glides along, or to see some of the 40 members of Congress, aides and business figures wandering around the city.

The joint media conference between Castro and Obama had the entire world watching in surprise – especially as some of those typically impertinent American reporters sharply questioned Castro about his government’s repression of dissidents, eliciting somewhat chagrined responses from Castro. And, of course, the two leaders used that moment to set out their respective markers about what they wanted to see in normal relations, going forward. These included an end to that noxious embargo and the return of the entire Guantanamo base; and the opening up of the space for freedom of expression in the Cuban media and for its NGOs, as well as the growing liberalisation of Cuba’s economy.

None of these maximal positions will come easily – if at all – any time soon. While the Obama administration has taken steps to free up some travel, communications, categories of investment and the like, the US Congress is not about to repeal the key provisions of six laws that keep the embargo in place until there has been deep, fundamental change in Cuban domestic policies.

Nor, too, is the US government about to reconsider that lease in perpetuity that it now holds on Guantanamo (although the Obama administration continues to attempt to wriggle its way forward to shutting down those controversial incarcerations there). Meanwhile, for Cuba to loosen substantively all those social, political or economic controls too far, too fast would be virtually tantamount to consigning its current government to the history books.

Still, in Obama’s remarks at the leaders’ joint media conference, in his speech on Tuesday that was broadcast live in Cuba and in the US from the Gran Teatro de Alicia Alonso (named after the country’s internationally acclaimed dancer-choreographer), in his private meetings with dissidents, and perhaps even via his attendance at a real baseball game between the Cuban national team and the American pro team, the Tampa Bay Rays, won 4:1 by the US team, Obama is aiming to do just what he did years earlier in Accra and Cairo – to talk beyond current, ageing leadership and, instead, speak to the generations of the future, this time in Cuba.

And just incidentally, this being an intensely political year in America, he may also be helping keep Florida in the Democrats’ column for the presidency, come the November election, via this visit. Despite all those old verities about their antipathy towards relations with Cuba, survey data now says younger Cuban-Americans actually look forward to better relations with the island, as does, increasingly, the nation as a whole.

Moreover, American business leaders are eager for new markets for US products and new investment opportunities in sectors such as tourism – and Cuba may be very well-positioned for just such efforts. One US hotel group is already moving to take on the management of several stately, but run-down, Havana hotels.

Last but not least, American baseball fans and the lords of US professional baseball can see the potential for millions of new fans and the breeding ground of future new stars who will no longer have to sneak out of Cuba secretly on a waterlogged raft in order to get a chance to play in the “big leagues”. DM

Photo: US President Barack Obama (L) and President of Cuba Raul Castro (R) attend a Major League Baseball exhibition game between the Tampa Bay Rays and the Cuban national team at the Estadio Latinoamericano (Latin American Stadium) in Havana, Cuba, 22 March 2016. Obama is on an official visit to Cuba from 20 to 22 March 2016, the first sitting US president to visit since Calvin Coolidge 88 years ago. EPA/MICHAEL REYNOLDS.