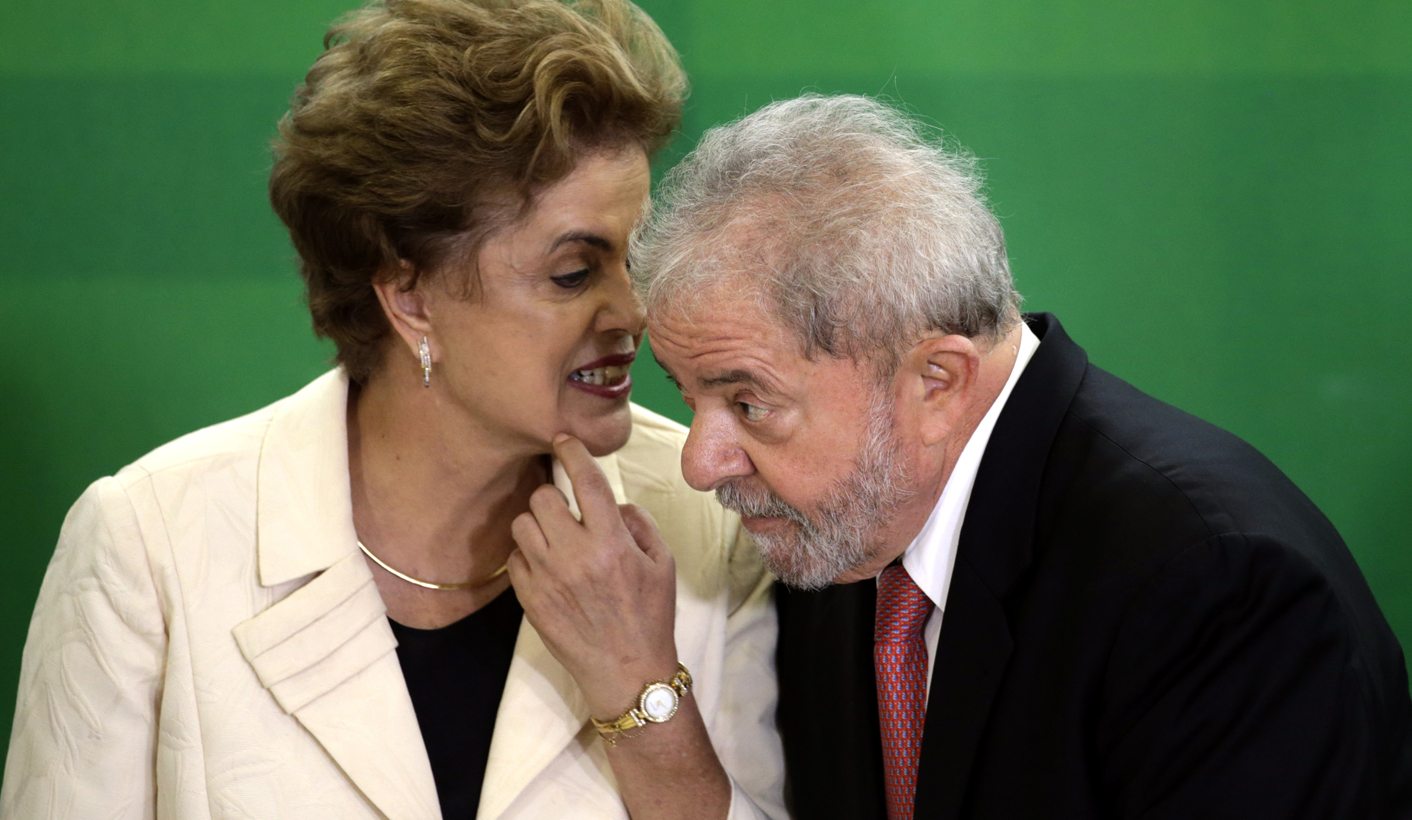 Jacob Zuma is not the only BRICS leader staring down the barrel of an early retirement. President Dilma Rousseff is struggling to keep a lid on tensions in Brazil, and must fight impeachment proceedings in parliament. Although the contexts are vastly different, there are also plenty of similarities between Brazil and South Africa's political crises. By SIMON ALLISON.

The BBC is calling it “the most tumultuous week” in politics since the return of democracy. The Observer is talking about a “governance meltdown“. Local journalists are even harsher about a political corruption scandal that that has engulfed the government, threatening to unseat even the president: “It is like being trapped in a recurring nightmare. Just when you think that the country has reached rock bottom, it sinks to a whole new level. And from there it goes on to plummet even greater depths,” wrote one.

They must be talking about South Africa, right?

Wrong. This time it is Brazil in the headlines for all the wrong reasons, although the parallels between Guptagate and Brazil’s so-called Operation Car Wash are hard to ignore.

Although the seeds of this scandal were sewn decades, or even centuries ago, in Brazil’s long history of exploitative leaders and crooked businessmen, it only burst into the open in 2014 when state investigators started looking into links between the ruling Workers’ Party and a multi-billion dollar corruption case. The case centred on Petrobras, the state-run oil company, which was accused of dishing out inflated contracts to construction companies, who in turn paid out generous kickbacks to Petrobras executives and politicians from across the party spectrum. The investigation was dubbed Operation Car Wash, because car washes at petrol stations were supposedly used to launder money.

This month, investigators followed a trail of plea bargains and convictions right to the door of the immensely popular former president Lula da Silva. Lula is credited with turning Brazil’s economy around and implementing a successful pro-poor program, but he was – allegedly – also helping the dodgy corruption cartels launder money. He was placed under formal investigation and hauled in for questioning.

Investigators also tapped his phone. When they listened in, they heard current President Dilma Rousseff – Lula’s successor and protege – offer him a job, as her chief of staff in cabinet. Not coincidentally, this job would give Lula a significant degree of legal protection from prosecution – to be used if “necessary”, said Rousseff. The cabinet appointment was swiftly suspended by the Supreme Court, and Rousseff herself now faces impeachment (the impeachment is actually on a different charge, but the political momentum against her now gives it a far greater chance of success).

Cabinet appointments being used to protect and promote narrow self-interests. A ruling party in bed with prominent business interests. Malfunctioning state-owned enterprises operating for personal rather than public benefit, set against a backdrop of a declining economy and a weakening exchange rate. Sound familiar?

Where Brazil differs from South Africa, however, is in the very public response from ordinary people on both sides of the political divide. Last Monday, an estimated three million people took part in more than a hundred anti-government protests across the country. Local newspapers described it as the largest political protest in Brazil’s history. As these continued this week, Rousseff’s supporters responded in kind, with mass rallies drawing hundreds of thousands onto the streets.

In contrast, “about 20 people” demonstrated against President Jacob Zuma at the meeting of the ANC’s National Executive Committee on Saturday.

Of course – and again like its BRICS partner South Africa – Brazil’s story is a lot more complicated than it seems at first glance. As inspiring as its display of people power may have been, it was also a display of the country’s unresolved social and racial history.

“The almost exclusively white, middle class demonstrators who have been demanding the removal of President Rousseff and the jailing of Lula have a long-held enmity towards the Workers’ Party and its left wing economic policies. A small minority of protesters at anti-government events also openly call for a return of military rule. This is still, despite the gains of recent years, a country with deep divisions between rich and poor, black and white. At pro-government rallies, the crowds are mixed-race and largely from working-class backgrounds – people who have benefited in recent years from those innovative welfare polices.”

In other words, there’s a nasty anti-poor sentiment that’s fuelling at least some of the anti-government protestors, along with the kind of structural racism that both Brazil and South Africa know so well.

These are dangerous, uncertain times for Brazil. President Rousseff and her government are fighting for their political lives, but there’s no guarantee that a replacement will be any better – after all, most of the political establishment is implicated in the Operation Car Wash scandal. And as tensions rise, so the country’s traditional faultlines – class, race, wealth inequality – become more pronounced.

But all is not lost. While it’s tempting to write off Brazil’s democracy as a failure, it is actually the checks and balances built in to the system that are staving off complete disaster. Those investigators who uncovered the Petrobras fraud are, by design, independent of the executive, so that they have the power to chase after presidents if necessary (although they too have been criticised for being overzealous and politicised). A similar story played out in South Africa, where various institutions of state – most notably the Public Protector, and now the Ministry of Finance – have refused to toe the Gupta-sponsored line.

But even if the worst fears of citizens and commentators are unlikely to be realised, so too are their hopes and dreams. But ongoing political crises are hardly a recipe for progress. As Brazilian journalist Eliane Brum observed, in comments that apply equally to South Africa: “When you tear yourself away from the news to go to the toilet, the risk is not that Brazil will have changed when you get back in front of the TV, but that yet again it will be business as usual.” DM

Photo: President of Brazil, Dilma Rousseff (L) with her predecessor, Former President of Brazil, Luiz Inacio Lula da Silva (R), as she swears him in as the new Chief of Staff Minister, in a ceremony held an Planalto Palace in Brasilia, Brazil, 17 March 2016. EPA/FERNANDO BIZERRA JR.