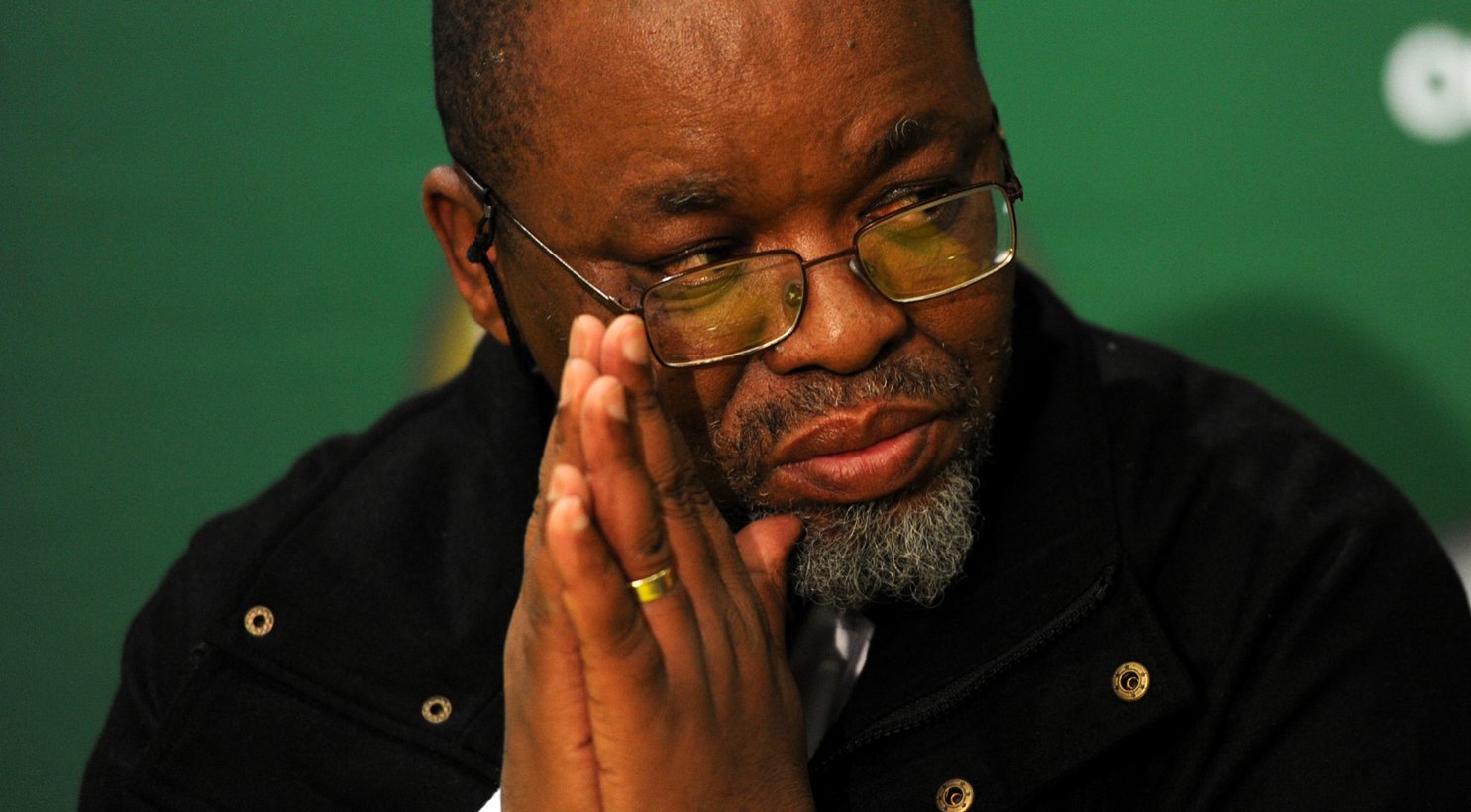 Just the fact that the ANC's National Executive Committee (NEC) was going to report back on Sunday, just as it finished its meeting, was proof enough of its importance. By breaking away from the tradition of the Monday post-NEC briefing, Gwede Mantashe was tacitly conceding that he could not allow any leaks. And there are probably many good reasons why he would not want anyone else to dominate the 'frank and robust' conversations about the Guptas and 'state capture'. By STEPHEN GROOTES.

“The ANC continues to confirm its full faith in our president” is the unassailable resolution of the National Executive Committee of the ANC both in Gwede Mantashe’s words as well as the NEC statement.

You shouldn’t be. What else could have happened in an NEC dominated completely by Zuma’s supporters? The party was always going to have to deal with this in a different manner. However, that doesn’t mean that nothing has happened. As Mantashe stated, when it came to claims about the Gupta family, “Such actions can have no place in the ANC or its government, as they have the potential to undermine and erode the credibility and confidence of our people the leadership of their organisation, the ANC and its government”.

Well, at least the NEC has caught up with the rest of us, then.

But here’s the interesting bit. The NEC has now “mandated the Officials (the top six) and the NWC (National Working Committee) to gather all pertinent information about the allegations to enable the ANC to take appropriate action in this matter”.

The cynics among us may start to mutter here. After all, isn’t the NWC almost more pro-Zuma than the NEC itself? And isn’t Zuma himself, all after, one of the Top Six.

But here’s the fun part:

“The ANC calls on all members who have information to approach the secretary general’s office”. Hmm. Maybe Mantashe hasn’t quite lost this fight, after all.

On the surface, that would seem to make it as safe as he can for people to approach him. But there will no doubt still be concerns for those who have been approached by the Guptas.

There is a growing list of people who we now know can expect to be seen meeting with Mantashe: Vytjie Mentor is one, Mcebisi Jonas of course, former Mining Minister Ngoako Ramatlhodi, and now, as splashed in the Sunday Times, Themba Maseko, a man known to have been honest and admirable in his handling of the incredibly tricky position of Cabinet Spokesperson.

And just in case there was any doubt about the ANC’s displeasure with the Gupta family, check this out:

“In addition, the NEC expressed its most utmost disgust at the arrogance, disrespect and reckless journalism displayed by The New Age newspaper, ANN7 News Channel and representatives of the Gupta-family. They have characterised the ANC as a group of factions for and against President Zuma”.

Outside of the saga around City Press and “The Spear”, it’s hard to think of a moment when the ANC has been so direct against a single media organisation. But it is about much more than that; this is the ANC also talking about “representatives” of the Gupta family, which is surely a reference to the now boringly repeated denials of each and every claim that has come through of their influence as being about “factions in the ANC”. That has got to be annoying, and proof, in case you needed it, that the Guptas play dirty, that they’re using their media channel for propaganda.

Right at the end of the press conference, a question about the capture of the state was asked, and whether “President Jacob Zuma’s relationship with the Gupta family has started that?”.

It’s a question that gets to the heart of it all. Mantashe’s response was that “the reason we have started this investigation is to get concrete statements from people who are affected by it. When we get those a statements, we will actually establish truth from fact. Okay”.

So, we now know that the ANC is worried and has to do something, and be seen to be doing it. The investigation is a good place to start. People like Maseko are not going to suddenly withdraw their claims, they will go through the process. Key to this is whether any more claims will surface. Presumably, considering there is now an official encouragement, there will be more people willing to come forward. And nowhere has there been an admonishment that people must keep quiet. Jonas has actually been praised.

And Mantashe was pretty angry with both the ANC Youth League and the ANC Women’s League. The Youth League’s President Collen Maine has said Jonas should be recalled for going public on his Gupta claim, while Women’s League leader Bathabile Dlamini was reported as saying the Gupta issue should not be discussed because everyone has skeletons in their cupboard. Mantashe is annoyed with both, and said they were “ill-disciplined”.

While of course Zuma and the Guptas (anyone out there need a name for a band?) dominated the press conference, this was a busy NEC meeting, which had some time for other big discussions, some which have a tangential relationship with the main issue.

The NEC also discussed the problems between the Hawks and Finance Minister Pravin Gordhan. In fact, it seems to have come down, officially at least, on Gordhan’s side, saying “The NEC directs that there should be a speedy resolution of the unseemly public spats between the Finance Minister and public agencies”. That surely means the Hawks. But wait Pravin, there’s more: “It affirms it’s full confidence in the Minister of Finance and applauds the work of the President and the Minister to boost confidence in the South African economy, attract investments and avoid further downgrades”.

It would have probably been impossible for Gordhan to ask for more.

The ANC has also said that the NEC “agreed fiscal sustainability remains a priority for South Africa”. It’s hard to know exactly what that may mean politically, but it certainly doesn’t scream support for the nuclear build programme, which is generally judged to be unsustainable spending.

On the local government elections, the NEC has also decided to join the Tlokwe case, involving the Electoral Commission in the Constitutional Court as an amicus curiae. It says it’s worried that many people may not be allowed to vote because of the confusion over the information that the voters’ roll needs to contain. It, presumably, will join the Commission in arguing it should be made as easy as possible for people to vote. Which is, of course, entirely correct.

And, finally, the ANC is coming out of the Soviet era by deciding to announce its candidates for mayor in the metros during an election campaign so that we can enjoy the right of knowing who we are actually voting for in local elections. In the past, the selection process was done after the elections, which meant you never knew who you were going to get.

A final word, on the Gupta issue. It’s a scary thought. If Zuma wins this fight, and is allowed to continue as though nothing happened, with his relationship with the Guptas untouched, what is the implication for the ANC’s 2017 elections? Doesn’t it mean that the people who support him now will support a similar candidate in 2017? Would the party, and South Africa with it, ever be able to break free? DM