When a Q&A is not QED: Zuma’s bombast accompanied by obfuscation 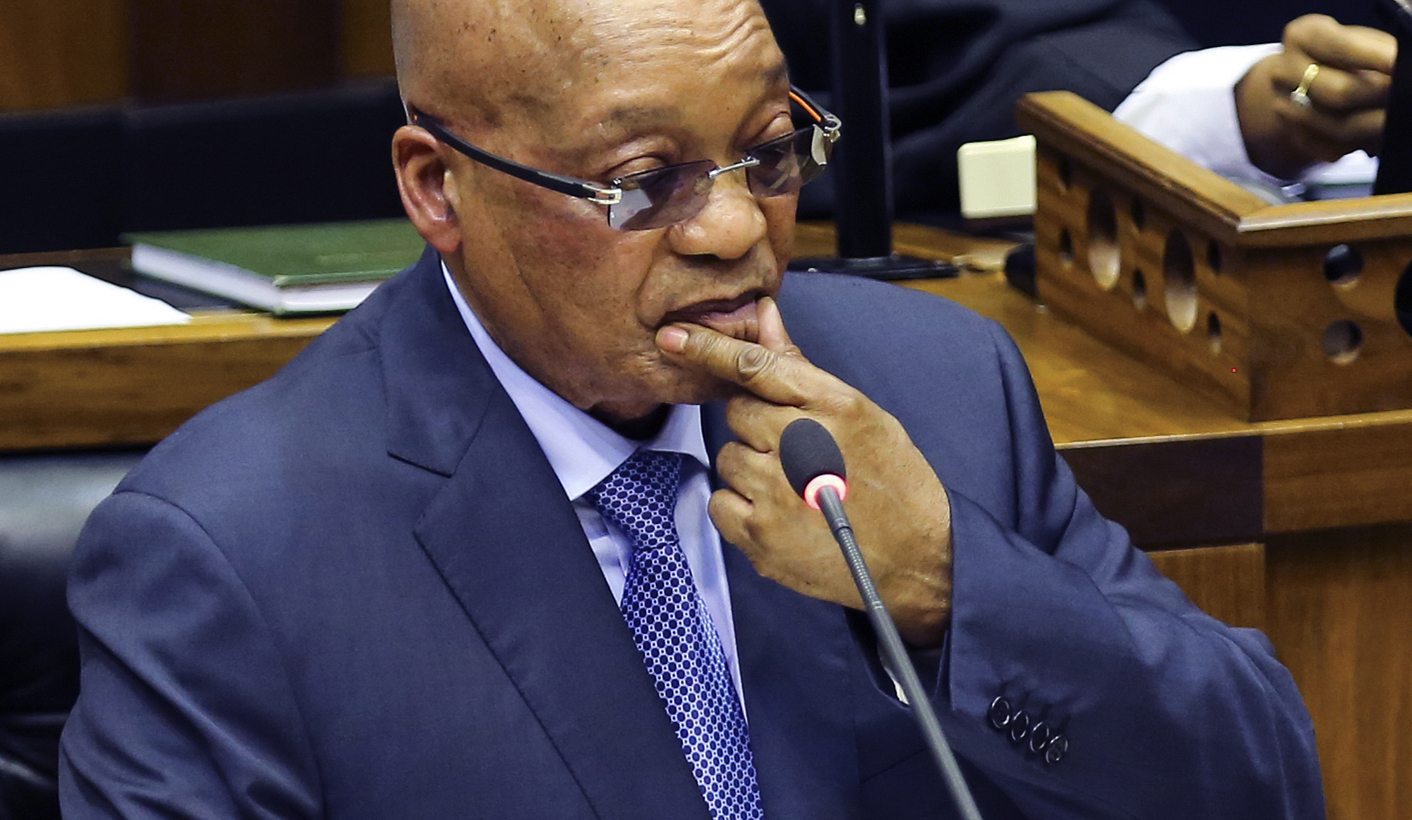 Andingeni ndawo! That was President Jacob Zuma's response, loosely translated as “I don’t enter that” or “don’t drag me into this”, to a request to take the nation into his confidence about what he would do following Finance Deputy Minister Mcebisi Jonas’s public disclosure that the Guptas offered him the finance ministry. The reply to United Democratic Movement (UDM) leader Bantu Holomisa was the hallmark of how the president dealt with the only awkward question in the presidential Q&A in the House on Thursday, the eve of the ANC national executive committee (NEC) meeting. By MARIANNE MERTEN.

In an institution where decorum and proper parliamentary language are revered, Zuma got away with what others don’t. He referred to the finance deputy minister as “Jonas”, not the “Honourable Jonas” as parliamentary decorum and the rules require. No points of order were raised, and Speaker Baleka Mbete did not point out the lapse, even if only to give the president the opportunity to correct himself.

“I appointed Jonas as a deputy minister. That’s what I offered Jonas. I never offered Jonas minister. If he says he was offered (the ministry) by the Guptas, I think you’ll be well placed to ask Jonas or the Guptas. Don’t ask me. I have no business with that, absolutely no business,” said Zuma. “I am in charge of the government. I appoint in terms of the Constitution. There is no minister who is here who was ever appointed by Guptas or anyone else…”

The president was responding to DA leader Mmusi Maimane’s follow-up to his original question as to whether Zuma consulted anyone in the finance ministry musical chairs, 9/12, which wiped out an estimated R170-billion on the markets. The question, according to parliamentary processes, was submitted two weeks ago, but it was more than ever relevant after Wednesday’s public acknowledgement by Jonas that the Guptas had offered him the finance minister’s post even as Nhlanhla Nene was still behind his desk.

Holomisa’s follow-up got short shrift from Zuma, who repeated his earlier reply, adding only that the deputy minister “did not say the president was involved”. IFP MP Sibongile Nkomo similarly failed to solicit details when she asked Zuma to “come clean”.

Zuma refuted National Freedom Party (NFP) MP Ahmed Munzoor Shaik Emam’s assertion that Nene was well regarded, by pointing out that the opposition had criticised him and scored him low. The Economic Freedom Fighters (EFF) were not in the House, after saying there was no value in the presidential question sessions.

Yes, there were replies from the president. But were there answers? The opposition long ago split over the EFF sharp tactics, with the DA and IFP in particular pushing for accountability through parliamentary rules and procedures and sessions such as the presidential Q&A. Thursday’s presidential question time, the first of 2016, put this approach to the test.

“The rand was in trouble before (Nene was dismissed)… It’s not the first time the markets reacted when a minister is put or taken away. The markets have their own temperament,” said Zuma.

“There were reasons why Minister Nene was redeployed. These reasons are reasons of government. These arise out of what government is doing and what (the government) is thinking. If there can be any influence… it can only be the ruling party,” said Zuma, who repeatedly stated it was the Constitution that gave him the power to appoint and fire ministers and deputy ministers.

No one has queried that. The question in the House was clearly as to whether, before that official appointment was made, there were consultations, informal or otherwise, discussions, meetings, chats, or whatever one may want to call it.

Jonas’s disclosure followed Facebook statements by ex-MP, ANC committee chairwoman and caucus chair Vytjie Mentor that she was offered the public enterprises ministry by the Guptas. Former minister, MP and anti-apartheid activist Barbara Hogan has said she came under pressure on how to do her job over a Gupta family-linked airline. This was widely described as a groundswell, a watershed or seminal moment for the governing ANC, both as political party and in government.

Unlike Jonas, Sports Minister Fikile Mbalula has kept shtum over longstanding claims that he was informed by the Guptas about his ministerial post. “It’s not a sport-related question. We are not governed by Guptas… I don’t join a chorus of which I don’t know the conductor,” retorted a visibly annoyed Mbalula at a media briefing on Fifa’s 2010 match-fixing claims an hour before Zuma’s question session. In the House shortly afterwards, he maintained his frown as the president repeatedly outlined his constitutional powers to hire and fire.

“The Constitution does not require me to consult anyone before I appoint or remove a minister or a deputy minister,” said Zuma.

The sports minister was not the only one with a less than happy face. The ministers who attended the session – many were not present by the looks of the empty parliamentary benches– looked serious at best, grim at worst.

Still, the ANC backbenchers earned their salaries. Two ANC MPs said nice things about the government’s track record in follow-up questions and everyone ignored the DA’s EFF-lite behaviour in heckling the presidential response on peace and security in Africa.

But the same ANC backbenchers found their voices as Maimane was told to leave the House in a rapid-fire sequence of instructions by Mbete: they booed the opposition MPs, dismissively waved arms about and some even stood to applaud when the DA walked out.

Zuma was at the podium, laughing.

But the tension was broken. With no EFF, and then no DA, Zuma was assured of an audience, which would not be tjatjarag. The presidential throat-clearing made way for the occasional giggle. Zuma was visibly more relaxed. He spoke at length in English, isiZulu and isiXhosa, responding to the questioner’s language of choice, except the Freedom Front Plus’s Afrikaans.

“I am intervening on the question… I am addressing the issue. It is being attended to by the president and the relevant structures,” said Zuma. It came in response to a question from the Freedom Front Plus on how the president was resolving tensions between Finance Minister Pravin Gordhan and South African Revenue Service (SARS) commissioner Tom Moyane, who laid the complaint over the so-called “rogue unit” the Hawks are investigating.

In response to IFP MP Liezl van der Merwe’s request for an undertaking ANC officials would not offer social grants in the run-up to the elections, Zuma said people often send requests for aid. “I don’t know this process should be stopped because of elections. How are they going to vote – hungry? Must I say ‘Don’t’? Me? Whilst people are hungry?” said Zuma.

On free higher education, IFP MP Mkhuleko Hlengwa was told of the current commission of inquiry looking at this. The ANC was driving free education for the poorest of the poor, said Zuma: “Must the child of the president get free education?”

Yes, there were replies. But answers in the interest of governance accountability and transparency? Thursday’s presidential question session showed how much parliamentary rules and procedures depend on willingness not only to adhere to the letter of the rule or tradition, but also the spirit.

Staying on message that the Constitution gives only the president the powers to hire and fire – and that’s what he did – Zuma distanced himself from Jonas’s public statement made in the interest of “good governance, abiding by the Constitution of our country and being accountable to our people, who repeatedly express their confidence and trust in us, election after election”.

Thursday’s put-down of Jonas, referred to without the traditional “Honourable” or even as deputy minister, is obvious to anyone with eyes to see. As so often in Parliament, it’s all between the lines. What happens next will not take place in Parliament. That will happen at the St George’s Hotel near Tshwane where the ANC NEC meets.

But at least one person expressed satisfaction: “That concludes the business of the day and the House is adjourned happily,” said Mbete, who as ANC national chairwoman will sit at the top table reserved for the governing party’s top six officials this weekend. DM

Photo: South African President Jacob Zuma reacts during a question and answer session in Parliament in Cape Town, South Africa, 17 March 2016. Embattled South African president Zuma is facing increased political pressure from all quarters as questions were raised about his relationship with the Gupta family alleged to be heavily influencing his decisions. EPA/SUMAYA HISHAM.